And (for me, at least) all roads in Rome lead to gelato. Oh, gelato, how I love thee. Behold this vision of deliciousness: 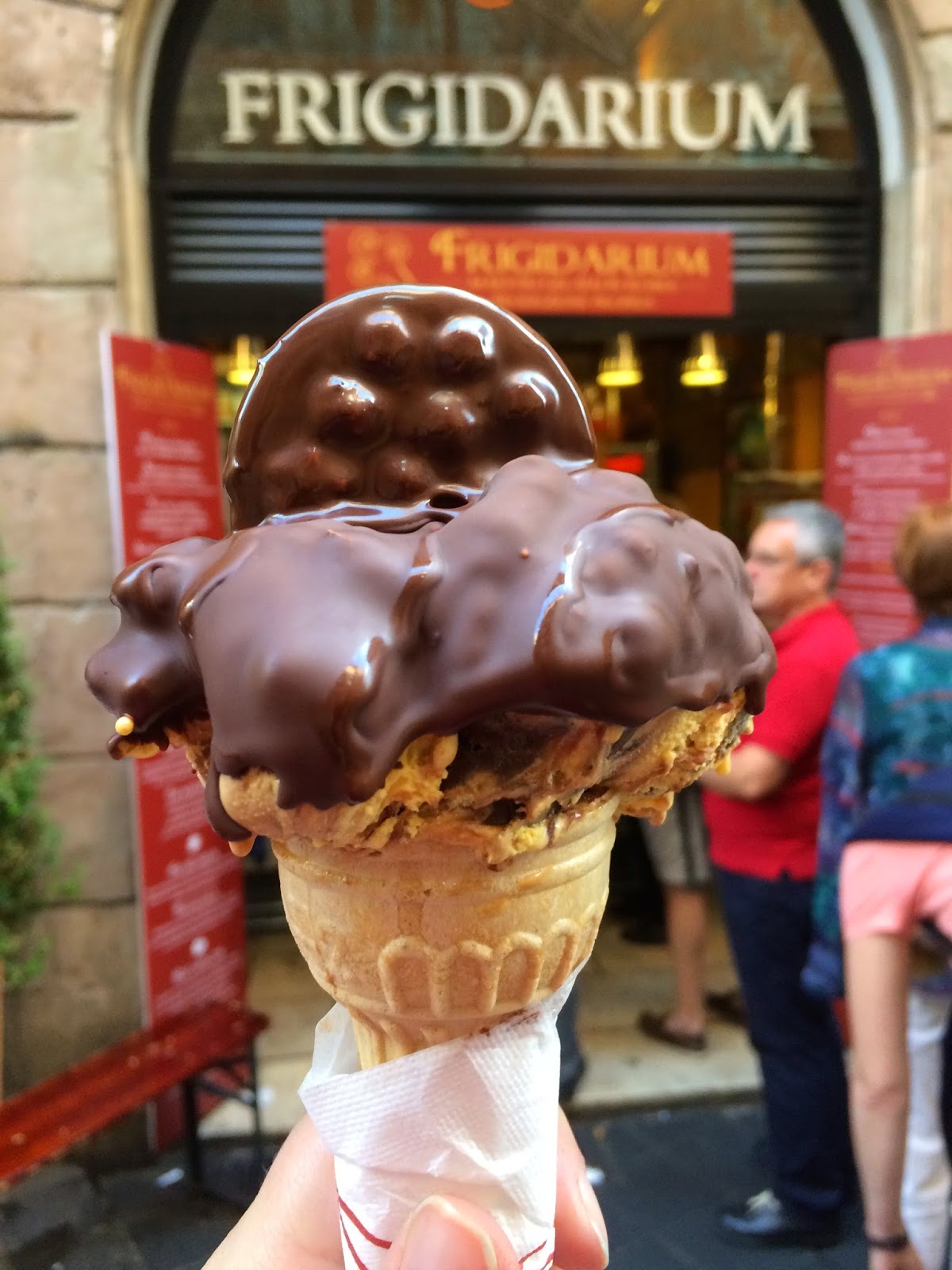 I admit, without hesitation or shame, that this photo is the current wallpaper on my phone. And that I gaze at it with adoration and longing at least three or four times a day.
Before we left for Rome, I had a list of about five or six gelaterie that I wanted to try. I had also made myself the promise that I was going to be adventurous and try different flavors that I had been reading about: carrot, sage and raspberry, ricotta and fig…just to name a few. I am fairly adventurous food-wise, but the most radical flavor of gelato I had ever tried (and loved, by the way) was caramelized fig. Delicious!
Anyway, our first night in Rome, we went to Gelateria del Teatro, which was not too far from our apartment, located on Via dei Coronari. This gelateria is well-reviewed and for good reason. All their gelato is fresh and made on the premises (side note: always get gelato from places that say “artiginale”, which basically means it’s made in house with quality, fresh ingredients). Here’s a peek in their window at some of the ingredients just sitting there, waiting patiently to be gelato-ized. 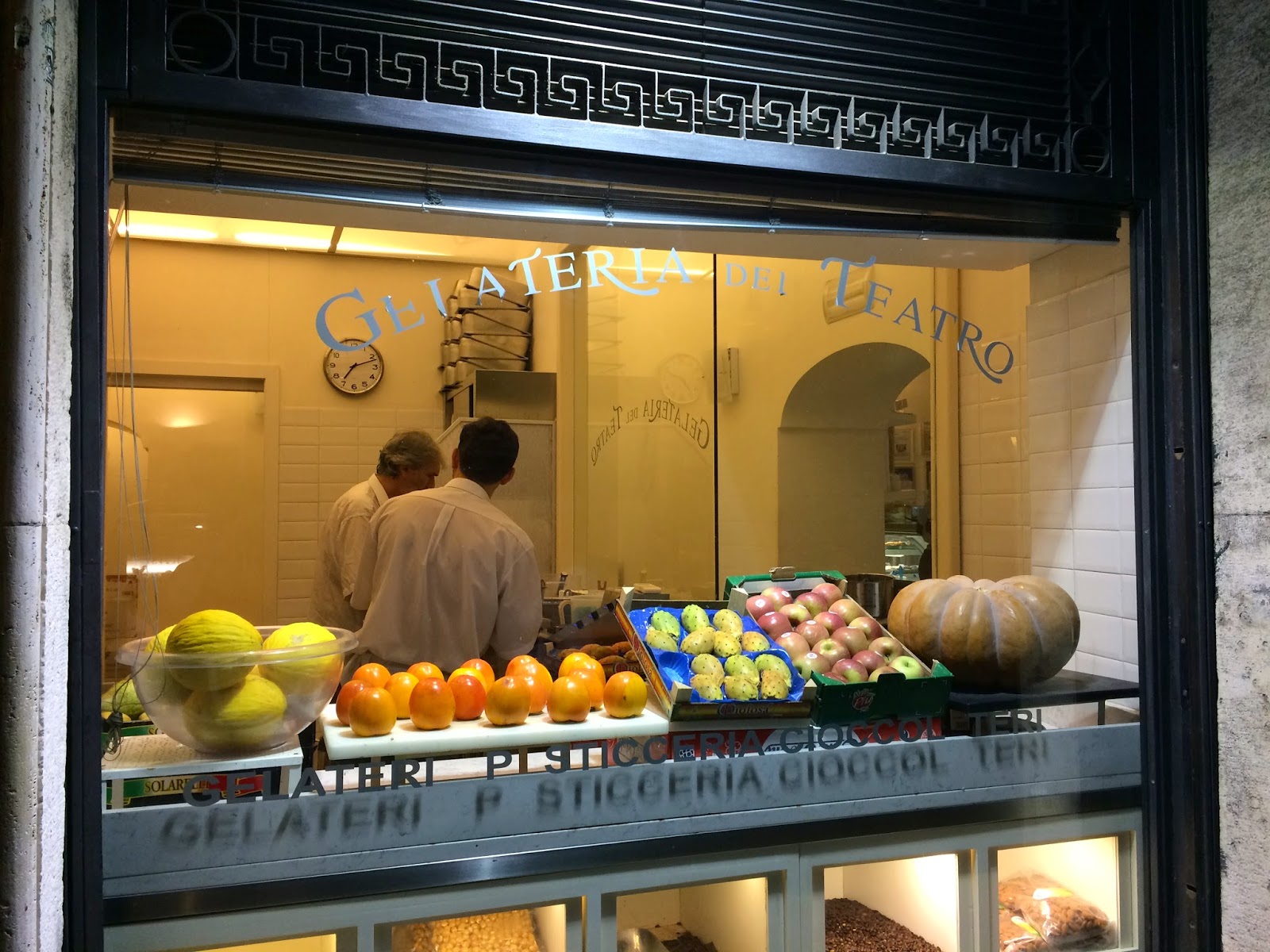 In the past, when we’ve visited Rome it has been in November, which is officially “off season”. Let me tell you, I will never go any earlier than November again. Going even just a few weeks earlier this time, it was so much more crowded than we’ve ever experienced (except for the time I went in May, which I also will never do again). The reason why I mention this is to explain why I didn’t end up ordering any of the adventurous flavors I intended to at this place. The line was not very long, but the problem was that everyone in front of us was standing right up against the case where all the flavors were displayed…and nobody would move so we could read what they were.

When your number is called to place your order, you really can’t mess around. You’ve got to know what you want and tell them. So I ended up getting flustered and ordering two of the flavors that I could actually see: caramelized pear and cinnamon apple. Not really what I wanted, but they were both very good. My mom got a scoop of the raspberry sage, which was excellent.

The weather was great, so we ate outside in a quaint little alcove:

The gelato was delicious, and I intended to return when it was less crowded and I could better peruse the selection. However, that never happened. Why, you ask? Well, because we came across Frigidarium…and, my friends, there was no going back.

The first time we went there was on our second day in Rome. It is located on Via del Governo Vecchio, which was no more than a 90 second walk from our apartment (I’ll talk about the apartment – pros and cons – in much more detail in a future post). It’s a very tiny place – there’s barely room to walk in and order – and there was always a line. There are probably only about 12 different flavors to choose from, and they are mostly flavors you will find in all gelaterie (except for their signature flavor, which I will discuss with love in a little while). On that first visit, I stuck with two of my favorites: crema and pistachio. The cost is only 2 Euros a scoop and they will dip it in white or dark chocolate, or put panna (whipped cream) and a wafer cookie on top at no charge. I got mine dipped, of course.

The gelato was excellent and incredibly inexpensive for the amount you get. Many other places charge 5 or 6 Euros a scoop and give you much less. As I was standing on the little street savoring every bite, I knew that next time I was going to order their signature flavor, aptly named “Frigidarium”.

Did you know that when you are in Italy, gelato is actually like a multi-vitamin? You must have (at least) one every day for optimal health and happiness. That’s what my doctor told me…or maybe it was the voices in my head. Either way, I listened. And every day (except for one, and trust me, I rue that day) we went back to Frigidarium and I got their signature flavor. I had no idea what the flavor was when I ordered it, I just knew I wanted it.
Later, after wiping all the chocolate off my face, I looked online to find the description, it says it’s a mix of chocolate and vanilla with pieces of cookie. Trust me, they forgot to list an ingredient, and that ingredient is “magic”. (Or maybe it’s crack, because I was definitely addicted.)  To simply say that it’s chocolate and vanilla is selling it short. Really. You’ve just got to take my word for it and try it. I’m going to post the picture again because I haven’t looked at my phone for a while…
We never did make it to any other gelateria. So I guess I have to go back to Rome again so I can try all those other flavors I was intending to. Or maybe I’ll just go back to Frigidarium…

Do you have a favorite gelato place in Rome? What’s the most “original” flavor you’ve tried? Please share in the comments below!