My love affair with Italy is complete and set in stone (marble, of course). But if we ever had a fight and some other country tried to make a move on me in a moment of weakness – Spain would totally have a chance. More specifically, I would absolutely explore my options with Barcelona (shhhh….don’t tell Rome).

As the capital of the north-east region of Spain known as Catalonia, Barcelona is simply magical. It is rich with art, culture, delicious food and friendly people. It actually reminds me a lot of Italy with its markets and placas – and maybe that’s partially because it was originally founded as a Roman city (although that was a really, really long time ago…as in B.C.).

We spent three days there, and I feel like we barely scratched the surface. And even though it was only three days…I can’t cover it all (Tapas! Gaudi! La Rambla!) in just one post. So for episode one of what we’ll call “Barcelona: Because Italy and I Were On A Break”, I’m going to hit you with a general overview of my fling with the city. 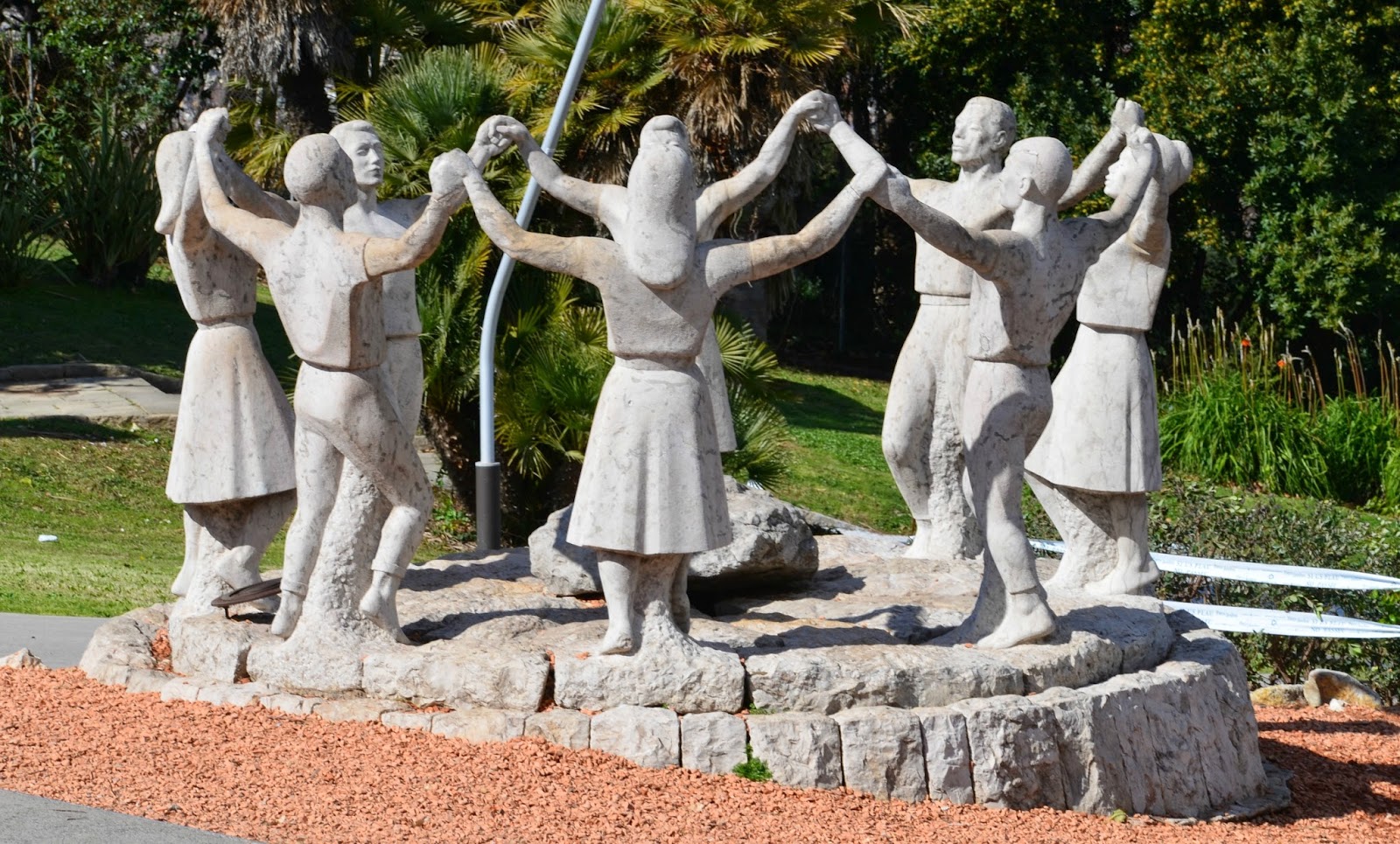 The picture above is a sculpture found on Montjuic that represents the Sardana, a traditional dance that is a symbol of national unity and pride for the Catalans.
I mention this because even though Barcelona is in Spain, many of the people of Barcelona are fighting for their independence from Spain and want Catalonia to be recognized as its own nation. When we were visiting, there were many demonstrations (all peaceful) taking place, and the picture below (the flag of Spain along with the flag representing Catalan pro-independence) was a very common sight to see: 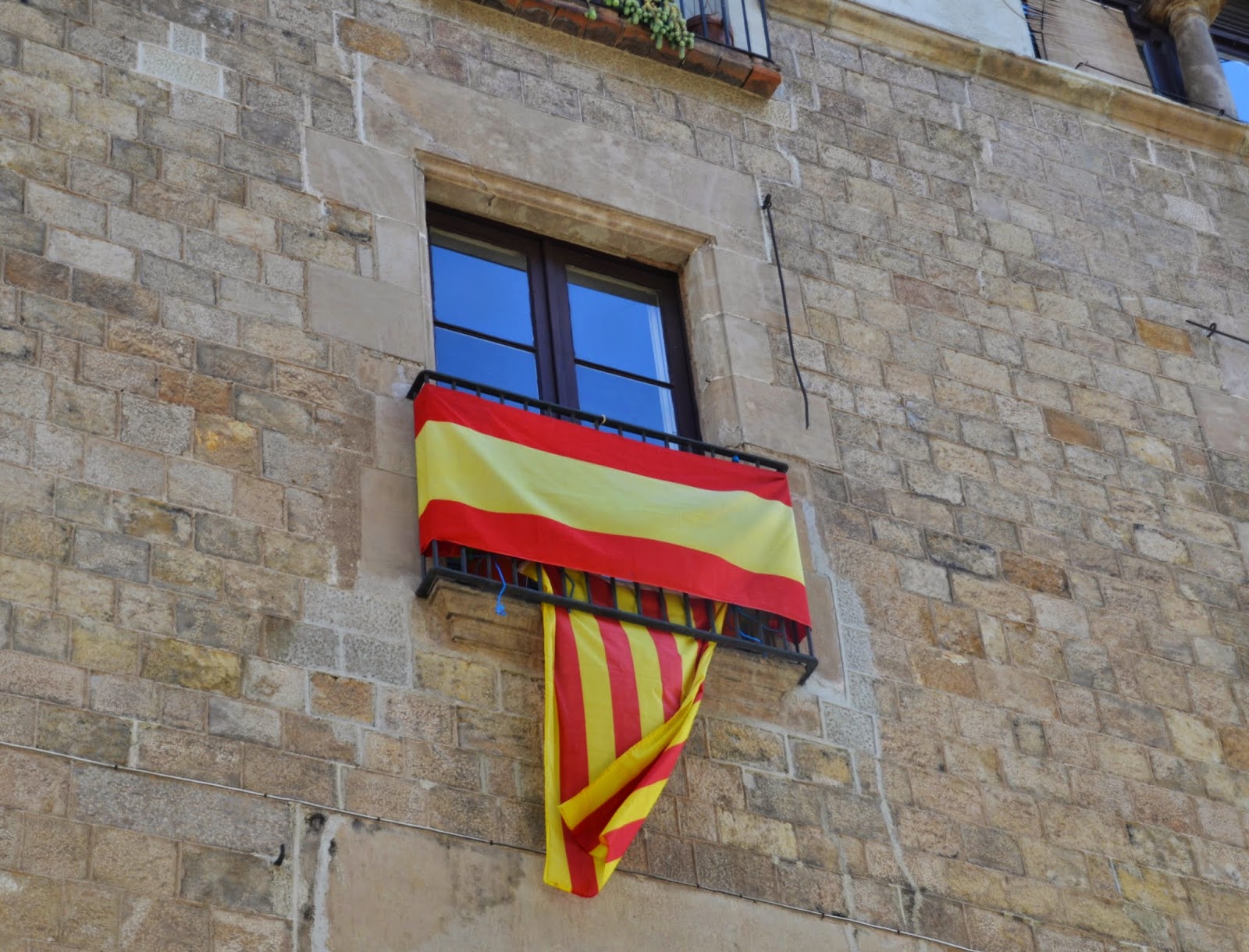 This was one of many such displays all around the city, but this one was near our hotel, the Catalonia Catedral – which was a really great hotel. We chose it because it was centrally located in the Barri Gotic (Gothic Quarter) just steps away from La Seu Catedral and about a five minute walk to La Rambla. Considering the great location, it wasn’t very expensive at all. We got Superior Rooms just to have a little extra space, and the nightly rate was still under 200 euros (I think around 180…we were there in March). The hotel was modern, very clean, the staff was helpful, the rooms were large and the beds comfortable. In the picture below, the entrance is just to the left of “Desigual”. 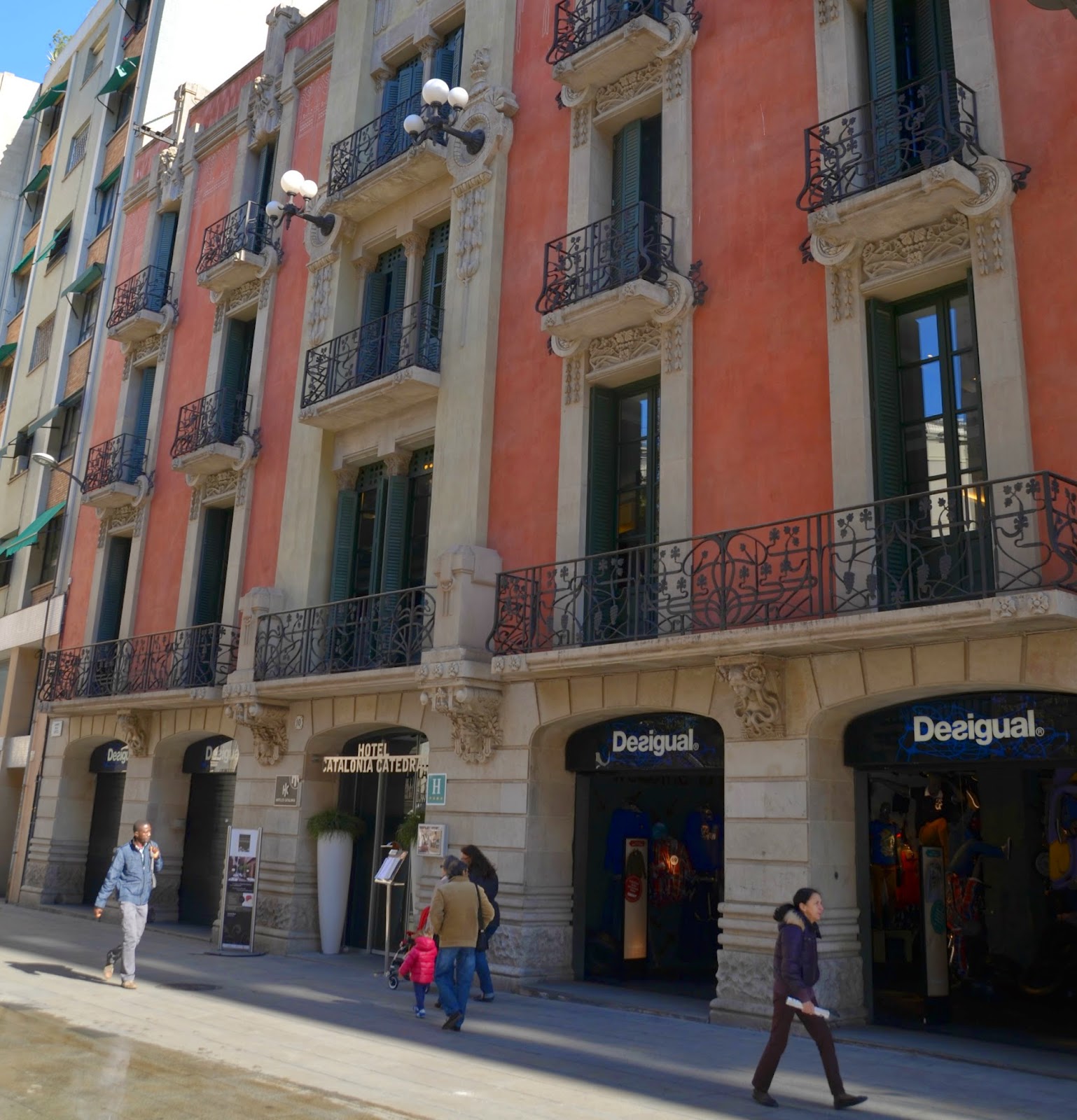 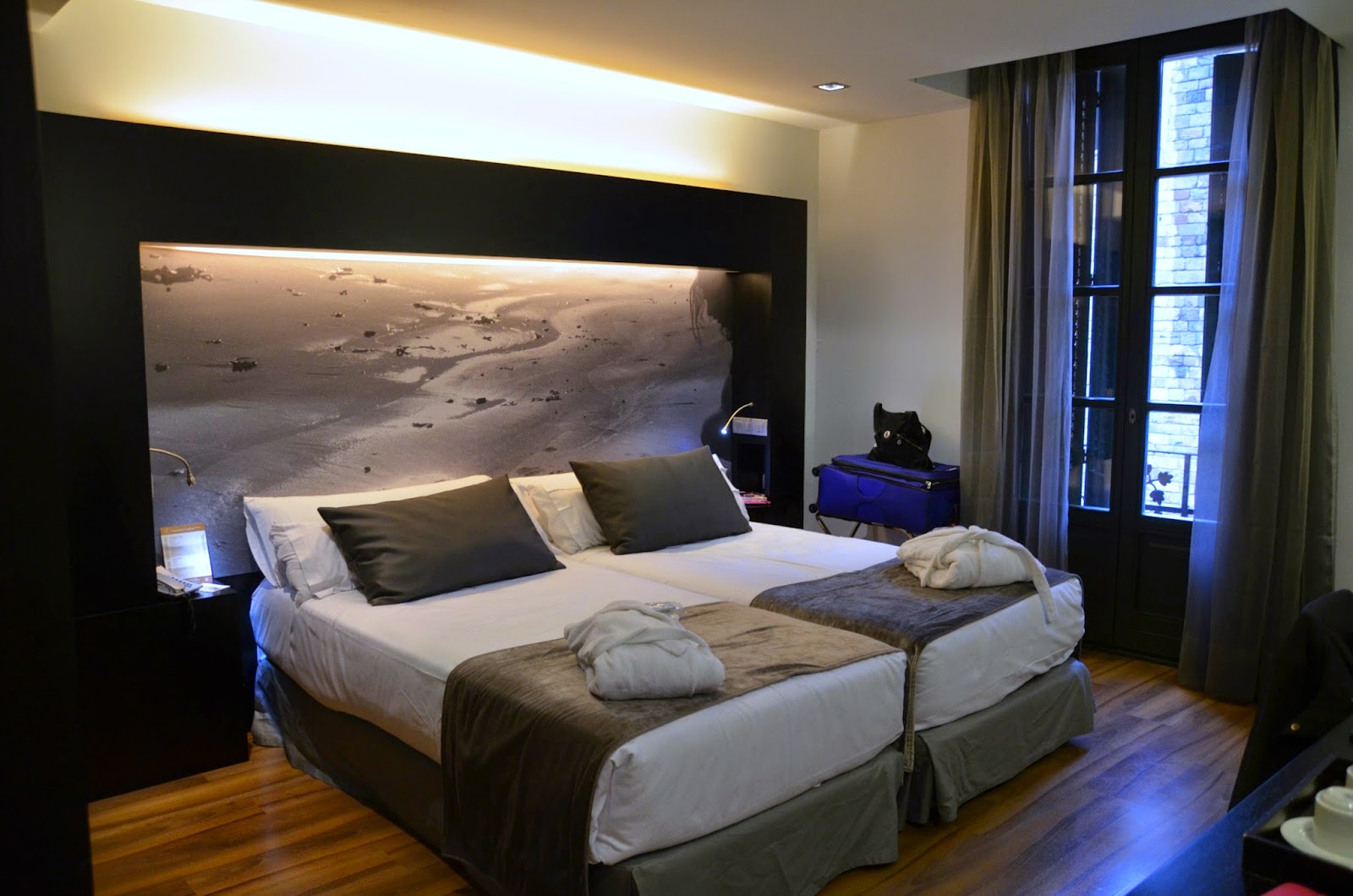 The hotel also has a restaurant, bar and a rooftop swimming pool. The only thing that I will mention that I found odd about the rooms is that the bathroom doors are glass. They are lightly frosted, but you can still sort of see in. I just thought that was weird. I mean, if you are traveling with a spouse or family, it’s likely not a big deal, but if you and a friend decide to save money and share a room, it could be slightly awkward depending on the depth of your friendship. If you don’t mind that they can see your silhouette when you’re sitting on the toilet, you’ll be just fine.
The area around the hotel is awesome and very easy to get around on foot. Tons of little side streets filled with shops selling one-of-a-kind jewelry, shoes, clothes, Spanish olive oil and spices, and, of course, touristy knick-knacks as well. My mom and I both bought pieces of silver jewelry (me a bracelet and her a ring) and they are both some of our favorite things we’ve ever gotten in Europe. The area has plenty of good cafes and restaurants as well (I will cover a few of our favorites in upcoming posts).
A pleasant five-minute walk from the hotel (though it took much longer due to our frequent shopping stops) is: 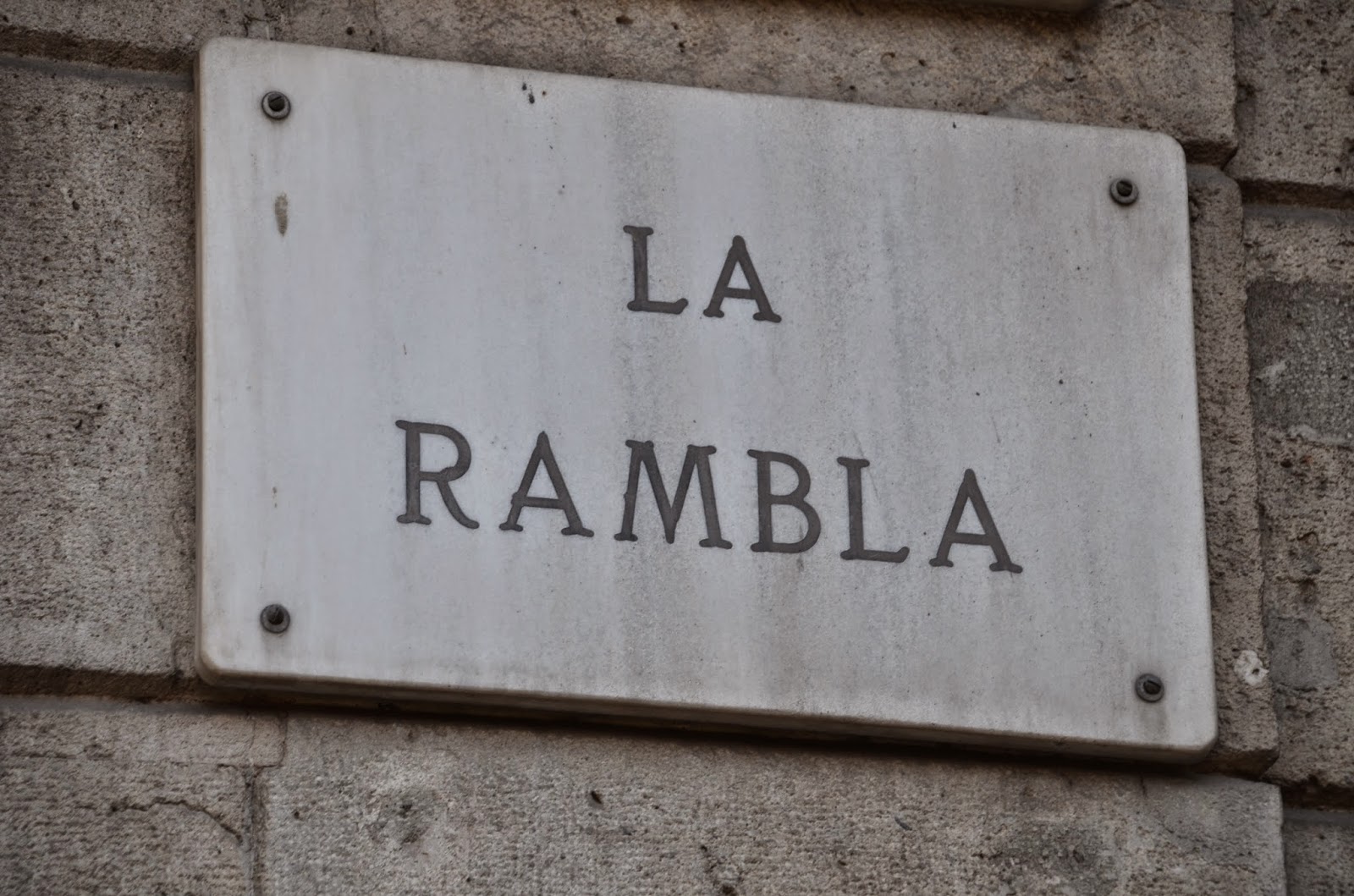 If you are looking into visiting Barcelona, you will undoubtedly hear/read that La Rambla is where tons of thieves and pickpockets hang out and that you will likely be mugged. Please do not be scared or put-off of visiting if you hear things like that. Pickpockets and thieves are everywhere…Rome, London, Barcelona, Chicago, Los Angeles, etc. Just be aware of your surroundings at all times and don’t do foolish things like put your purse on the ground while you are shopping/dining/taking pictures. Men shouldn’t keep wallets in their back pockets. Don’t flash wads of cash. Really, just be aware, be alert…but go and enjoy the experience! Never once did we feel as if we were in danger. 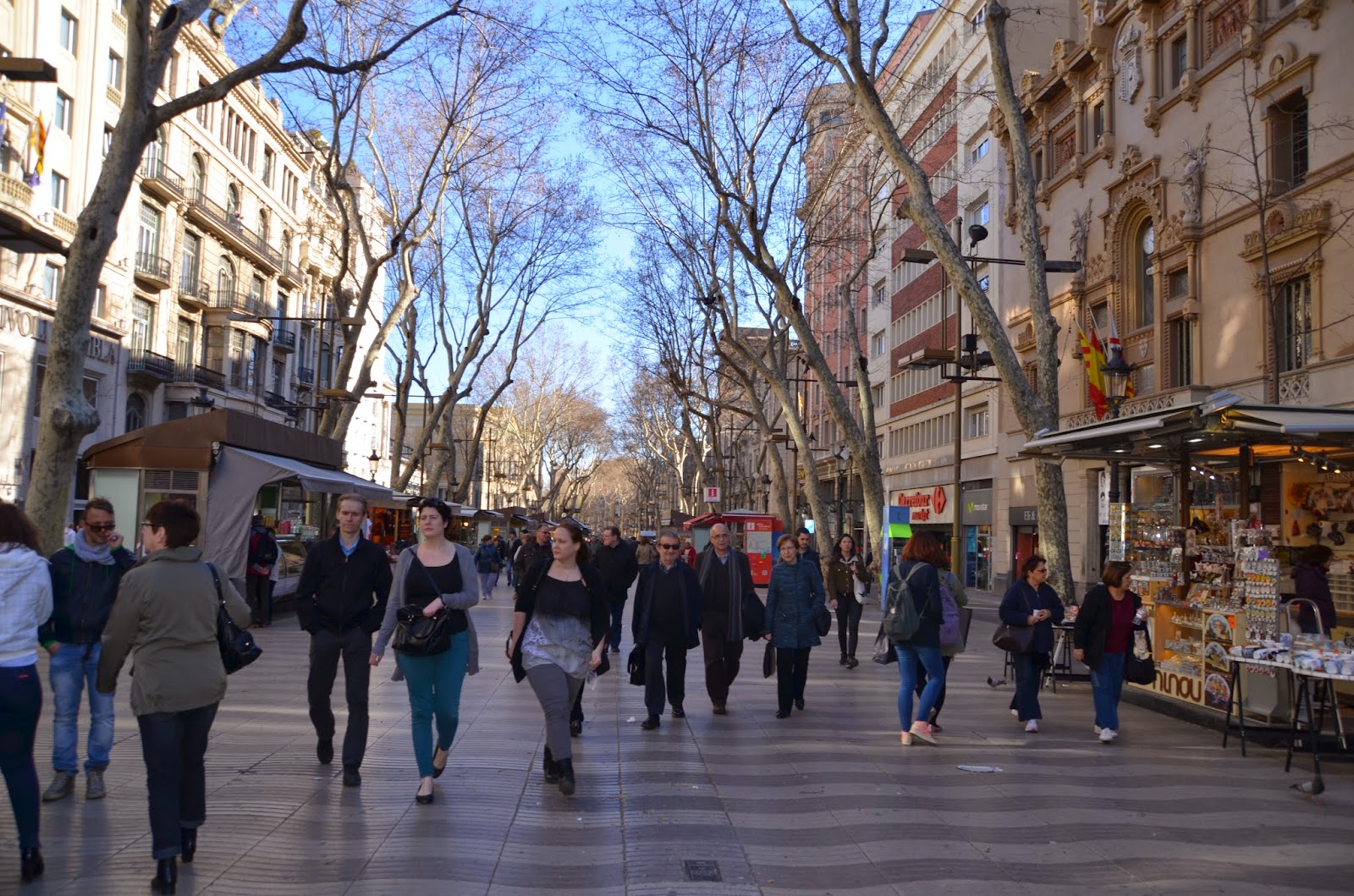 If you walk all the way down La Rambla toward the Columbus Monument, you’ll get to the port. We never made it that far on foot, but did drive through the area during a day trip we took (I will also do a separate post on that) and it looked like a fun and interesting place to visit.
If you are in the Barri Gotic area, you should definitely visit the Catedral. Construction on this stunning Gothic cathedral was begun in 1298 and took over 150 years to complete. Over three million visitors per year enjoy its beauty. 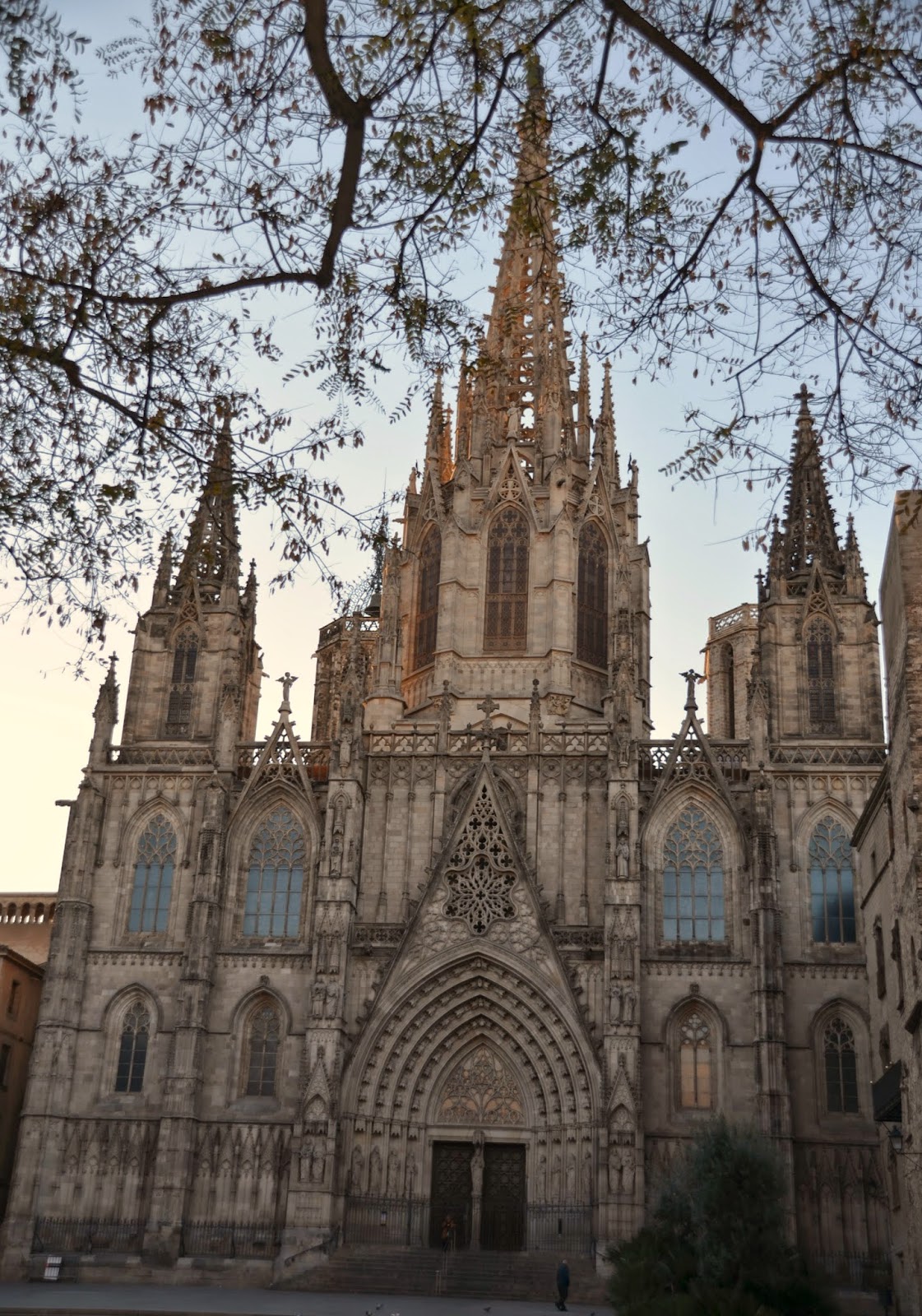 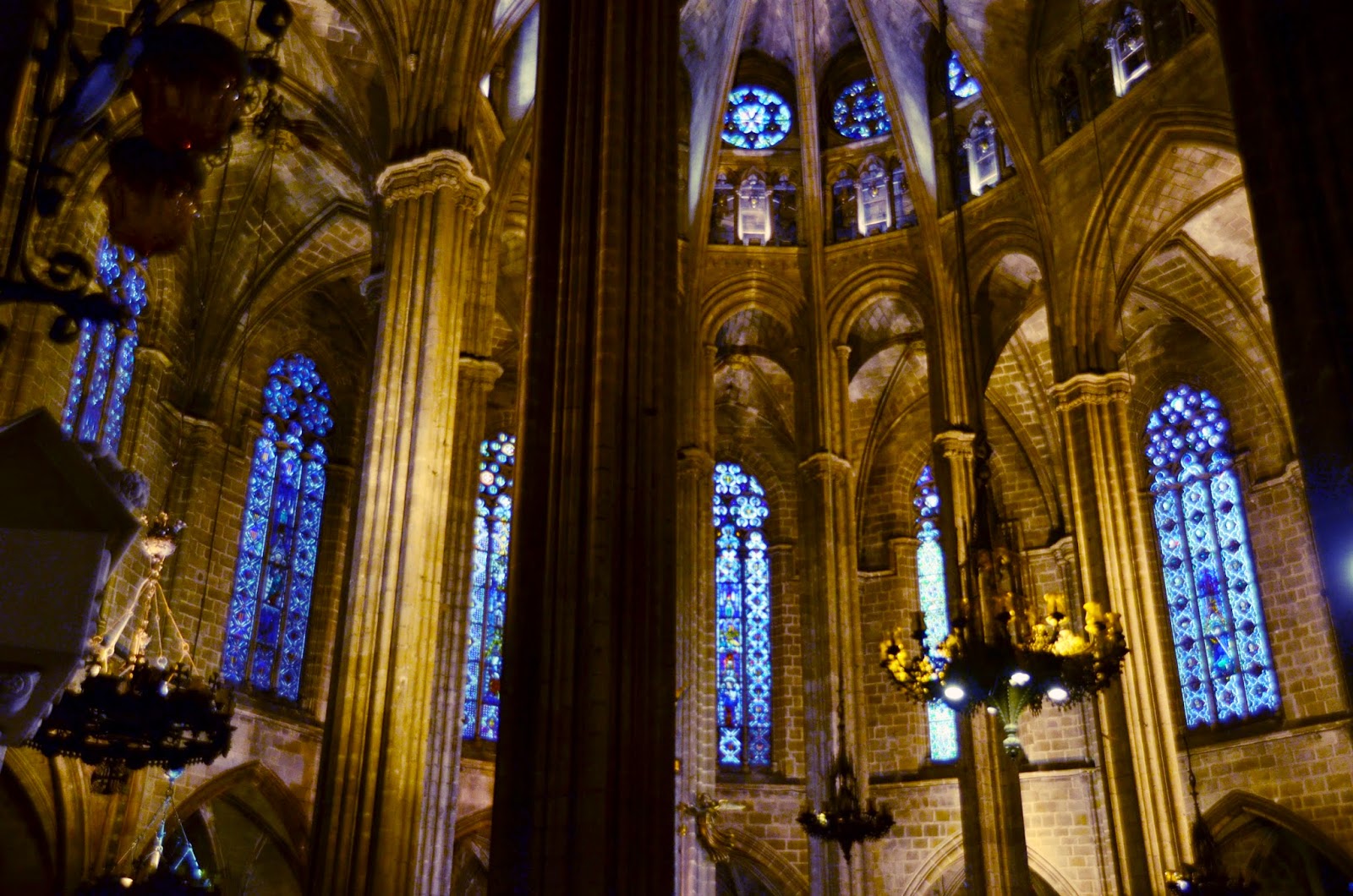 I’ll end this post by sharing a cool experience we had while we were walking past the cathedral on the way to dinner one night. We were just starting to approach the placa in front of the cathedral when, all of a sudden, the cathedral bells started ringing. We soon realized that we could hear bells ringing from other directions as well. After looking around in confusion for a minute, we heard a couple of locals walking past and saying something about “el Papa”. We realized that a new pope had been elected and the bells were being rung at all the cathedrals around the city in celebration. It was a neat experience that I know I will always remember.
ASIDE: We were on our way to eat at an Argentinian steak house, and although we didn’t know it yet, we would soon be told by our waiter the new Pope was from Argentina. Coincidence?? I think not so. END OF ASIDE.
My next post (coming Wednesday) will be about the day trip we took with Pepito Tours and how we went gaga for Gaudi.
Have you been to Barcelona? Did you love it? Share your experiences (or feel free to ask questions) in the comments below!