Okay, my fellow Americans (and possibly my lovely Canadian neighbors), say it with me: “KAH-pree”. One more time….all together now: “KAH-pree”. Like me, unless you’re Italian, you’ve probably been saying it wrong your whole lives (as in: “kuh-PREE”, like the pants). But however you pronounce it, one thing is for sure – this phenomenally gorgeous island located just off the Amalfi Coast should definitely be on your travel bucket list! 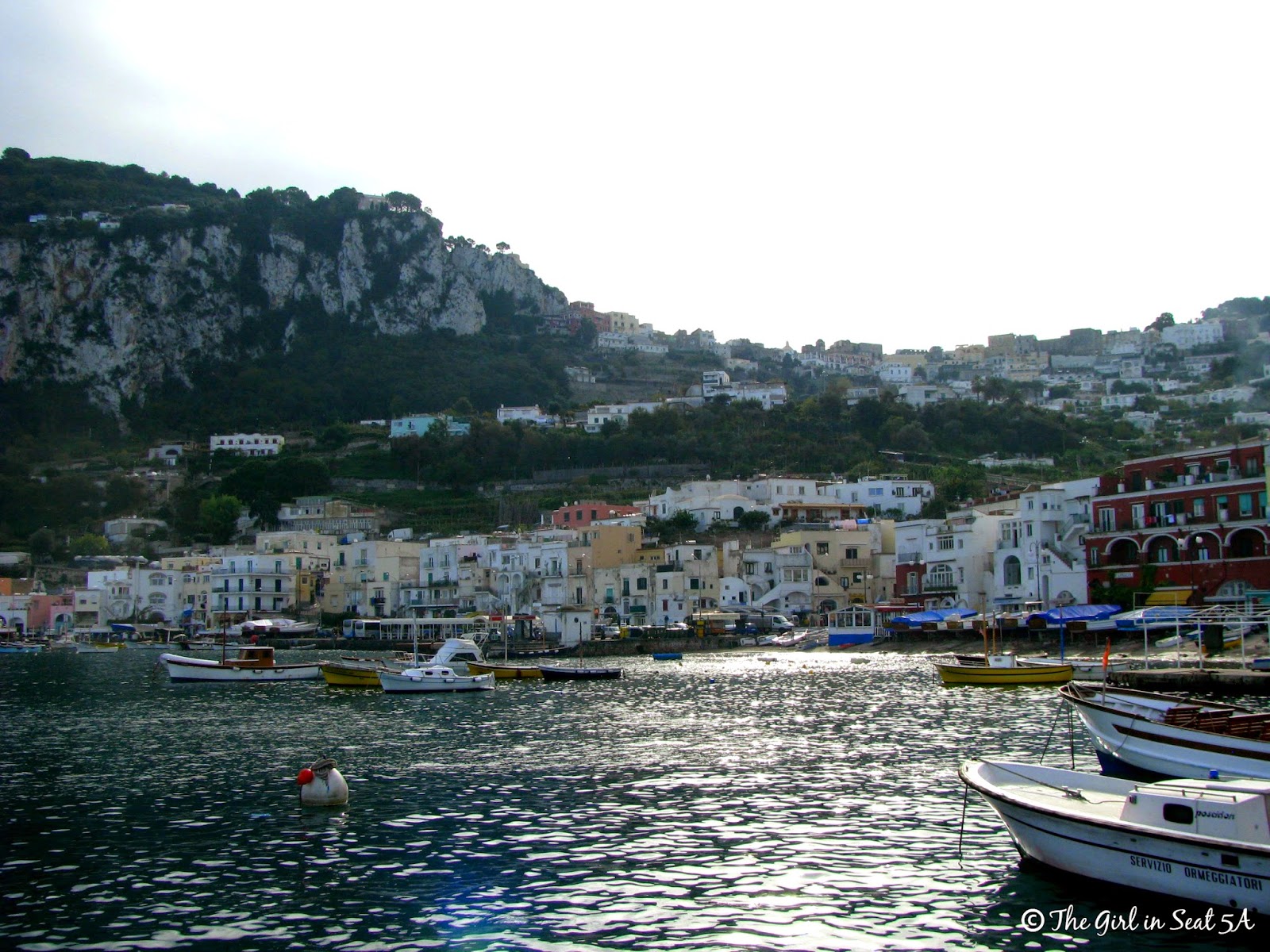 People that are very prone to seasickness may be better off with the slower-moving ferry, but the hydrofoil didn’t bother me at all (the seasickness didn’t come until one ill-advised boat ride later). Once you arrive on the isle, you can either take a bus, taxi or the funiculare up to the main area of Capri.

We all had our hearts set on taking a boat ride around the island. Upon arrival at Marina Grande in Capri, however, we were very disappointed to find out that tours (both for trips around the island and for visiting the Blue Grotto) were not running due to rough waters. We commiserated with a few other Americans we had met on the hydrofoil who also intended to take boat trips, but then decided to buy tickets for the funiculare and head up to Capri town.
Just as we were about to get them, a gentleman approached our group and said he could take us on a boat tour around the island. We questioned the fact that the other companies said it was too rough and he said it was no problem, they were just being “too cautious”.
So, all the silly Americans had a quick sidebar discussion on whether or not we were being foolish and gullible tourists (for me, the answer ended up being “yes”), but we decided to take a chance anyway. After settling on a price, we hopped into the boat and off we went.
For a while, I was able to thoroughly enjoy the trip. Capri is so beautiful when viewed from the water, which is an amazing, almost unreal color blue. All the grottoes and rock formations were completely awesome. 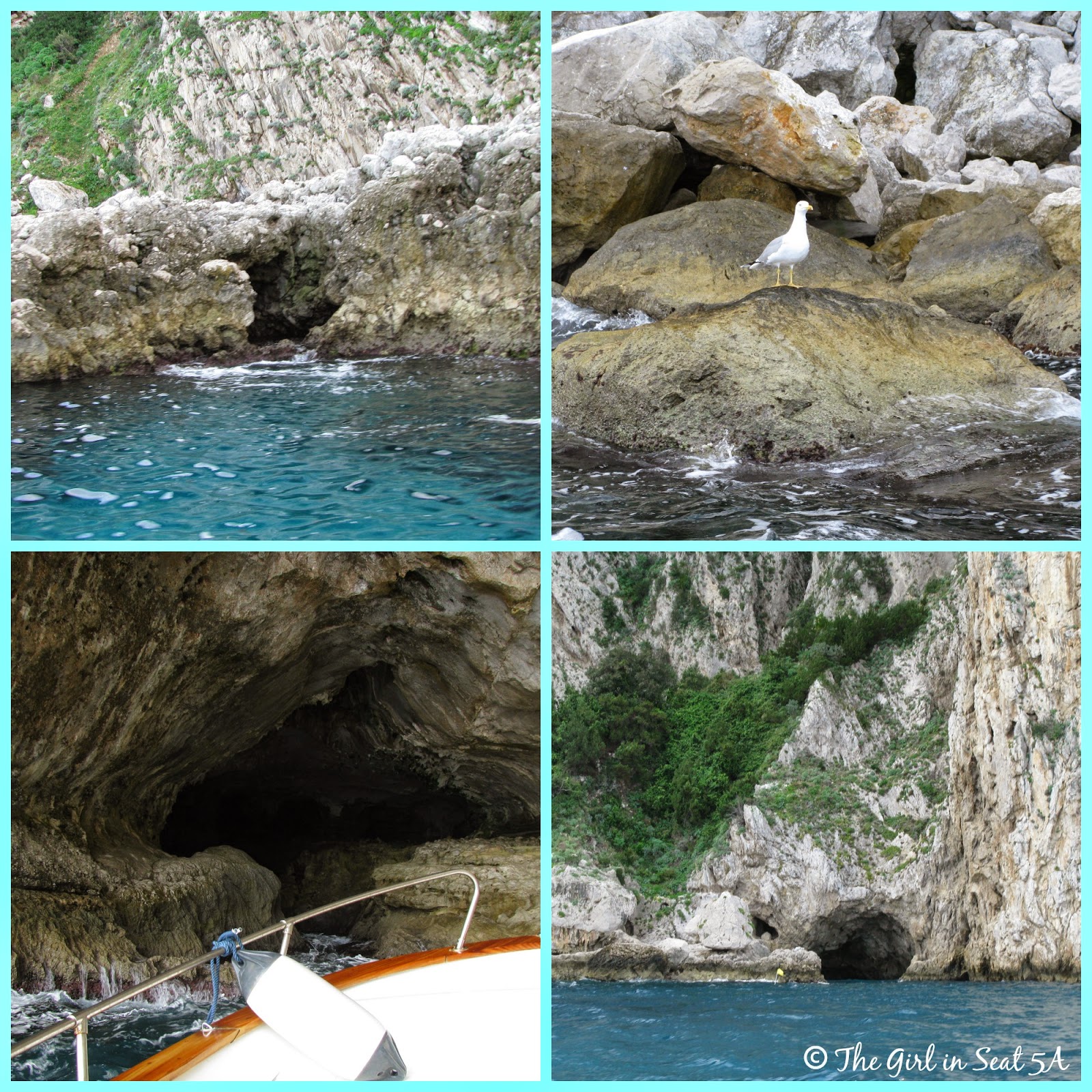 My whole life, boating and being on or near the water has been one of my favorite activities. The only time I ever got seasick was when I went on a cruise to the Bahamas a week after a hurricane, so the waters were abnormally rough. At any rate, while setting off on this cruise around Capri, I really didn’t think I had anything to worry about, especially with my trusty Reliefband (mentioned in my last post). I think we all know where this is going, right?

About a quarter of the way around the island, things started getting really bad for me. I cranked up my Reliefband to the highest setting, and it did nothing. Pretty soon, I couldn’t even look around…I was so nauseous I just had to stare down at my sweaty hands clenched in my lap. All I wanted was to get back on solid ground.
Through sheer force of will (and an absolute aversion to barfing in front of strangers) I was able to make it to the halfway point around the island and even snapped a quick picture as we headed through the famous Faraglioni rock formations. 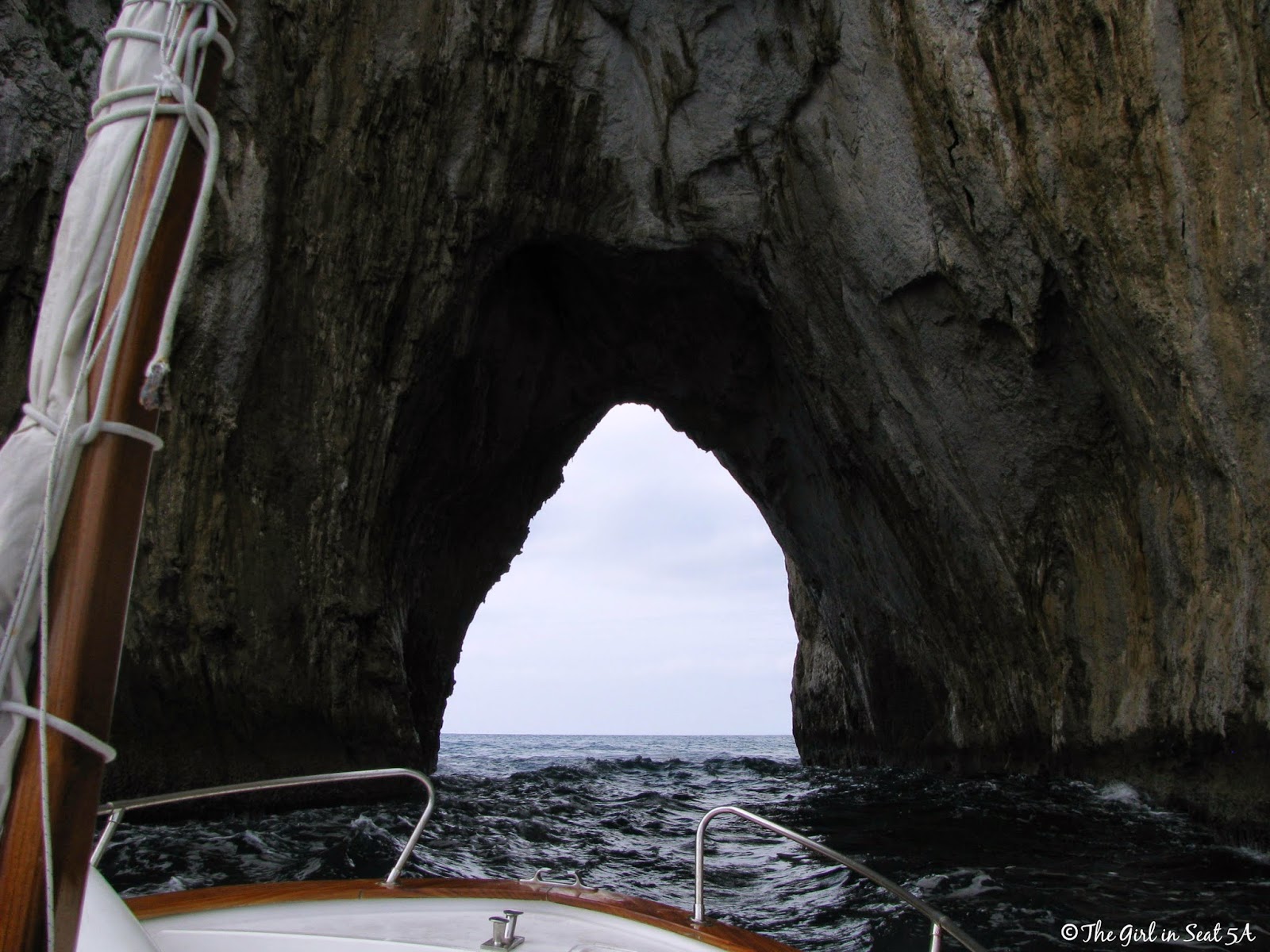 These stunning formations tower an average of 100 meters above the water’s surface and are named Stella, di Mezzo and di Fuori (also known as Scopolo).
Even though nobody else got sick like I did, we all got out of the boat at Marina Piccola, which is where I took this picture, after kissing the ground beneath my feet. This photo is completely unfiltered…the water is really that beautiful. 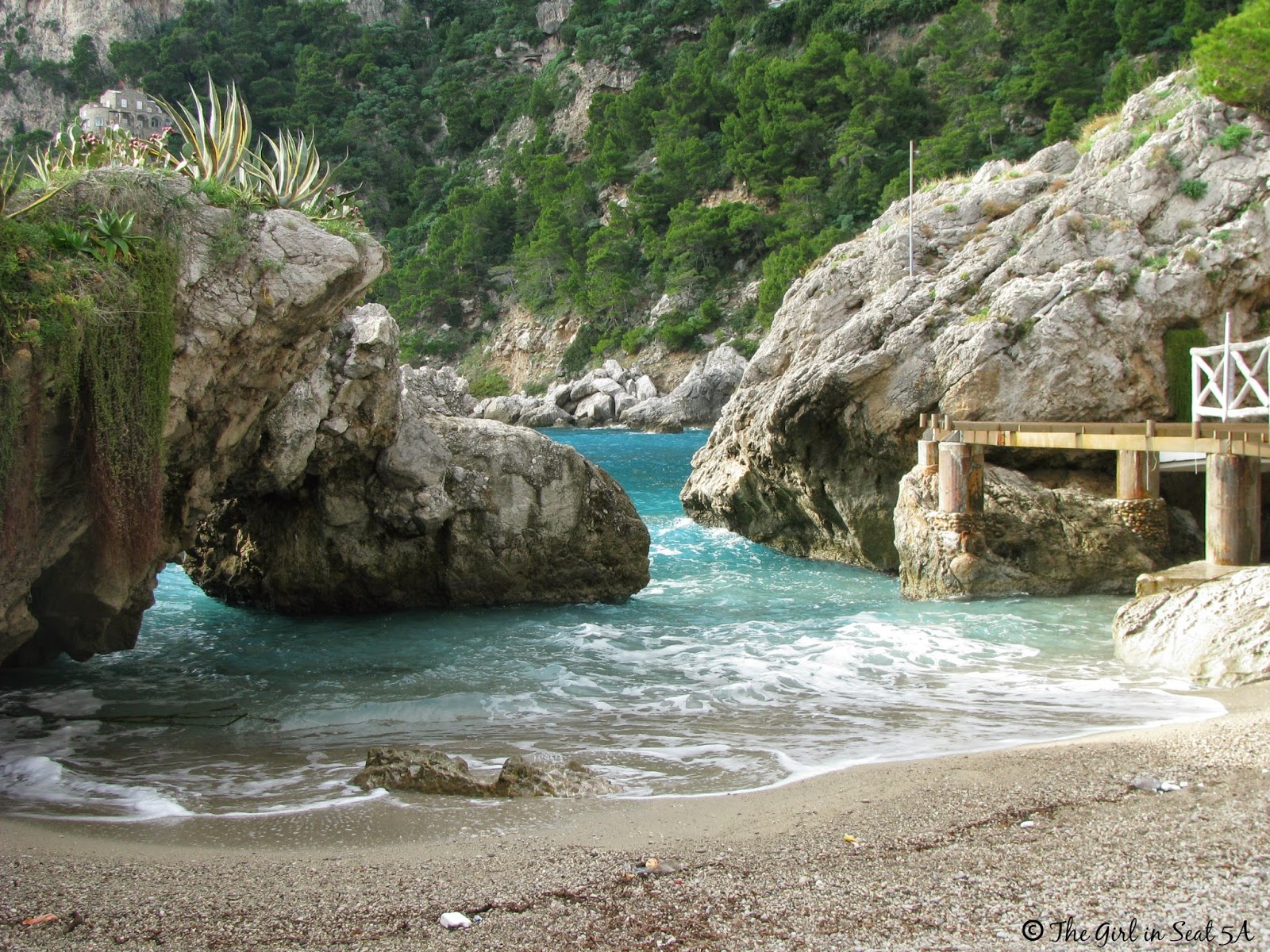 So, please learn from my mistake – if none of the official boat tour companies are operating due to rough waters, don’t get in a boat with a renegade captain!!

We then took the public bus up to the Piazza in Capri, where I headed straight to a bench and just sat there for about an hour trying not to throw up on my shoes. While I was recuperating, everyone else did some shopping. There are tons of stores, from little souvenir shops to very upscale boutiques.
When I was feeling halfway human again, we took an open-top taxi to Anacapri. 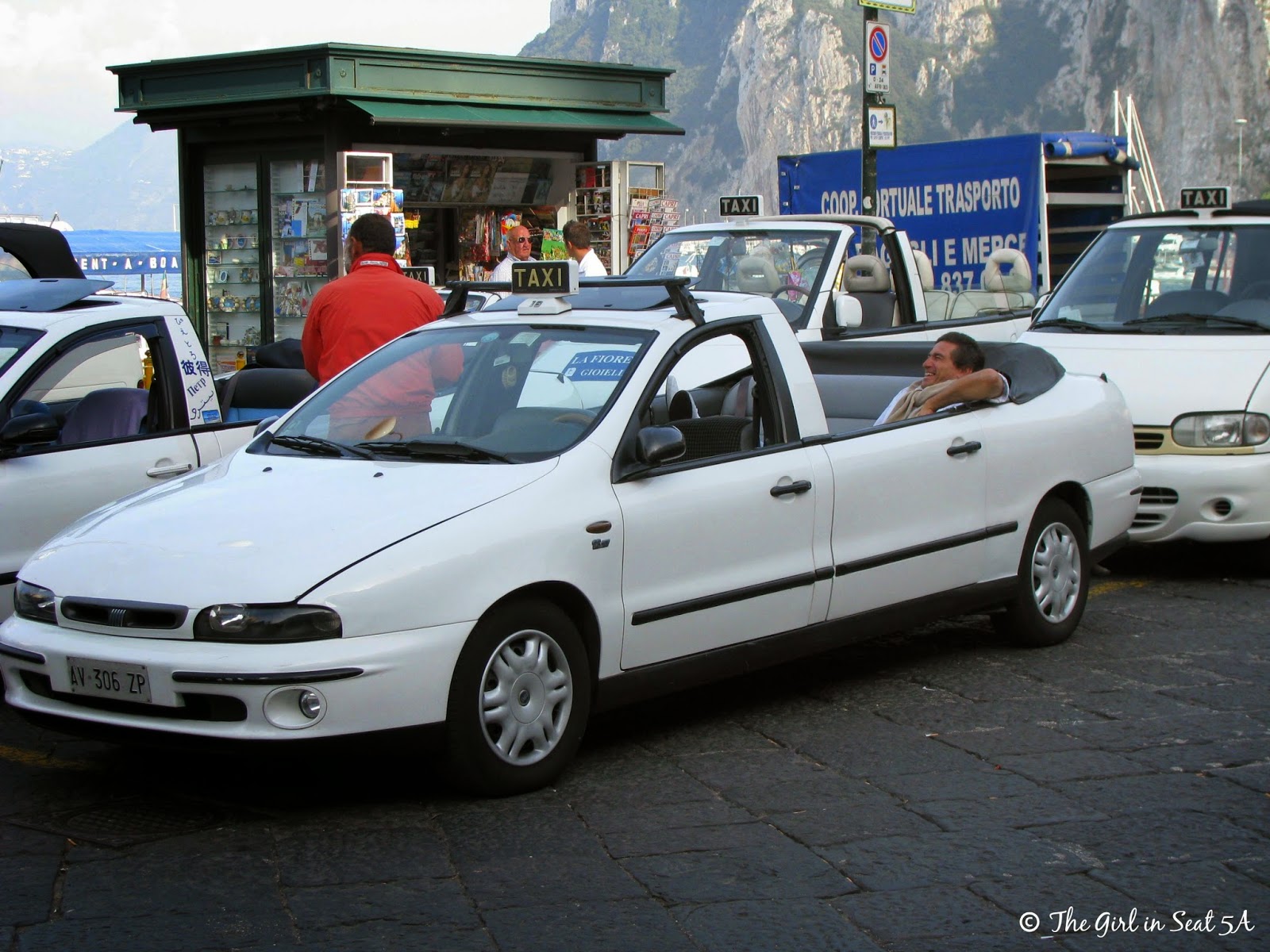 A suggestion to my fit and adventurous readers – you can actually get to Anacapri from Marina Grande by climbing the Phoenician Steps. Constructed by the Ancient Greeks between the 7th and 6th centuries B.C. (but fully restored in 1998), this staircase is composed of 921 steps and offers absolutely gorgeous views along the way. Had I been feeling better, I definitely would have climbed them (hahahahaha….NOT). 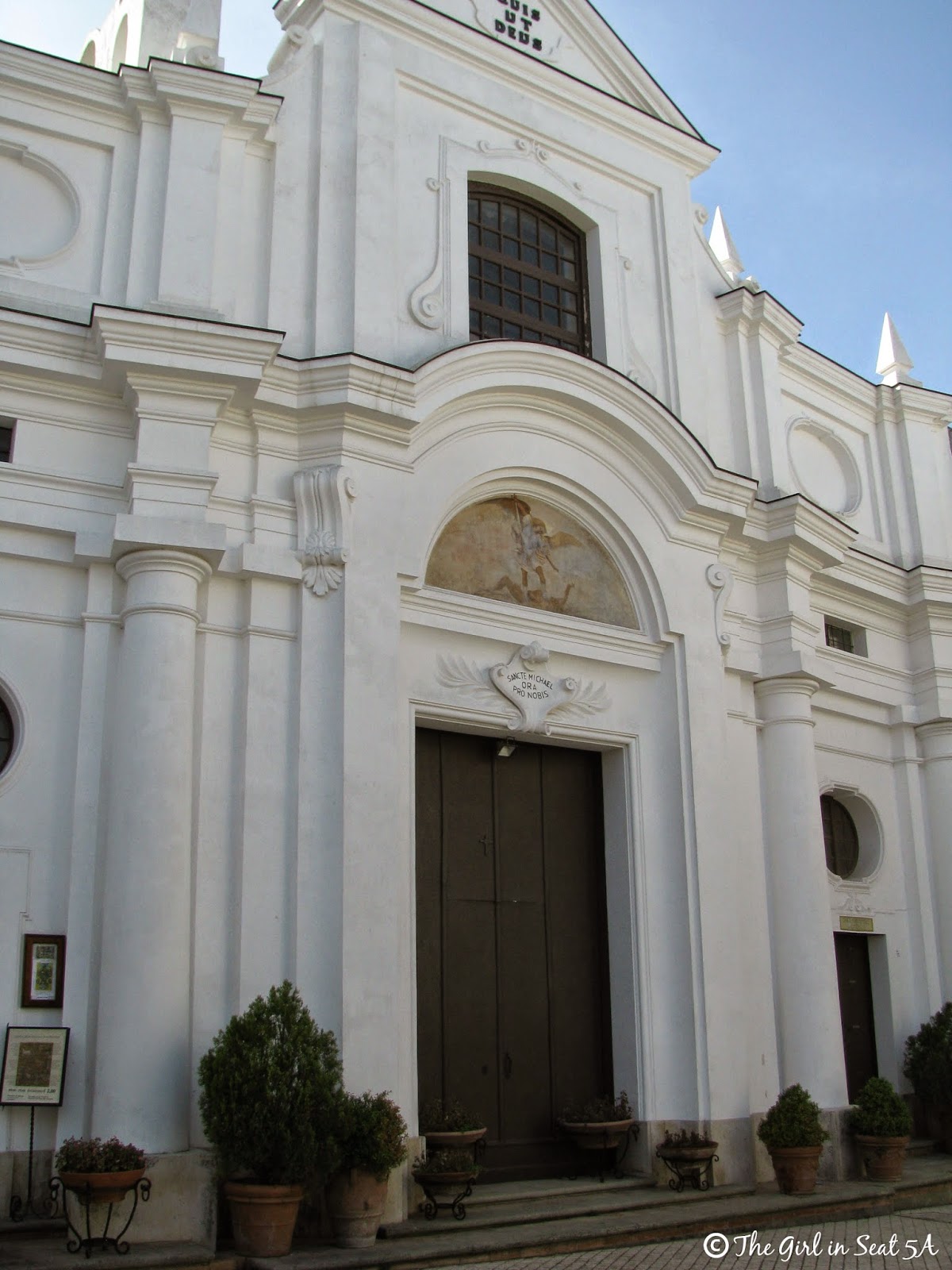 Yet as soon as you enter the nave of the church, you will see an amazing, hand-painted ceramic tiled floor. The floor, created by Leonardo Chiaiese in 1761, depicts the biblical story of Adam and Eve being kicked out of the Garden of Eden. 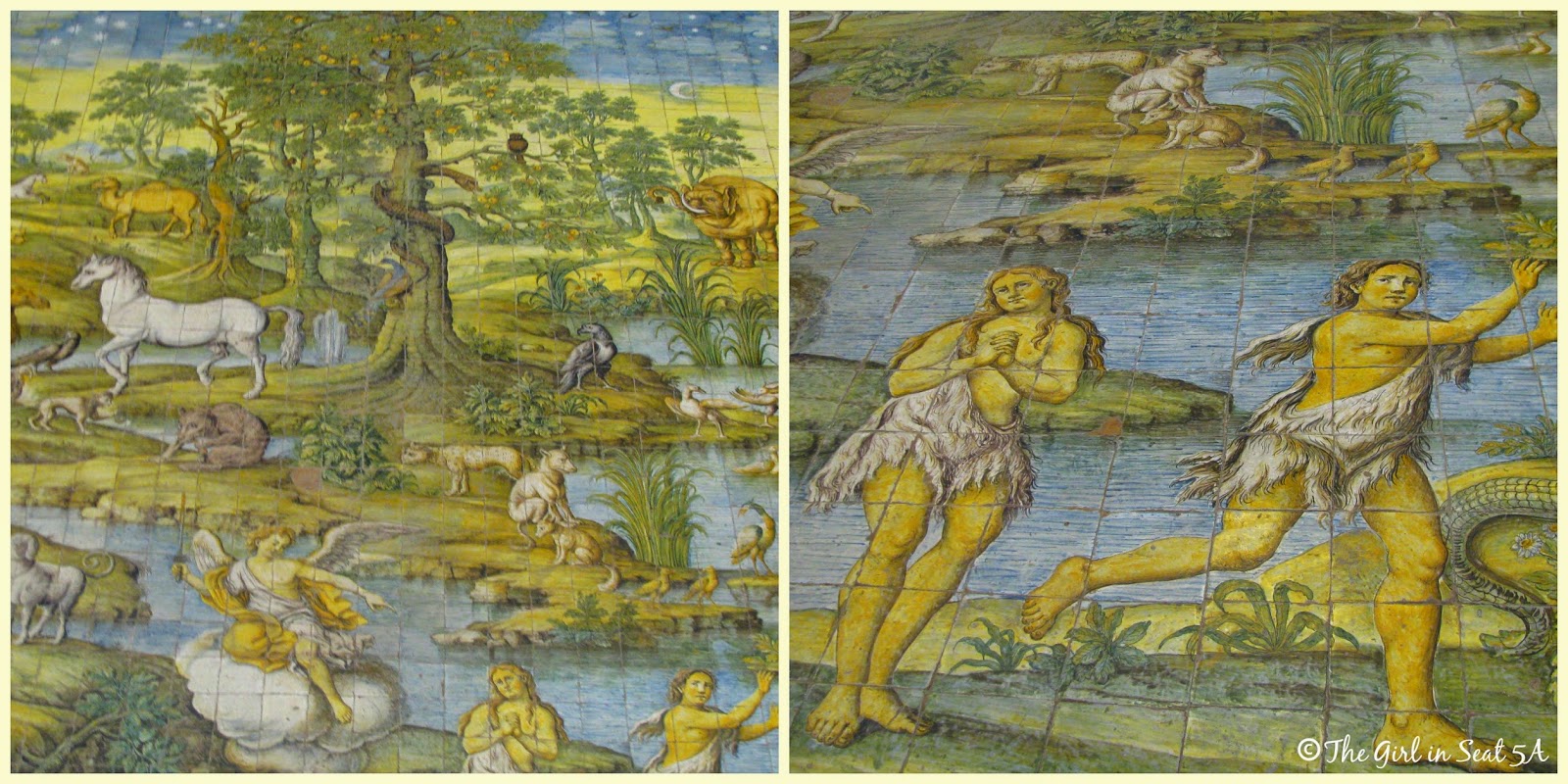 It is beautifully preserved because they do not allow anyone to walk on it. Instead, there is a small wooden walkway that allows you to walk all the way around it, admiring the details of the tiles and peeking into the side altars around the church. 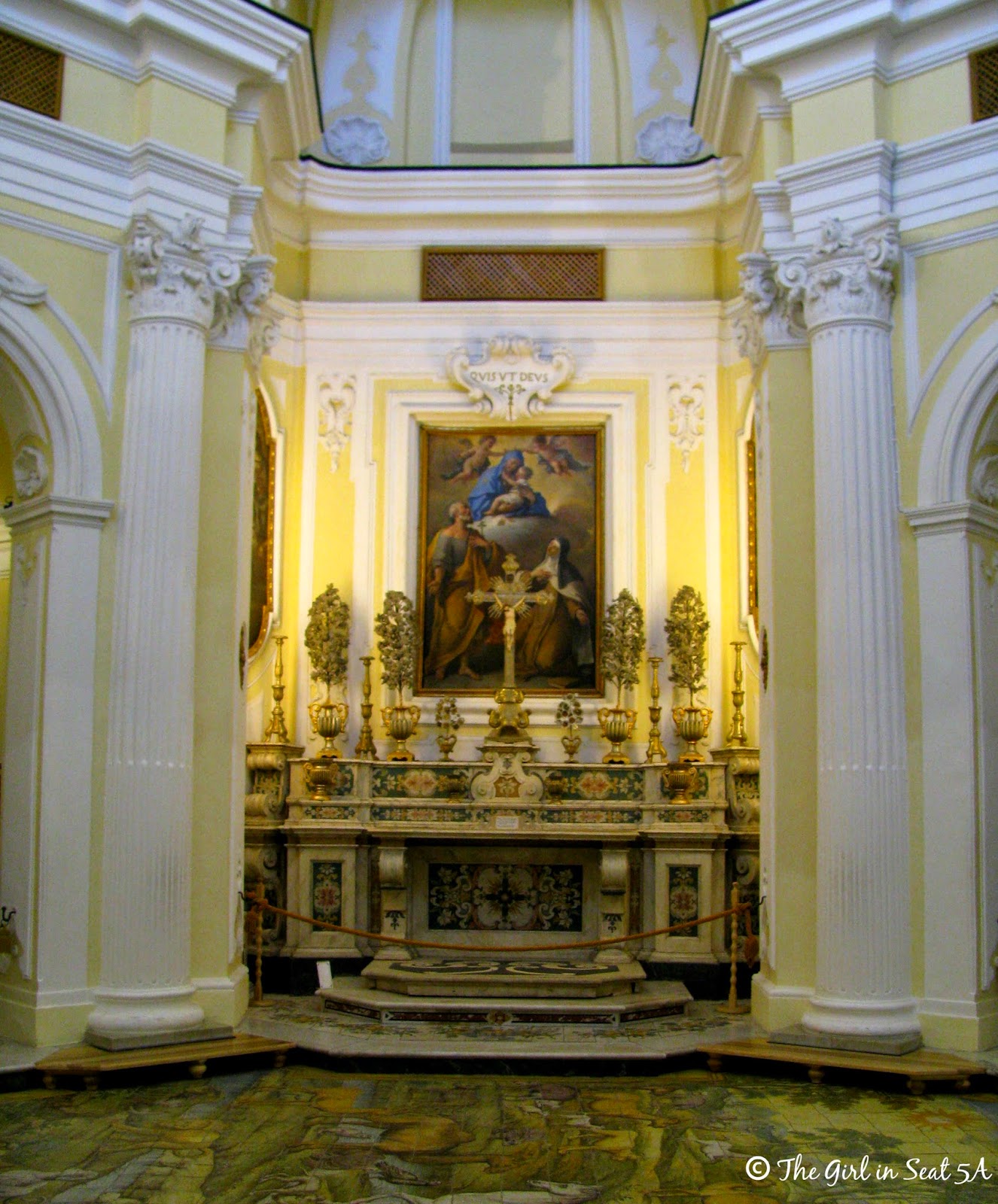 For a great view of the scene as a whole, climb the spiral staircase to the organ loft. 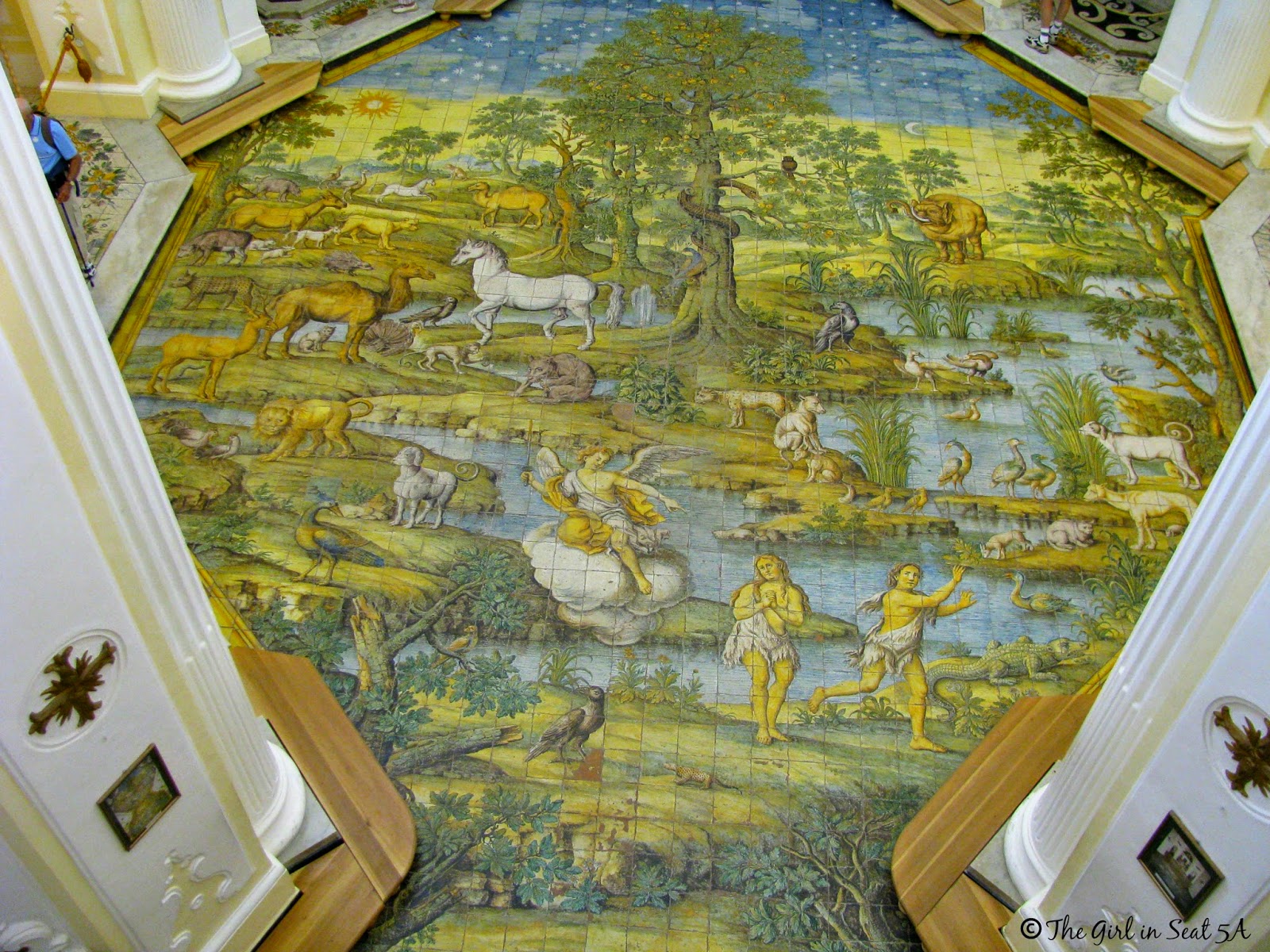 After visiting the church, we did a bit of wandering around and enjoyed the quiet streets and incredible views. 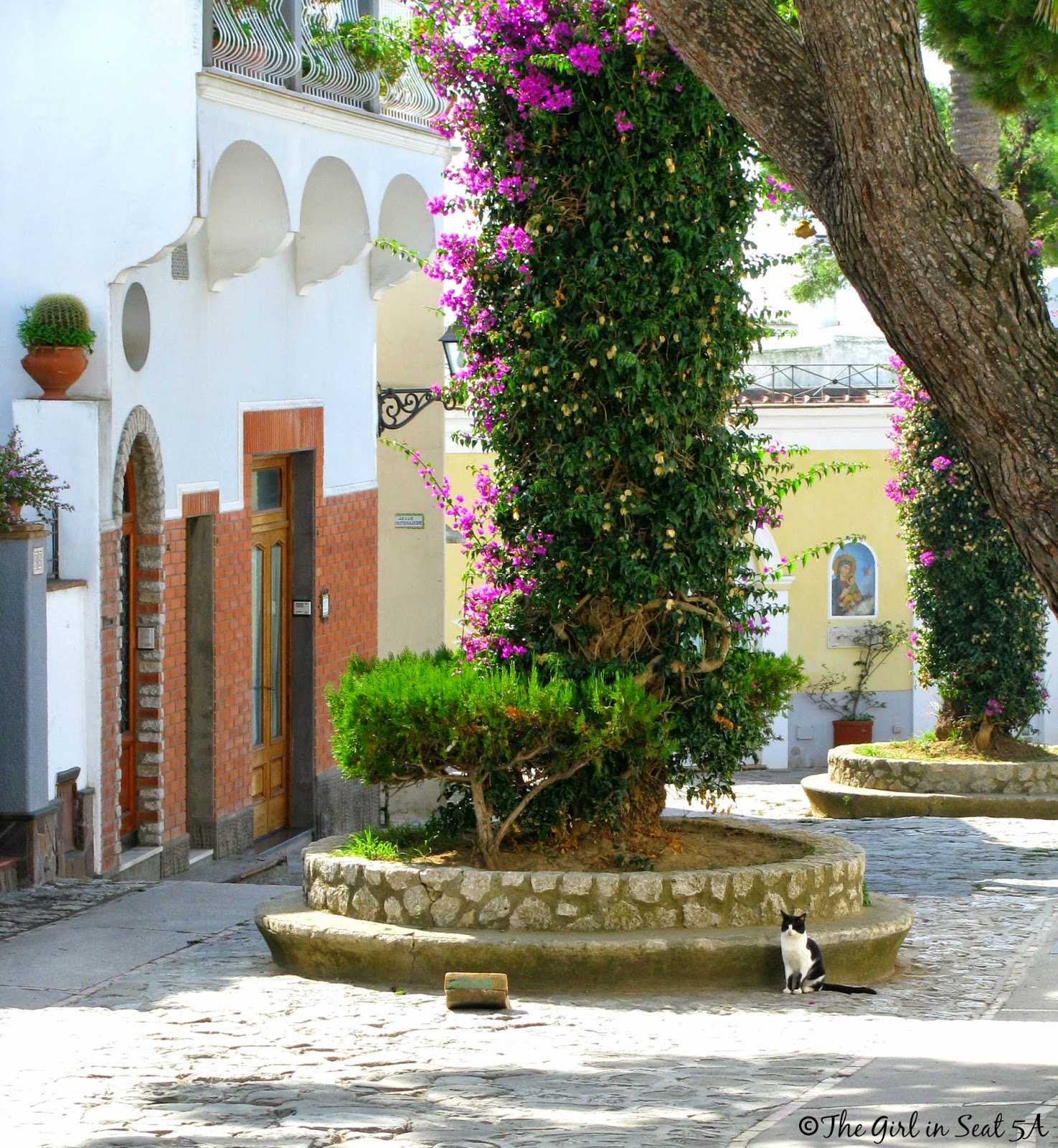 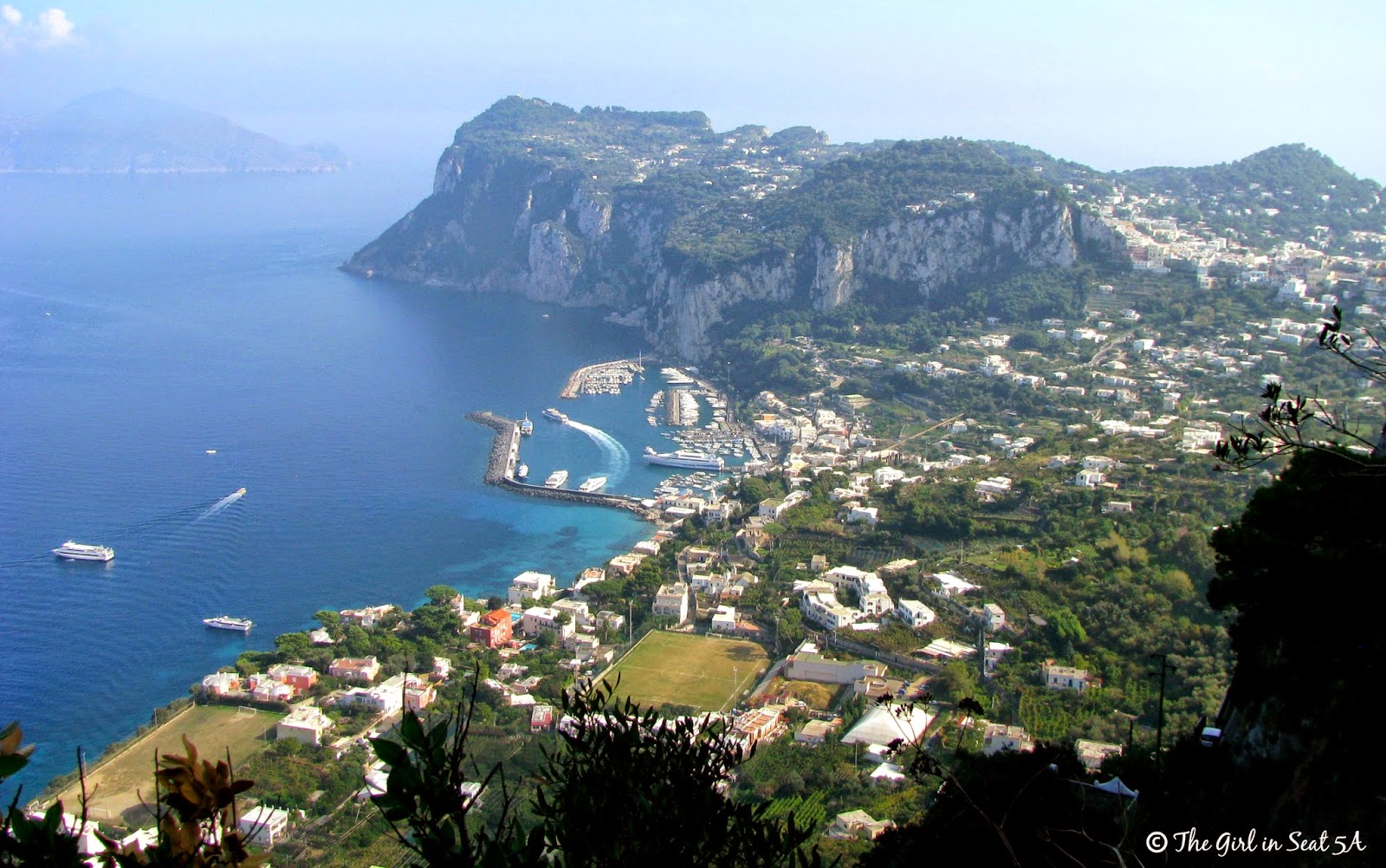 Then it was time for us to get back down to Marina Grande and get on the hydrofoil back to Sorrento.

I have heard many times that to fully enjoy Capri, you should spend at least one night on the island. Once the hordes of daytrippers leave on the last boat, the island supposedly becomes even more magical. By staying, you would also have extra time to visit Villa Jovis and the Gardens Of Augustus, which are both very well reviewed.

Have any of you been to Capri? Hopefully if you have, your experience involved less nausea than mine!

« The Amalfi Coast: It Just Doesn’t Get More Beautiful Than This
Tantalizing Tuscany: An Unforgettable Day Trip From Rome »