I’ve been going to Naples, Florida pretty regularly for about the past 20 years. My parents had friends who owned a vacation home there, so we would go and stay there at least once a year. Since then, Naples has changed drastically from a sort of sleepy, retirees-only area with no nightlife to speak of, to a bustling and busy (but still really enjoyable) city. There are plenty of beautiful beaches, tons of spectacular restaurants and lots of activities for people of all ages. 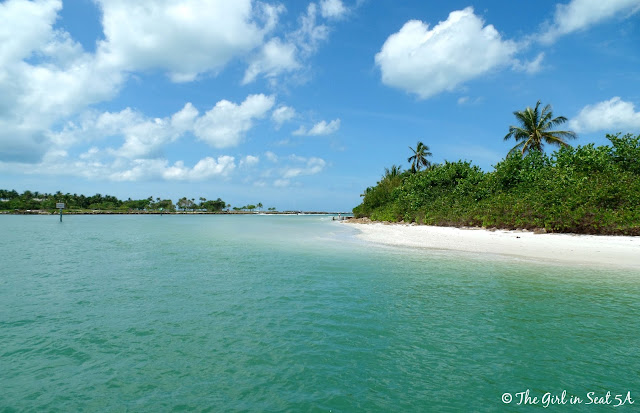 I recently spent a few days in Naples for a quick getaway. Although we were only there for a short time, we packed in a lot of activities and I’m going to share four of my all-time favorites with you.

While it is still a relatively wealthy city, there are also many affordable areas for those that are not zillionaires…they’re just located further inland. That turned out to be a blessing for me, because about 15 years ago, my parents got a vacation home of their own in Naples, which is pretty sweet, but unfortunately it’s not either one of these: 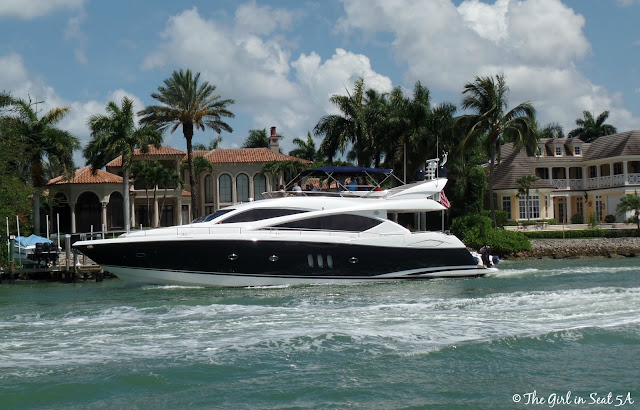 These cozy little shacks are located on the waterfront at Gordon Pass in the Port Royal community, and probably cost the owners somewhere around $20,000,000 (no, I didn’t accidentally put any extra zeroes in there). There’s another house currently for sale in that area for $68,000,000 – so the ones above are positively cheap by comparison. Embarrassing, really.

Anyway, I snapped this pic while we were doing one of my very favorite things and something that I highly recommend you do if you visit Naples:

Go For a Boat Ride

It doesn’t matter how many times (I’ve lost count) I have done basically the same tour/cruise, I always go for a boat ride every time I am in Naples. I love being on the water…feeling the breeze in my hair, the sun on my face and scanning the water for dolphins and manatees…just heavenly.
In the past, we’ve usually gone on a 90 minute sightseeing cruise with a company called Pure Naples on the Double Sunshine, which is a double-decker boat. You board the vessel at Tin City (which I will talk more about later) and are taken on a leisurely, narrated cruise down Gordon Pass toward Naples Bay. This time, however, we opted to do their three hour “eco-tour”, which turned out to be really fantastic and very reasonably priced at $50 per person. The much smaller boat seated 22 people (kind of a tight fit, which is my only complaint), and also departs from Tin City. 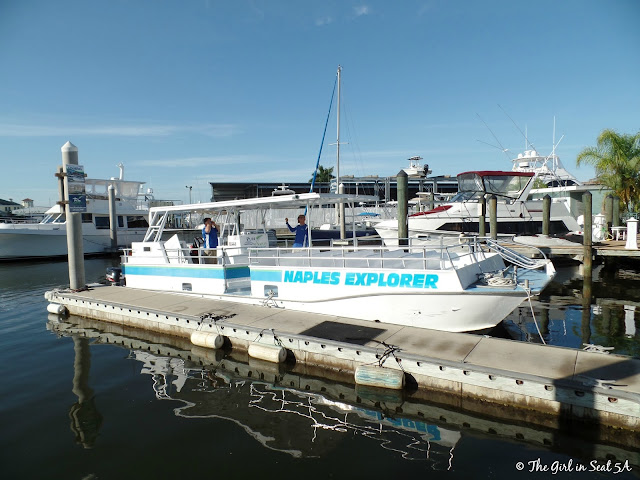 We were in the care of Captain Nick, who was full of interesting facts and had a great sense of humor. The cruise started out the same way as the other one – down Gordon Pass toward the Bay. We passed by the mega-yachts and huge mansions, but also saw lots of nature, including a bald eagle, a juvenile osprey in his nest and a bunch of pelicans and cormorants just hangin’ out: 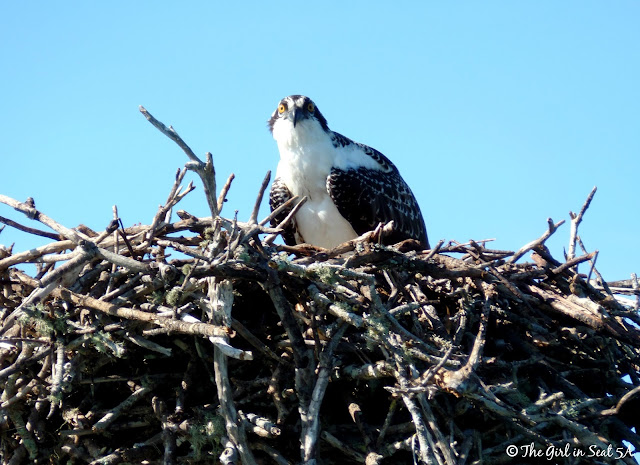 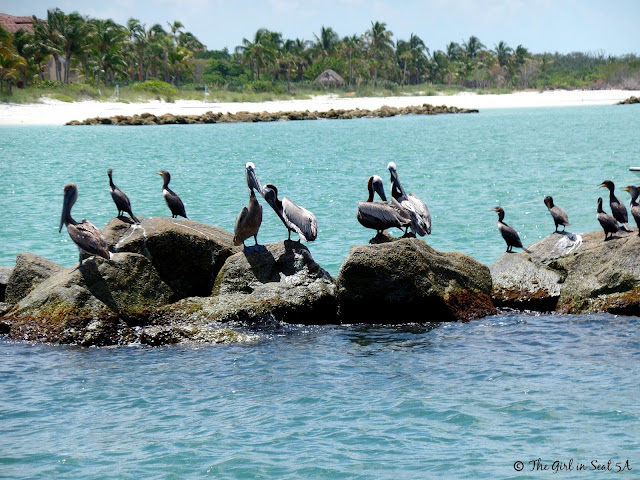 The part of the cruise I was most looking forward to was a stop on Keeywadin Island, which can only be reached by boat. Captain Nick ran our boat right up onto a tiny beach area and we all hopped out (might be tricky, but not impossible, for older folks). We walked about 50 feet down a path surrounded by thick foliage, but when we came out the other side, we found ourselves in paradise. The sprawling white sand beach was nearly empty except for our group and the beautiful blue water of the gulf was just breathtaking. 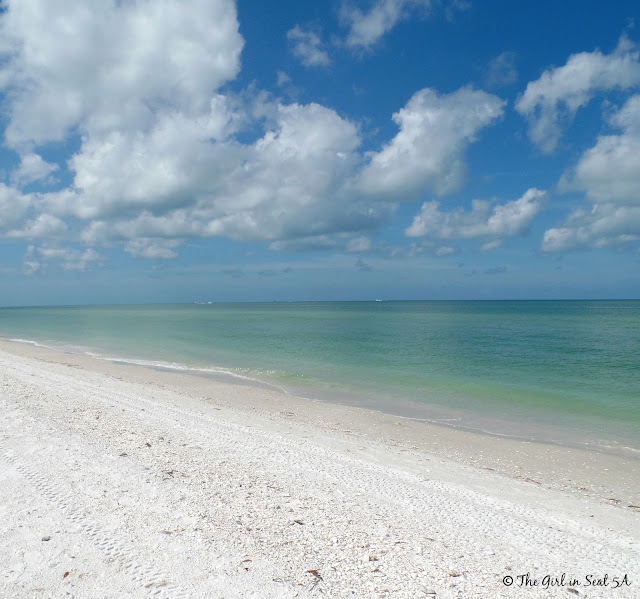 We had an hour to spend walking the beach, shelling or swimming (or all three), then got back on the boat. On the way back, We spotted several dolphins, which made me extremely happy, but they weren’t very playful and this is the best picture I was able to get: 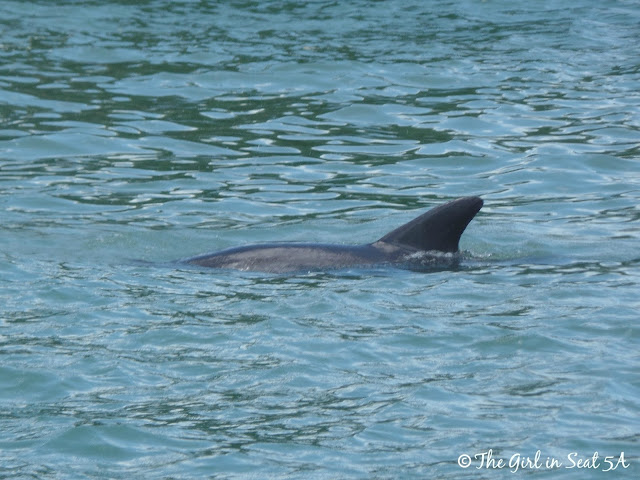 This was a really great cruise and one I would absolutely recommend.

Take a Tour of The Everglades

It’s a 60-90 minute ride to the area in the Everglades where you can find several companies that will take you on airboat tours. I’ve gone on a couple with the most popular companies, and they were enjoyable, but this time we were looking for something a bit different.
I came across a company called Down South Airboat Tours on Trip Advisor, and when I took a look at the reviews and their website, I knew that was the one I was looking for. On their home page, it says “Adventure, Not a Tour” – and that couldn’t have been more accurate. We were simply blown away by the hour we spent on the boat with Captain Gary, who is one of the owners of the company.
Unlike the bigger companies, which have many different boats so they can pack in as many tours as possible, Captain Gary has only one at this time. It can fit up to six passengers, but on our tour, it was just my mom and I (all the tours are private tours). 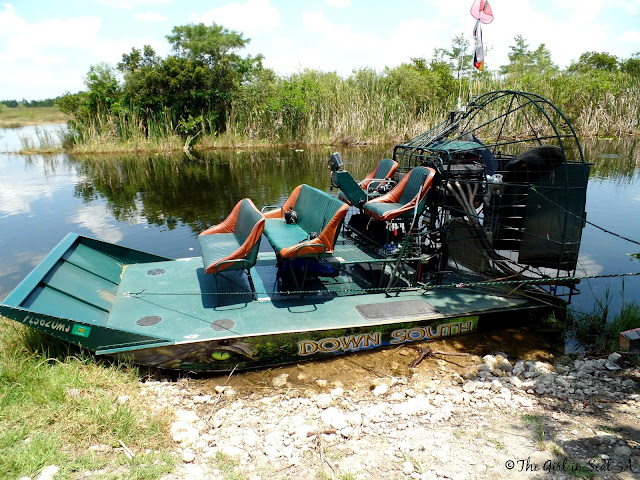 Also unlike the other companies, Captain Gary takes you on the freshwater side of the Everglades…over what is known as “the river of grass”. His boat, which is completely flat-bottomed, only needs one inch of water to glide over (!?!?). For short periods, it can even go right over the grass itself, which is exactly what it looked like we were doing a few times: 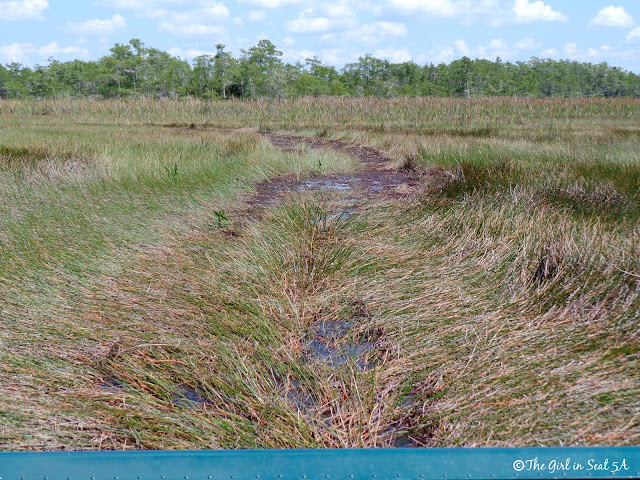 The ride was amazing. There was nothing but nature for as far as the eye could see in all directions. We didn’t come across any other tour boats like you find happens with other companies, because there were simply no other humans around.
Captain Gary’s family goes back six generations in the Everglades – his knowledge and the stories he shared were engaging and informative (he provides two-way headsets so everyone can easily communicate with each other). The love he has for the Everglades and for the wildlife that lives there is apparent and infectious. On the ride, we saw about 15 alligators. I swear I have no idea how Captain Gary spotted them sometimes, but he always did and would spin us around, then navigate in for a closer look. 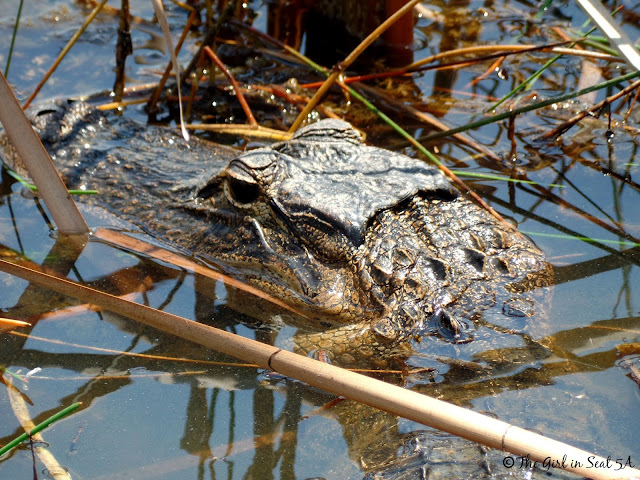 We were also lucky enough to see two alligators together. They are generally very solitary creatures, but since it was the tail end (pun intended) of mating season, we spotted two duos. In the picture below, the bigger one that’s farther from the camera is the male, and we actually saw him snatch and eat a fish, which was very cool (though I’m guessing the fish would disagree). 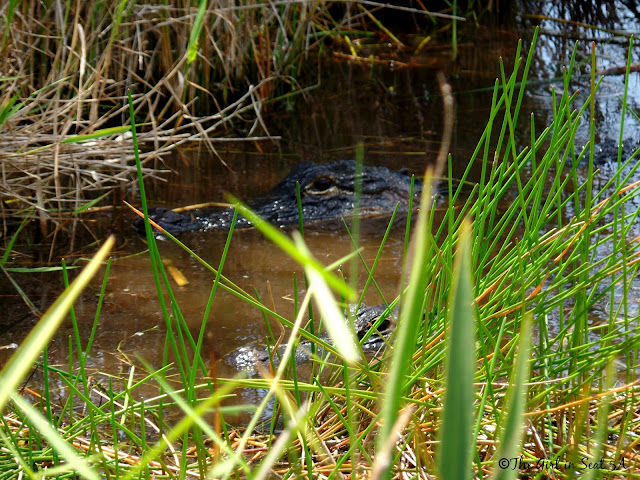 We also saw a bunch of different birds: great blue herons, green herons, cormorants, egrets, wood storks, hawks and more. I wish I was able to get a picture of all of them, but they tended to fly away quickly when the boat approached and I just wasn’t fast enough. The only one that stuck around for a photo op was this cormorant: 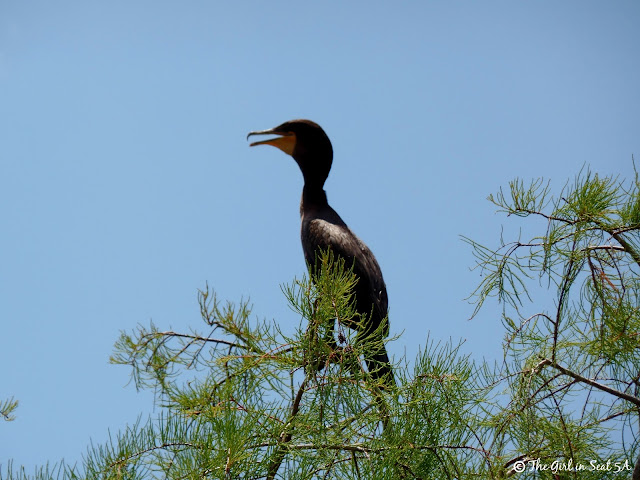 I truly can’t say enough good things about this tour. It may seem a little pricey ($100 per person for an hour), but what you get is well worth every single penny. I fully intend to take another tour with Captain Gary the next time I am in Naples, and I will actually take an even longer one. I’m telling you, it was amazing. Please do yourself a favor and do not waste your time or money on any other Everglades tour.

Watch the Sunset on the Beach

There are many beautiful beaches in Naples. As long as it’s not raining, when it’s time for the sunset, you will find tons of visitors and residents alike gathered on all of them to watch the sun go down. We went to Vanderbilt Beach, and there is a parking garage where you can park for free about a three minute walk from the beach. Bring a towel or a chair, and settle in to appreciate some stunning beauty: 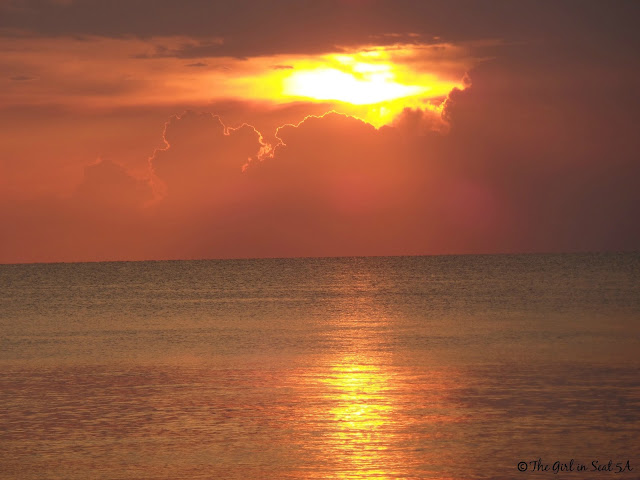 As everyone waits with cameras in hand as the sun descends, you will often hear people talk about “the green flash”. Some say it’s just a myth, but many others say it’s real and they have seen it. Those who believe it’s real – though exceedingly rare – say that on very clear days, just after the sun dips below the horizon, you can see a quick green flash of light. My mom claims to have seen it once, and we all pretend to believe her even though we don’t (but if she reads this, I guess the jig is up). With or without the elusive green flash, the sunsets in Florida are always worth watching!

I will be honest and tell you that Tin City doesn’t really float my boat anymore, but if you’ve never gone there before, it’s worthy of a quick stop. It looks kind of like a few ramshackle buildings put together and inside are a bunch of fun, touristy shops and a couple of restaurants. 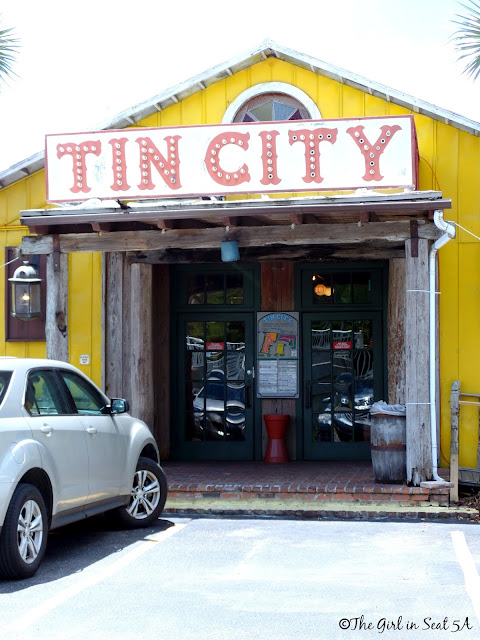 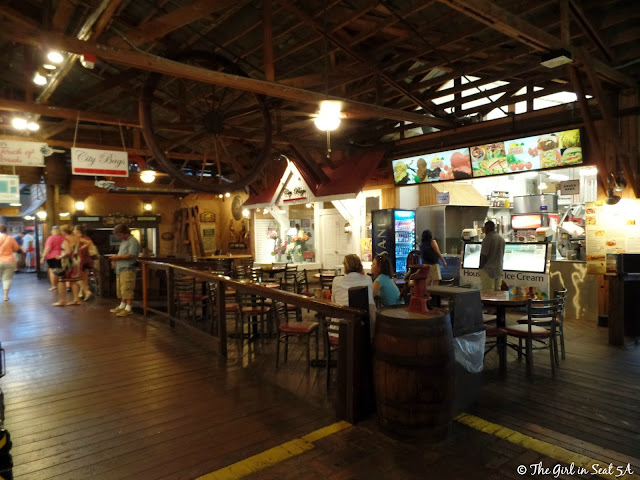 When we first started going to Naples, this was one of my favorite places to go, but in the years since, a lot of the shops have closed and it just doesn’t hold the charm for me that it once did. But if you are going to take one of the boat rides that departs from Tin City, it’s worth spending a quick half-hour or hour wandering through and getting a souvenir like this shirt (it still makes me laugh and I’m kicking myself for not getting it): 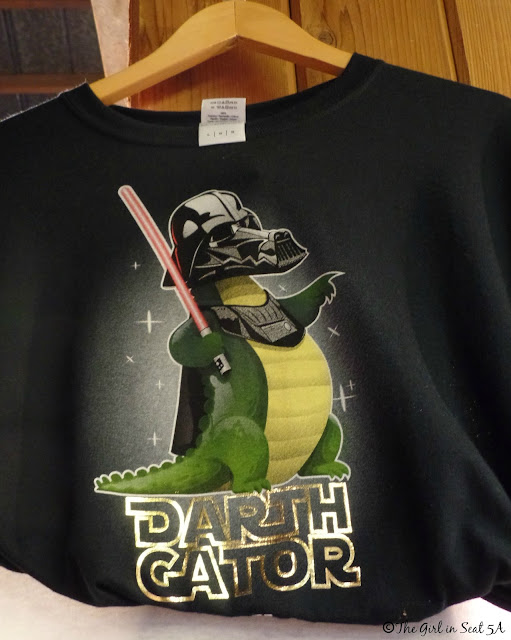 There are so many other fun things to do in Naples that we just didn’t have time for during this trip: going to Naples Pier, doing some window-shopping on pricey 5th Avenue South or going to Corkscrew Swamp Sanctuary. If you’re a golfer, you can play a few rounds at Greg Norman’s Tiburon course or one of many others. For easy day trips, head to beautiful Sanibel Island or up to the Tampa-St. Pete area. If you have more than a week to spend there, you can also do an overnight trip to the Keys.
Don’t expect the kind of nightlife in Naples that you’ll find in Miami. Naples is much more laid back, but you can still have a lot of fun. All in all, Naples is a great place to visit in Florida…and I can’t wait to get back there again!
In my next post, I’ll talk about some of my favorite places to dine in Naples!