Before I started planning my trip to Spain, I had heard of Sagrada Familia, but that’s just about it. I don’t think I had ever heard of Park Güell, Casa Milà or Casa Batlló. I certainly had no idea what a genius Antoni Gaudí was and how totally enchanted and blown away I would be by his works.
Having only three days in Barcelona, we knew we would need to do an organized tour in order to see all of the Gaudí masterpieces we wanted to see. Based on a recommendation from a friend, we ended up booking a 6-hour private tour with Pepito Tours. This was, by far, the highlight of our time spent in Barcelona and I very highly recommend this company. Our guide, Sergei, picked us up right on time and away we went.
First stop: Park Güell, where this colorful dragon greets you as you enter: 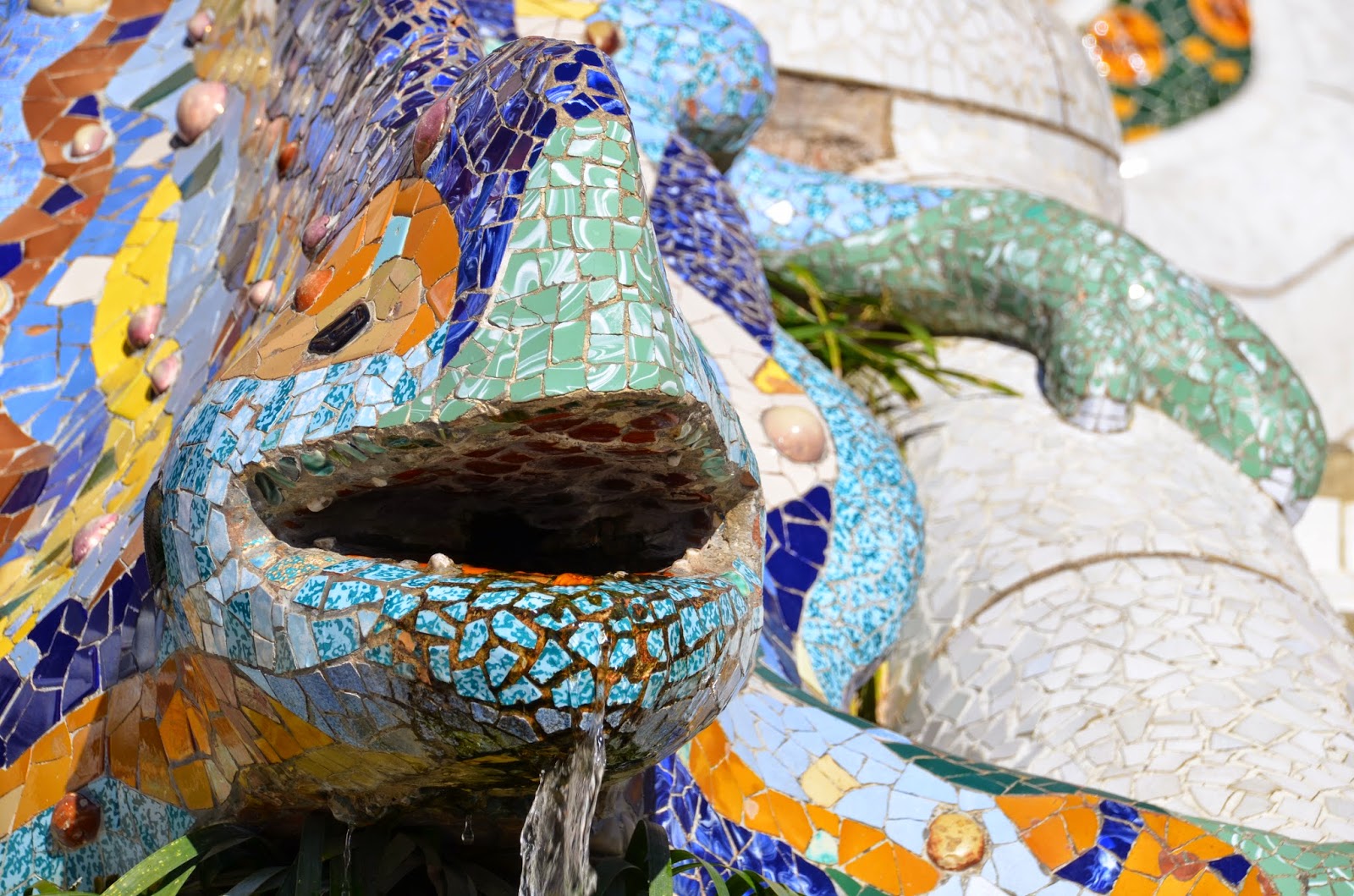 I would definitely recommend visiting Park Güell in the morning, before it gets overrun with people. When we first arrived, there were not many other people there, but by the time we left, it was getting pretty crowded.
This UNESCO World Heritage Site is a fun and fascinating place to wander around. From the curving mosaic benches to the buildings that look like they came straight out of fairy tales, the Park is a wonderful place to spend time (give it at least three or four hours) and marvel at the wonder of Gaudí. 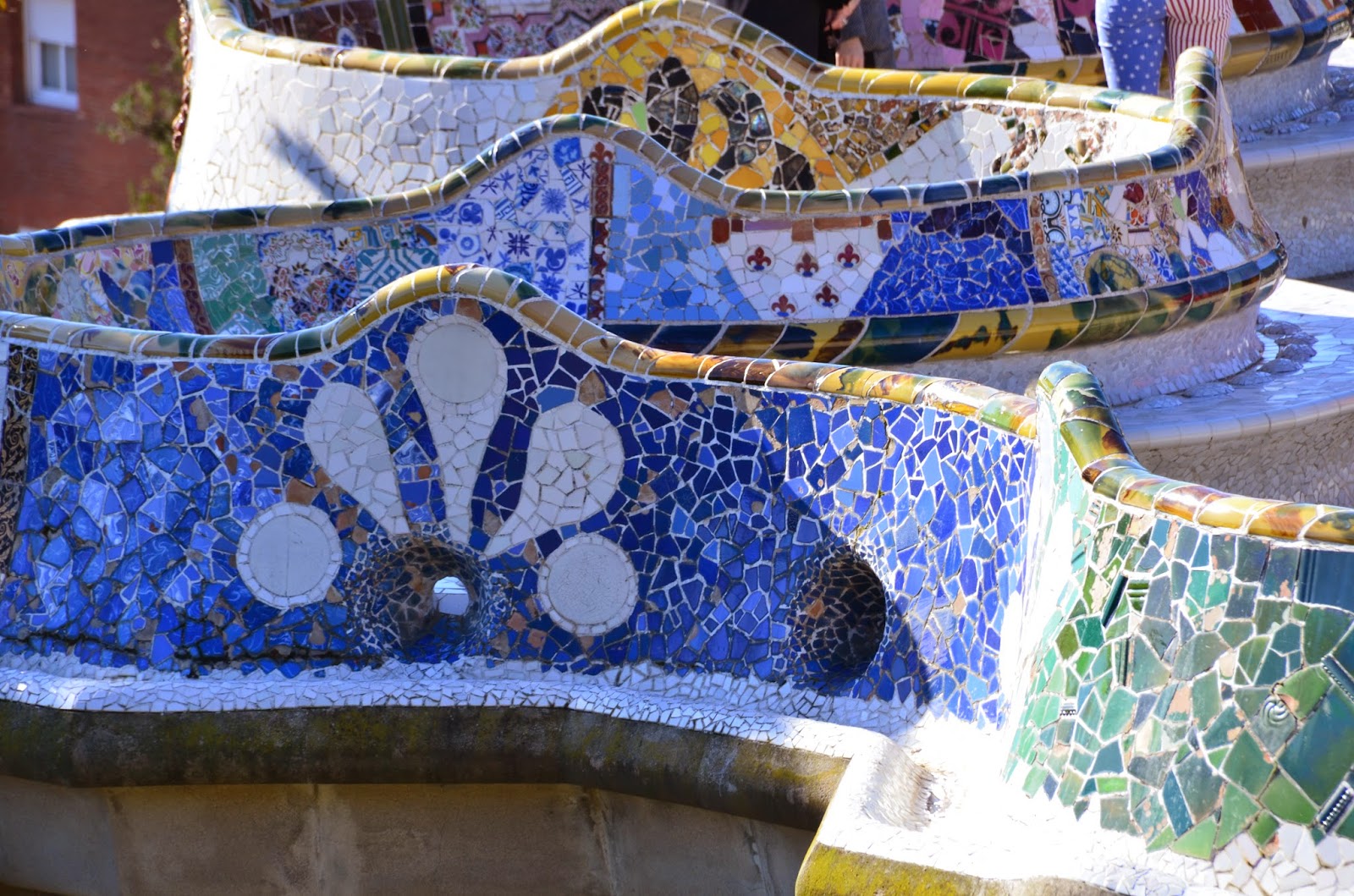 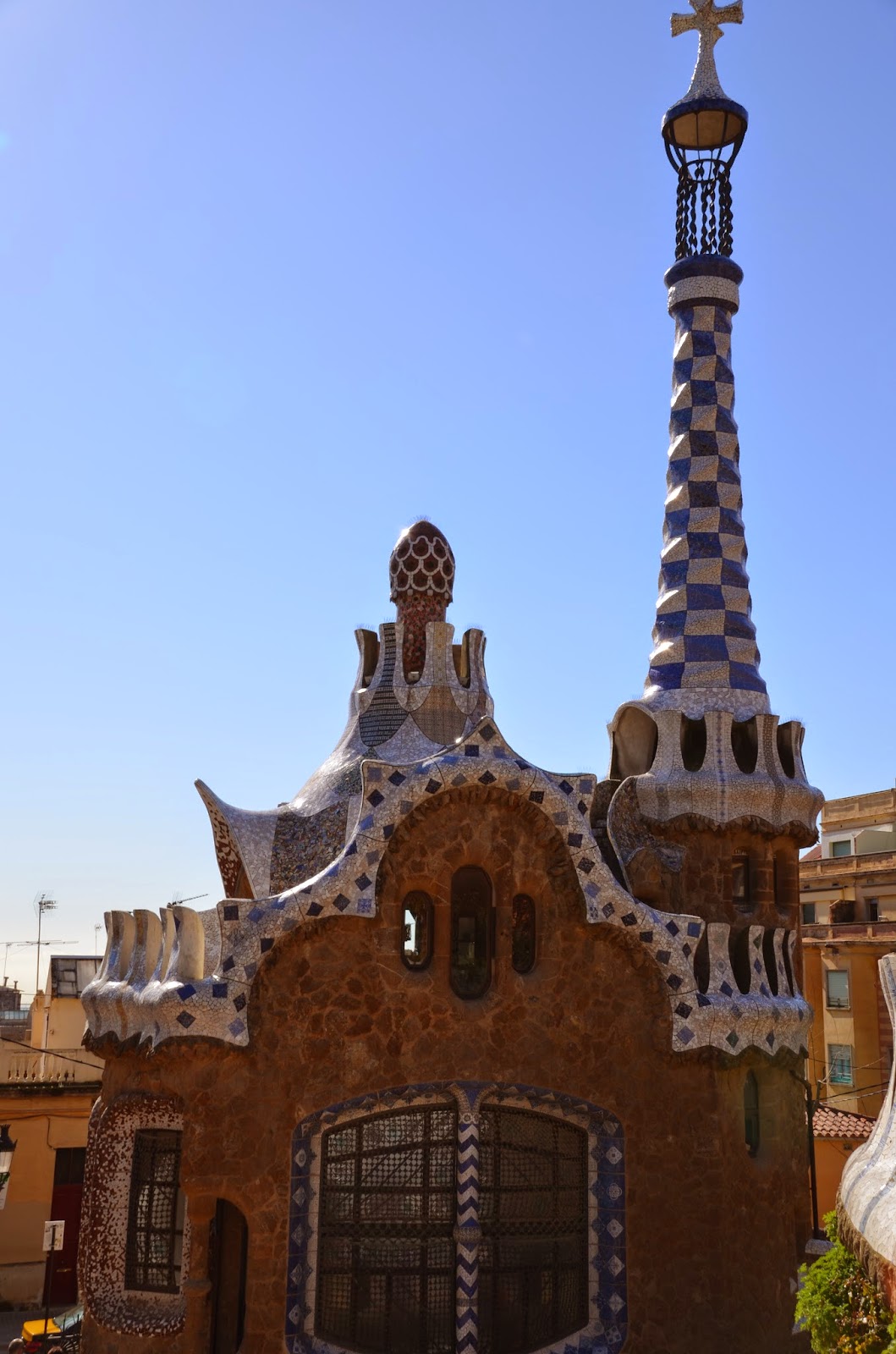 Gaudí was very strongly influenced by nature and natural shapes, and this is very obvious as you look at his works. Vibrant colors, rounded edges, flowing lines, natural textures…everything seems organic and almost…alive. I know that’s kind of a weird word to use, but I can’t think of a better way to say it! After Park Güell, we were off the the Eixample district of Barcelona to visit Casa Milà (also known as La Pedrera: “the stone quarry”). This modernist building of Gaudí‘s was built between 1906 – 1912, and is also a UNESCO World Heritage Site. While I thoroughly enjoyed the fanciful feeling of Park Güell, Casa Milà is where I really started to realize what a genius Gaudí actually was. 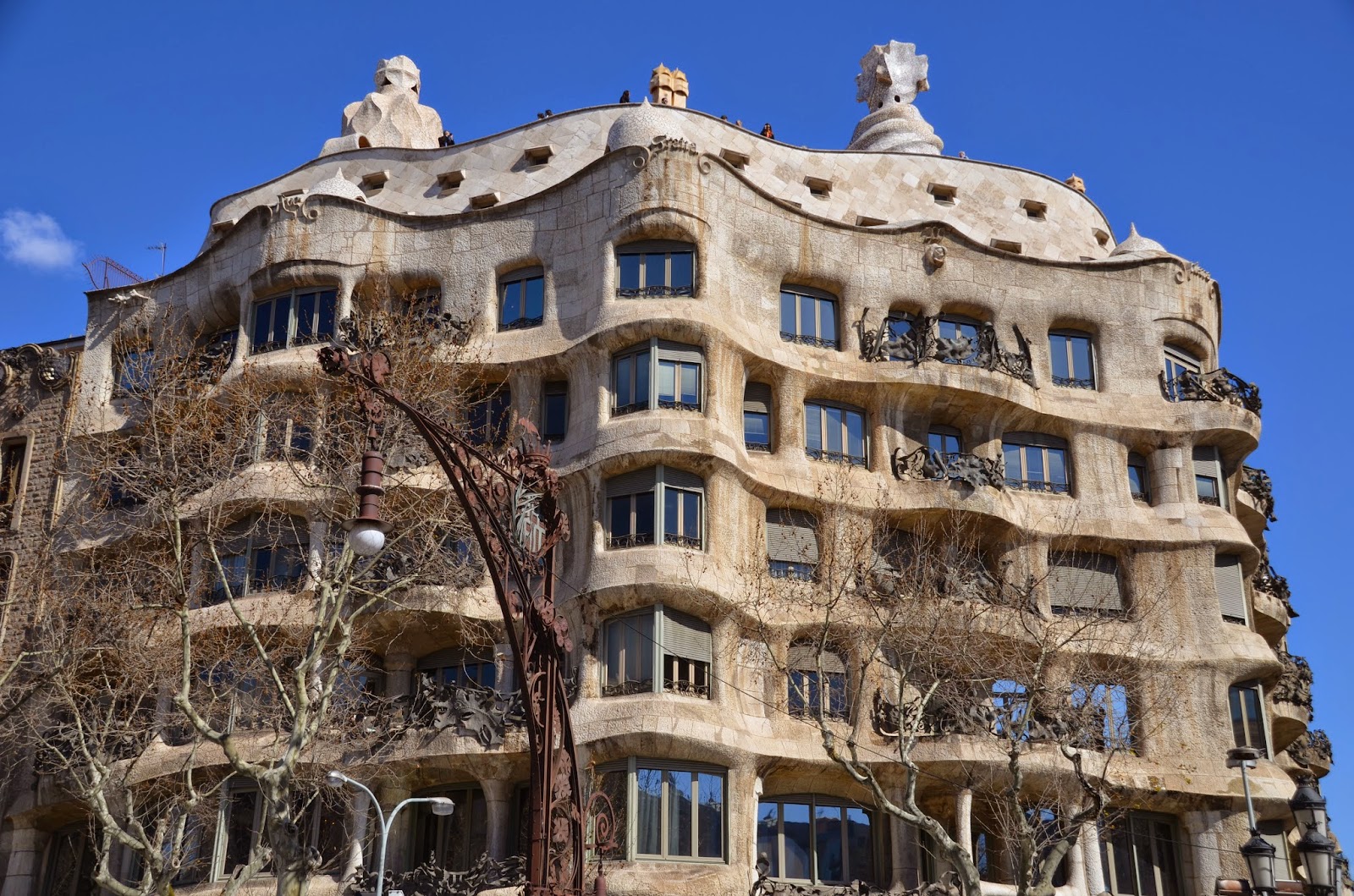 I mean, aside from the fact that the building is just plain cool to look at (both outside and inside), when you tour the inside and visit the apartments that he designed with door handles that better fit the human hand, chairs that better fit the human butt, view and read about the processes and methods he used to figure these things out – you will be simply amazed. And then, of course, there’s the roof…filled with ventilation towers and chimneys that I can’t think of as anything other than Imperial Storm Troopers (though I’ve heard them referred to as other things, which I will simply leave up to your imagination): 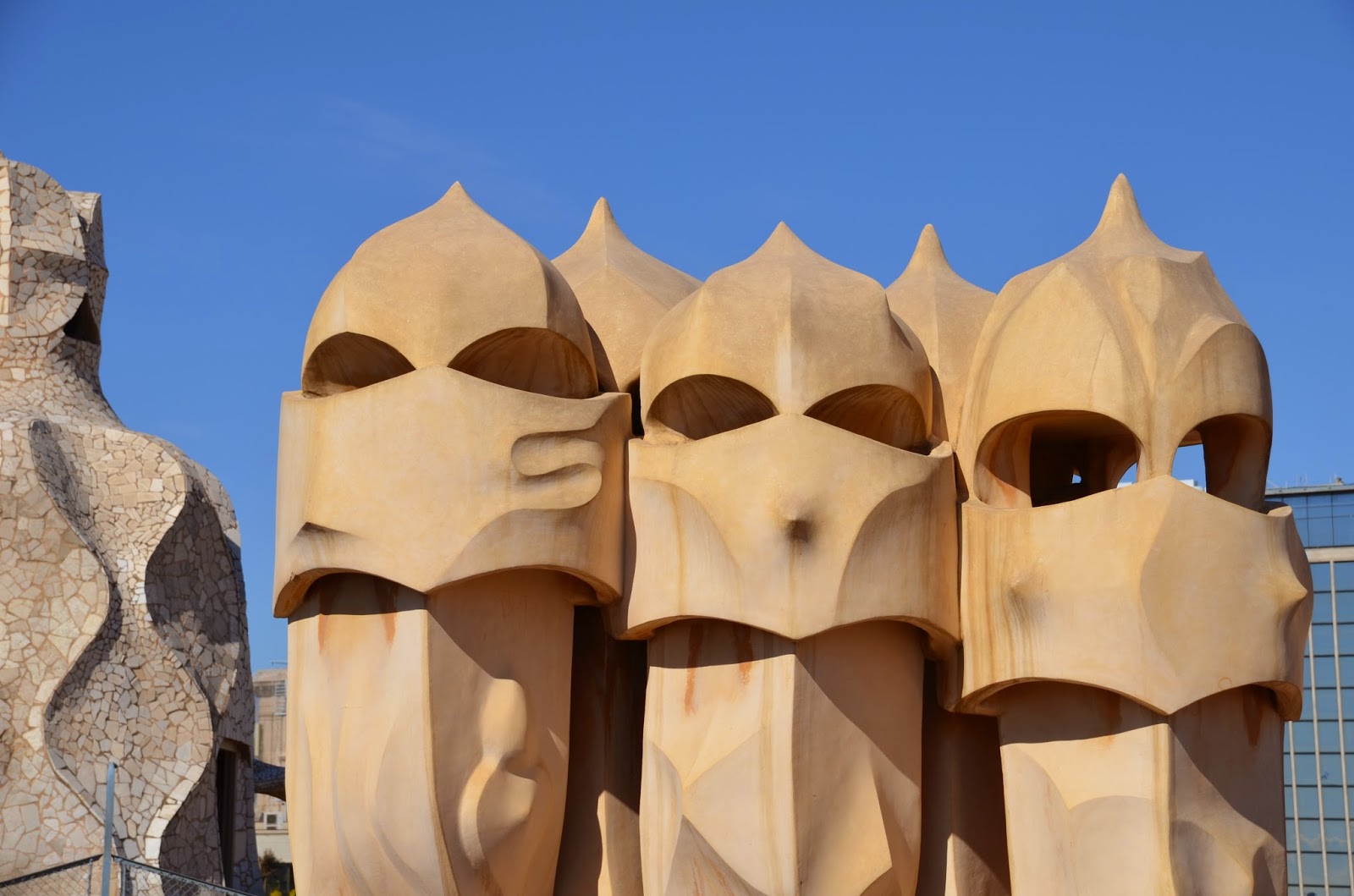 We learned so much more visiting this site (and the others) with a guide, and I highly recommend you do the same. If you can’t, or don’t want to, do a private tour, you can use the audio guide that is included in the admission price (currently 20,50 Euros for adults). Guided group tours are also available to schedule in advance – visit the website for more info.
Casa Batlló is very near Casa Milà and is another one of Gaudí’s masterpieces, which was an existing house that he redesigned in 1904. We chose not to go inside because we wanted to make sure we had plenty of time at La Sagrada Familia, but even just viewing this magical building from the outside was a fun experience! 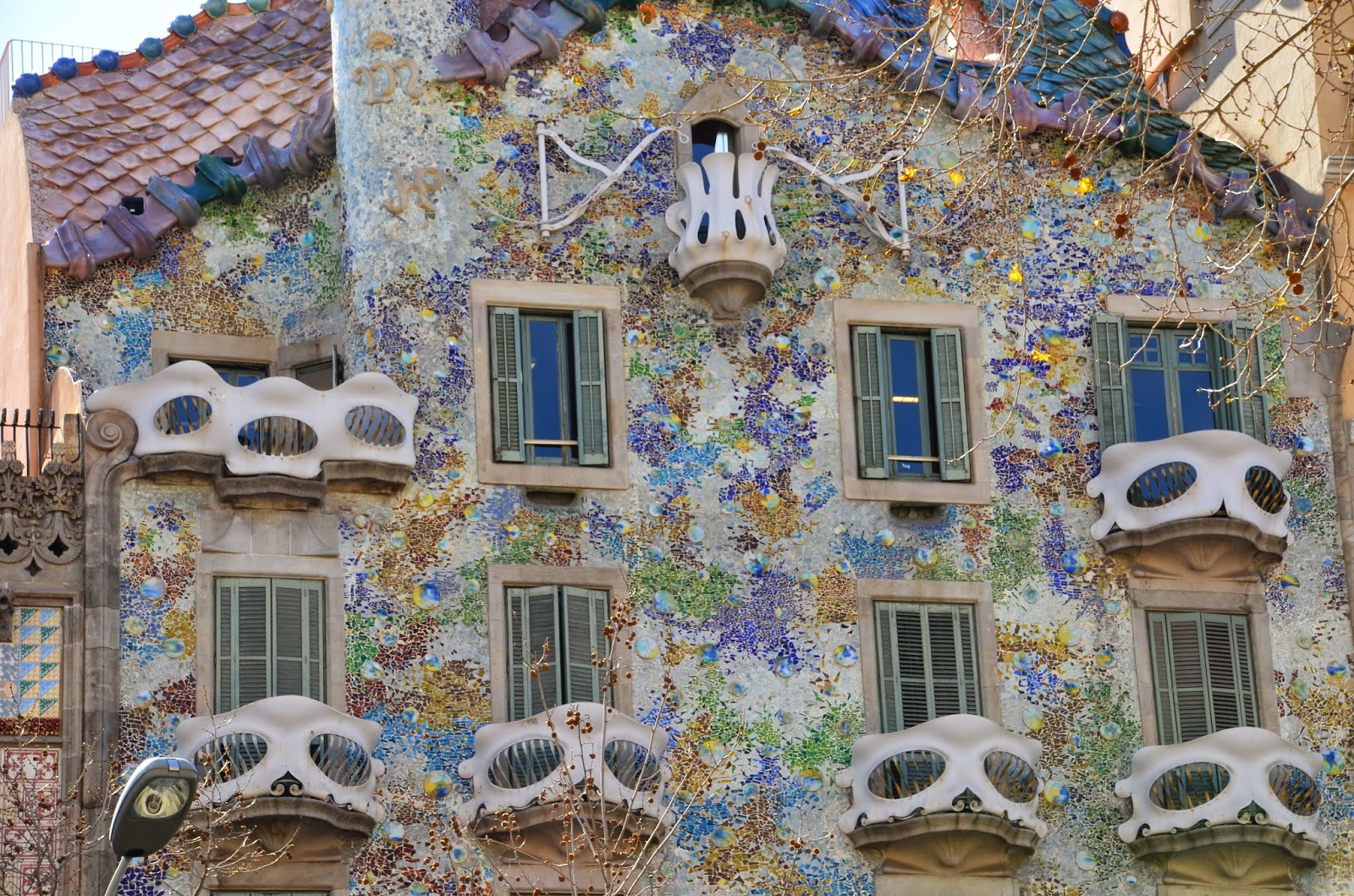 The final stop of the day was La Sagrada Familia. To me, this place (along with St. Peter’s Basilica in Rome), can never be adequately described in either words or pictures. One must see certain things with their own eyes to even begin to understand their magnificence. To call Sagrada Familia “jaw dropping” or “amazing” or any other adjective, simply wouldn’t do it justice. Construction began on the Basilica in 1882, and Gaudí joined the effort soon after, in 1883. He worked on it until his death in 1926, and to this day, the building remains under construction. 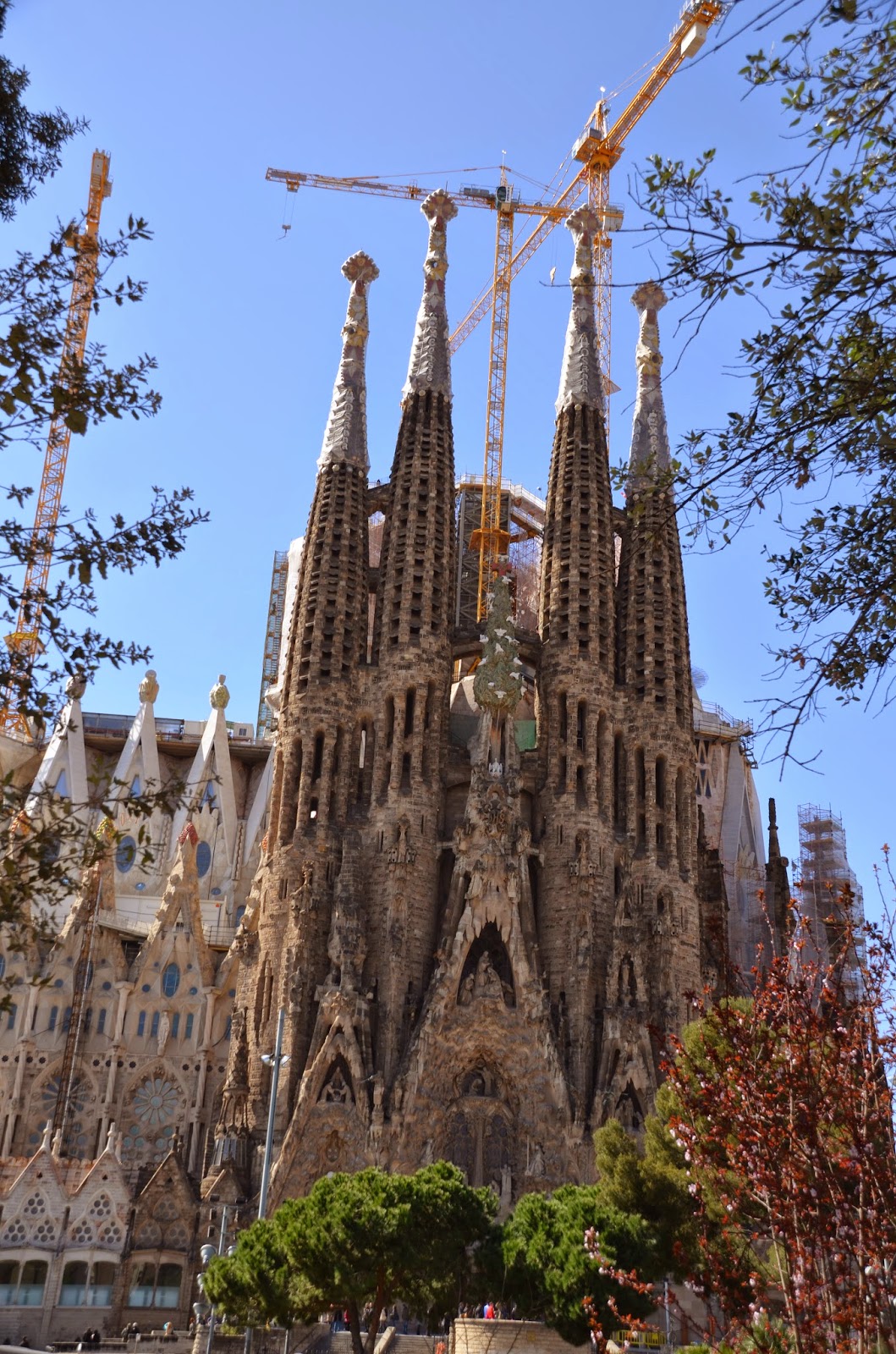 When you first see the building from a distance, you cannot even begin to imagine the intricate details that appear so rough from far away. For example, the center, almost cave-like area you can see above actually looks like this (note the stained glass windows…I’ll show you these from the inside as well): And here’s another “small” section of the facade: 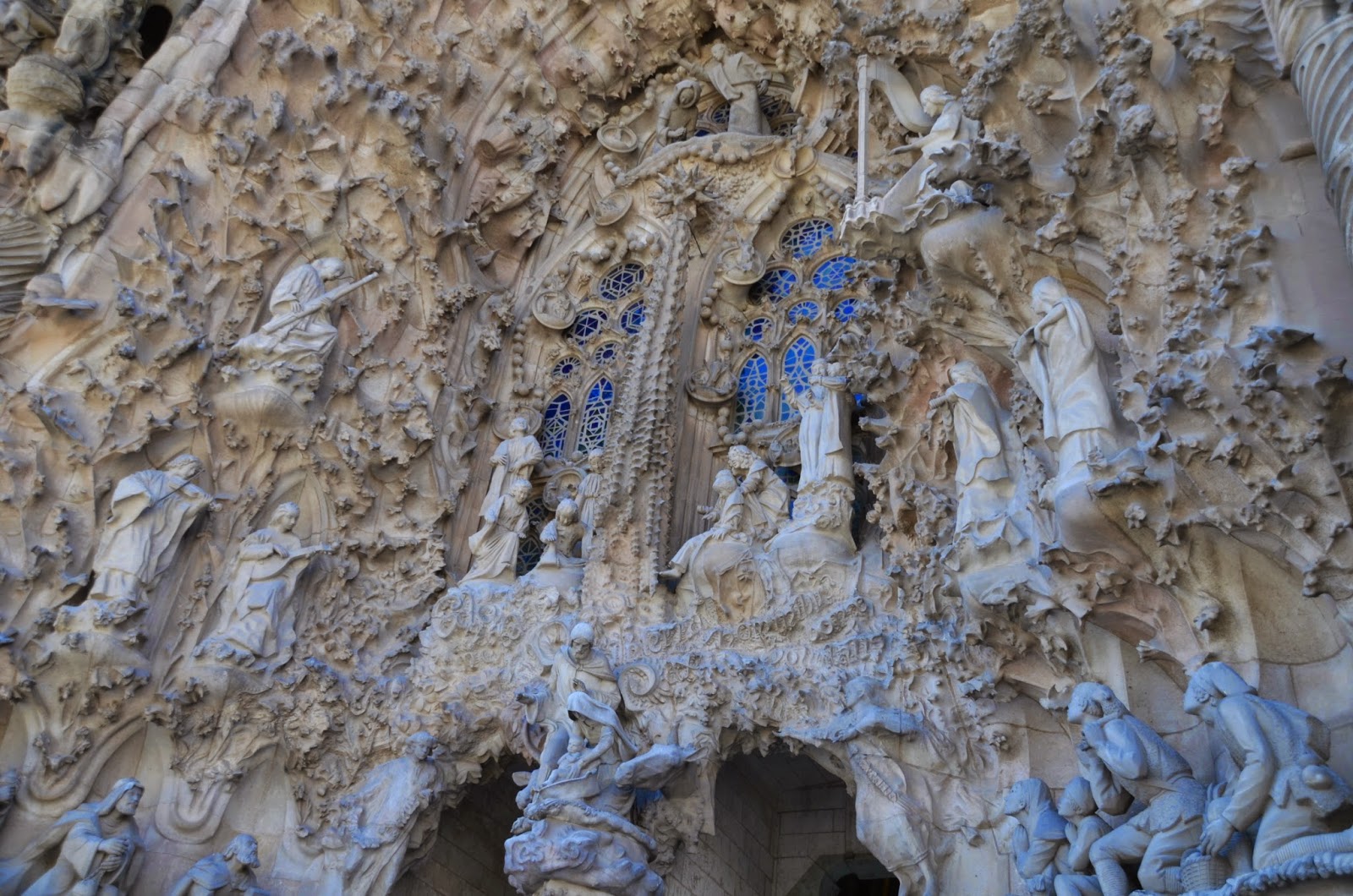 Not exactly what you expected, right? As I mentioned a little while ago, seeing all of these works of Gaudí with a private guide made the experience so much more enriching than seeing them on our own, and this was never more apparent than when we were at Sagrada Familia.
After giving us a very good overview of the Basilica’s history and pointing out different things to note on the outside, it was time to go in. But Sergei stopped us and said he wanted to talk to us before we entered. I don’t remember his exact words, but his message to us was basically to completely open our minds and hearts to the beauty that we were moments away from witnessing. He said that it didn’t matter what religion a person is or what they believe in, but that we should be willing to accept the sheer awesomeness we would experience inside. It might sound hokey, and normally I would interject some sort of light-hearted or funny comment here, but I’m not going to because – let me tell you – when I walked inside and looked around me, I cried. I didn’t fall to my knees and weep, but I got choked up and had a some tears fall from my eyes. I figured it was partially due to Sergei’s speech and partially due to the fact that I’m naturally a cry-baby, but then I looked around and saw my mom, my aunt and even a few strangers dabbing at their eyes or just staring around them, mouths agape.
The inside was a soaring space filled with columns that look like palm trees, vibrantly colored stained glass windows and the most original crucifix I have ever seen. I don’t want to be struck by lightning, but it really kinda looks like Jesus is parachuting in on his cross, doesn’t it? 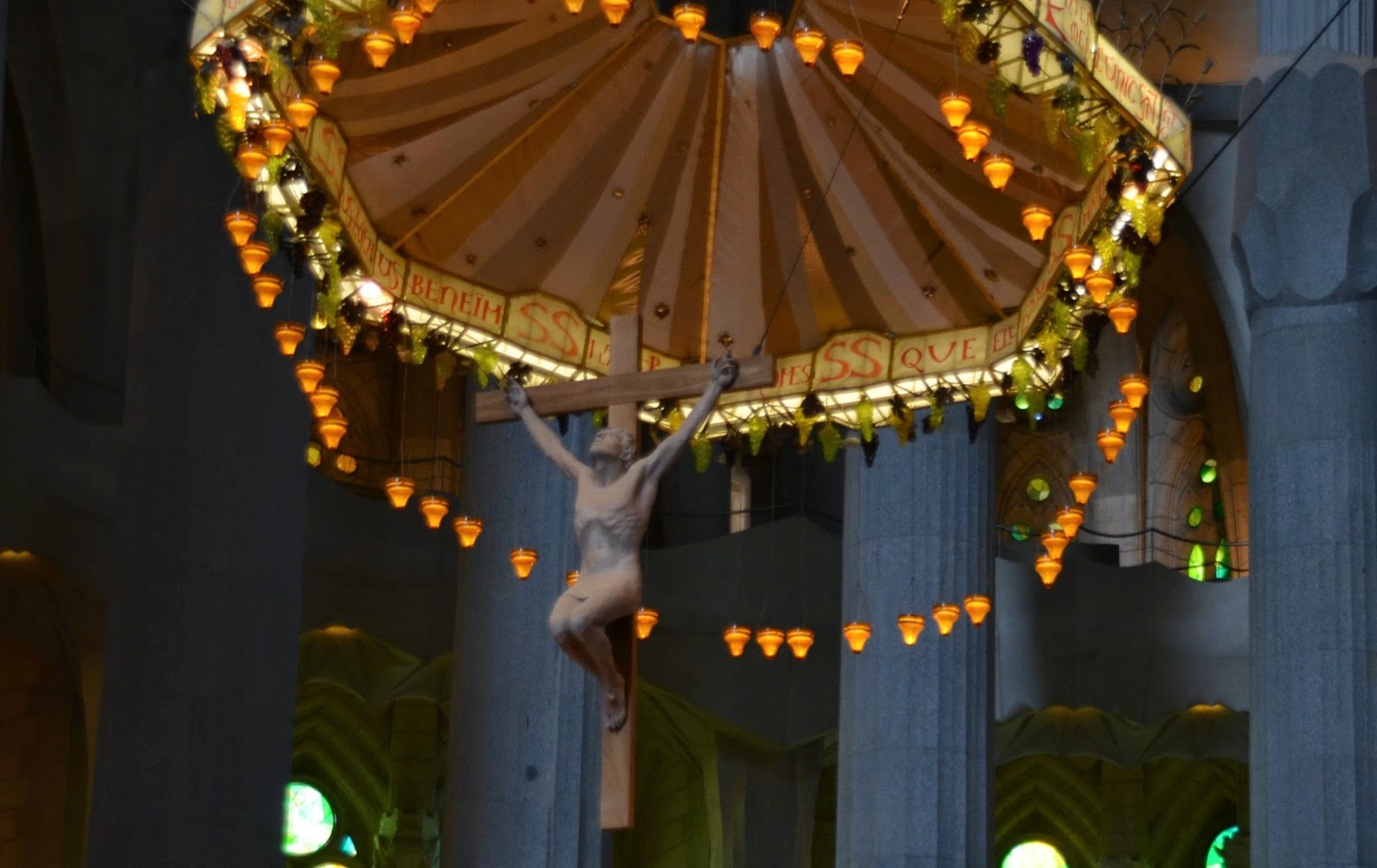 The stained glass windows (especially with the sun shining through them) were simply awesome: 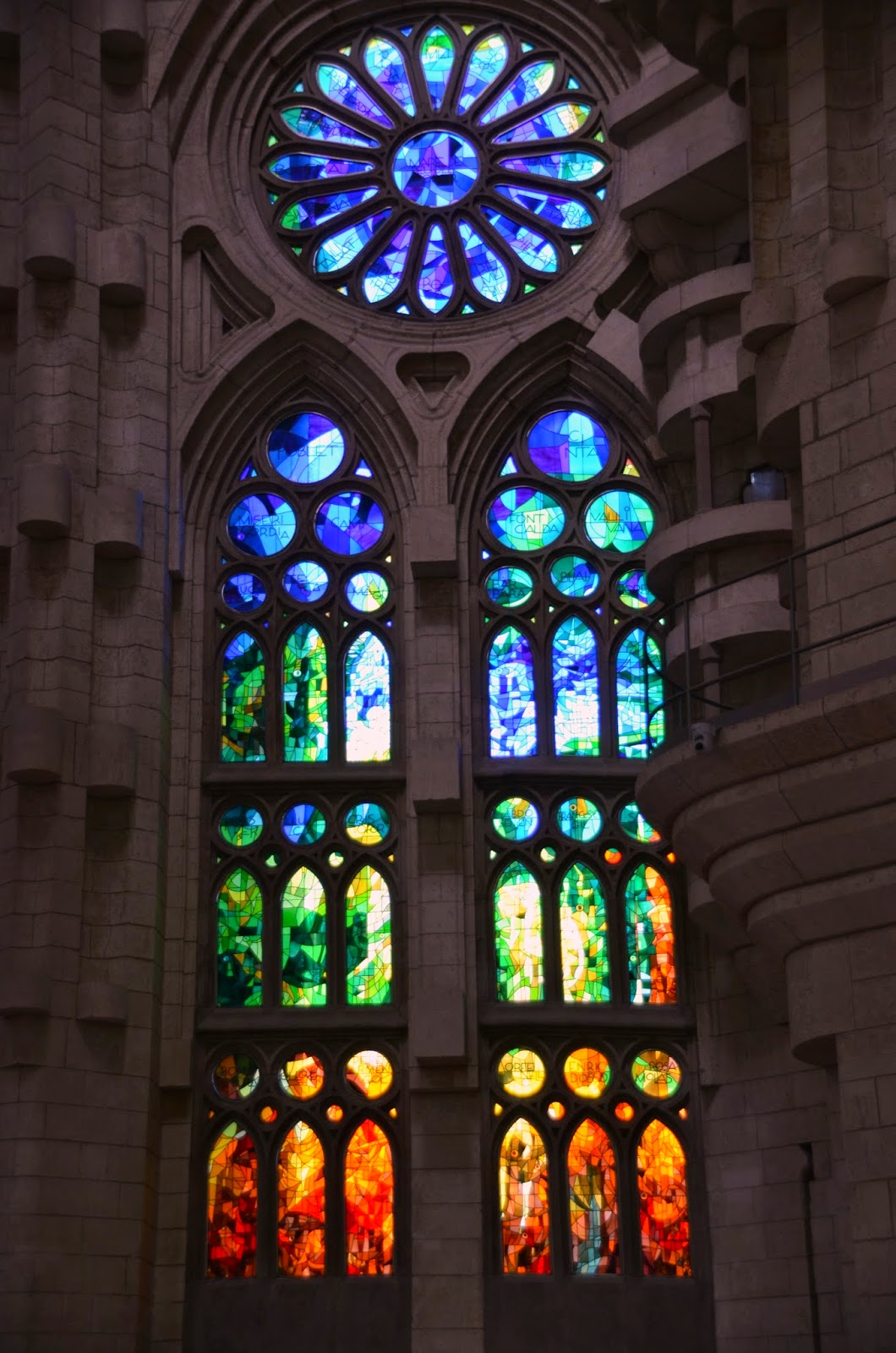 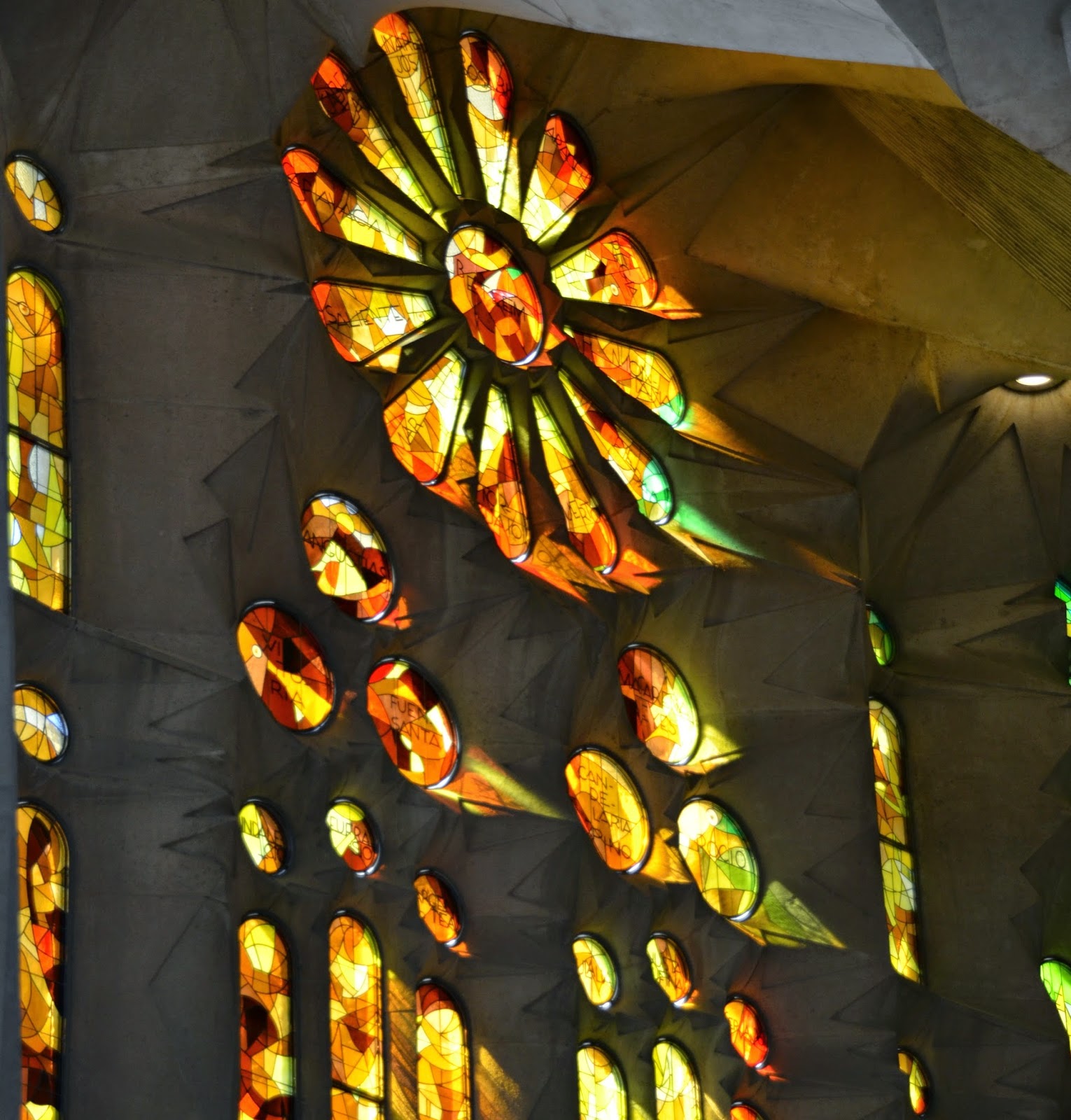 We spent a good amount of time inside the Basilica, then went through the museum as well (interesting and worthwhile). But, really, this is just something you have to see for yourself!
Again, it wouldn’t have been possible for us to see all these things (and get as much out of them as we did) in one day without a taking a private tour. If this is something you would like to do as well, I very highly recommend Pepito Tours (they offer many other types of tours as well). They were wonderful to work with from the first contact until we said our farewells. Click here for more info on the company and what they offer.
Have you ever been to Sagrada Familia? Did you get weepy, too, or am I just an emotional mess? Please share (and let’s have a group hug) in the comments below.
In my next post coming Sunday, I’ll share a few of my favorite dining experiences in Barcelona.