Looking for something different and fun to do the next time you are in Rome? Take a cooking class! We did, and it was one of my top two favorite things we did all week. This was our fifth trip to Rome, and all the major things we had wanted to see or do had been checked off our lists on prior visits. So when we were planning our itinerary this time around, I looked for new and “off the beaten path” types of things for us to do – and came across a small group cooking class on the Viator* website (www.viator.com). It sounded great, so we signed up!
Our designated meeting place was in front of a little restaurant not too far from our apartment, and I assumed that that’s where our class would be held, but I was wrong (it happens every now and then). We were greeted by a man and woman, who introduced themselves as Leo and Nicolette. In a fantastic turn of events, they told us that it would just be the three of us in the class…so our “small group” cooking lesson turned into a private one! Yay! Leo then told us our first stop would be Campo de’ Fiori, where we would select and purchase the fresh vegetables that we would be cooking with.
The Campo is one of my favorite places in Rome. I love just wandering around, looking at the colorful, beautiful produce that the lucky locals get to choose from every single day (except Sundays, when the Campo is closed). If I lived near here, I would eat so much healthier. I mean…just look at this: 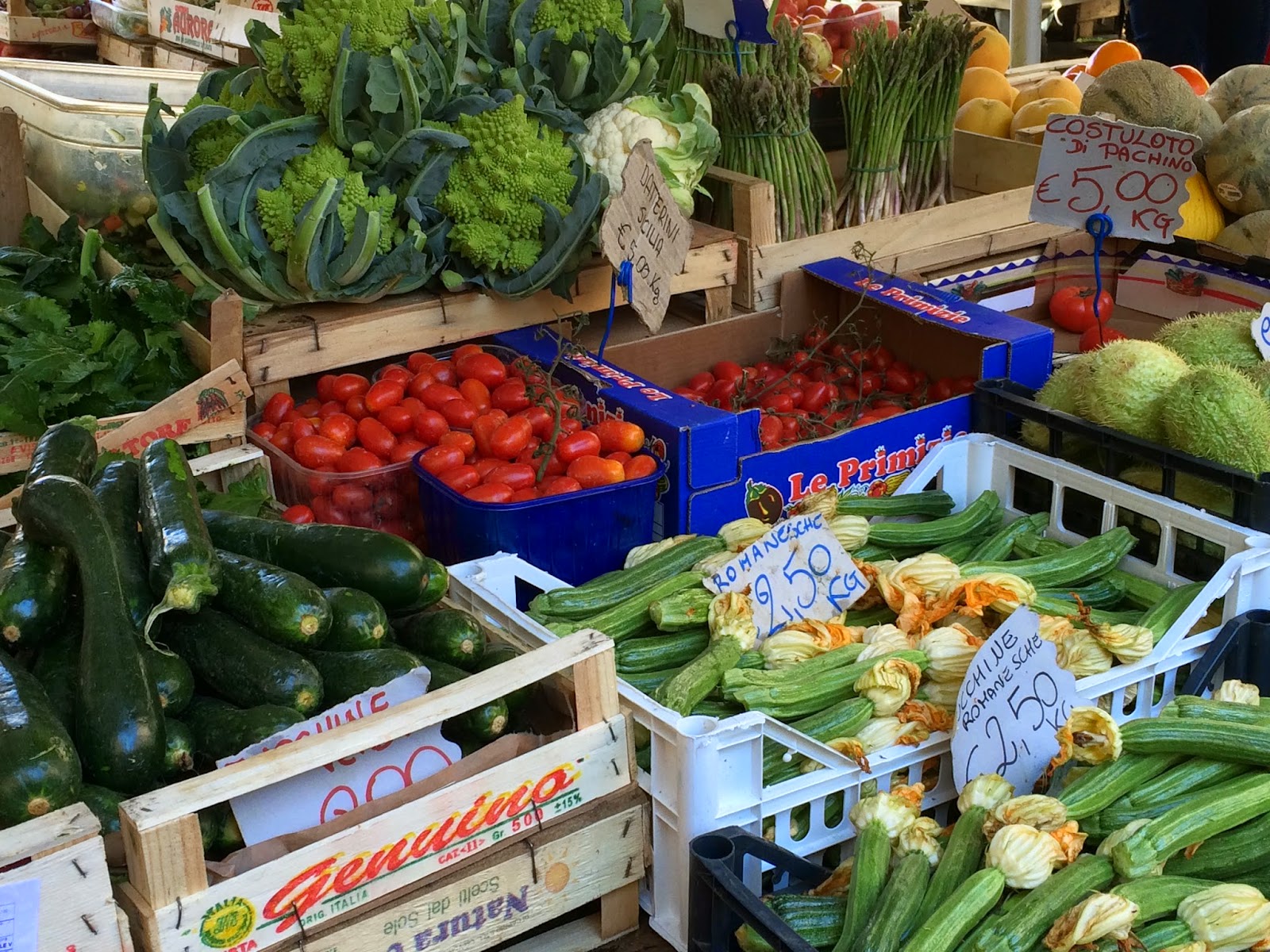 It’s really such a great place to visit. In addition to fruits and vegetables, there are also stands where people sell cheeses, truffle and olive oil, dried fruit, flowers…even t-shirts, scarves and other souvenirs. The Campo itself is surrounded by restaurants, cafes and side streets where you’ll find a plethora of stores. It should be a “must” on your list of places to go in Rome!
After we got our produce, we stopped at a nearby store to get fresh cheese, then a butcher store to get some veal (apologies to any vegetarians reading this). All the while, Leo (who is the head chef at a restaurant near the Trevi Fountain…more on that later) was explaining how to select the best produce, what cuts of meat work best for certain things, etc., and made the normally mundane process of grocery shopping into an educational experience.
Once all of our ingredients were procured, Chef Leo then told us we would be going to a private apartment owned by his boss in order to prepare and eat our meal. The reason for this, he explained, was to show us that all of the items we would make that day could be easily made by us again when we returned to our own homes. Well played, Chef. Well played.
Chef Leo and Nicolette (who was like his sous chef), are both really great people. They were informative, patient and very fun and easy to be around. We started by chopping up the various veggies we had purchased (chanterelle mushrooms, broccoli romanesco, zucchini romanesco, onion, and a couple different types of tomatoes). 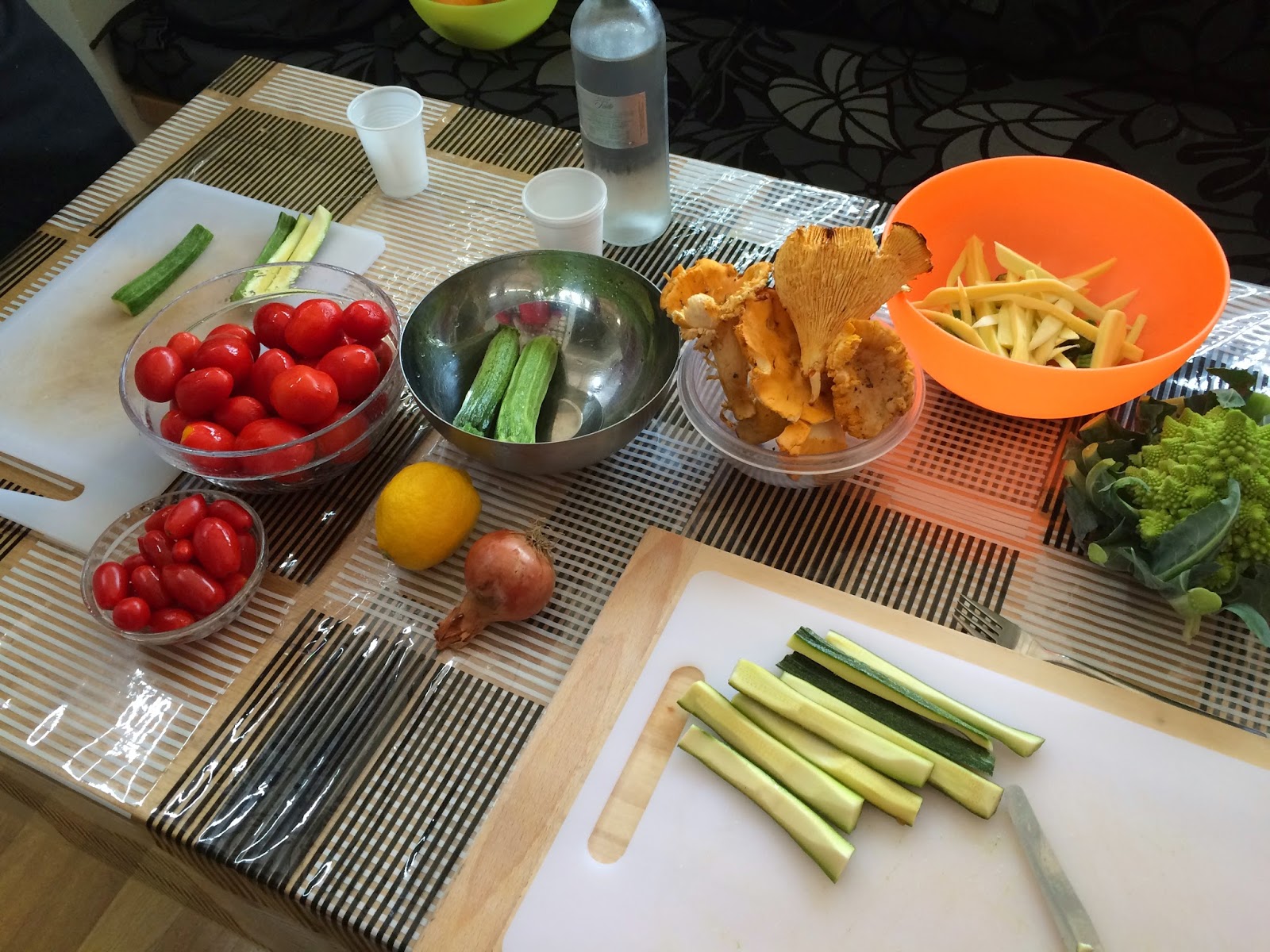 Next, we made fresh pasta. This is so incredibly easy to do, and the taste of freshly-made pasta cannot be beat. After you have made and eaten fresh pasta, “Barilla” will become like a four-letter-word to you. My friends, these two things are all you need to make fresh pasta on your own:
Once the pasta dough was ready, we turned it into three different types of pasta: cavatelli, tagliolini and ravioli (stuffed with zucchini and ricotta cheese). The cavatelli was, by far, the one I enjoyed making the most. I never had any idea how it was made into the shape and texture that it has, and I don’t mean to brag or anything, but, frankly, now I’m an expert. Okaaaaaaay, maybe that’s an exaggeration, but I do think I did a darn good job. Take a look and judge for yourself:
We made a simple tomato sauce for the tagliolini, a creamy (but not heavy) sauce for the ravioli, and an amazing tomato, mushroom, onion and guanciale sauce for the cavatelli. For those of you who don’t know, guanciale (pronounced “WHAN-chall-eh”) is like bacon on flavor-steroids, and it comes from the cheeks (or jowls) of the pig. You may think that sounds gross, but the taste is outstanding. If you like bacon, you really must try guanciale. It is a component of Amatriciana sauce, which is a very common thing to find on menus across Rome.
Next, we made veal saltimbocca (which translates into English as “jumps in your mouth”). Again, I was astounded at how simple this was to make. Take a thinly pounded piece of veal, put a sage leaf on it, top it with a piece of prosciutto, dredge it in a bit of flour, then fry it up for 3-4 minutes in a light amount of olive oil and butter. Sublime.
The cooking was finished and the food plated on the apartment’s rooftop terrace, which was outfitted with a cooktop that held a four burner stove and vat of boiling water. Here are the results of our labor: 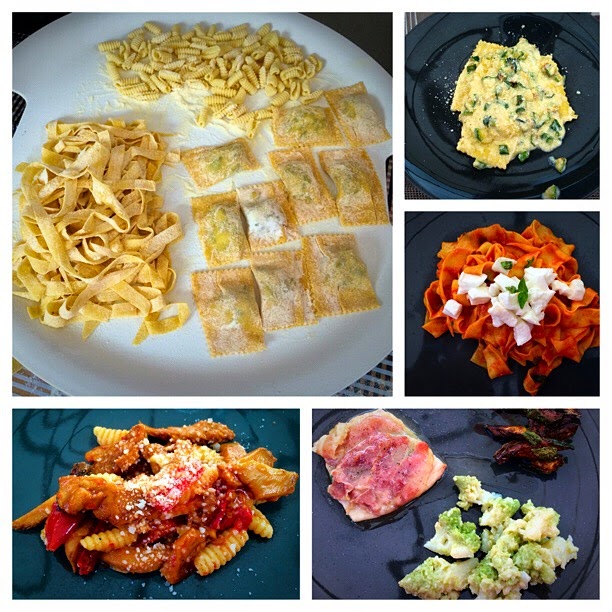 And, to top it all off (no pun intended), this was the view we got to enjoy while eating all the delicious food: 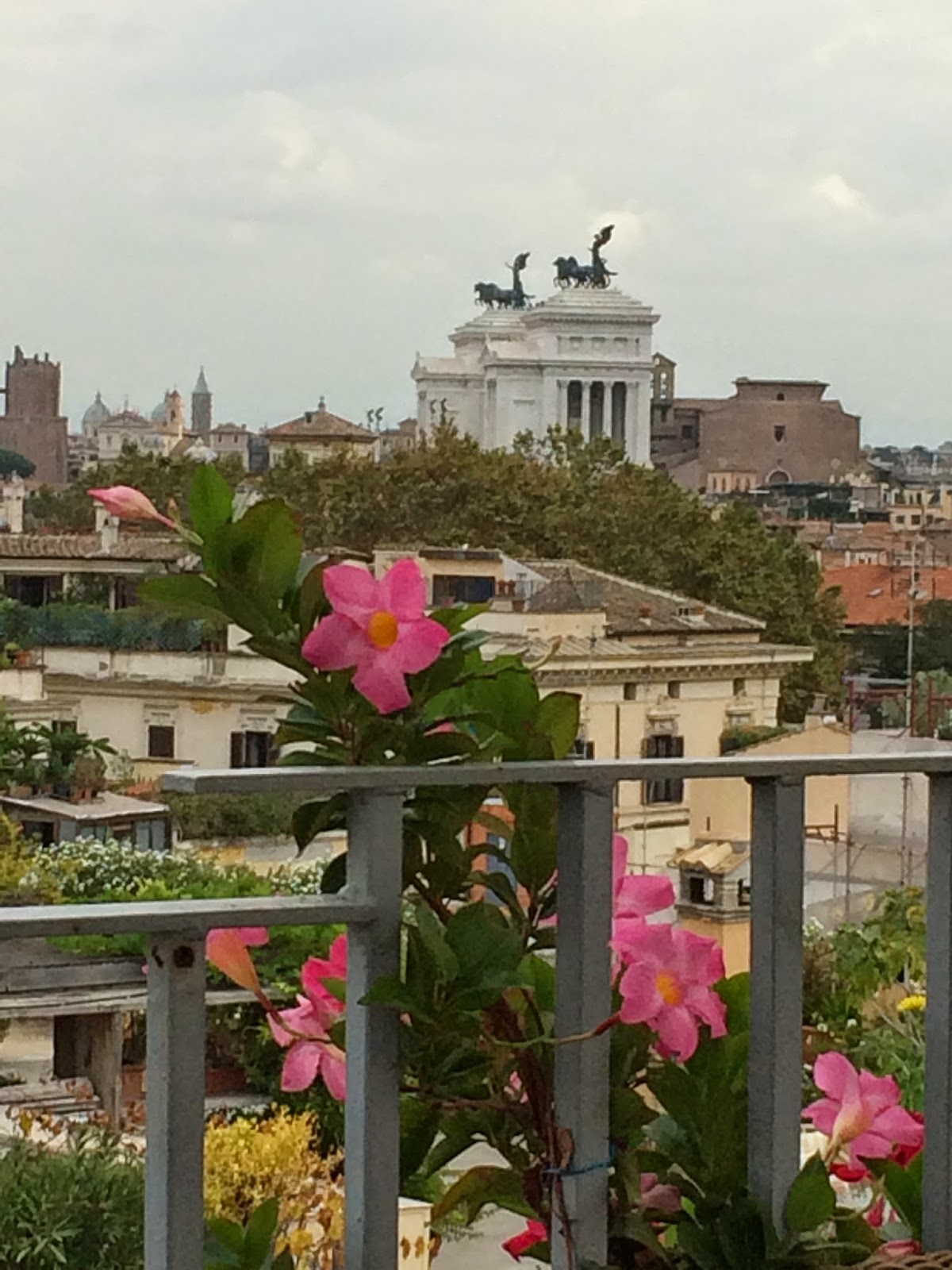 The class ran a little more than half a day. We met at 9:30 a.m., and finished eating our lunch at around 2:30 p.m. While I would absolutely recommend this class as something really different and fun to do in Rome, if you are visiting Rome for the first time and will only be there a few days, you will likely have plenty of other things to see and do. I would save this for a second or third (or fifth) visit, or maybe if you are staying in Rome for longer than a week on your first visit.
On a side note, we did end up having dinner at the restaurant where Chef Leo is the king of the cucina, and had a great time. I will share all the details in a future post about my top dining experiences in Rome! In my next post (coming Sunday) I will tell you all about the other one of my top two favorite things we did!
Have you ever taken a cooking class while in Rome (or any other country)? What are some of your favorite “off the beaten path” things to do? I’d love to hear about them in the comments below!
*Viator is a “re-seller” of tours/classes/etc. in many different countries that are actually run by local companies, so you do pay an upcharge when you book through them (Viator). Personally, we have used Viator several times in Italy, France and England, and had very good experiences. You do not know what local company is actually running the tour until AFTER you have signed up and paid for it on Viator. This particular cooking class was given by Carrani Tours/Fabiolous Cooking Day, and I recommend them very highly.

« All Roads Lead to Rome
A Virtual Journey Back in Time »