Wondering if you should add Lisbon to your list of places to go? Well, stop wondering…the answer is yes! As the second oldest capital in Europe (Athens has it beat) and one of the oldest cities in the world, Lisbon is packed with history and culture. Its relative compactness makes it a perfect city for a short break – but its Mediterranean climate, friendly inhabitants and overall beauty will make you want to stay longer!
Here are a few things that should be on your “must-see” list when you visit Lisbon:

Monument to the Discoveries

Built on the bank of the Tagus River in 1960, this gorgeous monument was built to mark the 500th anniversary of the death of Prince Henry the Navigator (that’s him at the head of the line in the picture below): 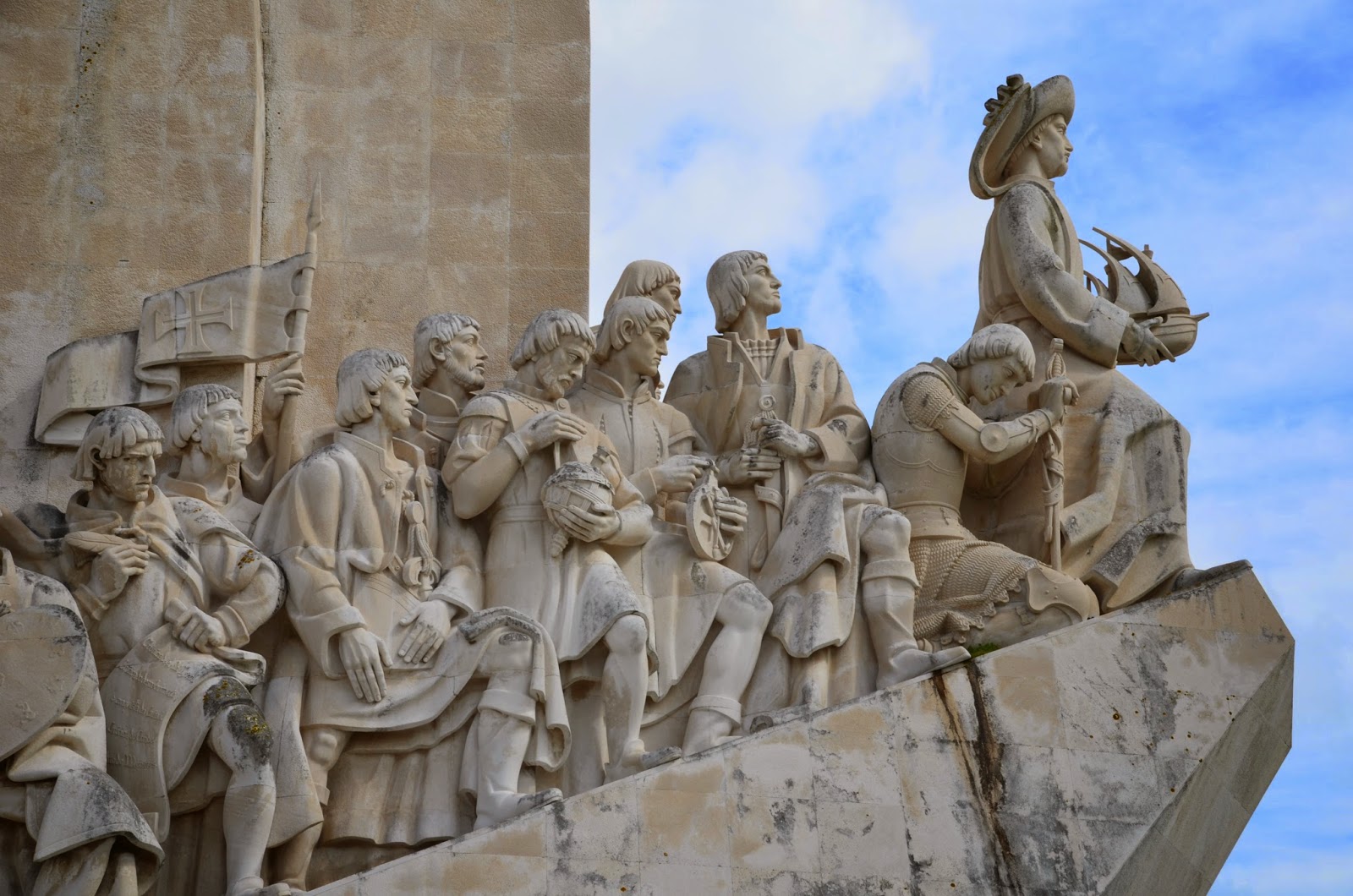 The shape of the monument represents a ship with its sails, and includes sculptures of several other very important Portuguese explorers, including Vasco da Gama and Magellan. There’s an exhibition space inside the monument and also an elevator that takes you to the top. Don’t leave without going up!

Spend a few minutes enjoying the beautiful view of the city as well as a great perspective on the pavement in front of the monument that is a beautiful mosaic compass and map of the world that details the routes taken by the explorers. 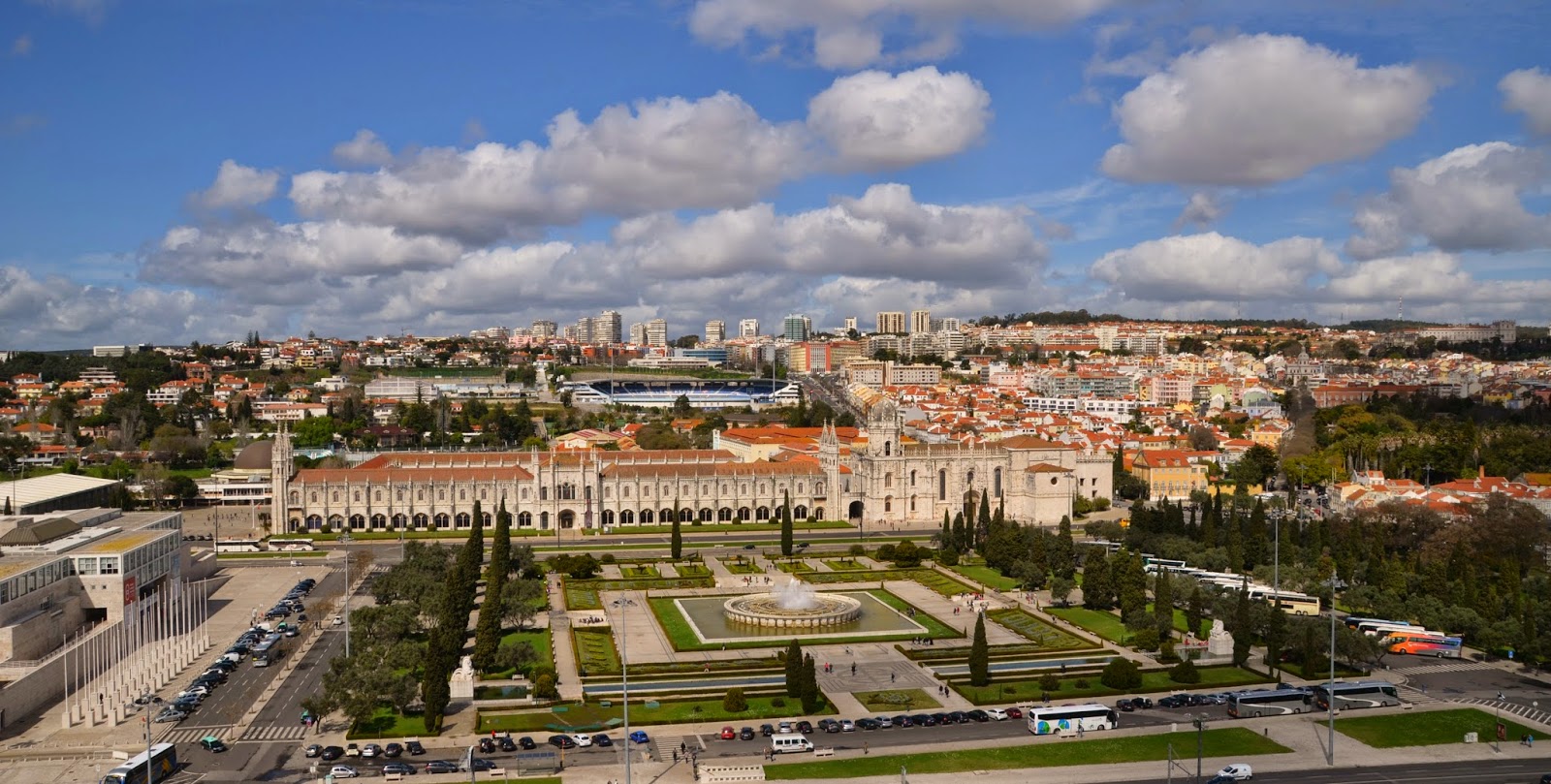 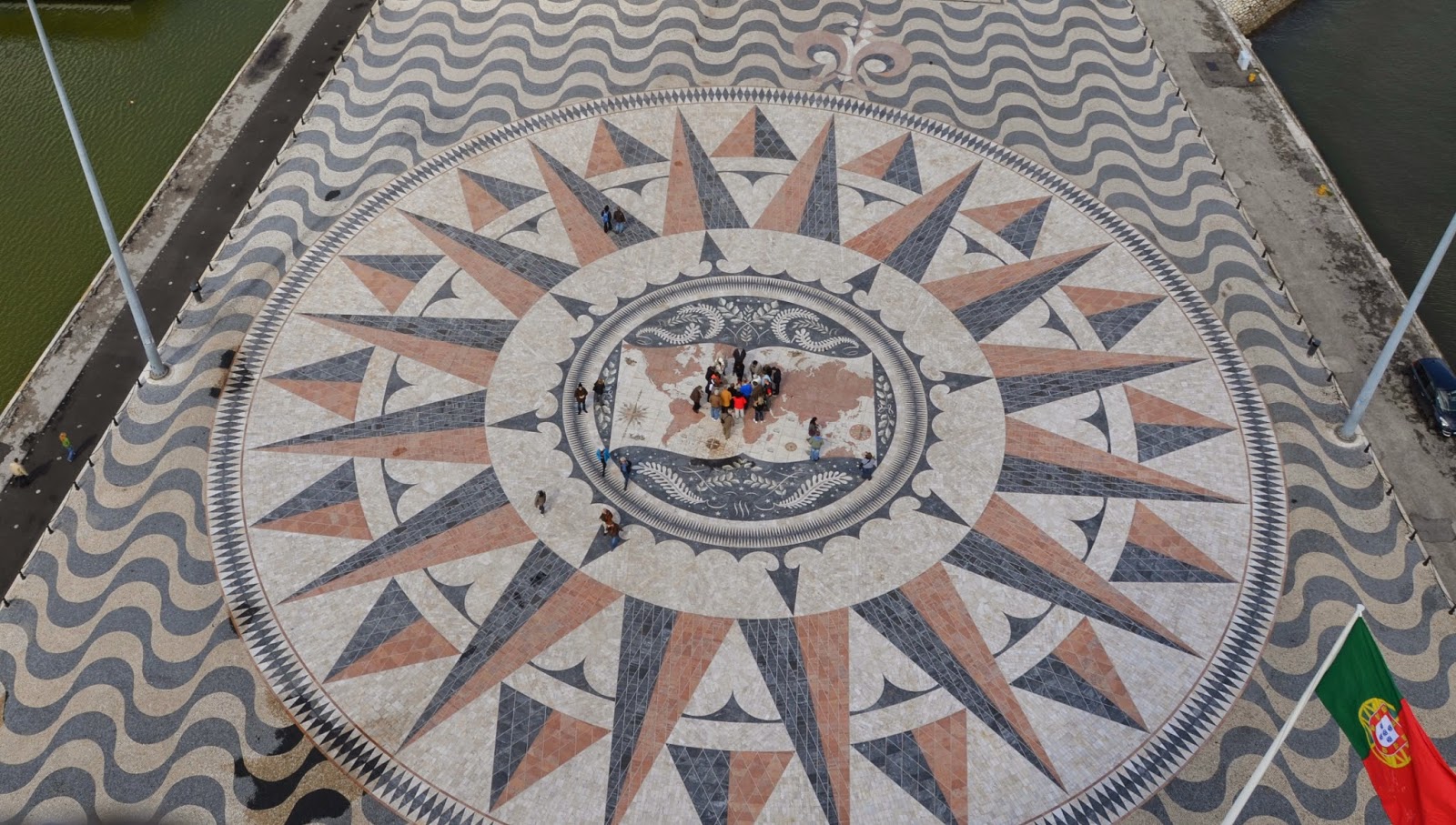 Nearby the Monument to the Discoveries is Belém Tower, a UNESCO World Heritage Site. Probably the most photographed monument in Lisbon, this tower was built in the 16th century as a fortress to guard the entrance to Lisbon’s harbor. It also served as the point of departure for many Portuguese explorers as they set out on their expeditions. 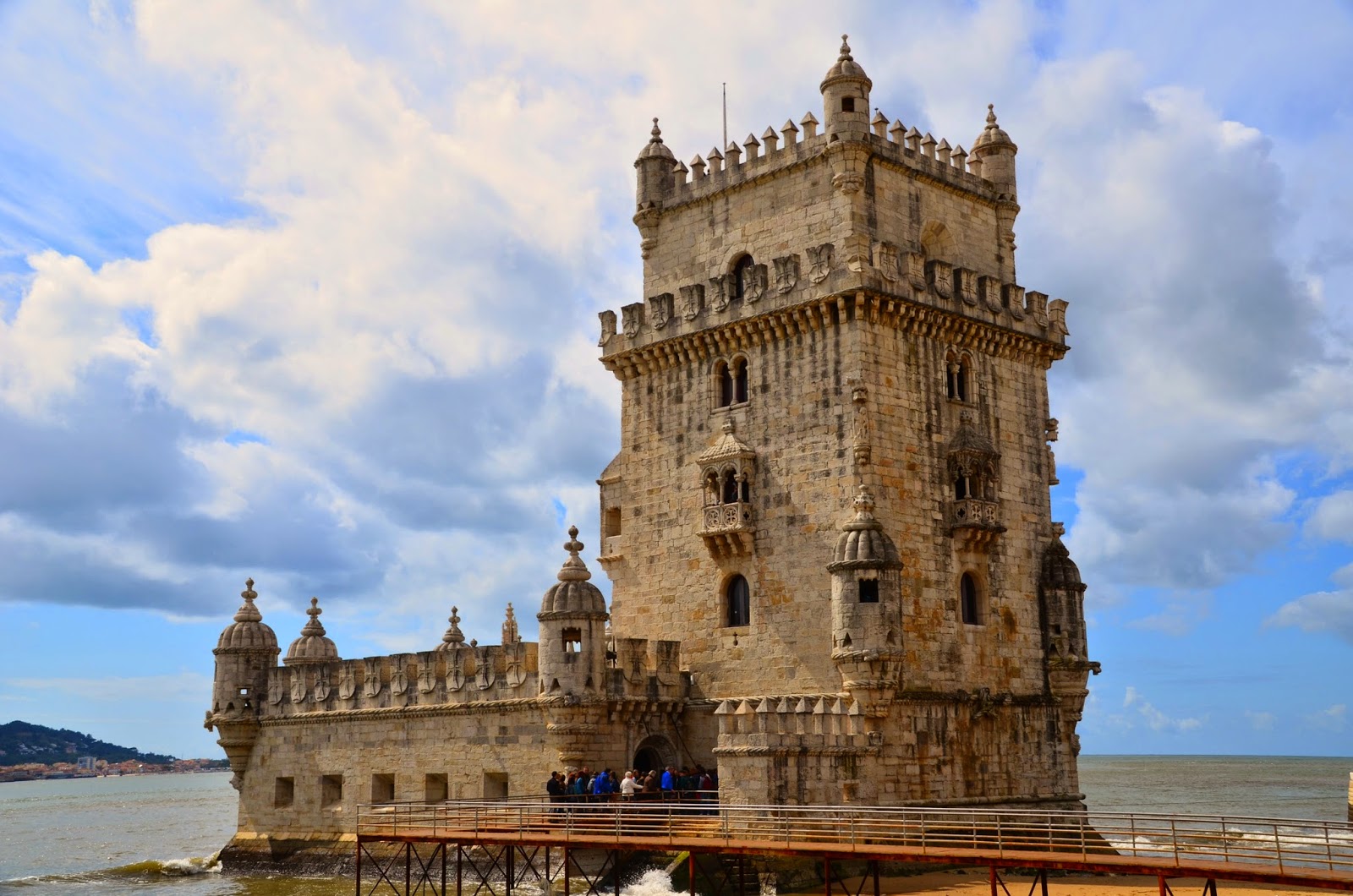 Visitors gain entrance to the tower via a walkway and can climb to the top for beautiful views of the city and harbor.

Also a UNESCO World Heritage Site, construction on this beautiful monastery began in 1502 and took almost 40 years to finish. It is very close to both Belém Tower and the Monument to the Discoveries, and could be easily visited on the same day. Though a bit weathered-looking on the outside, the inside of the church is beautiful – filled with vibrantly colored stained glass windows and intricate sculptures. It also serves as the final resting place of many members of Portuguese royalty, as well as Vasco da Gama (pictured below). 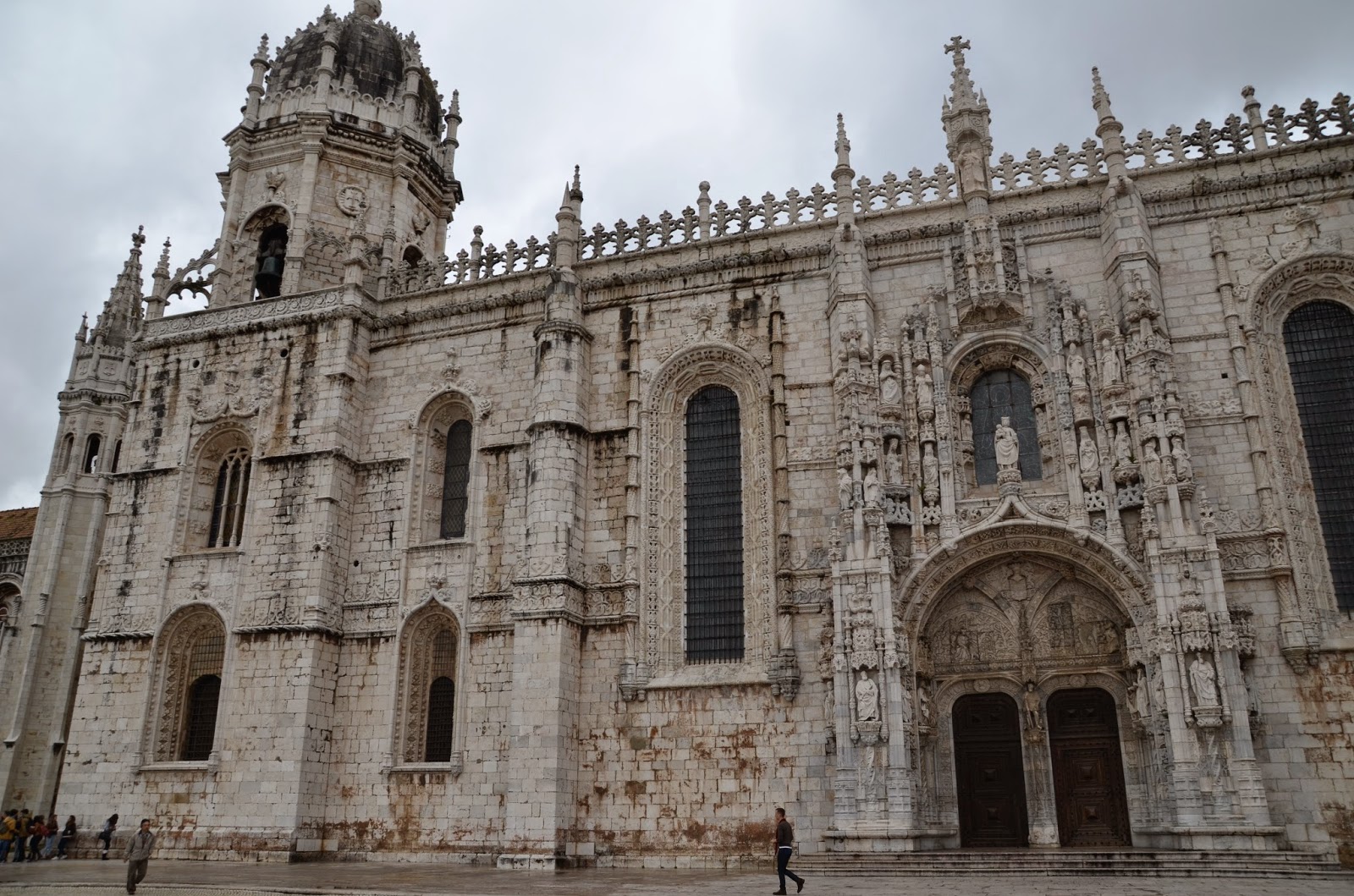 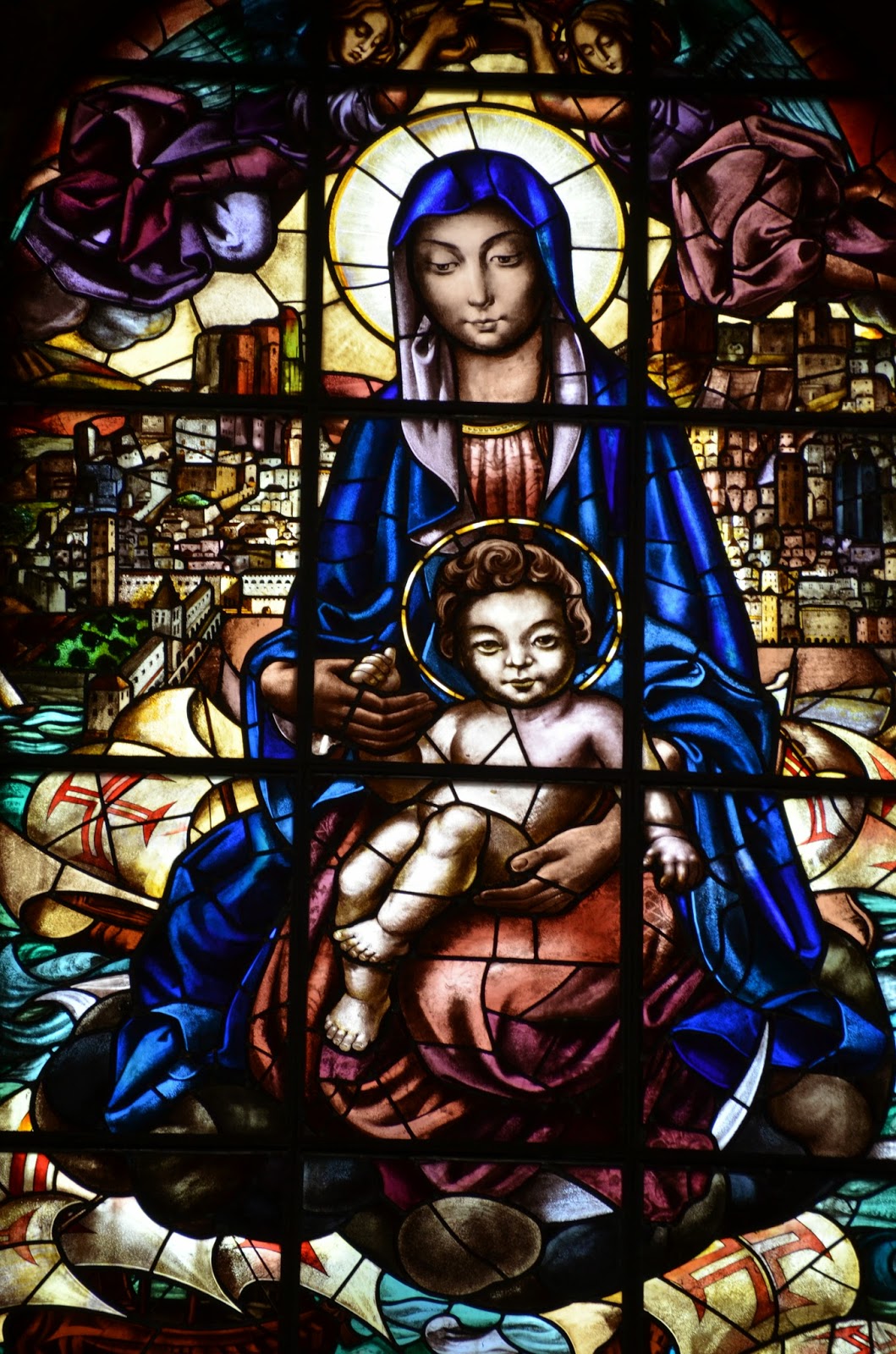 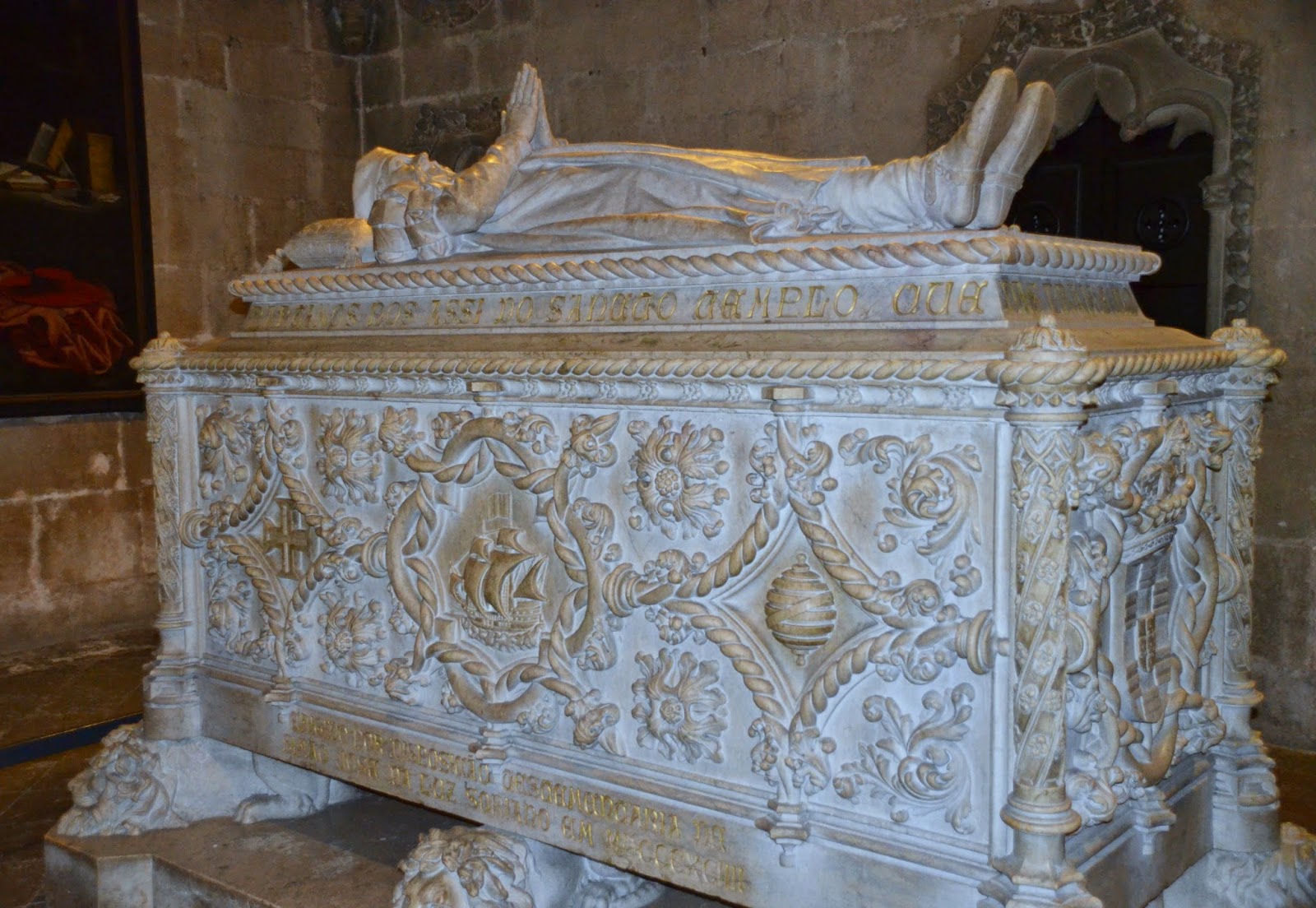 The Ground Beneath Your Feet

Tiles are everywhere in Lisbon. Beautiful, hand-painted tiles can be found both for sale in stores, and as part of the architecture on many of the buildings. 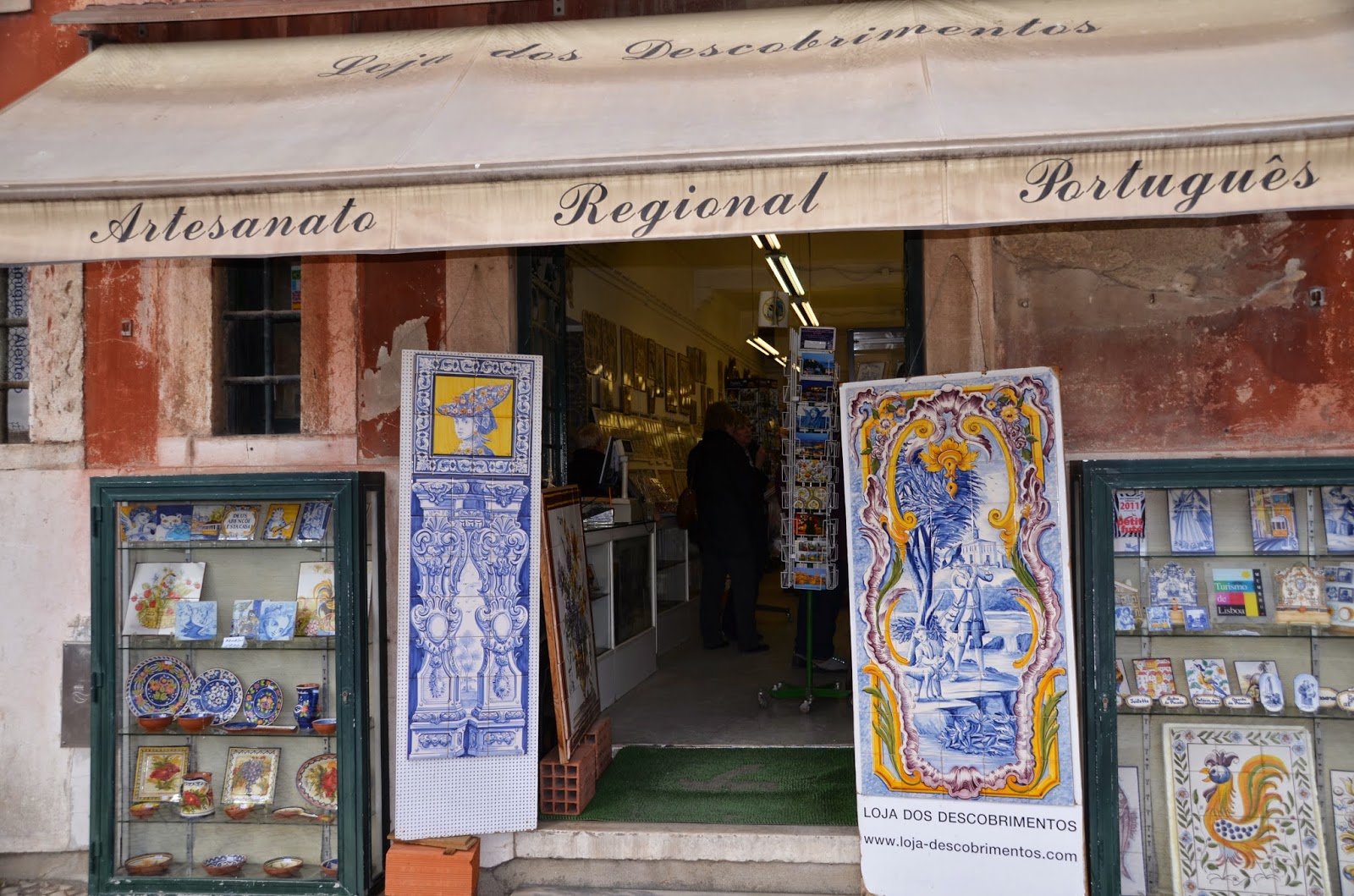 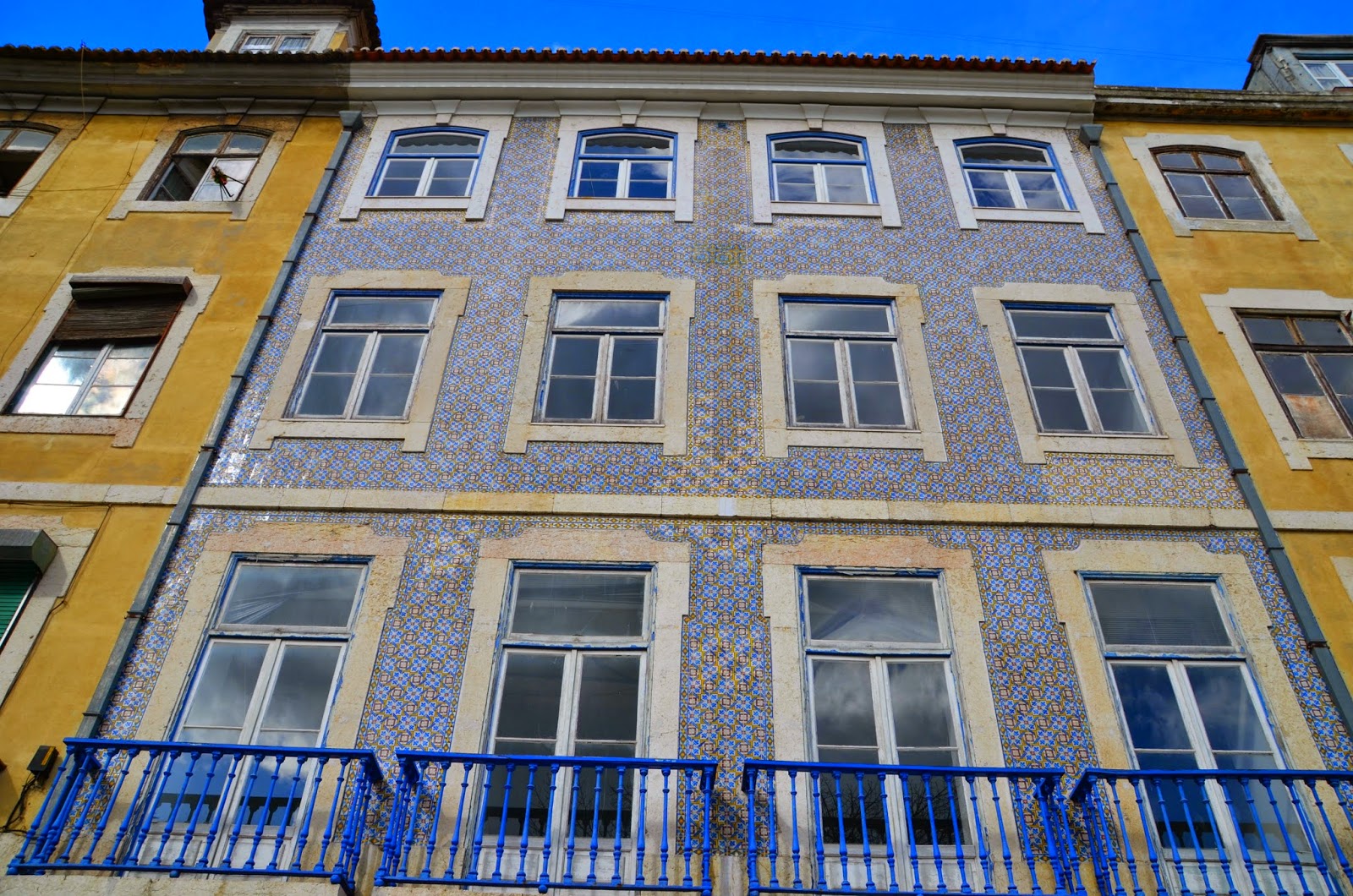 But what I liked the most were the beautiful sidewalks made of basalt and limestone. Known as Calcada Portuguesa (“Portugese Pavement”), they are mostly black and white and range from intricate designs to actual pictures and words. The first photo below is of Rossio Square, located in the city center and a place you should definitely visit – even just for a walk through. 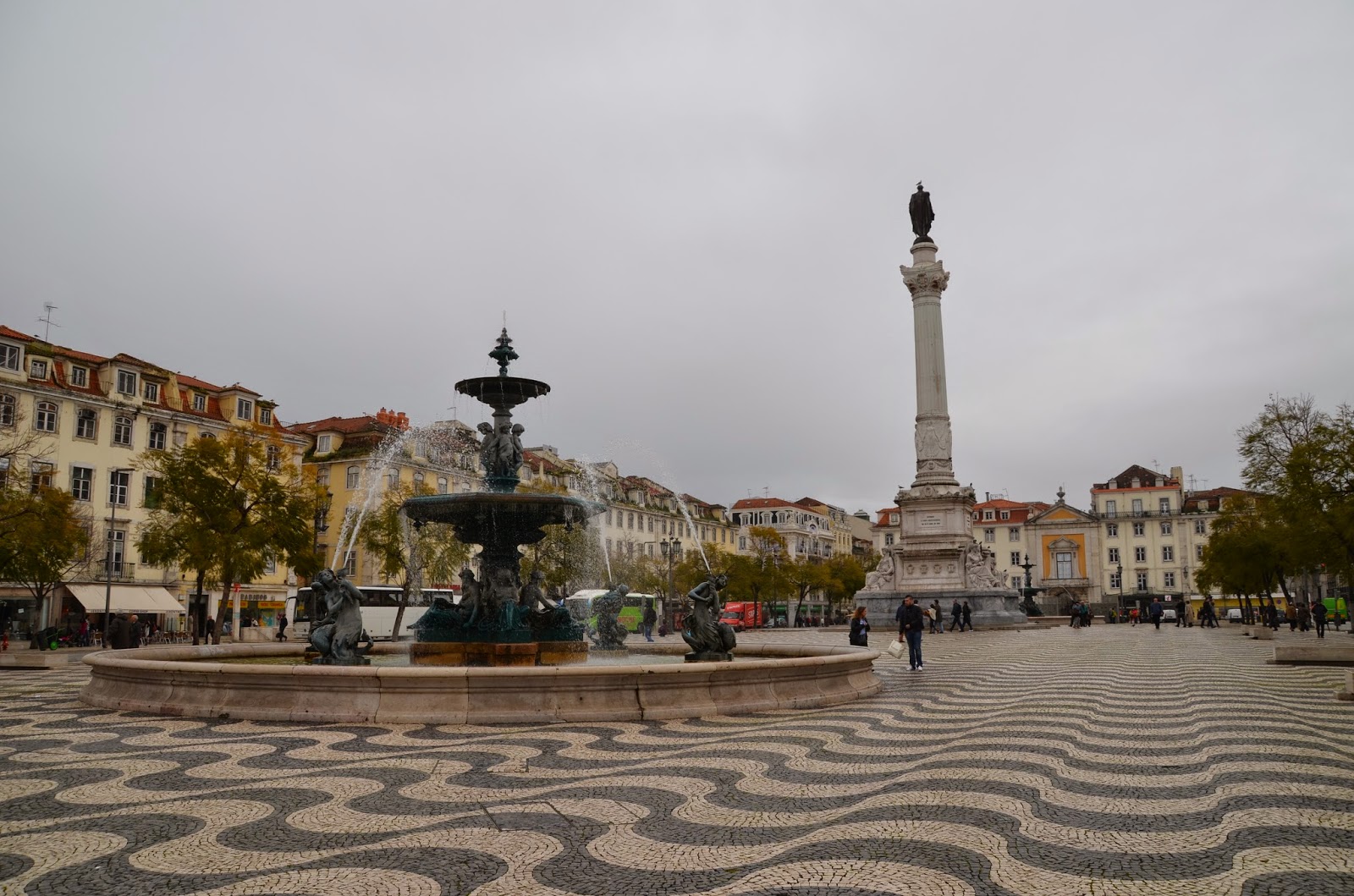 Here’s part of the sidewalk along Avenida da Liberdade: 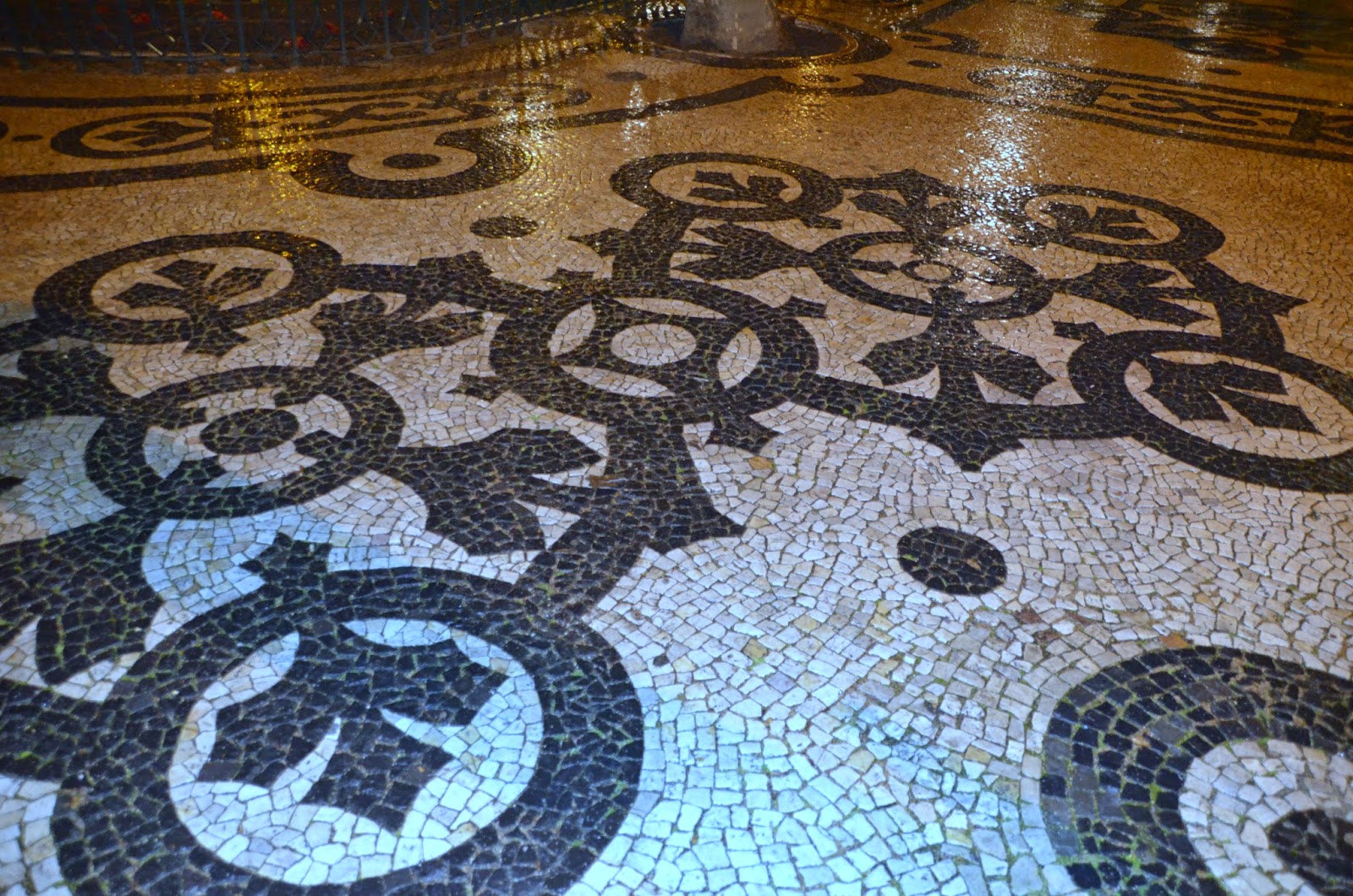 Lisbon is a fascinating and beautiful city. Neighborhoods like the Alfama, Barrio Alto and Chiado districts each offer something different to visitors. Cities like Fatima and Sintra are easily reached as day-trips.
In addition to the multitude of things to see and do, Lisbon also offers delightful delicacies that shouldn’t be missed. I’ll be covering some of these in my next post, so check back soon!

« Four Things Not to Miss in Madrid
The Flavors of Lisbon »