Visitors are so divided over Naples, Italy. When I go on travel forums I always get a chuckle from the debates that rage over this 2,000 year-old city. Some say it’s a filthy, crime-ridden, corrupt waste of time, while others fall in love with the grit, the chaos and the hidden beauty. My mom and I spent a half day in Naples after a visit to Pompeii a few years ago, and my opinion of it falls somewhere in between the two extremes. 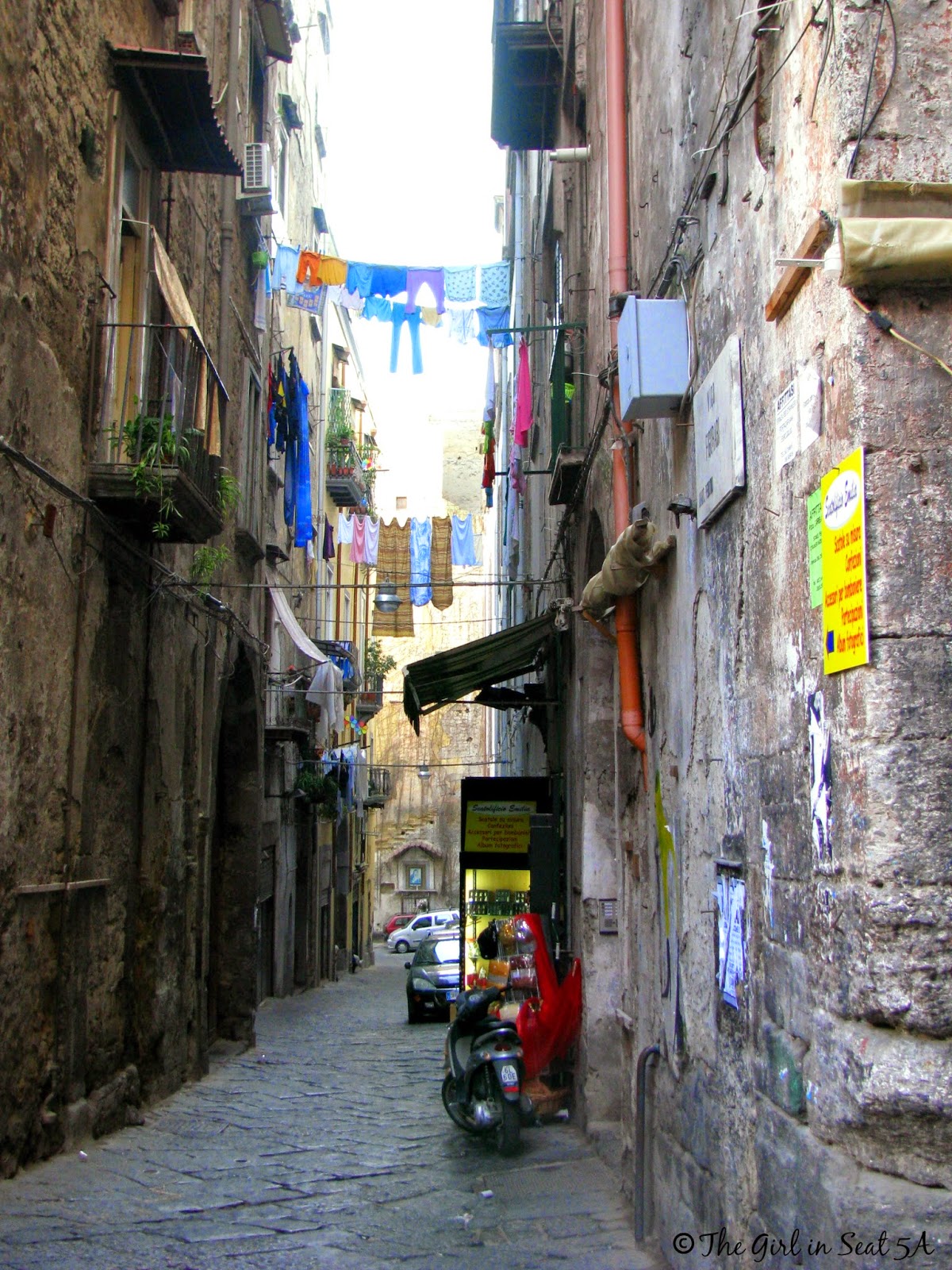 Is it dirty? Yes. Is it crime ridden? Yes. Is it jammed with cars, scooters and people? Yes. Is there beauty to be found there? Yes. While I don’t think I could spend days and days there (though some do, and love it), I definitely feel it is worth a day trip, especially if you are based nearby in Sorrento, like we were. Chances are you might be flying in and out of Naples anyway, so why not spend some time? If you do, here are a few things you shouldn’t miss!

If, like me, you are a lover of Italian sculpture, this chapel is not to be missed. Built in the 17th century by Raimondo di Sangro, the Cappella is not large, but contains one of the most amazing sculptures I have ever seen: The Veiled Christ. The exquisite detail and realistic quality of this sculpture make you feel that if you were to reach out and touch the veil, you would encounter softness (but don’t try this…the statue is roped off and there are guards watching, so I don’t think it would end well if you did).

There are many other beautiful sculptures in the Capella as well as two “anatomical machines” located in the underground chamber. These “machines” are actually the skeletons of a man and a woman with their artery and vein systems almost completely intact. Whaaaa? Yep, it’s true. Well, maybe. Some people believe they are the real thing, some think they are brilliant reproductions. The skeletons themselves are real enough, but the jury is still out on the veins and arteries. Either way, they are pretty fascinating.

Admission to the chapel is 7 euros. Note that it is closed on Tuesdays and no pictures are allowed.

Spaccanapoli and the Heart of the City

We spent most of our time in Naples in the Spaccanapoli area, which is the name for the long street that runs from Via Duomo to Via Monteliveto. To be honest, the guide/driver we had who took us to Naples (a native of Sorrento) told us to stick to that area just to be on the safe side. He couldn’t walk around with us because he couldn’t find a place to leave his car (or maybe he just didn’t want to). Either way, he cautioned us not to wander too far off the main thoroughfare.

It was the middle of the day and we never felt in danger. Just keep your wits about you as you would anywhere else and you’ll likely be just fine. Take a look at my post on safety while traveling for tips.

We walked around and strolled down the street that is packed with shops selling nativities (either entire sets or individual components): 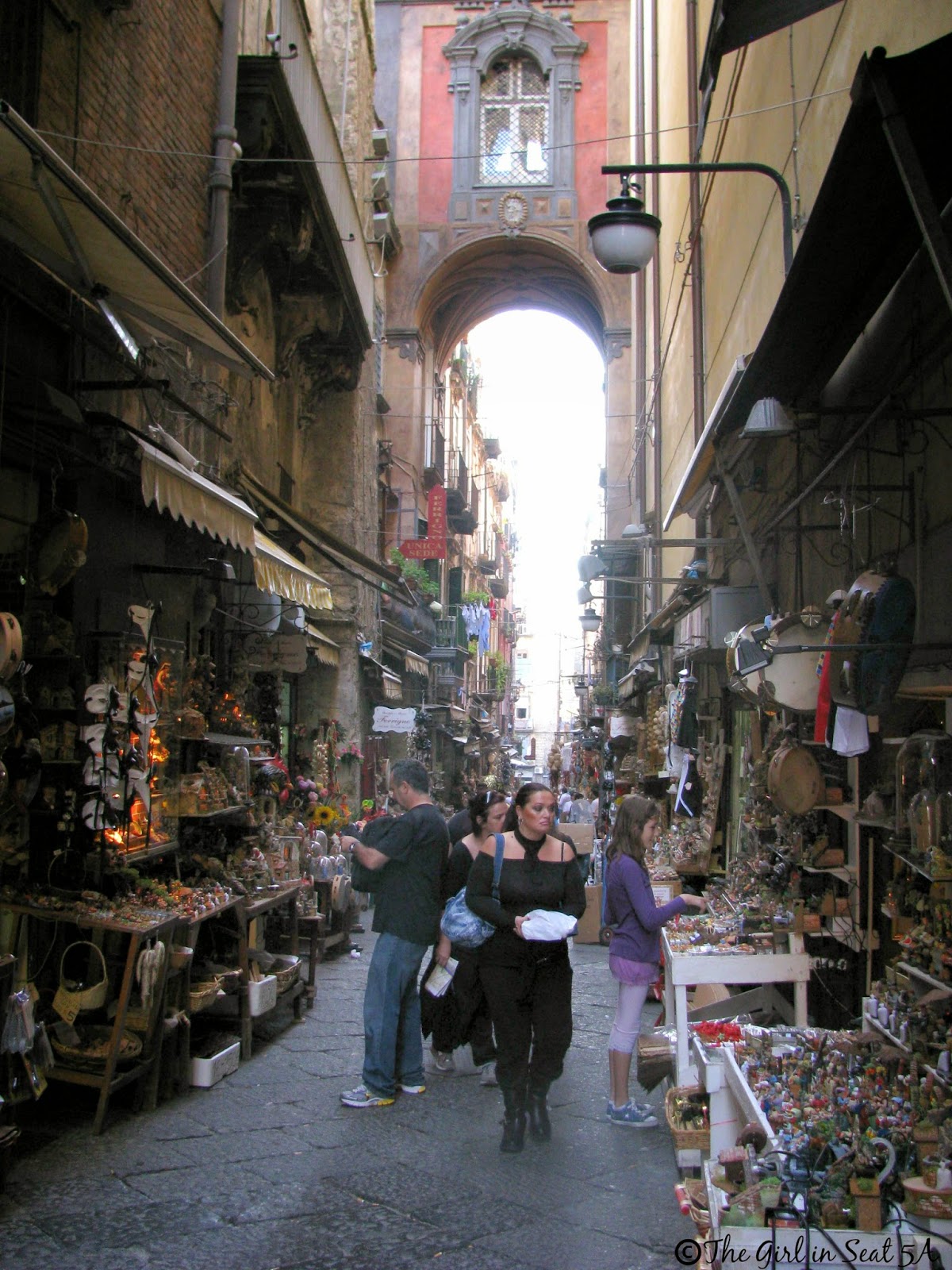 Stopped at a tiny pastry shop for a little snack: 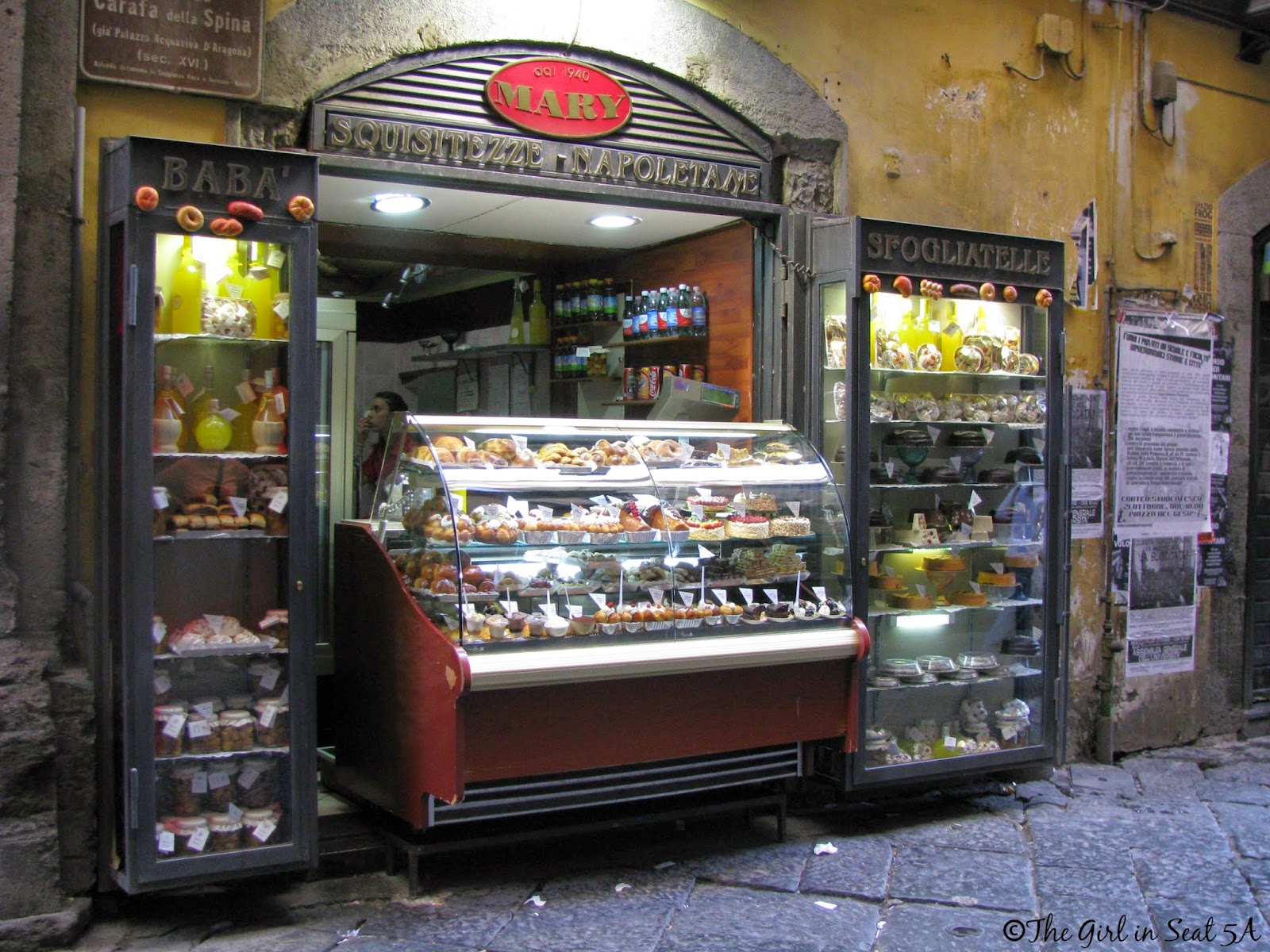 We also went to San Lorenzo Maggiore and toured around the archeological (scavi) site underground, which is believed to have been a Roman marketplace. It took about an hour and was very interesting.

When you are ready for a break from the crazy hustle and bustle of the city, step into the beautiful and peaceful Santa Chiara Cloister. Santa Chiara itself was founded in 1310, and the cloister around the same time period. However, in 1742, the cloister was transformed by Domenico Antonio Vaccaro into the beautiful garden you see today. The majolica tiles are still vibrant and gorgeous. 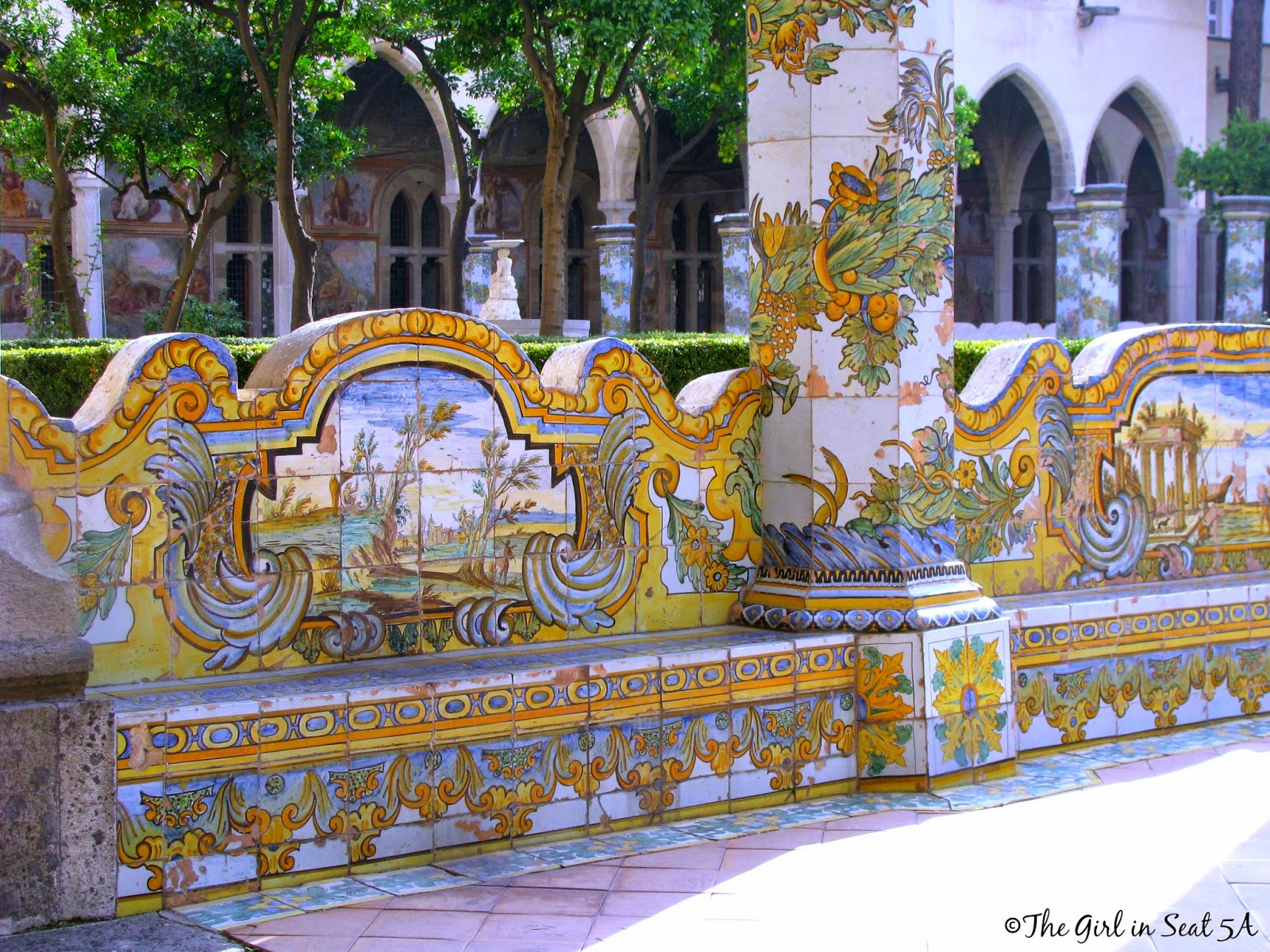 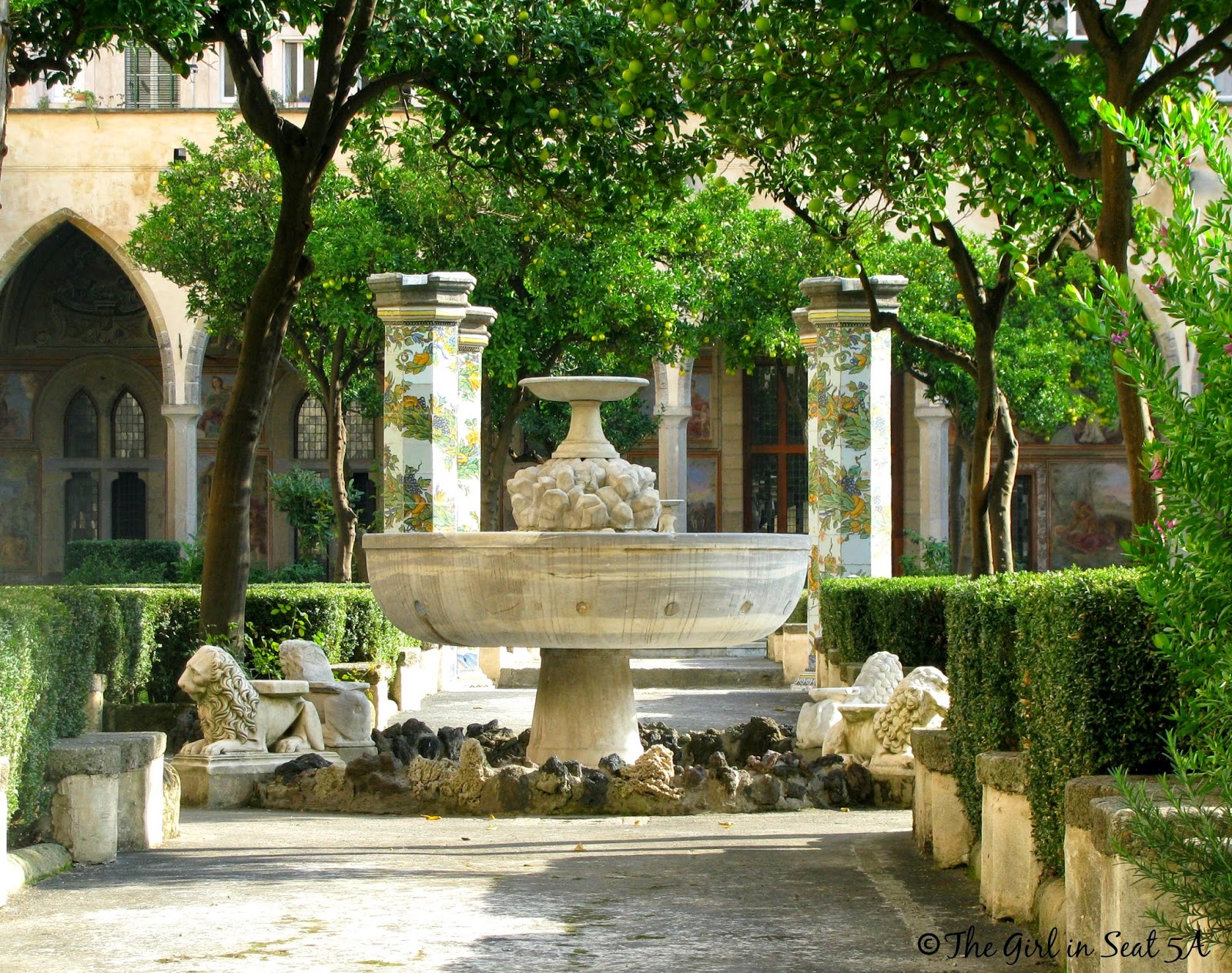 Naples is all of the things you have heard it is and more. The third largest city in Italy, it is an assault on all of your senses. But despite the negative things you might have heard, there are definite positives to be found as well. There were many other worthwhile things to see and do that we just didn’t have the time for, such as visiting the duomo, the Archeological Museum, the Capodimonte (royal palace), Castel Nuovo and, of course, eating authentic Neapolitan pizza!

Have you been to Naples? Are you a lover or a hater (or somewhere in between)?

« Street Art: A Paris Invasion
Sorrento: Perfecting The Art of Chilling Out »