In my initial post about river cruising, I said that one of the downsides is the limited amount of time you get to spend in some of the cities you visit. Sometimes, though, that actually turns out to be an upside instead. If a place you visit turns out not to be your cup of tea, you can hit the highlights, and then skedaddle. I found that to be the case with both Padua and Bologna, two of the cities we visited on our Venice and Po River cruise.

As a self-titled “travel blogger”, it almost feels wrong to be anything less than enthusiastic about a place I’m writing about. I feel like my my job is to talk about how wonderful all places I’ve been lucky enough to visit are, and tell you why you should want to visit them, too. But sometimes, it just doesn’t work out that way!

Even though we did see/do a couple pretty great things in both places, all in all, the half-day visits to both suited us just fine. Let’s start with Padua. 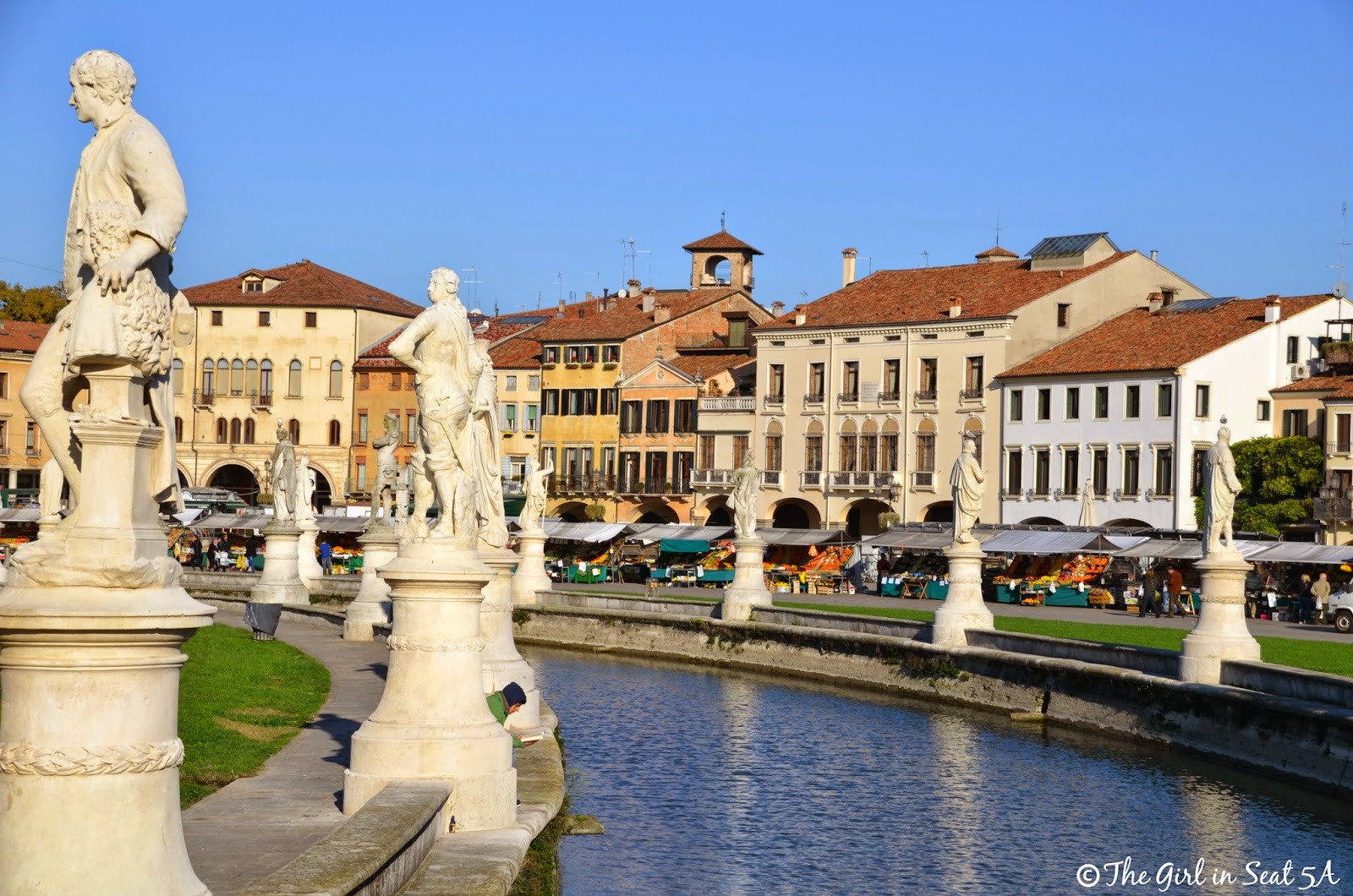 About a 30 minute train ride (40 minute bus ride for us), Padua is an easy trip from Venice. Our tour of the city began at Prato della Valle, pictured above. This huge square (which is actually elliptical in shape) is surrounded by a small canal, which is bordered by two rings of almost 80 statues. It’s a beautiful place where you will find people relaxing, students reading or tourists just strolling around.

From there, we walked to the Basilica of St. Anthony. Padua is a not quite a small town, yet not quite a big city. The streets (especially those along the way to the Basilica) are filled with religious stores selling statues and other various items related to St. Anthony, who was (and still is) extremely important to the people of Padua. Most commonly referred to as the patron saint of the lost, St. Anthony was born in Lisbon around 1195, and died in Padua in 1231. Work on the Basilica began shortly thereafter in 1232, and was dedicated to St. Anthony.

Unfortunately, the exterior of the Basilica was undergoing extensive renovations when we were there, and pictures inside are forbidden, so I don’t have any to share with you except this one: 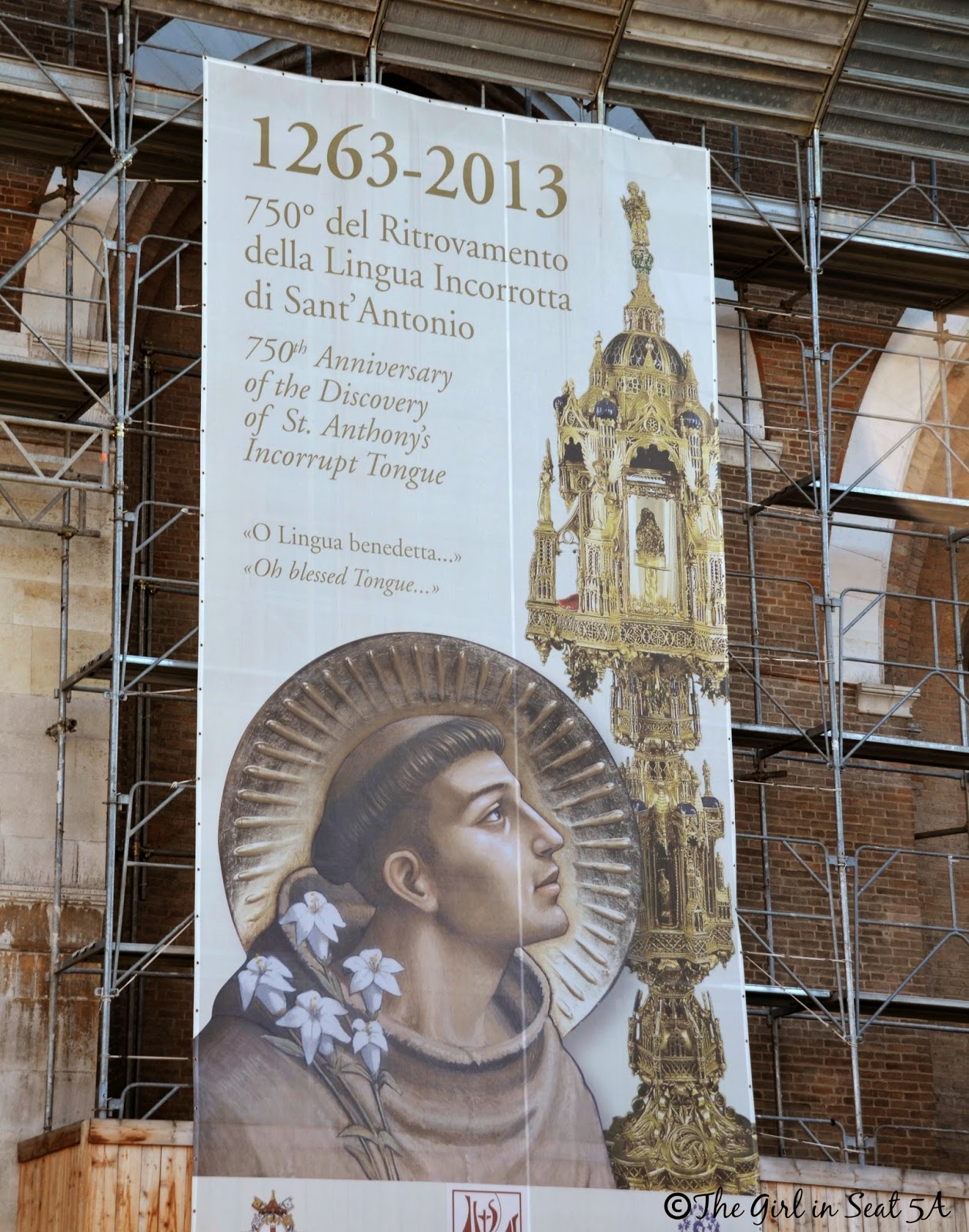 The banner is referring to the first astounding thing that happened regarding the saint after his death. In 1263, just about 30 years after St. Anthony died, St. Bonaventure examined his body and found his tongue to be “uncorrupted” (meaning it hadn’t deteriorated at all). In 1981, 750 years after his death, Pope John Paul II permitted another scientific examination to be made to the body of St. Anthony. It was found to be in an amazing state of preservation with his vocal apparatus completely intact.

In the Chapel of the Relics, visitors can now see St. Anthony’s tongue, jawbone and vocal chords. Because St. Anthony did so much preaching about love and forgiveness throughout his short life, the fact that these were the parts of him that remained so well-preserved seems fitting, albeit miraculous, to many. If you are Catholic, this Basilica is absolutely not to be missed. And even if you are not, the inside of the Basilica is absolutely gorgeous, and well worth a visit.

Next we walked through the town and passed by the university, which is famous for both its anatomical theater (where they conducted autopsies) and for having Galileo Galilei listed among its lecturers. He was one of the few who was allowed to teach in the Aula Manga (Great Hall) of Palazzo Bo. 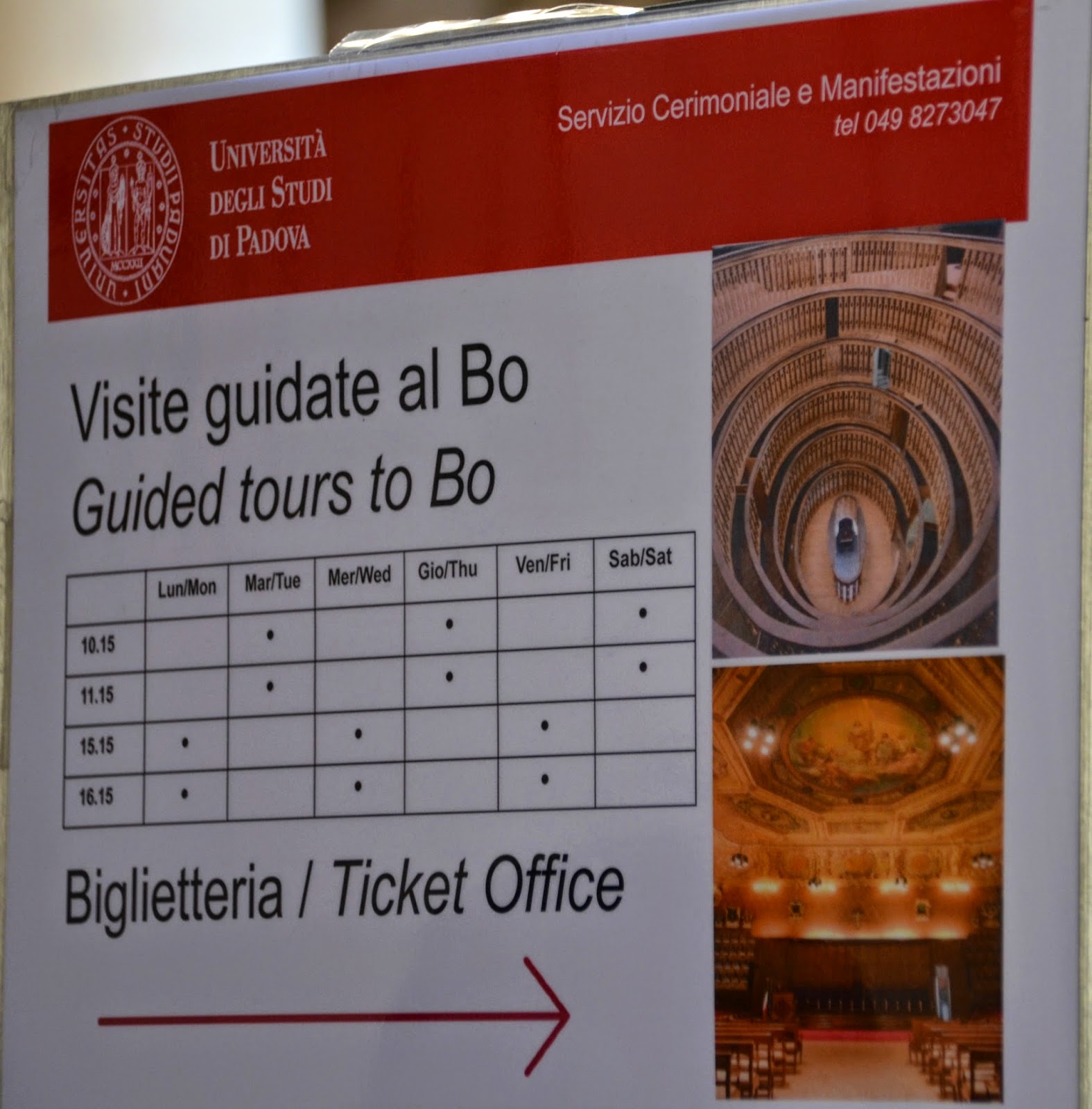 We then headed to the Scrovegni Chapel to see the famous frescoes by Giotto. The frescoes were completed around 1305 and are considered to be some of the most important masterpieces of Western art.

Anyone wishing to see the frescoes must make reservations at least a day in advance. Upon arrival, you are required to sit in an air-conditioned room (while watching an informational program about the chapel and frescoes) for 15 minutes so the climate can be properly stabilized. You then have a maximum of 15 minutes inside the chapel itself. All of this is very tightly controlled in order to preserve the frescoes – and again, no photos were allowed inside. I would definitely recommend a visit to the chapel. The frescoes are very beautiful – the colors remain incredibly vibrant.

Once our time was up at the Scrovegni Chapel, we had a chance to visit the open air market of Piazza dei Frutti. 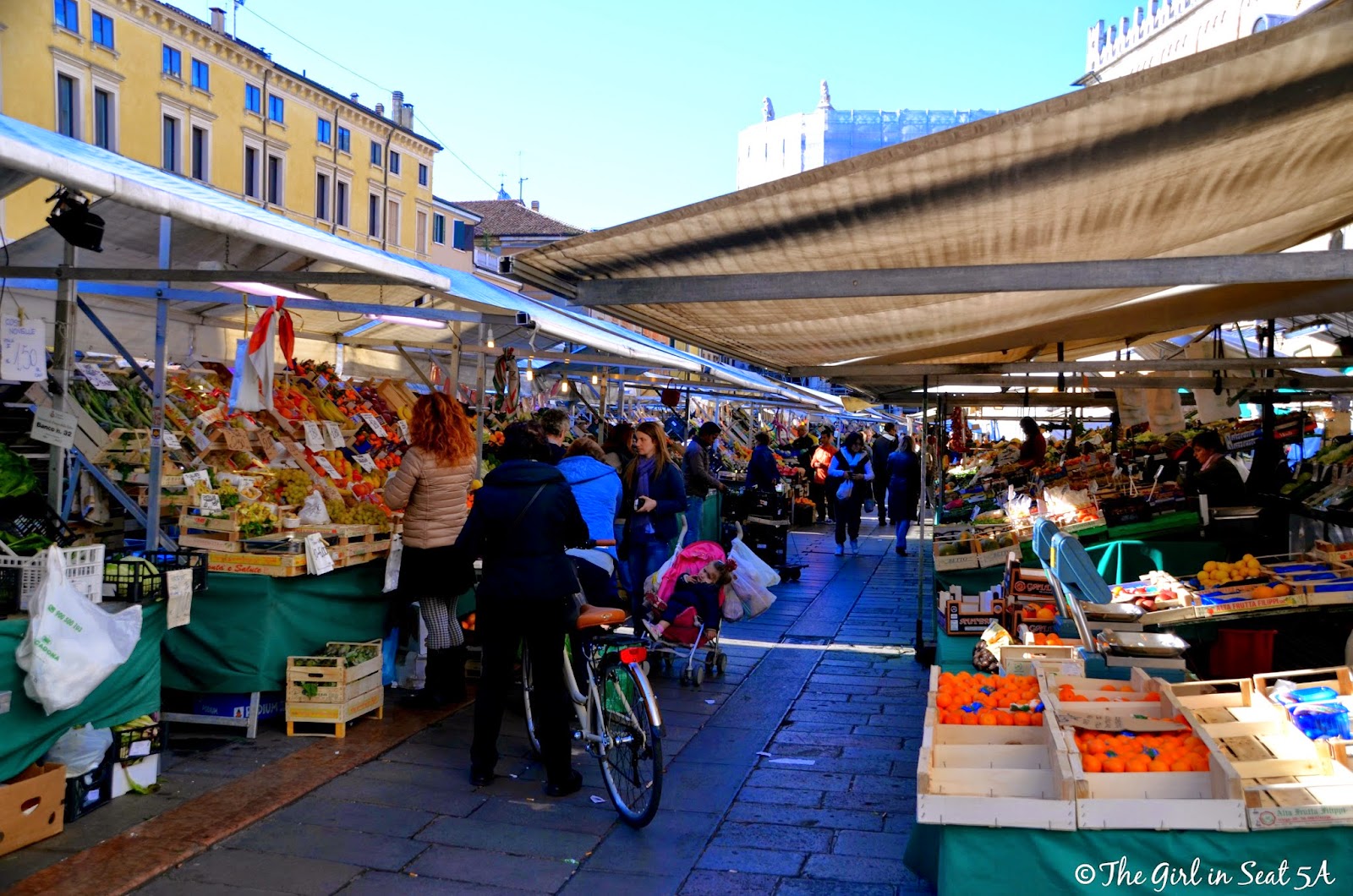 After that, we had the option to stay in Padua longer and take a later bus, or just head back to the ship. We decided to head back.

Another city we visited that really didn’t float my boat (no pun intended) was Bologna. We departed from Chioggia, and the bus ride took about an hour and a half. Home to the second oldest university in the world, Bologna is definitely a big city. 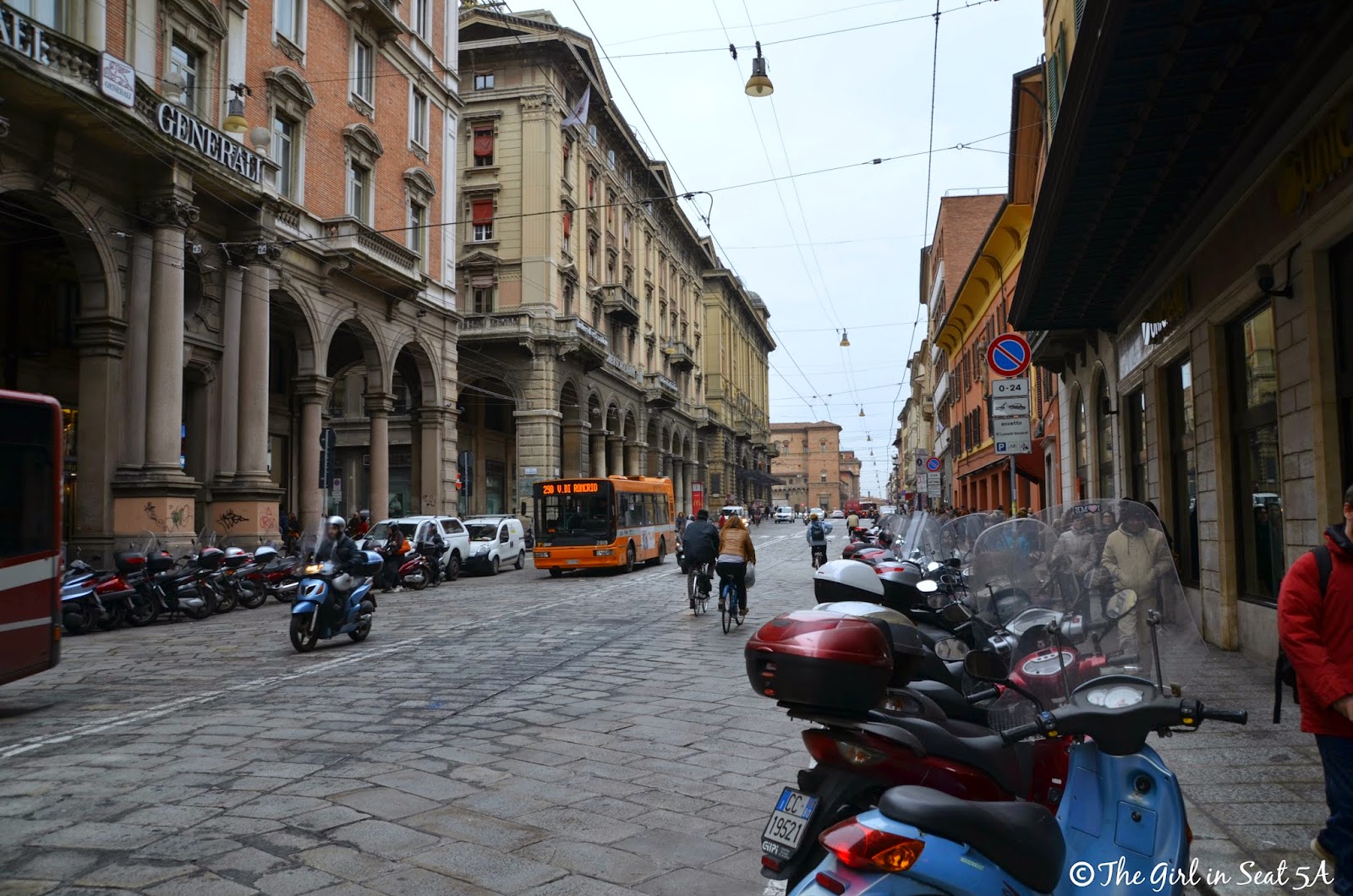 Our guide started by taking us on a short walking tour, telling us about Bologna’s history and pointing out things of note. When we got to Piazza Maggiore, the guide informed us that the next place we would visit was the Palazzo dell’Archiginnasio (also an anatomical theater), but our attention was diverted by the fact that that there was a huge chocolate festival going on in the piazza. 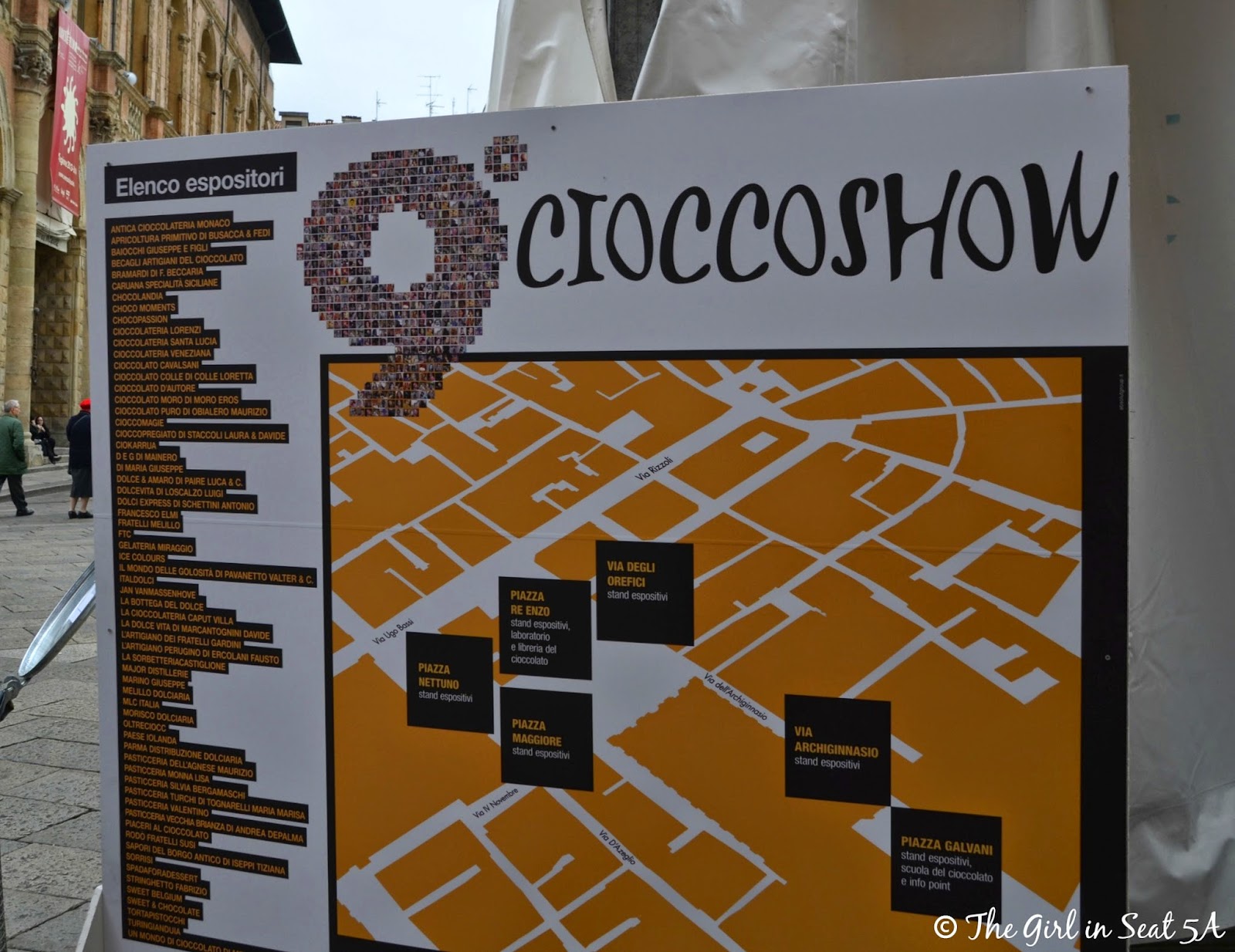 So we had very tough decision to make: go see a place where they used to cut up dead bodies, or eat lots of chocolate. Guess what we picked? 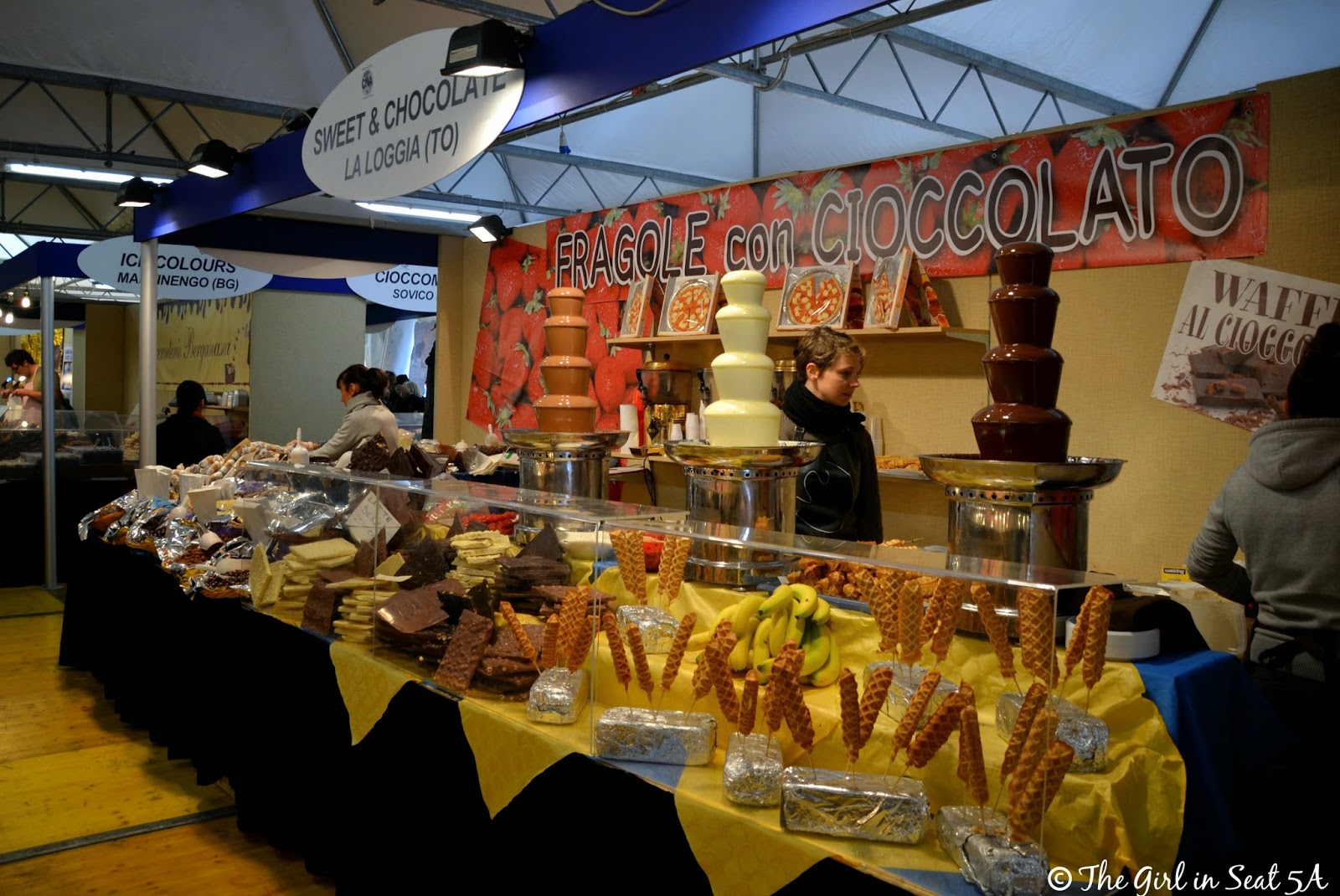 There was chocolate from all different regions of Italy, as well as from other countries. We spent about an hour walking up and down the aisles, tasting samples and making purchases. Everyone back home who got some fantastic chocolate upon our return was very grateful we didn’t go see the anatomical theater.

We wandered around for a little while longer, then it was time to head to the meeting place by the Due Torri, which means Two Towers (as a huge Lord of the Rings fan, I had hoped perhaps we had been magically transported to Middle Earth, but sadly, that was not the case). 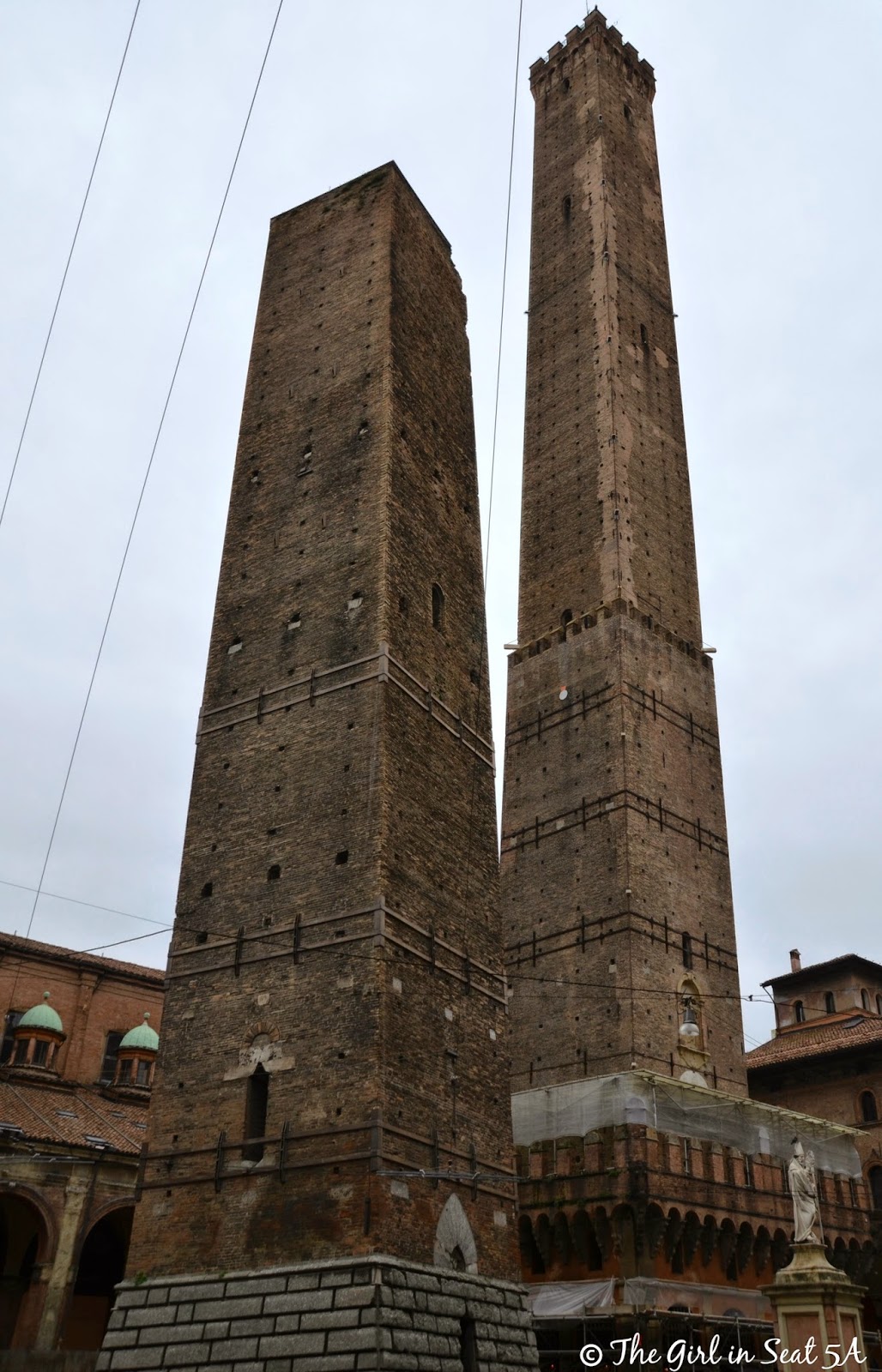 Now we headed off to what would be my favorite part of our Bologna visit: a pasta making demonstration and lunch at Cantina Bentivoglio. Since there were so many of us, we were split into to groups and got to watch an expert pasta maker (who was also extremely funny and entertaining) show us how she makes several different kinds of pasta for the restaurant. 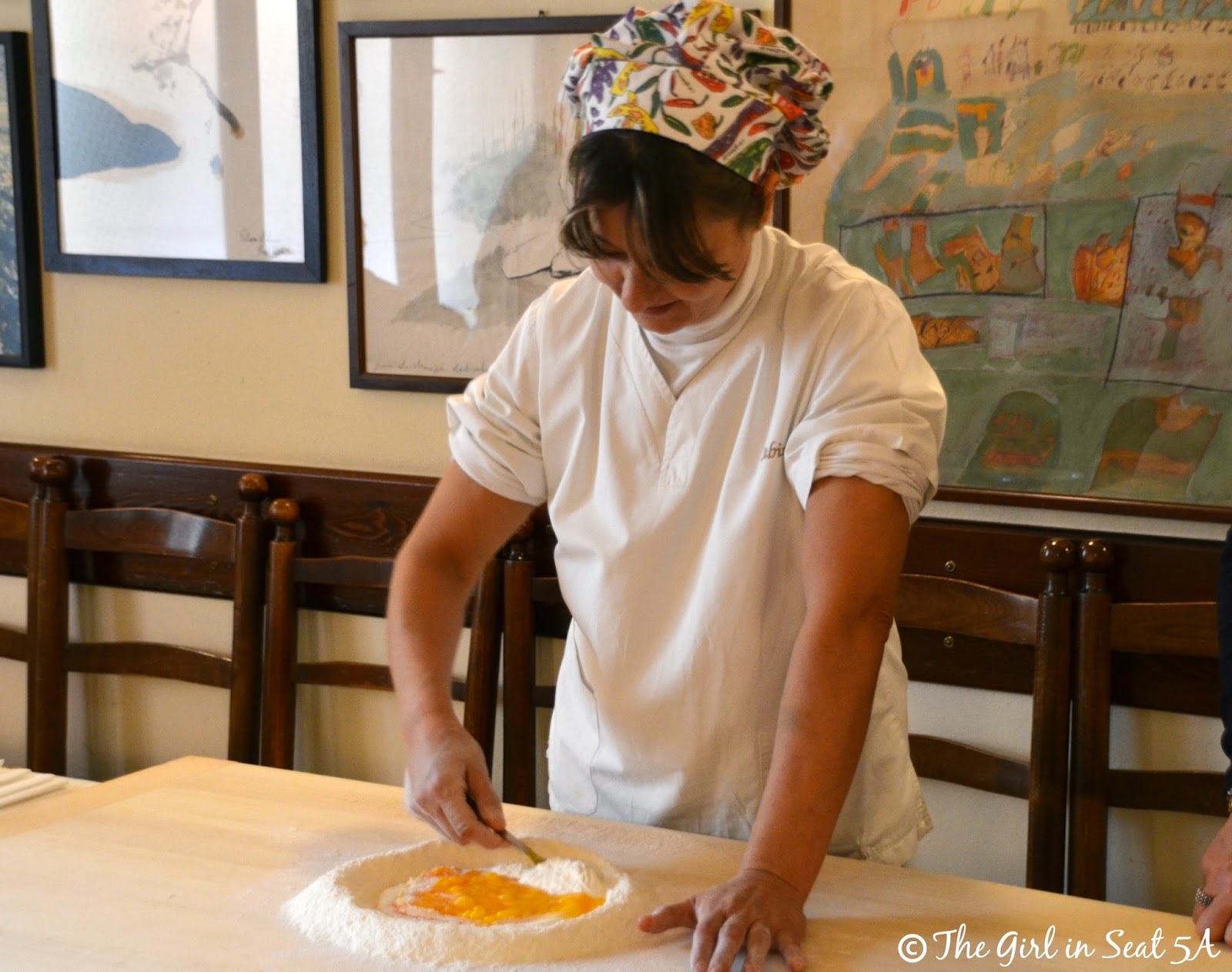 Watching her work was amazing. She made everything seem effortless, but the end products were gorgeous: 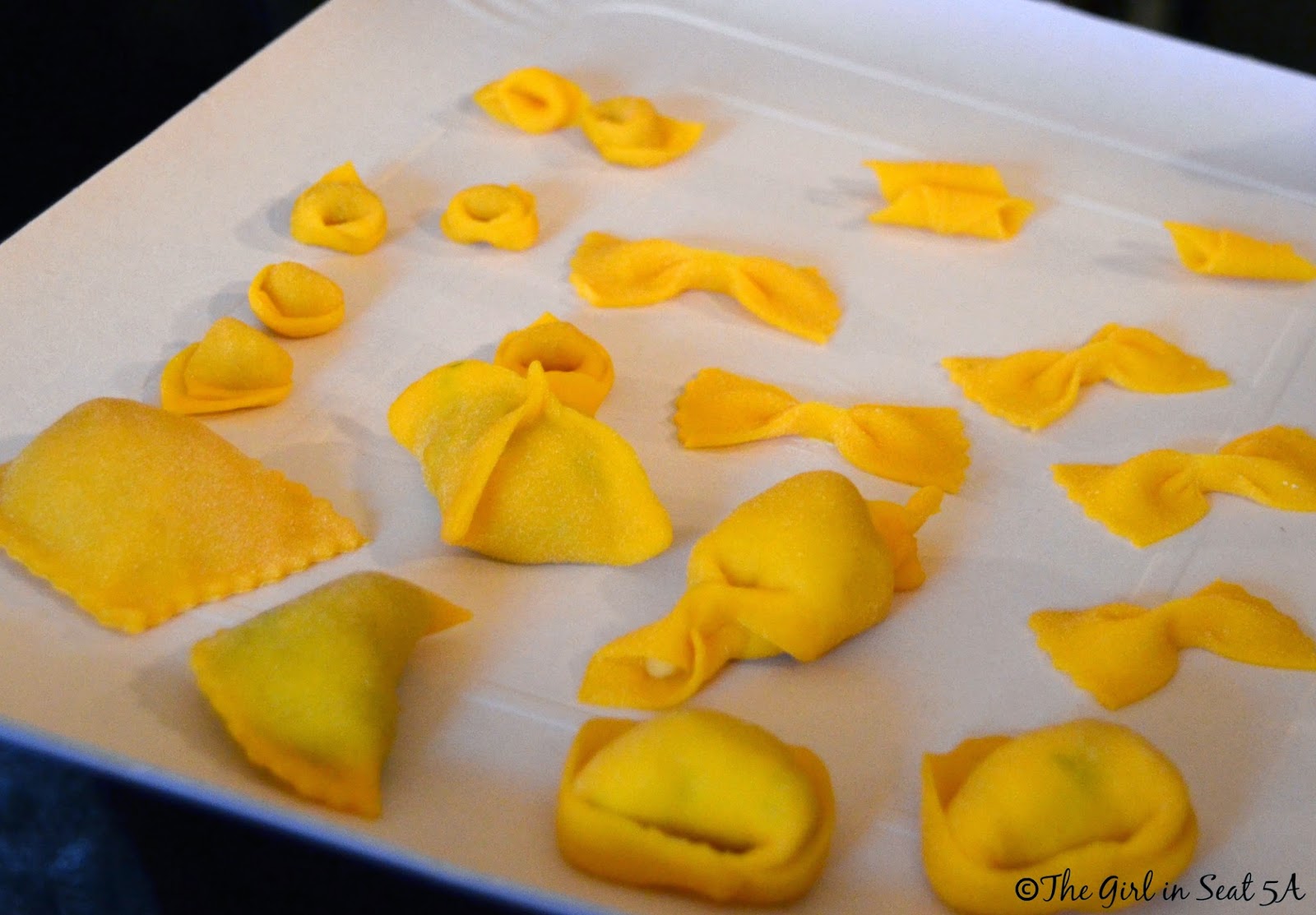 After the demonstration ended, we had a delicious lunch beginning with prosciutto and bruschetta: 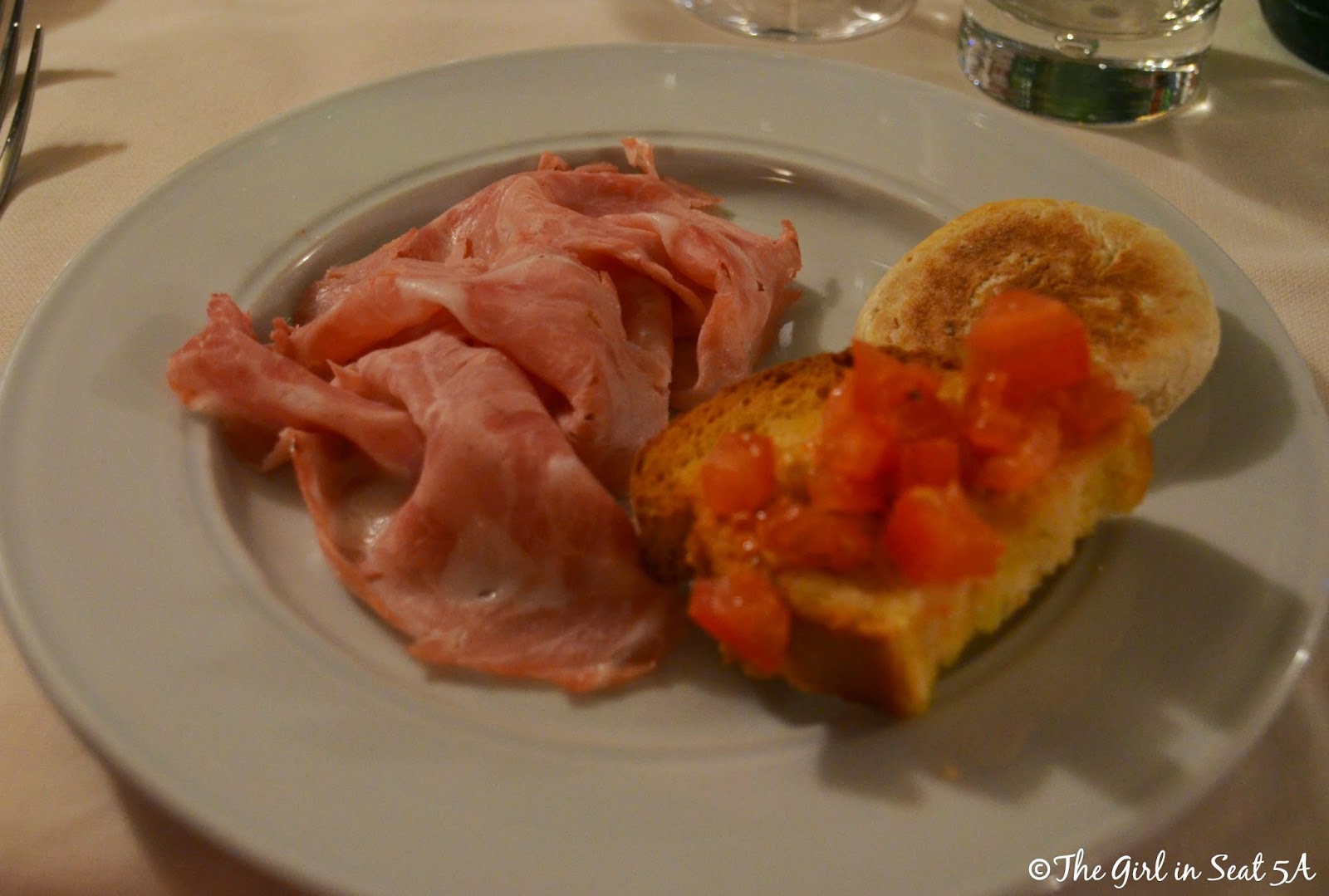 Followed by two different kinds of freshly made and mouth-watering pastas: 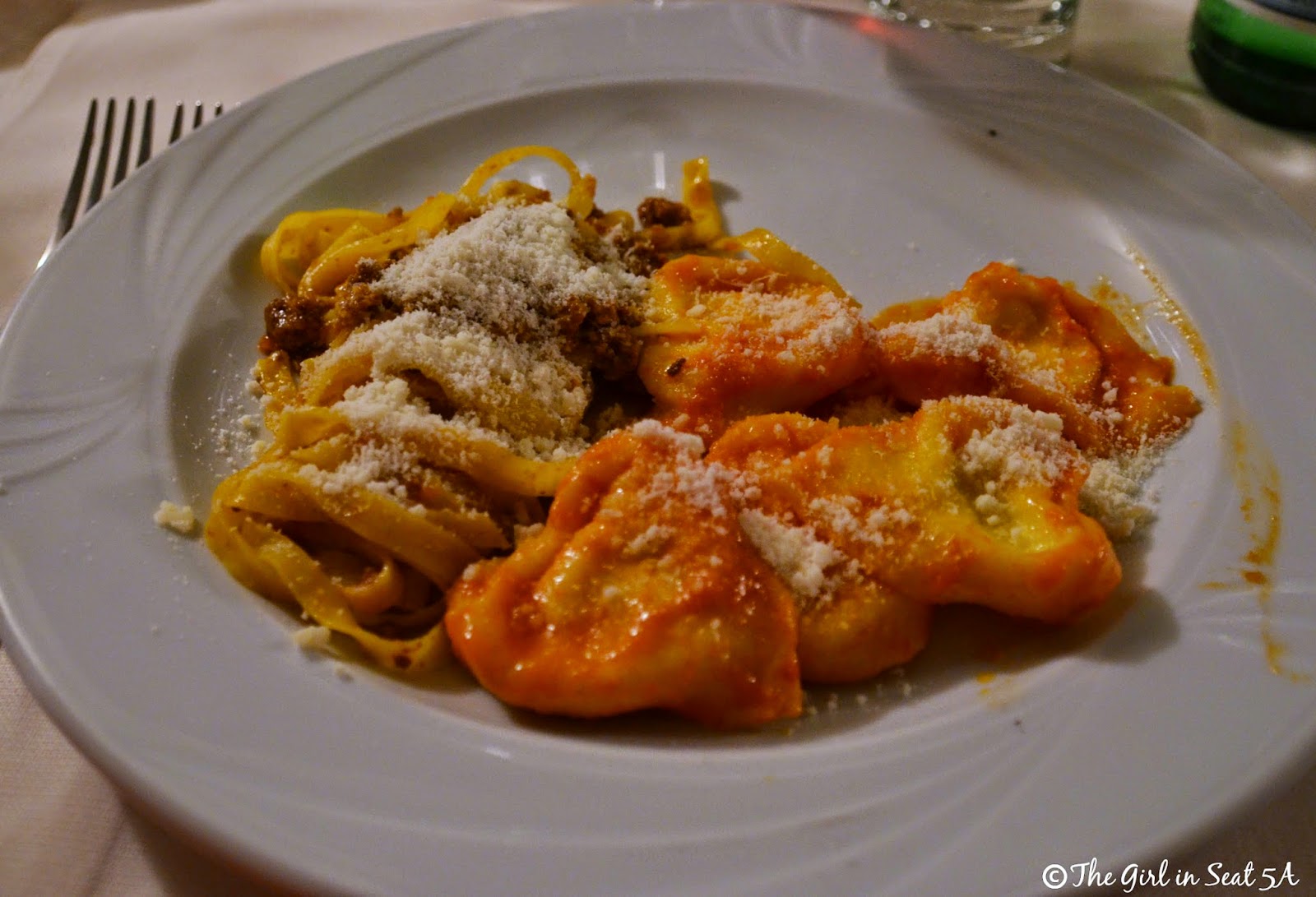 Our lunch was accompanied by a few bottles of an outstanding Sangiovese wine (the restaurant has over 500 wine options, and I doubt you could go wrong with any of them). They also have live jazz music every night…sadly we weren’t there at the right time to experience that. If you do go to Bologna, I would highly recommend this restaurant.

After lunch, our time in Bologna had come to an end, so we got back on the buses and headed back to the ship.

While I am glad that we visited both Padua and Bologna, they really weren’t places I wanted to spend too much time in. I’m sure that there other things to see and do in each city that I might have enjoyed, but they both just lacked something for me that would have made me want to stay longer (or go back for another visit).

My next post will be about our visits to Ravenna and Verona…and the good news is that I thoroughly enjoyed them both!

Have you been to Padua or Bologna? What did you think? Are there things I should have seen or done that would have changed my experiences for the better? Let me know in the comments below!

« Venice: The Good, The Bad and The Watery
Ravenna and Verona: You Had Me At Buongiorno »