In my first post about our Danube River cruise with Viking, I mentioned that we opted to do the pre-trip extension in Prague. We spent two full days and one evening in this beautiful city and enjoyed every minute of it. It’s definitely on my list of cities that I hope to return to someday.

This capital city of the Czech Republic is rife with history, a variety of stunning architectural styles, good food, great beer and friendly people. Running through the city is the beautiful Vltava river, which is spanned by over 30 bridges and foot bridges – the most famous being the Charles Bridge.

Evidence of occupation in the areas around modern day Prague dates back to approximately 5500 B.C., but it wasn’t until much later, in the 8th century A.D., that the first settlement was established in the Mala Strana (Lesser Town) area of Prague. The next century saw the establishment of a settlement on a hilltop above Mala Strana, leading to the construction of Prague Castle (pictured below), which was founded in 880 A.D. 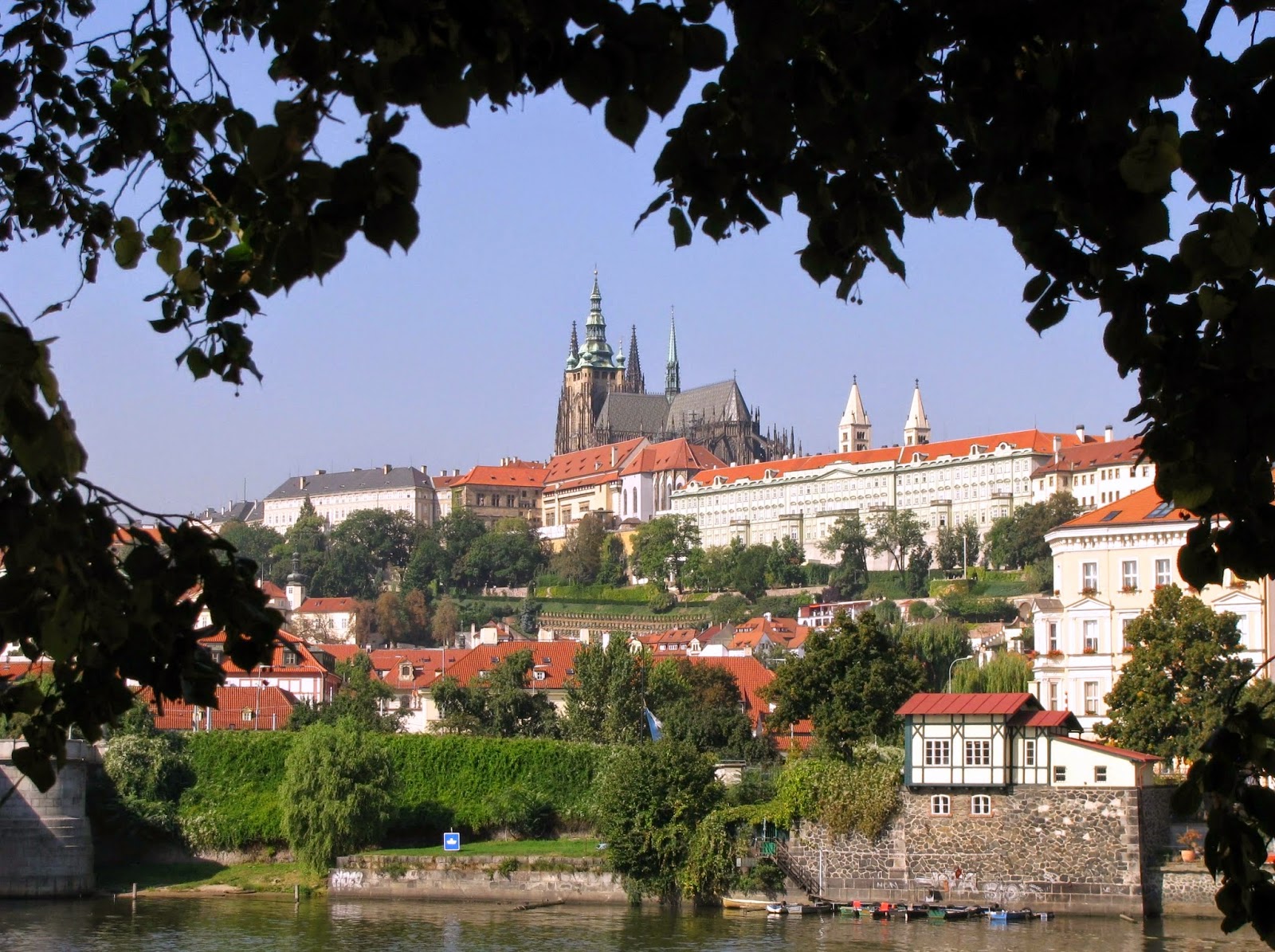 Our first full day in Prague, we had a guided tour with Viking. They took us by bus up to see Prague Castle and St. Vitus Cathedral. A grand and imposing Gothic structure, construction began on St. Vitus in 1344 and wasn’t finished until 1929.  Impressive as it is on the outside, we were extremely disappointed that we were unable to go inside due to some sort of event that had it closed to the public during the time we were there. 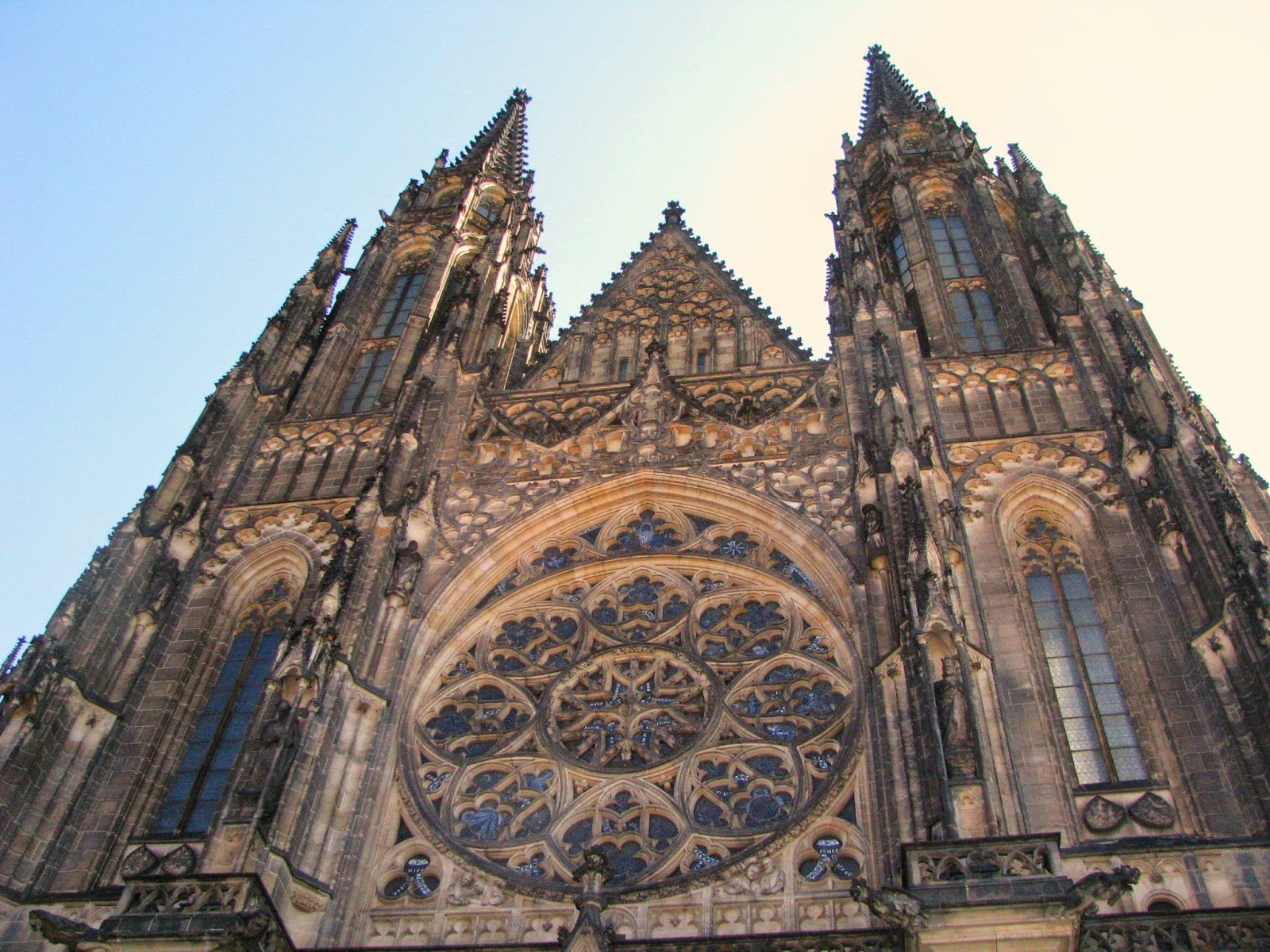 We also toured the gardens of Prague Castle, which were very pretty and worth taking a stroll through, if you have the time. 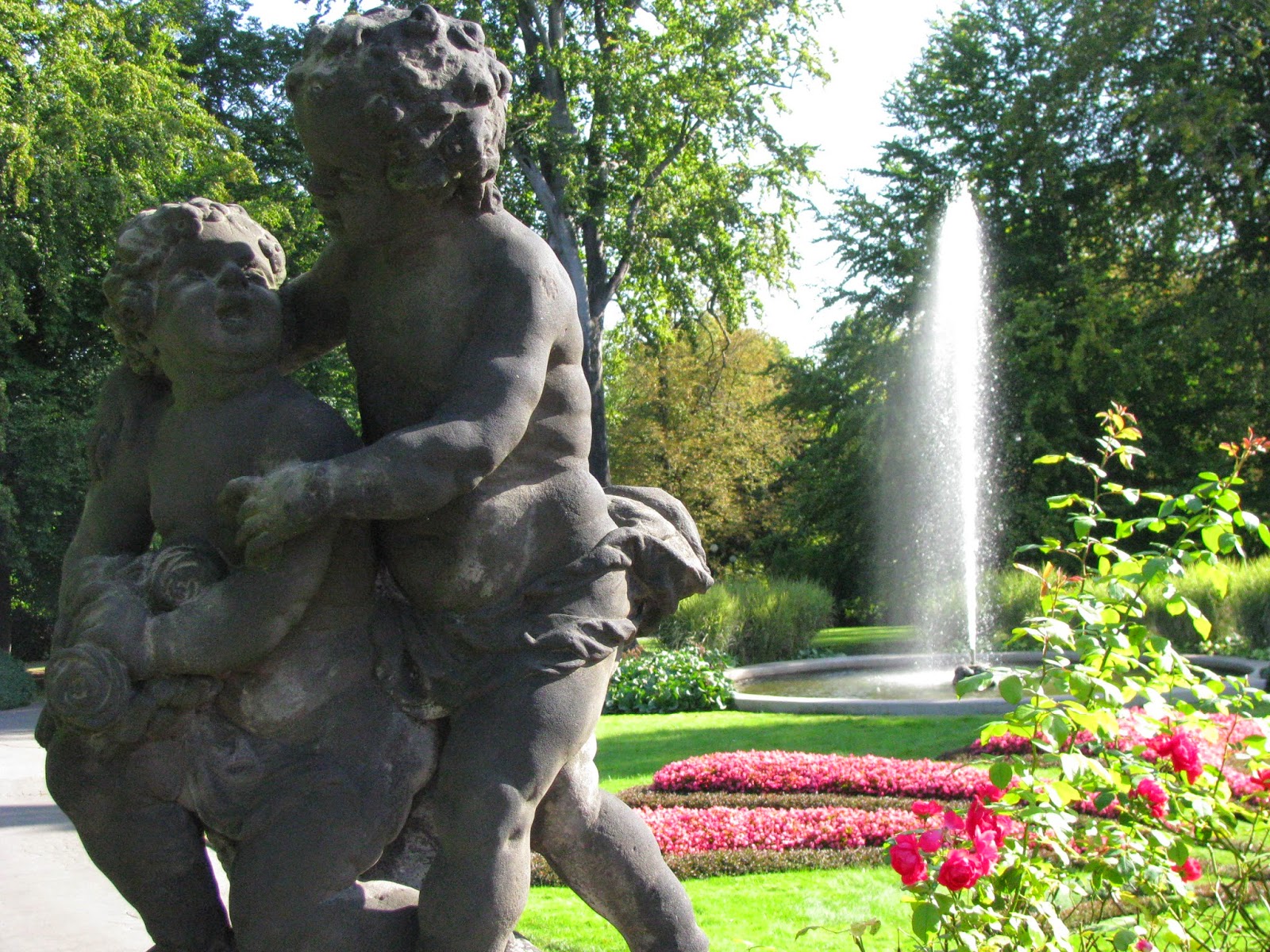 After that, we were taken back to the Old Town (Staré Město) area and had the rest of the day on our own. 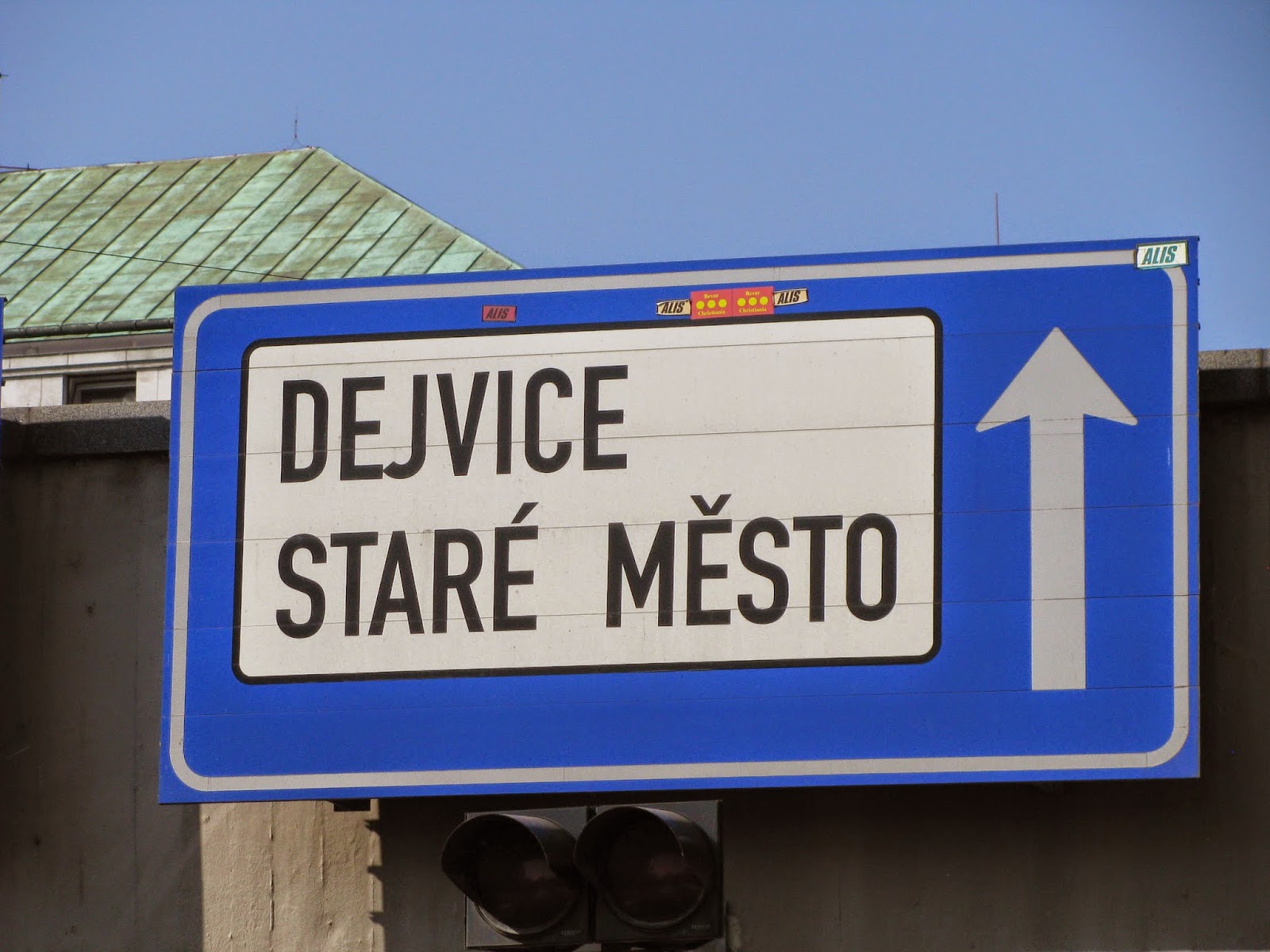 We walked to the Old Town Square, which began as the central marketplace for the city back in the 12th century. Today, you will still find vendors selling different food, drinks and other items. 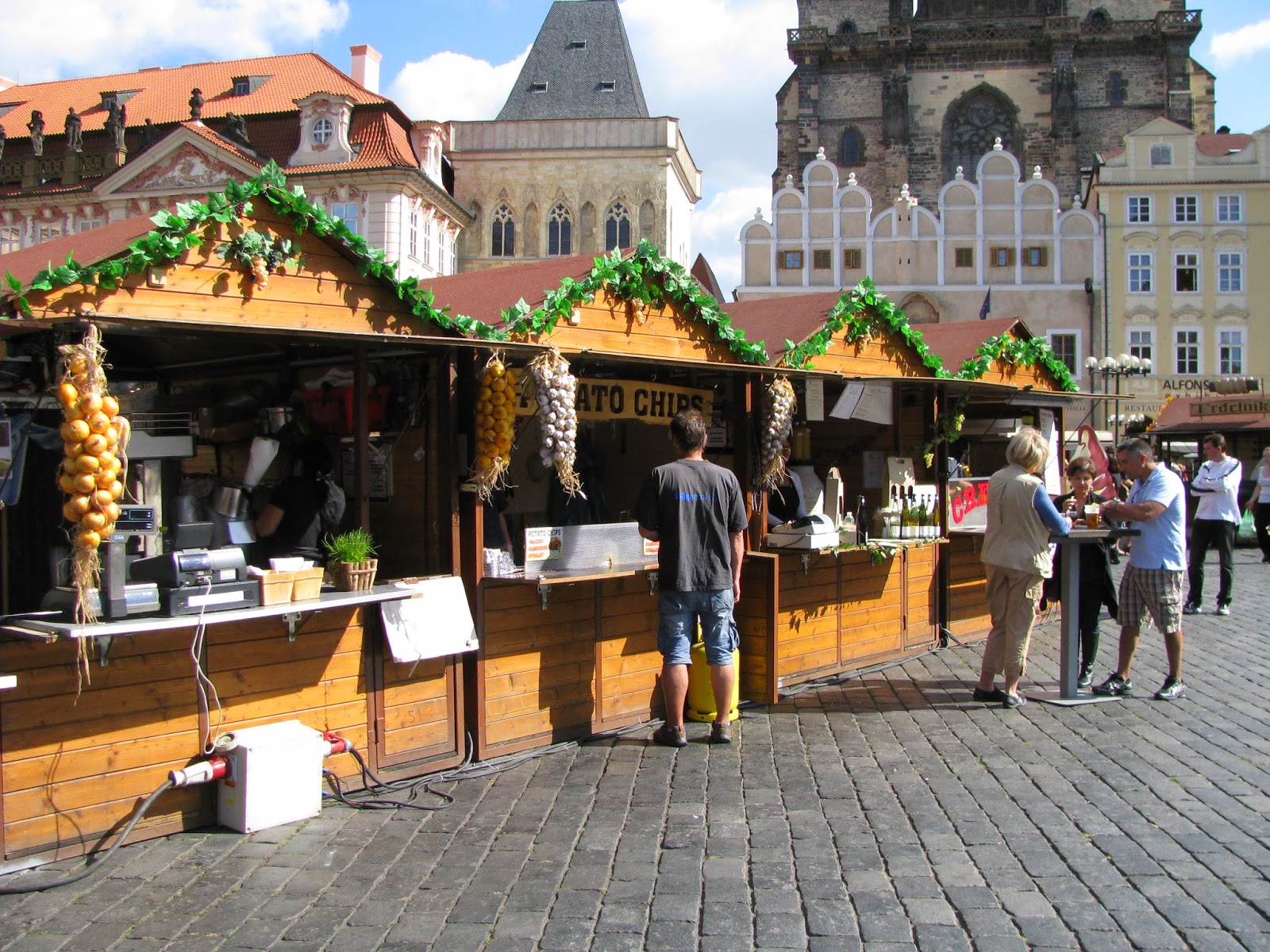 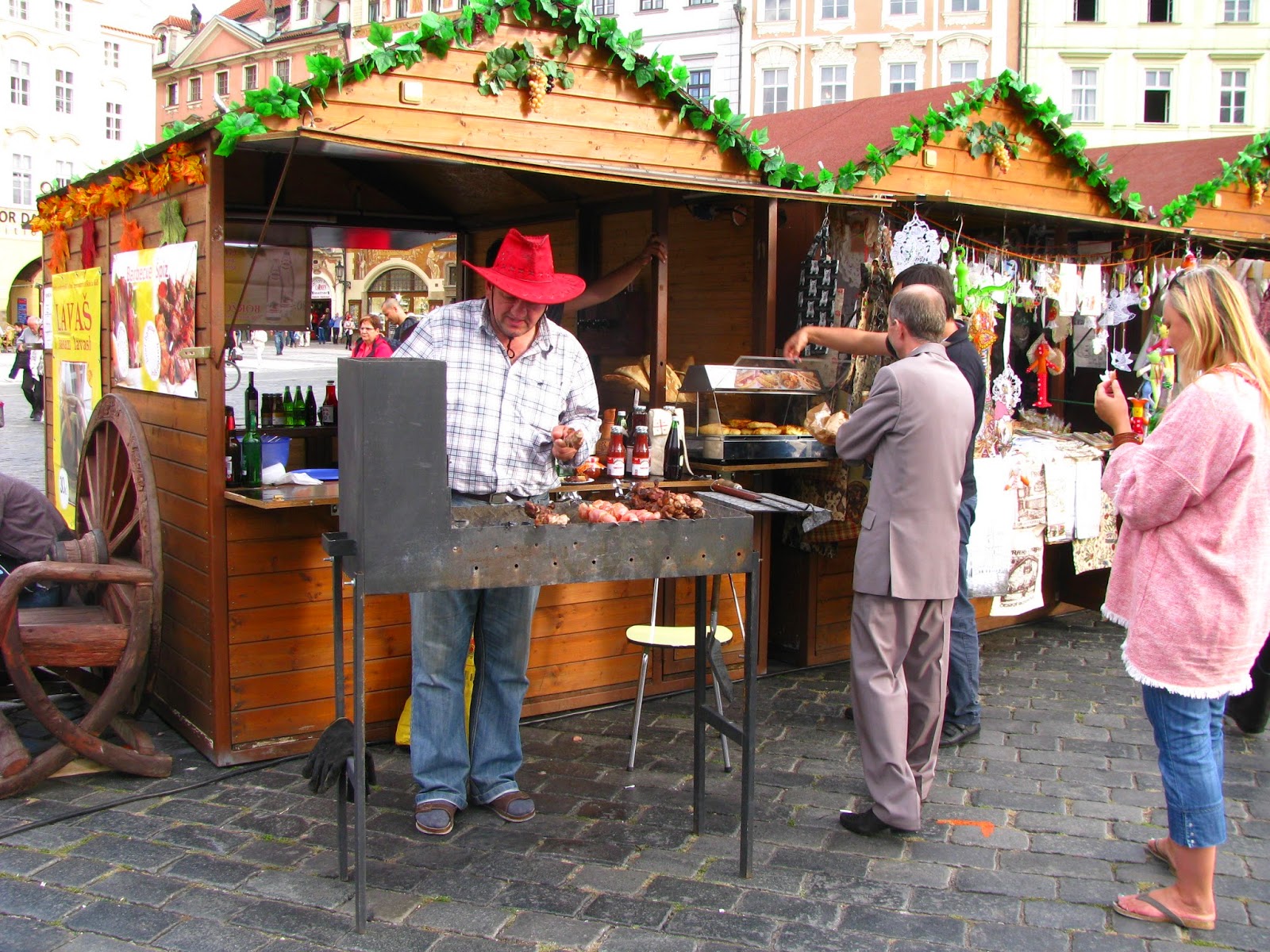 This was my favorite place in the city. It was excellent for getting a quick bite to eat, or just to relax and people-watch.  Several notable sites like the astronomical clock, Tyn Church and St. Nicholas Church are all right off the square and there is plenty of shopping to be done around this area as well.

Dating back to the 15th century, the astronomical clock is amazing. We joined the huge crowd that gathers every hour to watch as the clock comes to life and the procession of the 12 apostles begins. 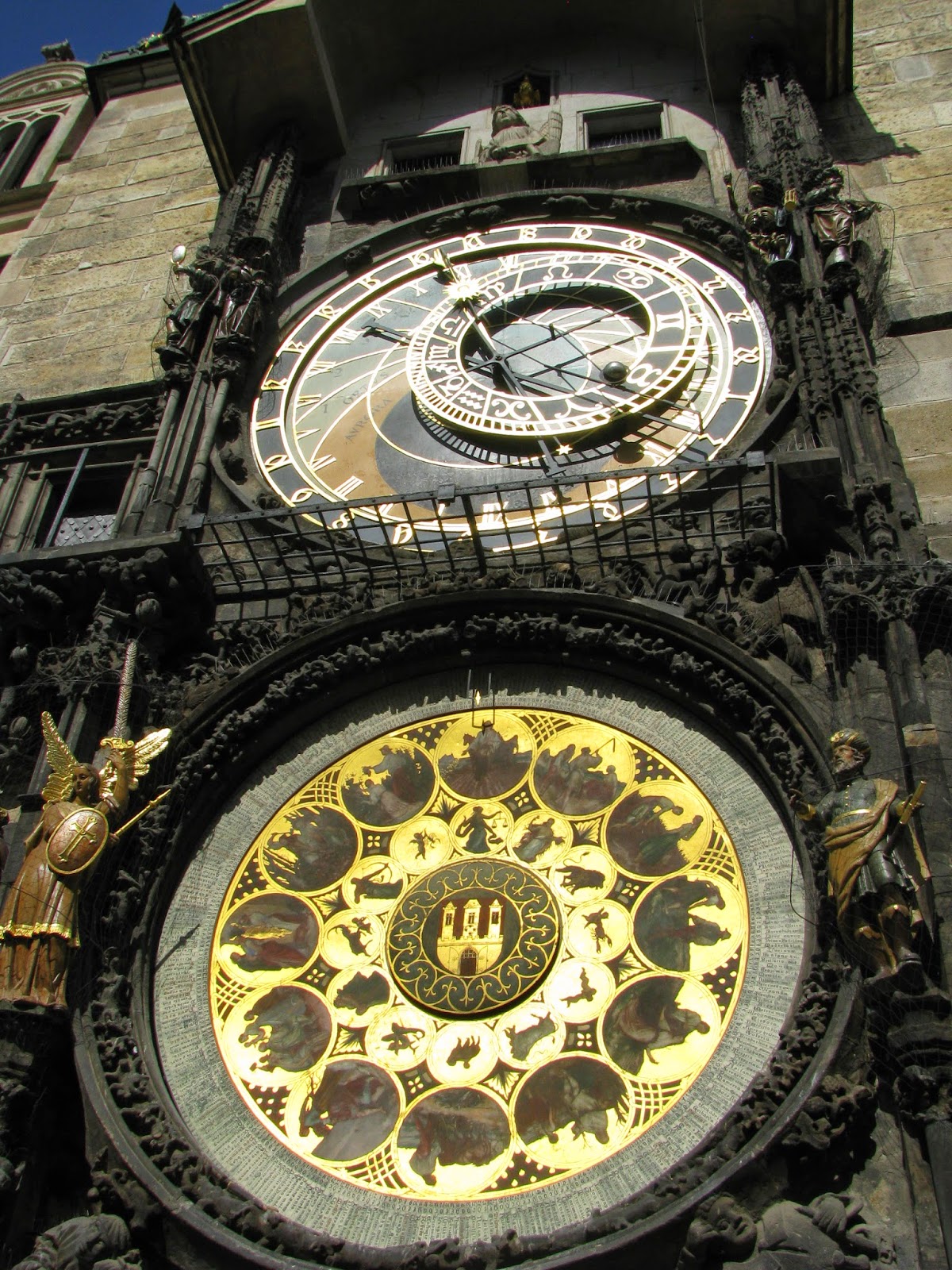 Within the clock face, there is another circle that has all the signs of the zodiac, which was added in 1865. Can you spot the skeleton of death as he tolls the bell in the upper right corner? 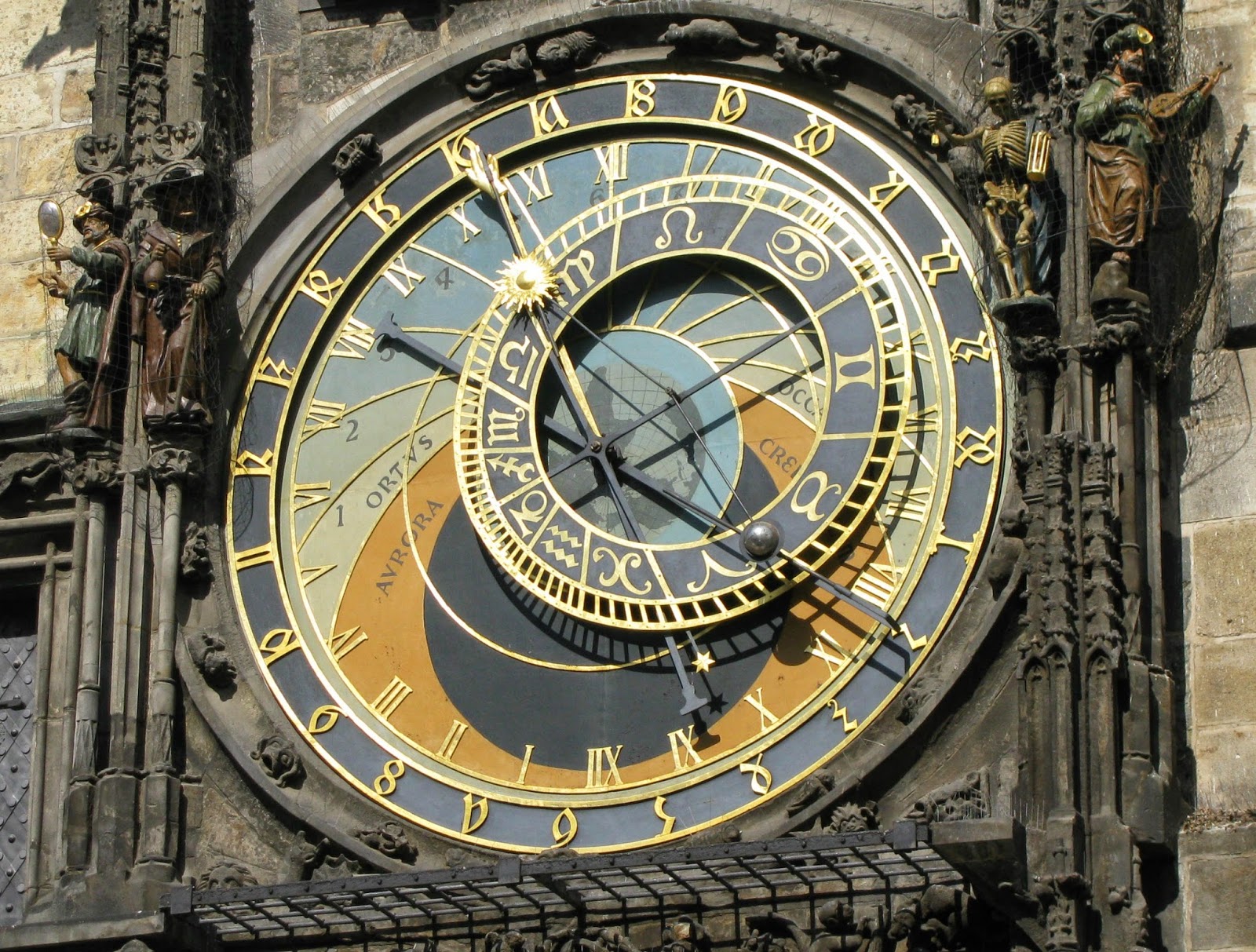 The building that the clock is part of is the Old Town Hall Tower. Don’t miss the chance to go up the tower for breathtaking views of the city and the square below. If you are so inclined, you can climb the stairs – otherwise, there is an elevator that speeds you to the top (guess which one I opted for?). No matter how you get up there, it’s a must do! 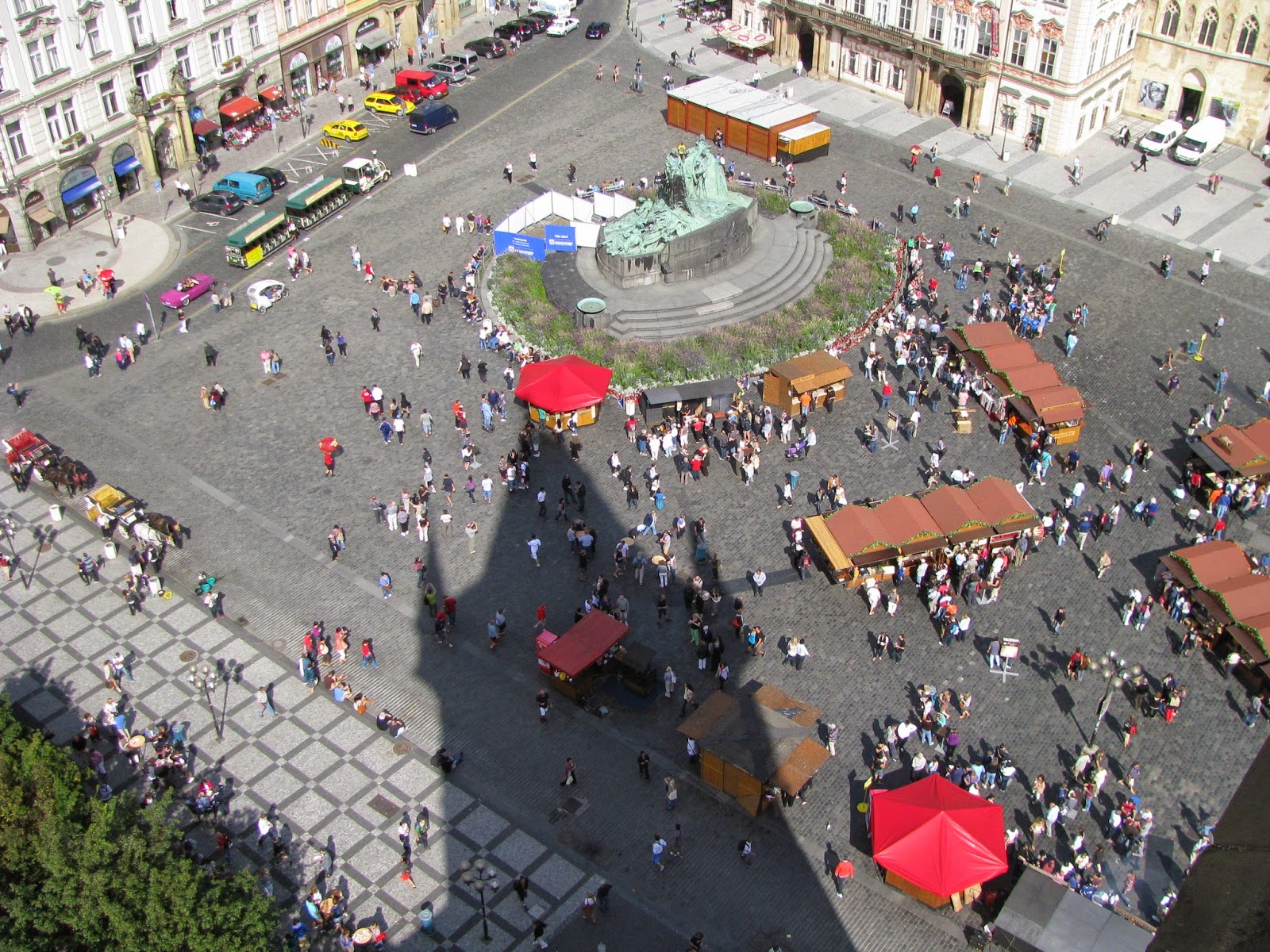 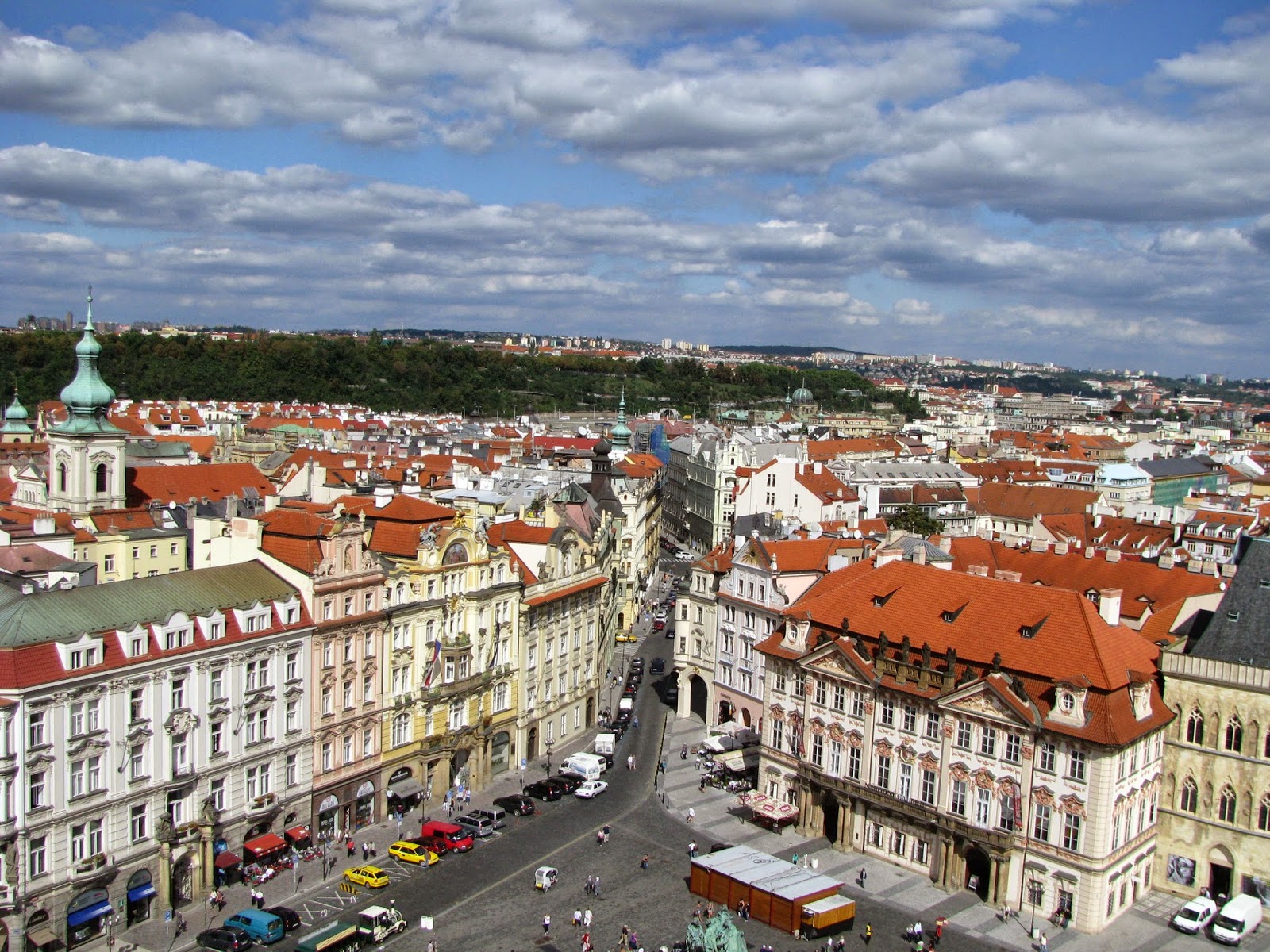 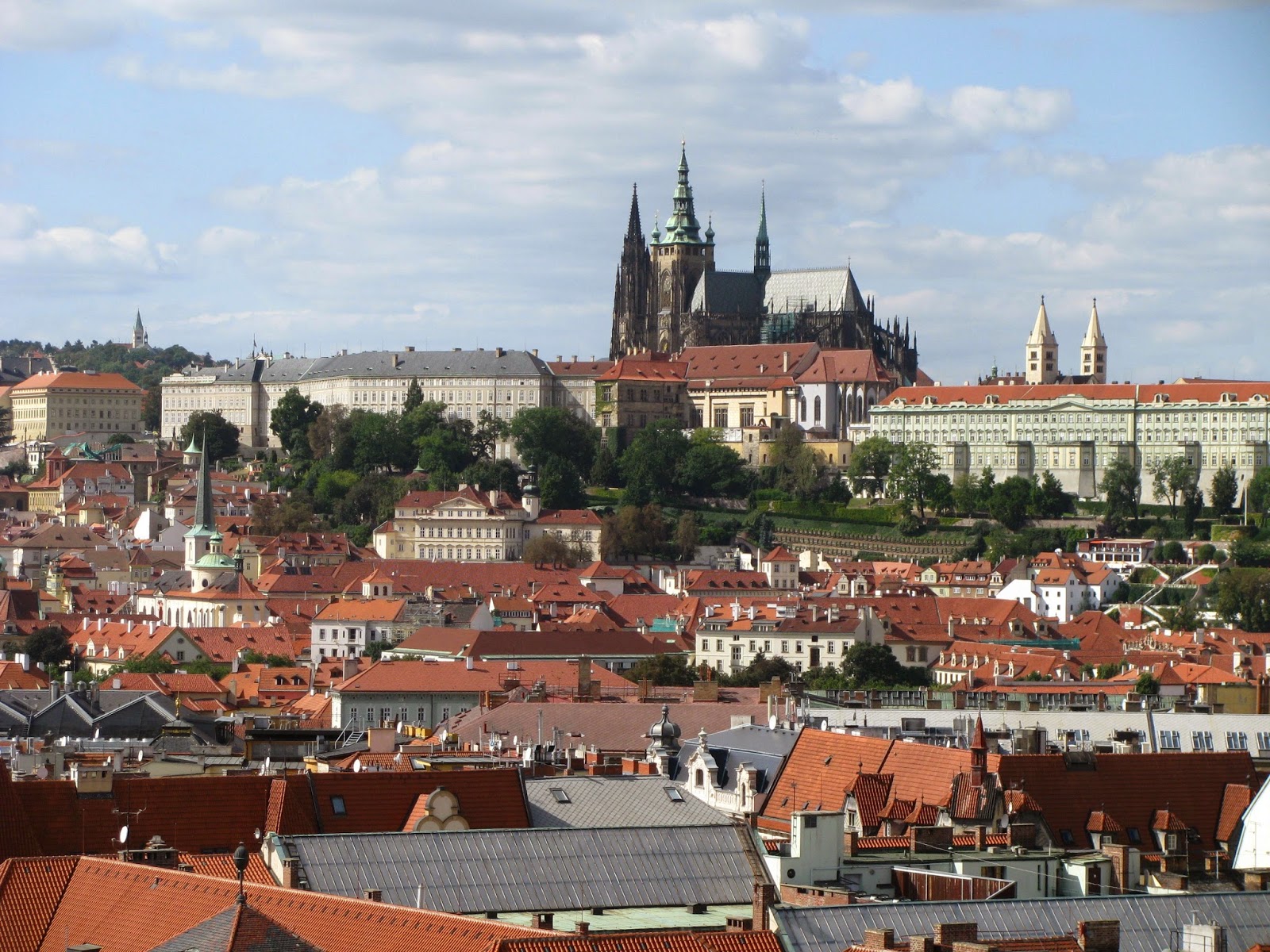 Founded in 1385, Tyn Chuch (also known as the Church of Our Lady Before Tyn…I kept thinking people were saying “Time” instead of “Tyn”) is another beautiful structure right off the Old Town Square. Its twin spires can be seen from all around the city. 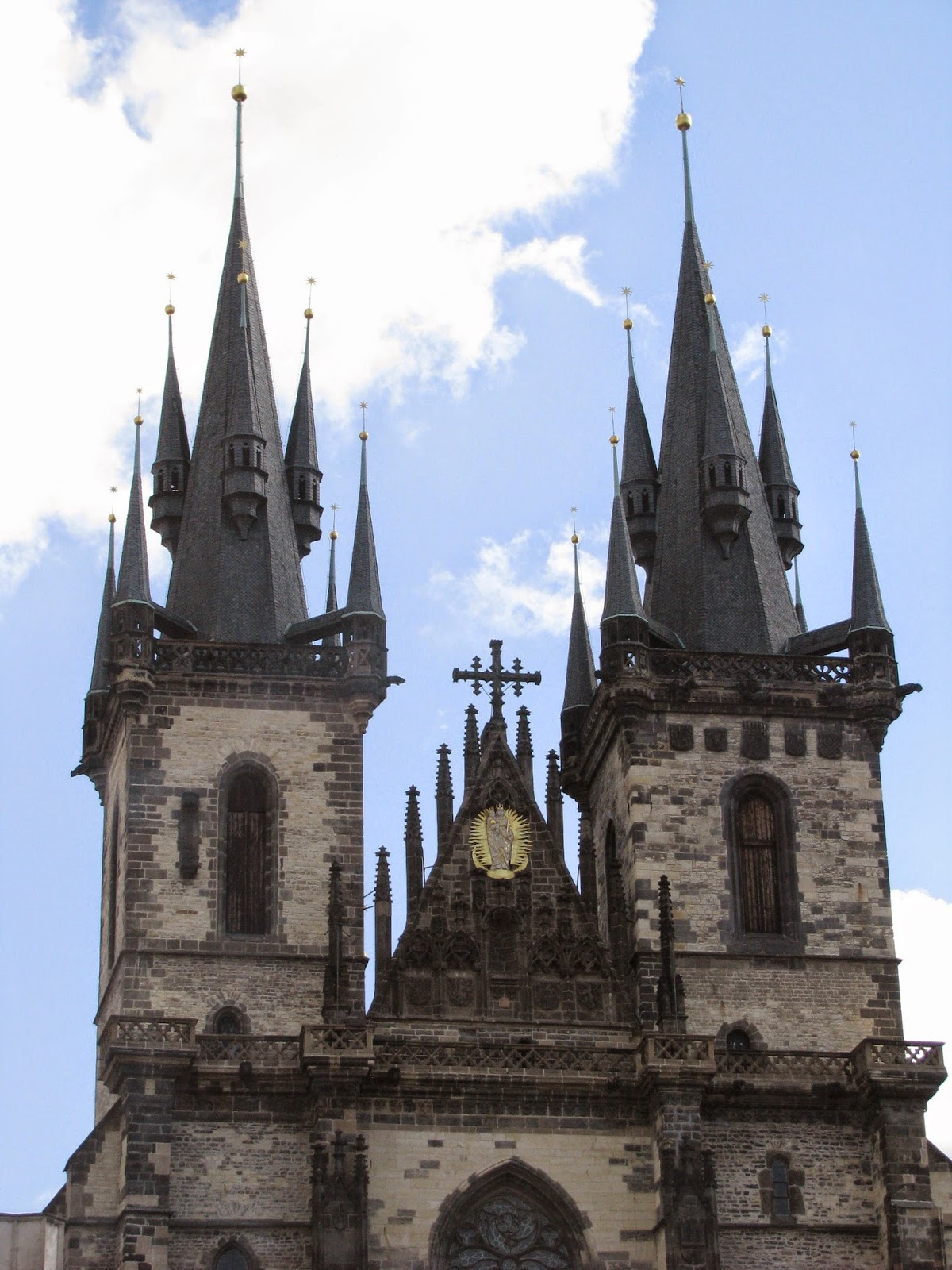 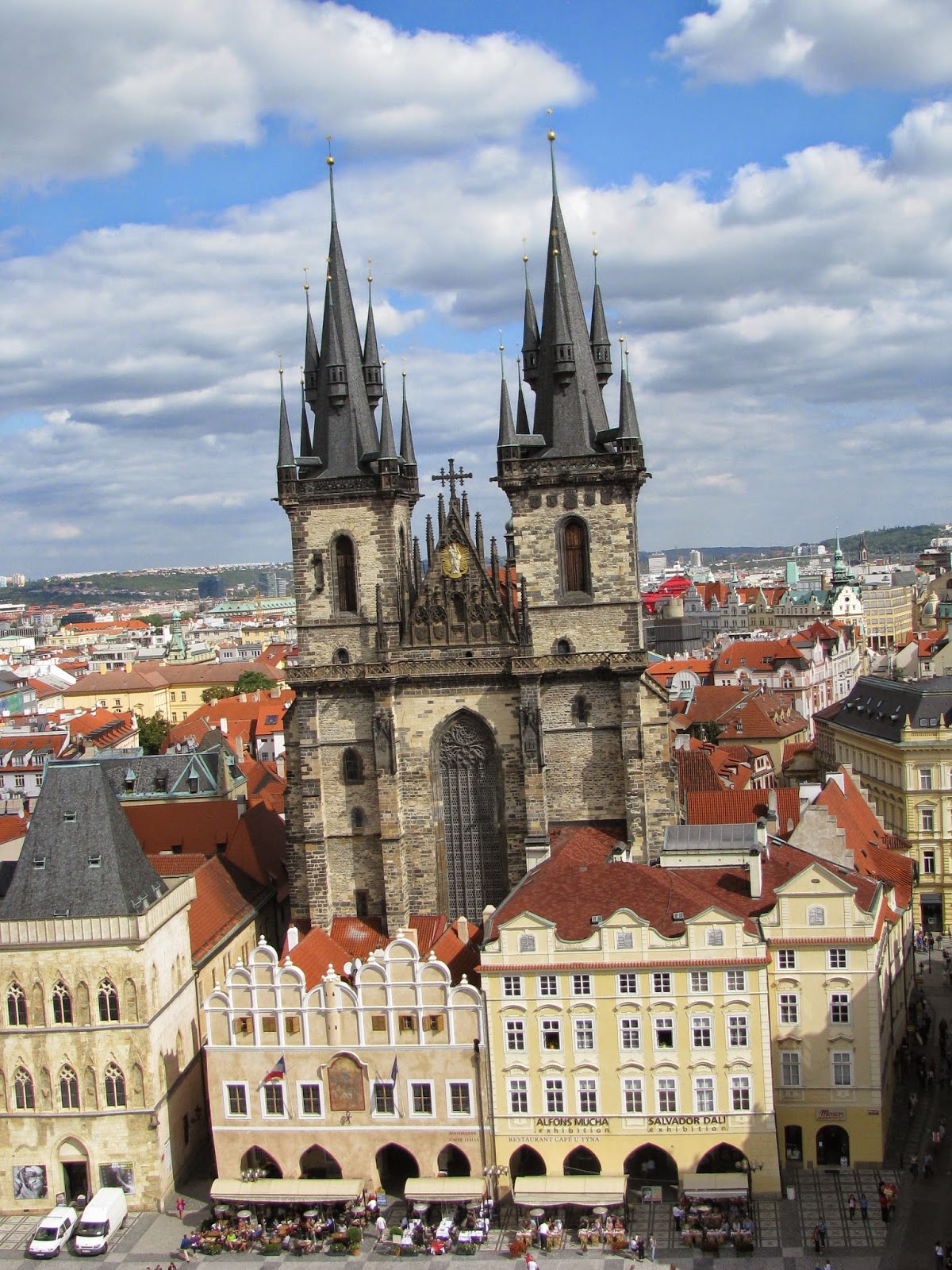 Another must see in Prague is the Charles Bridge. Commissioned in the 14th century by King Charles IV, this stone bridge is the main pedestrian route that connects the Old Town with the Lesser Town (an area that is also worth exploring). The Bridge is filled with street artists and musicians, and, of course, plenty of tourists. 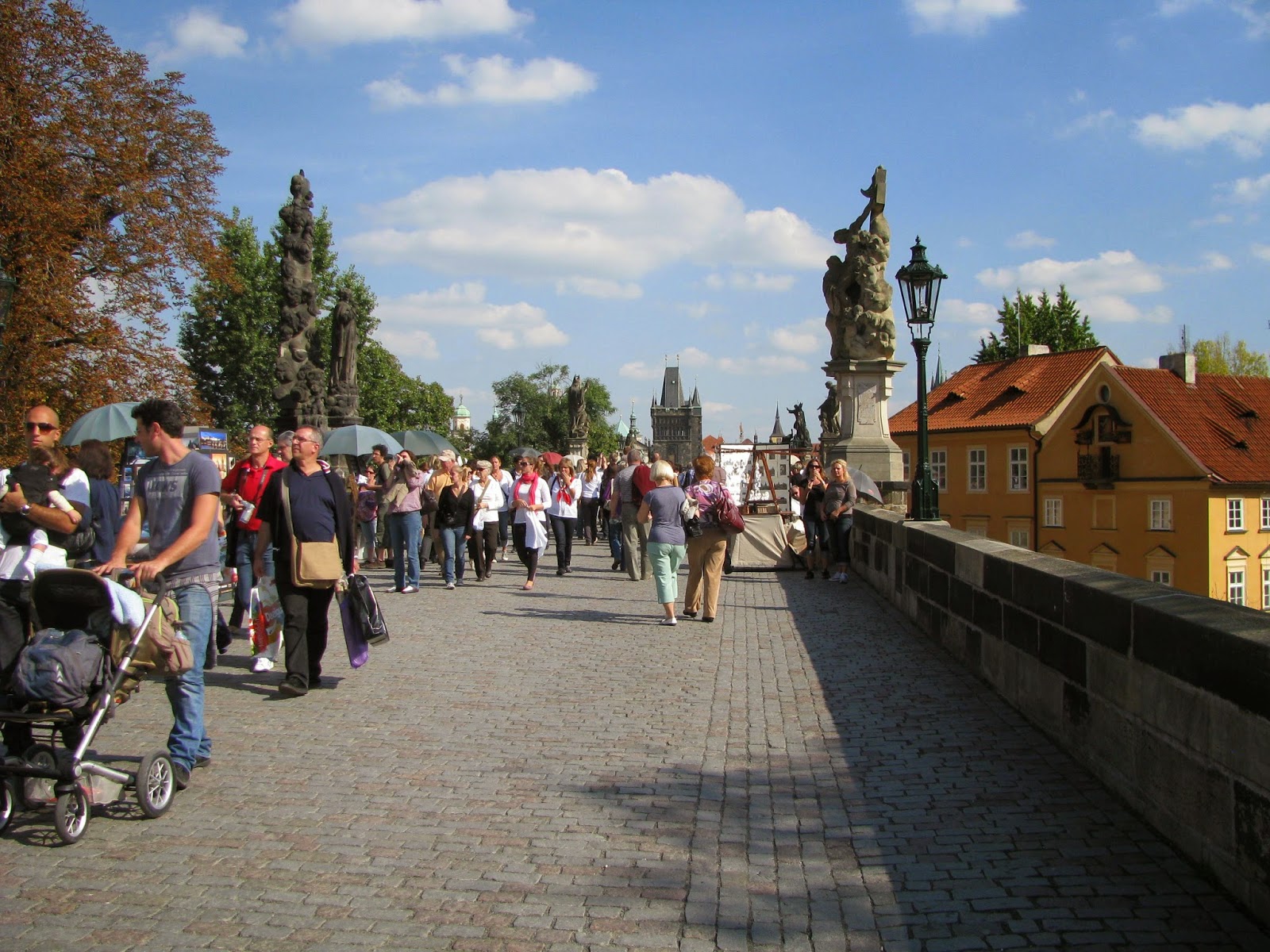 Walking along the bridge, you will have gorgeous views of the Vltava River. Take the time to notice the statues (about 75 of them) set along both sides of the bridge. Most of these statues are reproductions, as the originals have been lost to time and weather-related erosion. 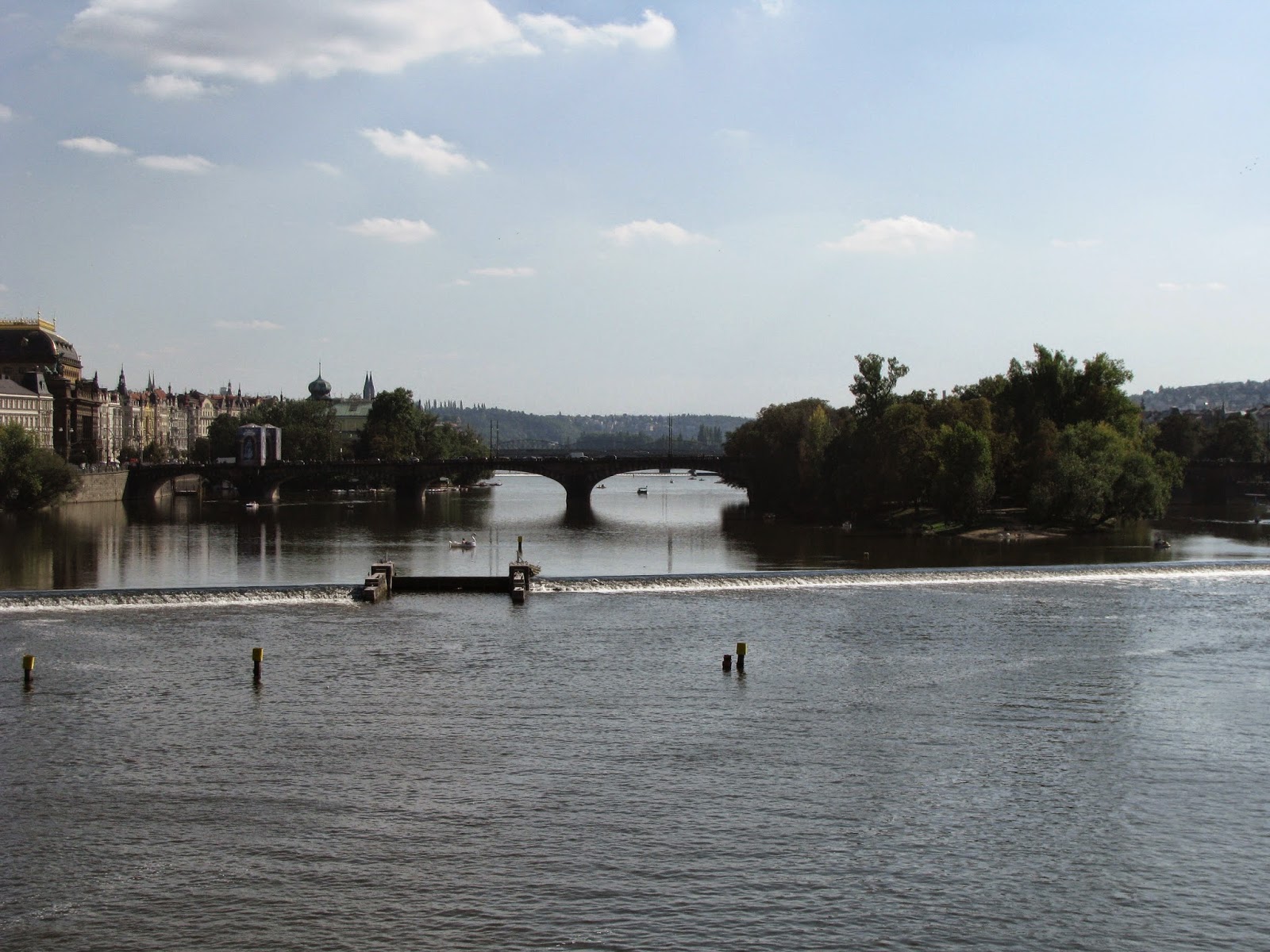 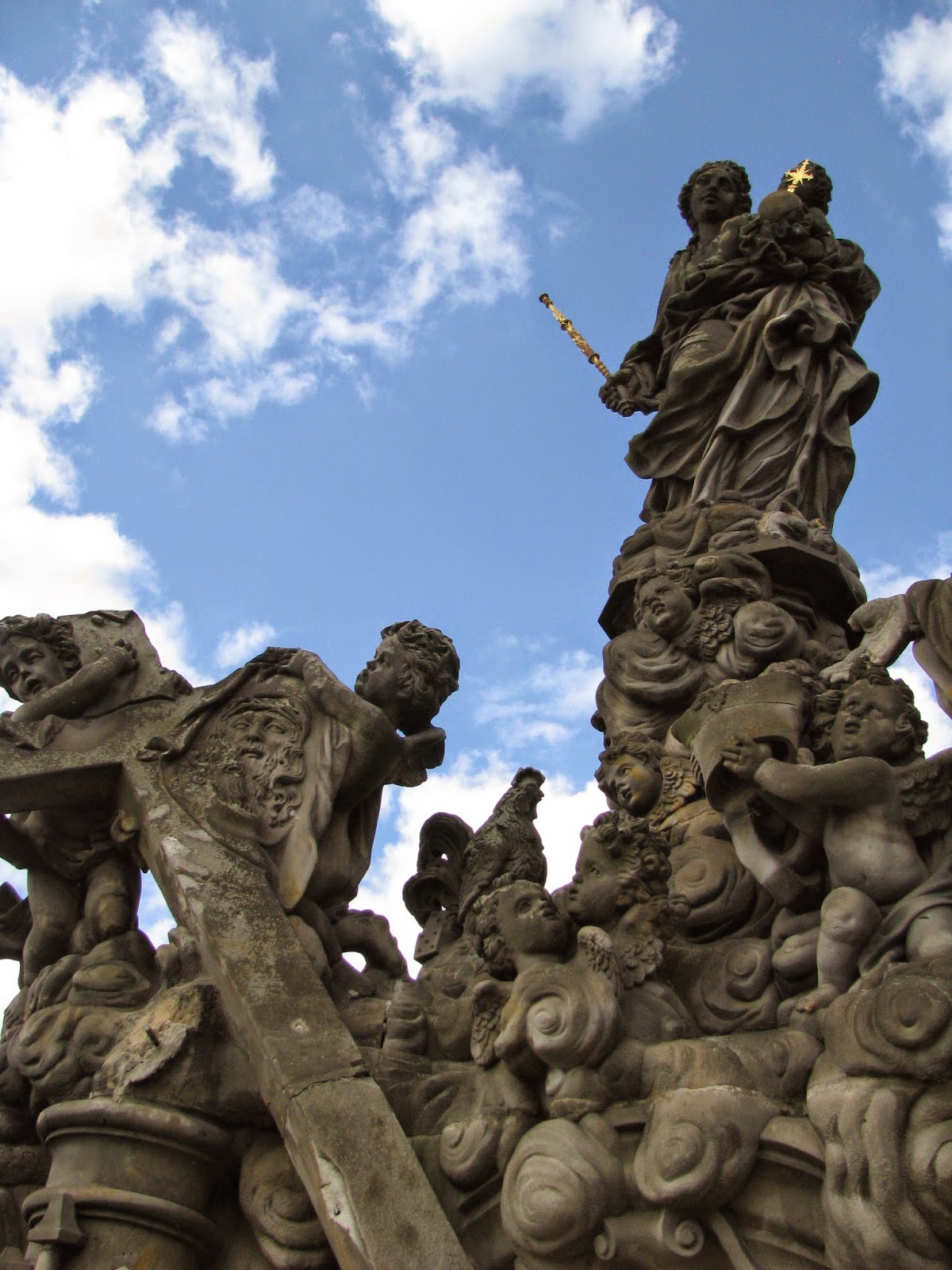 We also visited Wenceslas Square, which is a sprawling, bustling area surrounded by shops, apartments, hotels, restaurants and clubs. We honestly didn’t spend much time here because it was just too crowded for us to enjoy toward the end of a long day. 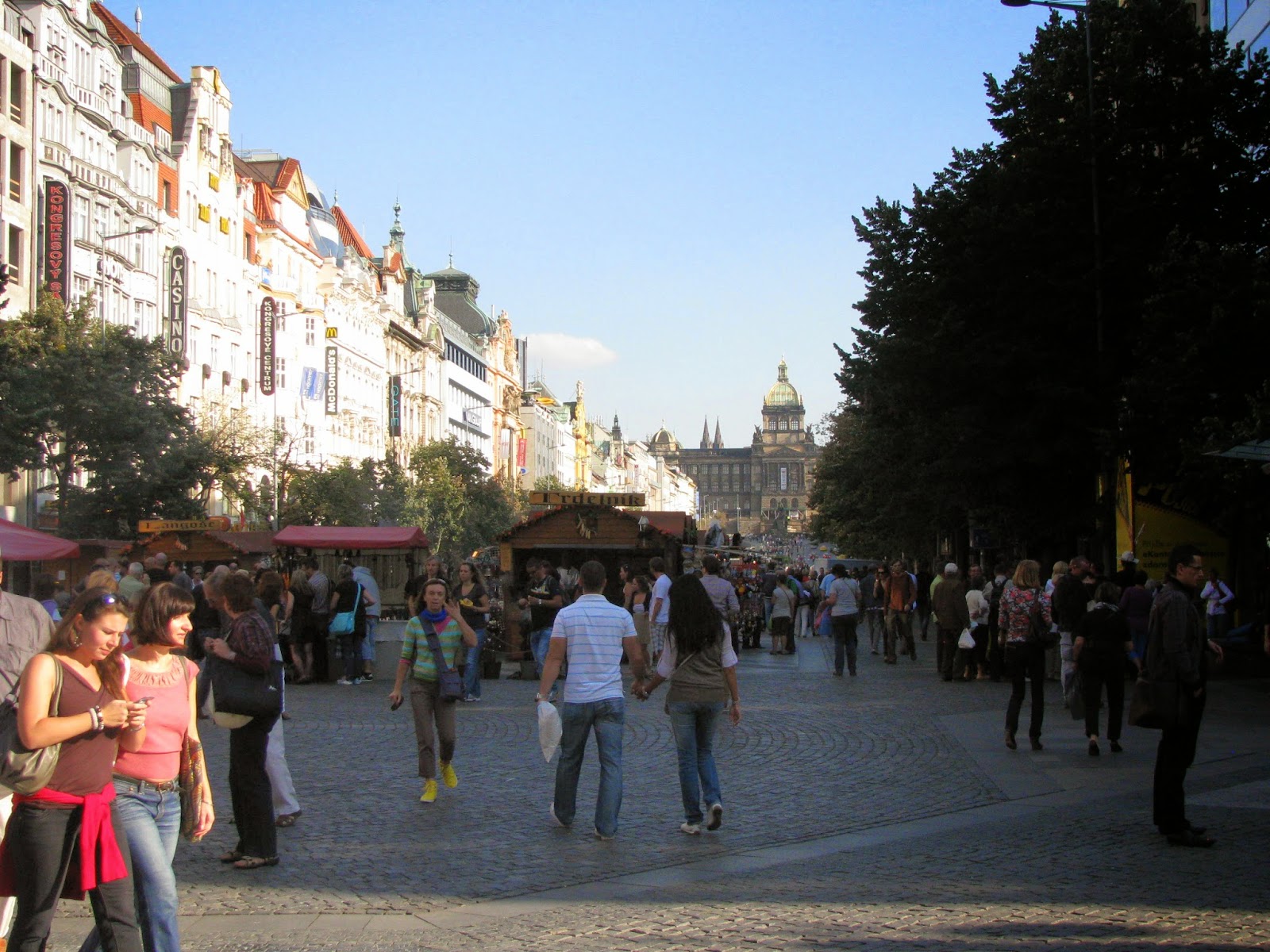 You are probably stunned that I have gotten this far in my post without mentioning food. But don’t worry…the time has come! One thing that I was really looking forward to having in Prague is schnitzel. I did some research on restaurants that got good reviews for it, and found U Glaubicu, which has been open since 1665. The restaurant is located in Lesser Town near (the other) St. Nicholas church. We sat outside and all three of us ordered the schnitzel, which came in huge portions and was absolutely delicious. Service was a bit slow, but friendly. 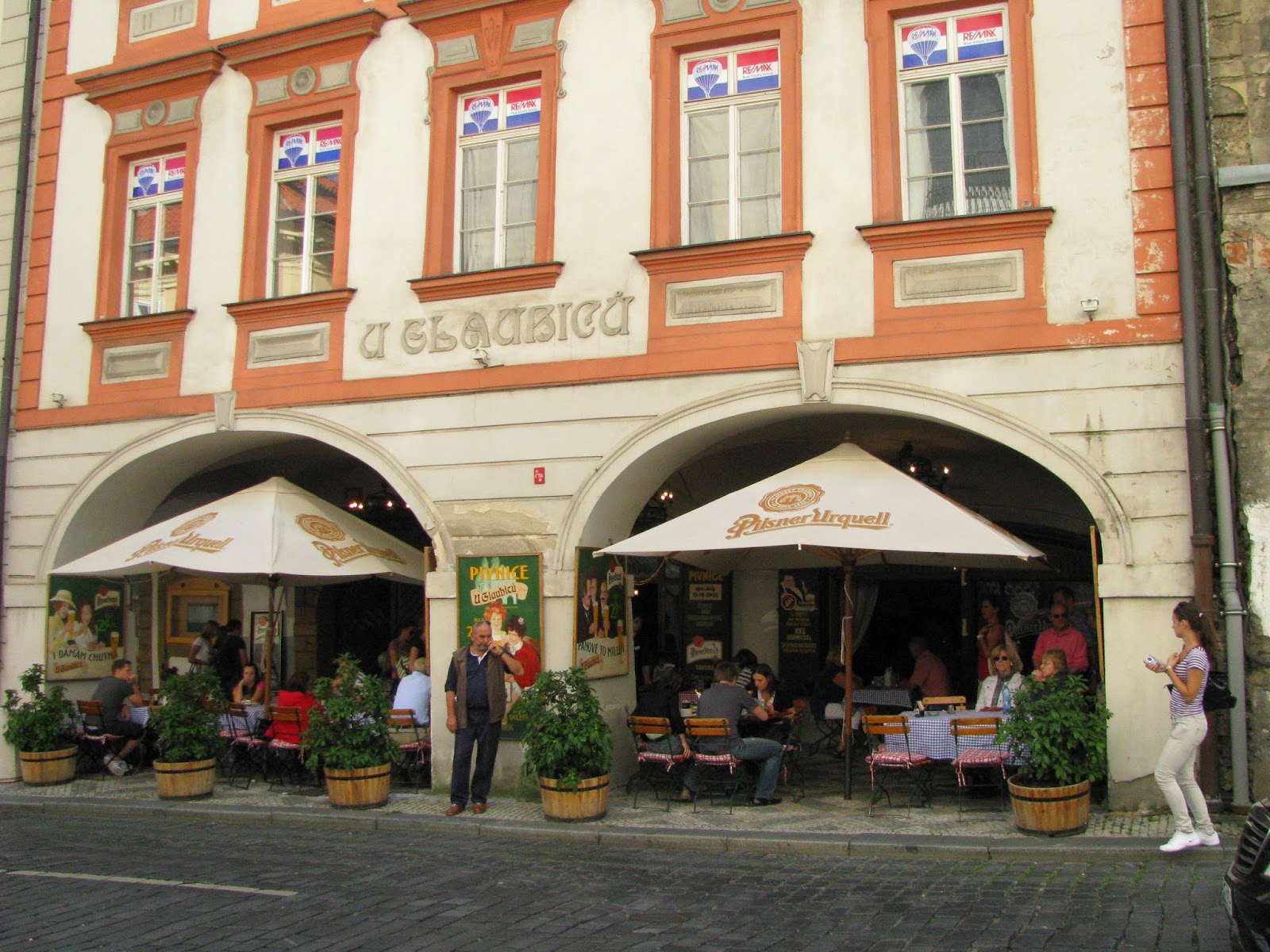 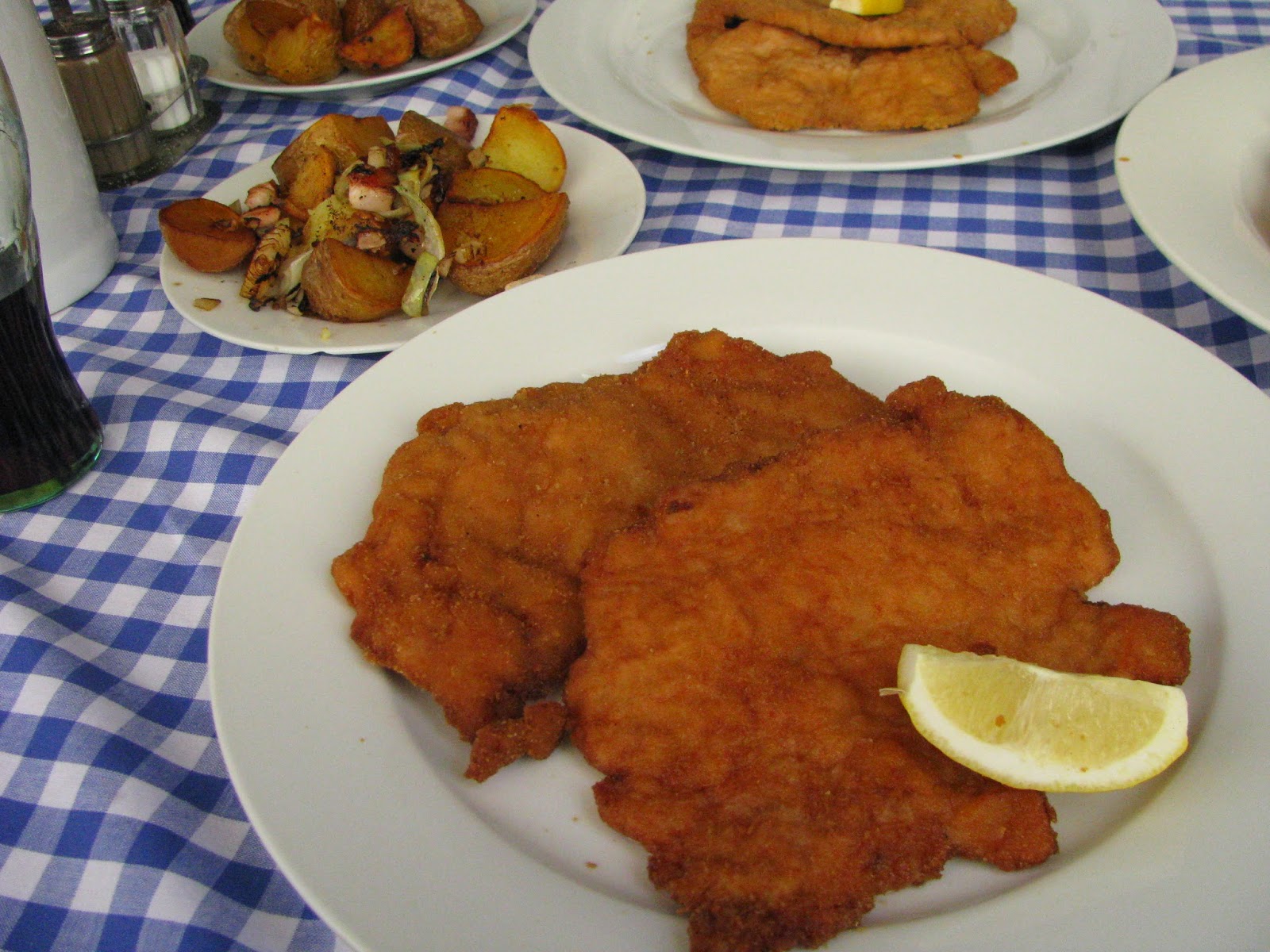 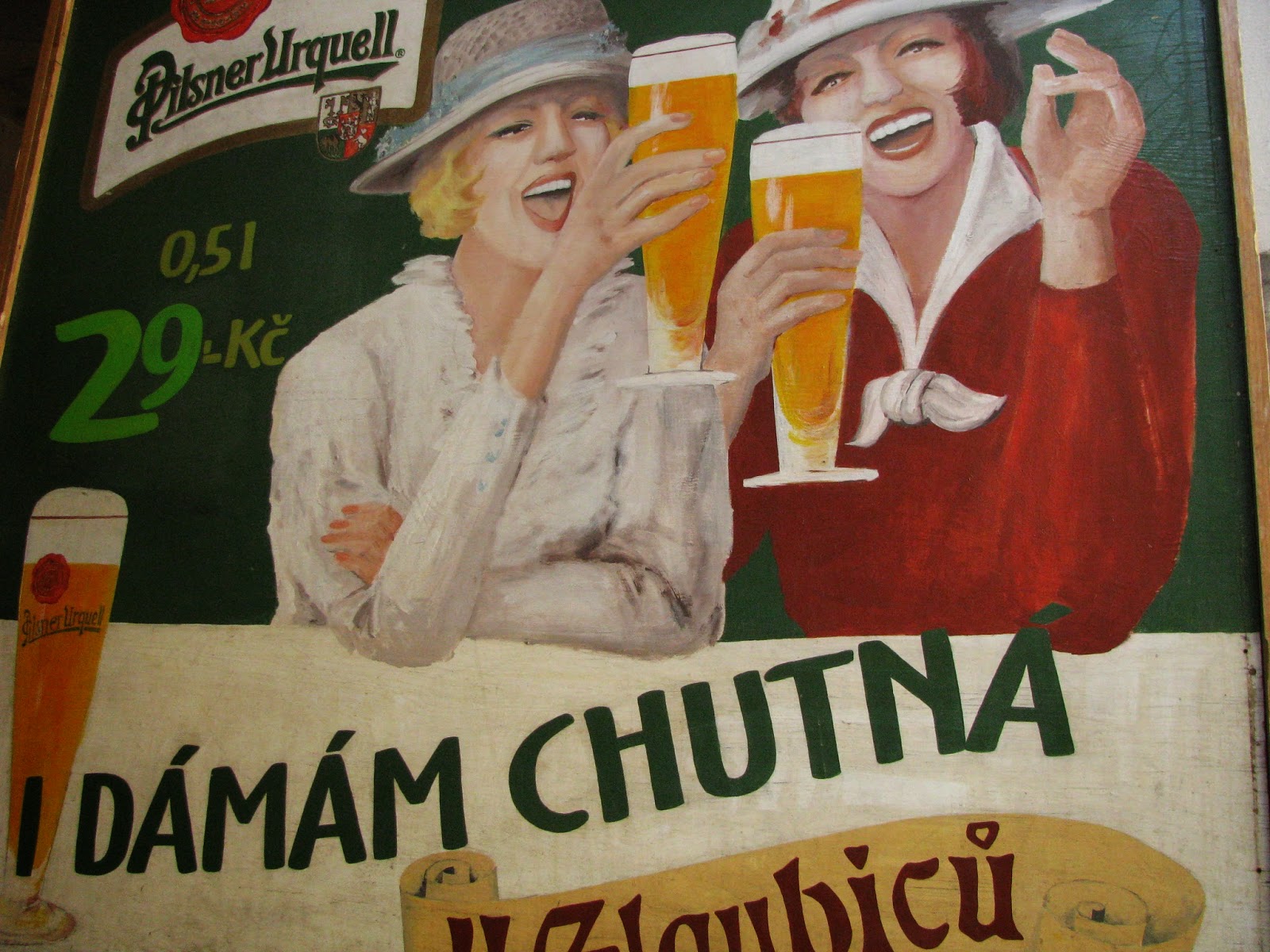 One other thing I want to talk about is the hotel we stayed at, which was the Hilton Prague. The hotel was perfect in every aspect other than its location, which was quite a long walk from city center. This wasn’t so bad when starting out in the morning, but after a long day of walking, it was a bit too far away for our preference.

We stayed on the Executive Level, which had its own check-in area as well as a lounge that offered snacks, light meals and drinks throughout the day. Everything we had there was very good and the service was excellent. The two days we spent in Prague, we ate lunch while we were out and about during the day, and would then have “dinner” in the lounge at night. 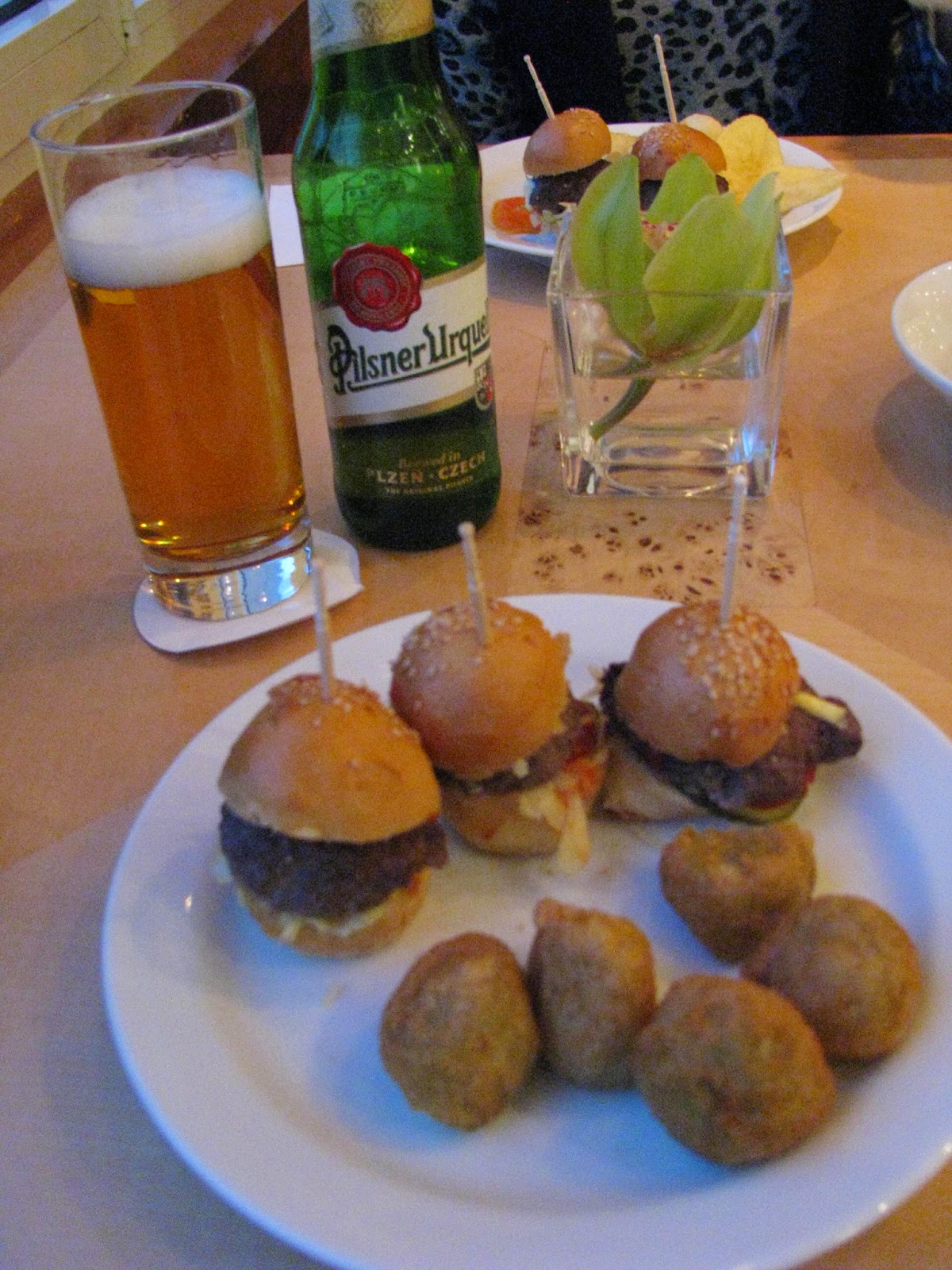 The rooms were spacious, comfortable and clean…standard for what you will find in most Hiltons. The perks that come with staying on the Executive Level, however, are well worth the upcharge. There’s a small casino on the lower level of the hotel, where we spent some of our time losing money. On the top level of the hotel, you will find Cloud 9 Sky Bar & Lounge, which offers food, drinks and panoramic views of the city.

Two days was definitely not enough time to spend in Prague. It’s a very walkable city, offering many things to do and experience. Even though we saw a lot, there was still so much more that we didn’t see. I definitely hope to go back someday!