The other two places we visited during on our Venice and Po River cruise were Ravenna and Verona – and I adored both of them. Day trips are likely enough to cover the highlights, but I would have enjoyed spending more time in each city just wandering around. Their charm and welcoming vibes were a wonderful reminder of why I love Italy so much.
Let’s start with Ravenna! 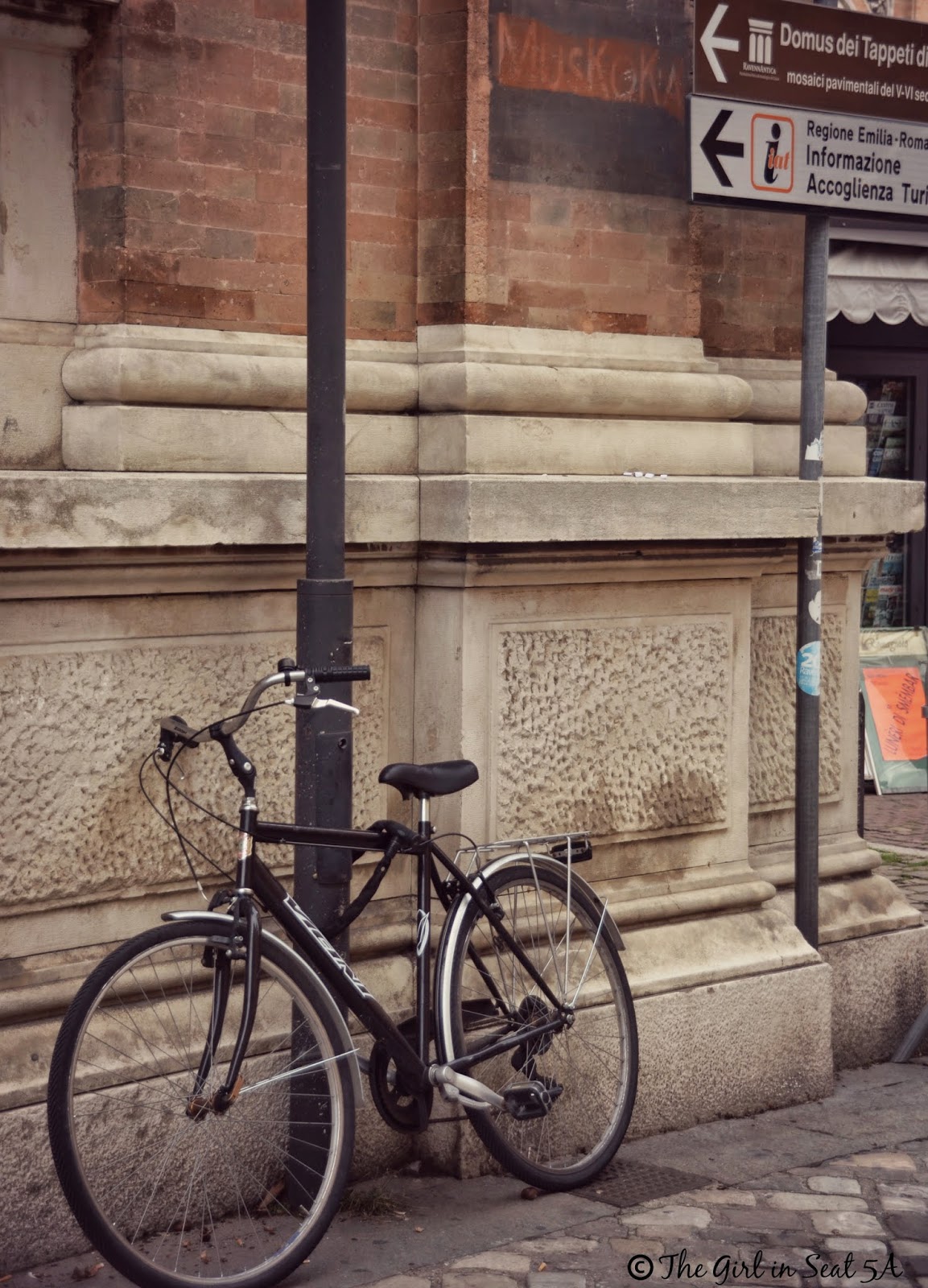 We were docked in Chioggia when we went to Ravenna, so it was about a 1.5 hour bus ride for us each way. If you want to do a day trip to Ravenna from Venice, it’s a bit more cumbersome. There are no direct trains – you would transfer in Bologna and total travel time is about 3 hours each way. If you wanted to get there on four wheels, you’d either have to rent a car or try to find a tour company that could take you by bus – and it would take a little more than two hours to get there. Honestly, if it’s somewhere you really want to visit and you are based in Venice, it would likely be best to do an overnight stay.
Located in the Emilia-Romagna region of Italy, Ravenna used to lie closer to the Adriatic in ancient times, and was a prosperous seaport. From 402 AD to 476 AD, Ravenna was the capital of the Western Roman Empire and a very powerful city (until the Empire fell). At this point, it went through a bit of an identity crisis – first under the power of a barbarian ruler, then an Ostrogothic king. In 540 AD, Ravenna became part of the Byzantine Empire for almost 200 years. This particular influence is still very evident in its beautiful churches and mosaics – which have been collectively designated as a World Heritage Site.
Today, Ravenna is a lovely, laid-back town that is easy to wander around on foot. Quiet little piazzas, streets lined with stores and restaurants, and friendly inhabitants will make you want to stay for more than a day. 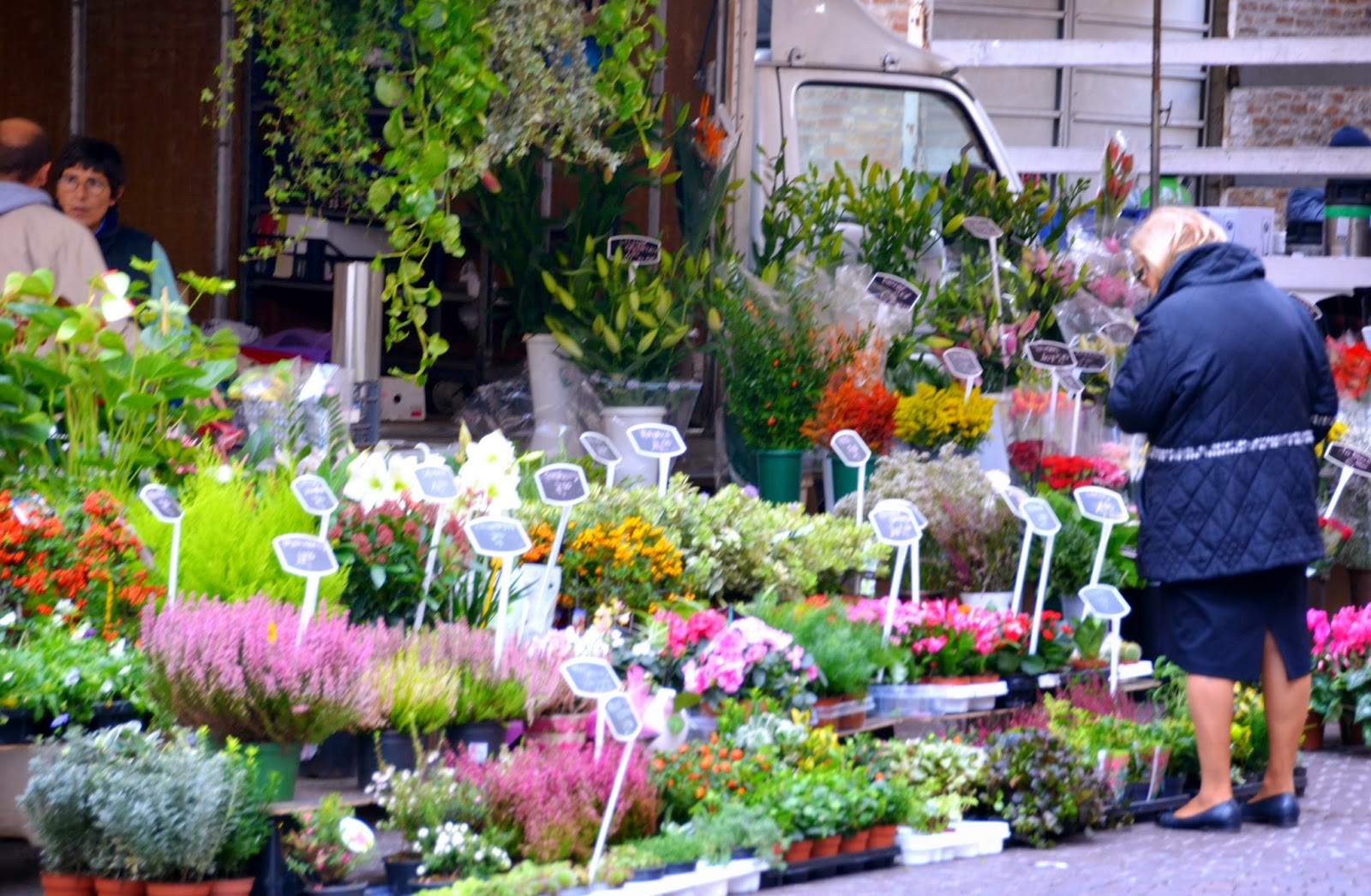 But if your time is limited, like ours was, there are two absolute must-sees in Ravenna: San Vitale Basilica and the Mausoleum of Galla Placidia.
San Vitale Basilica
Construction began on San Vitale in 526 AD and finished in 548 AD, when Ravenna was under Byzantine rule. It’s a rather small church, and its plain exterior fools you into thinking the interior might not be anything special. 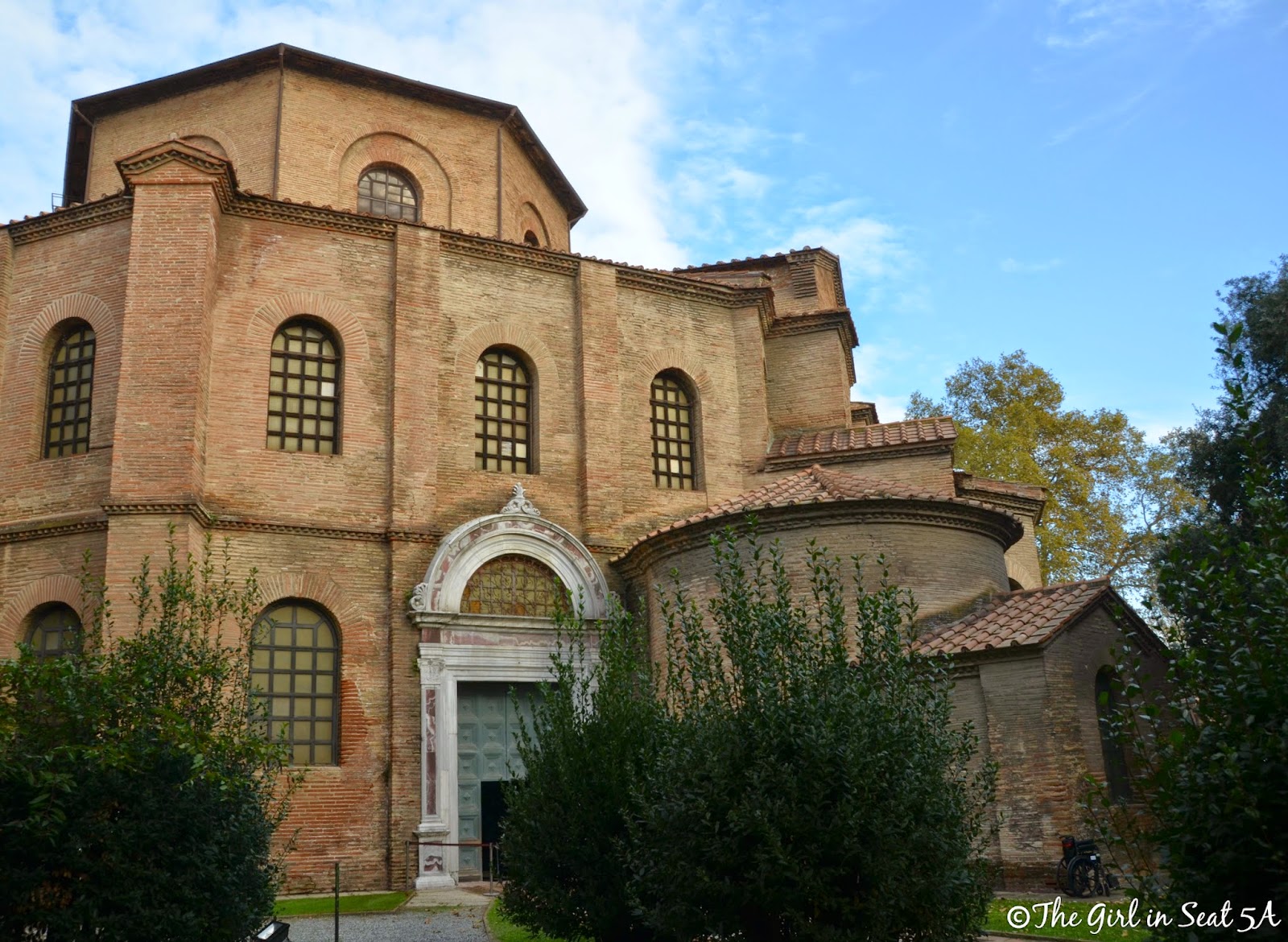 Wrong! You will be absolutely blown away by the stunning, glittering mosaics inside. The color and the detail of the many scenes are simply amazing. This is definitely a place you will want to spend some time in…but beware that your neck will hurt from looking up at all this beauty after a while. 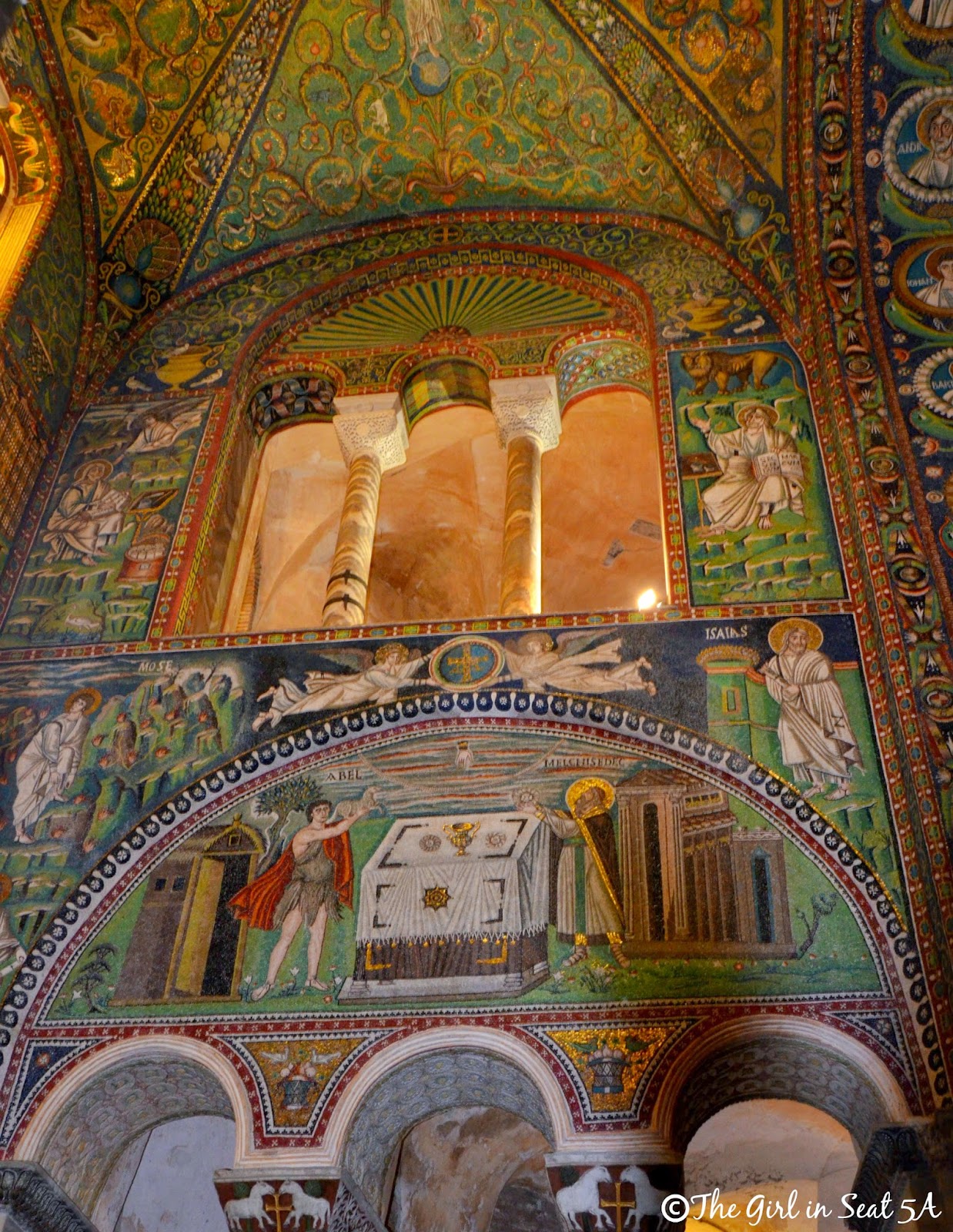 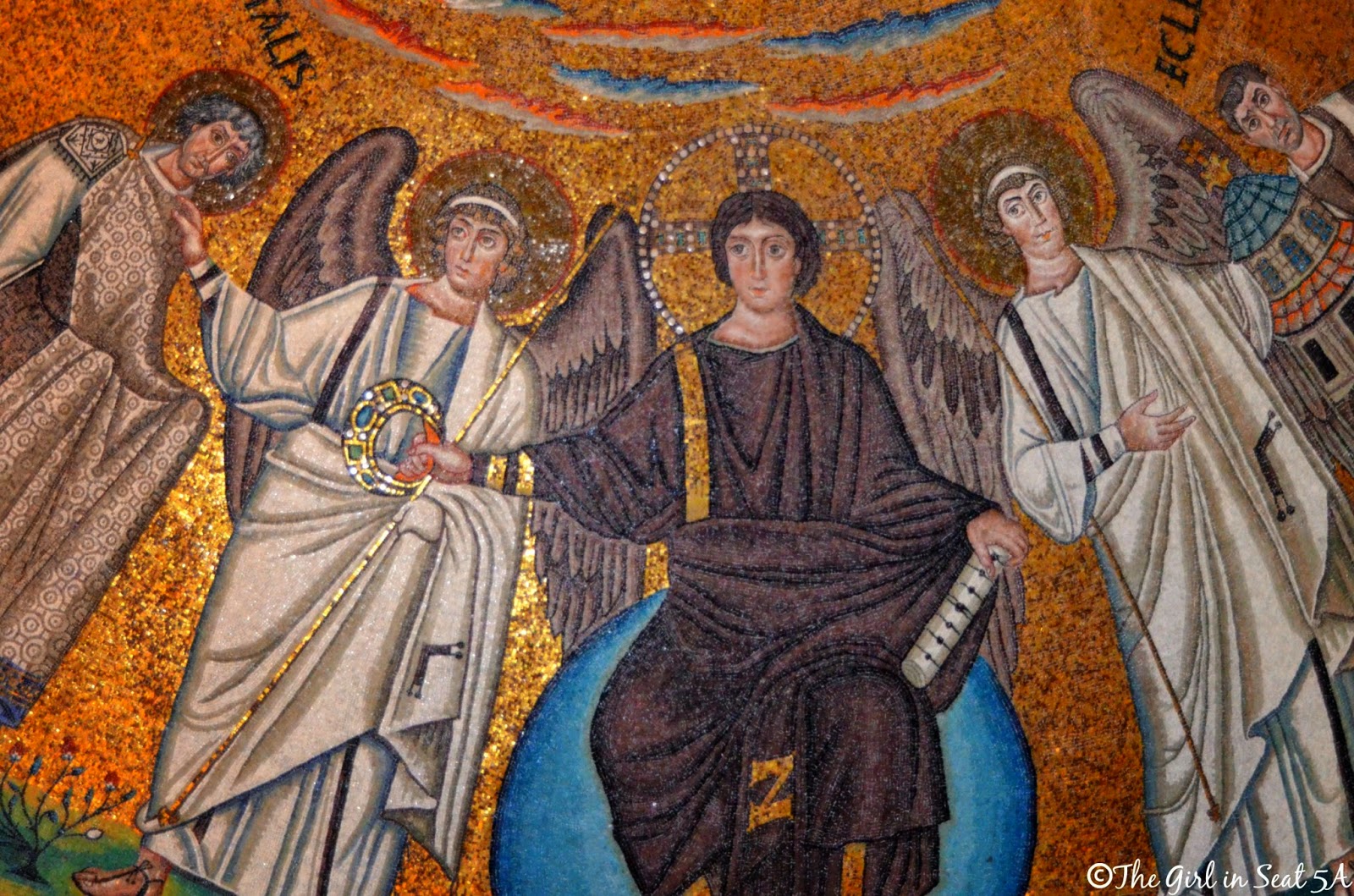 If you exit at the back of the church, you will find yourself on a short path that takes you to the other must-see site in Ravenna:

The Mausoleum of Galla Placidia 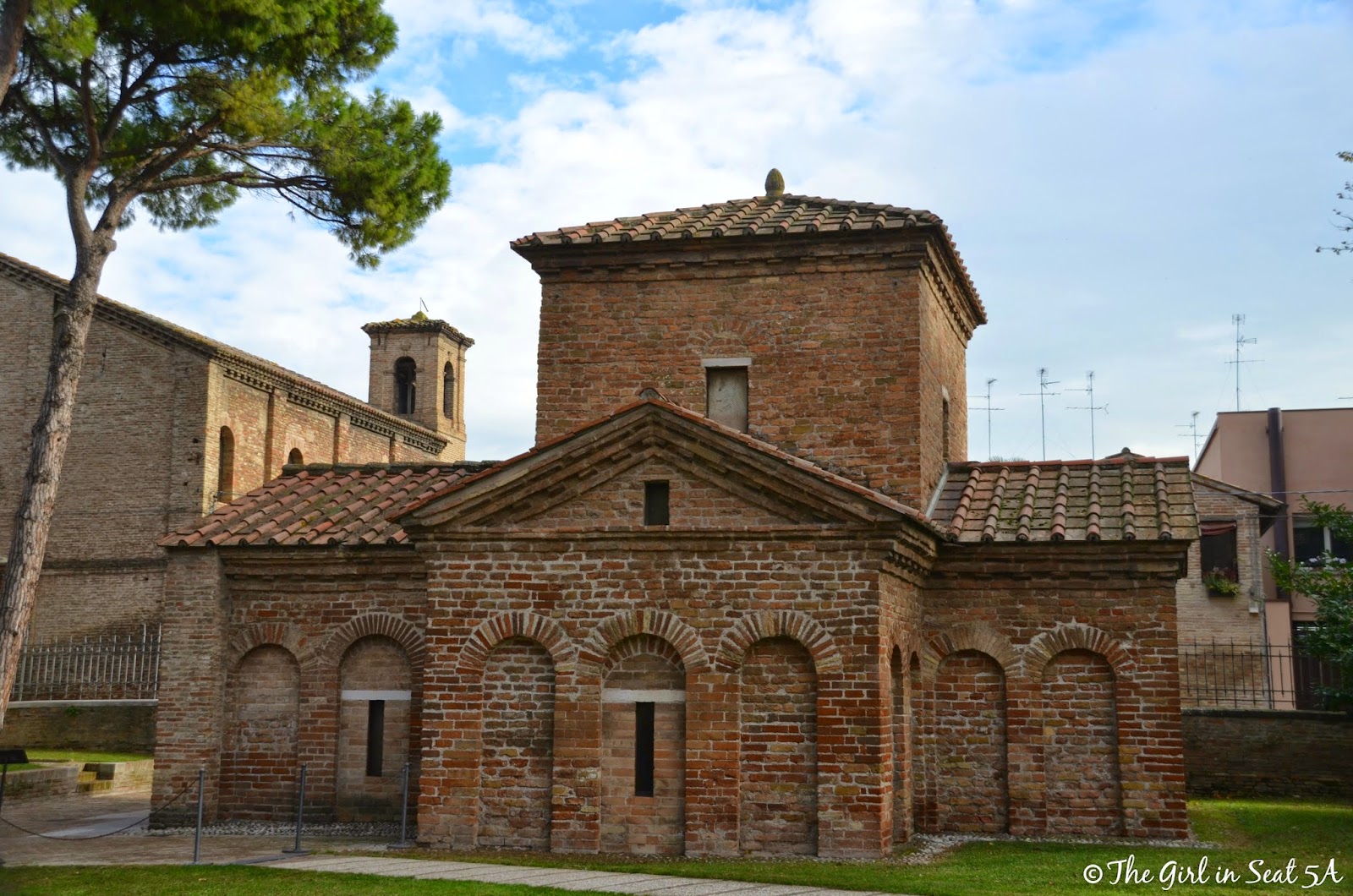 Built around 430 AD, the small Christian chapel measures 40 feet by 30 feet, and, like the Basilica, is very plain looking on the outside. Even though it’s named The Mausoleum of Galla Placidia, it is now widely believed that she was never entombed there, but actually had it built to serve as an oratory. There are three sarcophagi inside – one was originally thought to contain the body of Galla Placidia. However, the remains were accidentally burned in 1577 by some naughty boys who dropped the candles they were using while trying to get a peek inside the sarcophagus (whoops!). The other two are said to contain family members of Galla Placidia – some say her son, her brother, her husband – but there is really no way to be certain.

The mosaic ceiling in the oratory is amazing. It portrays a brilliant blue sky with over 800 gold stars placed in concentric circles around a golden cross. Rumor has it that, upon seeing this during his honeymoon in the 1920s, Cole Porter was inspired to compose his song “Night and Day”. I don’t know about that, but I do know that I was inspired to write this paragraph about it and include a picture below. Now that’s saying something! 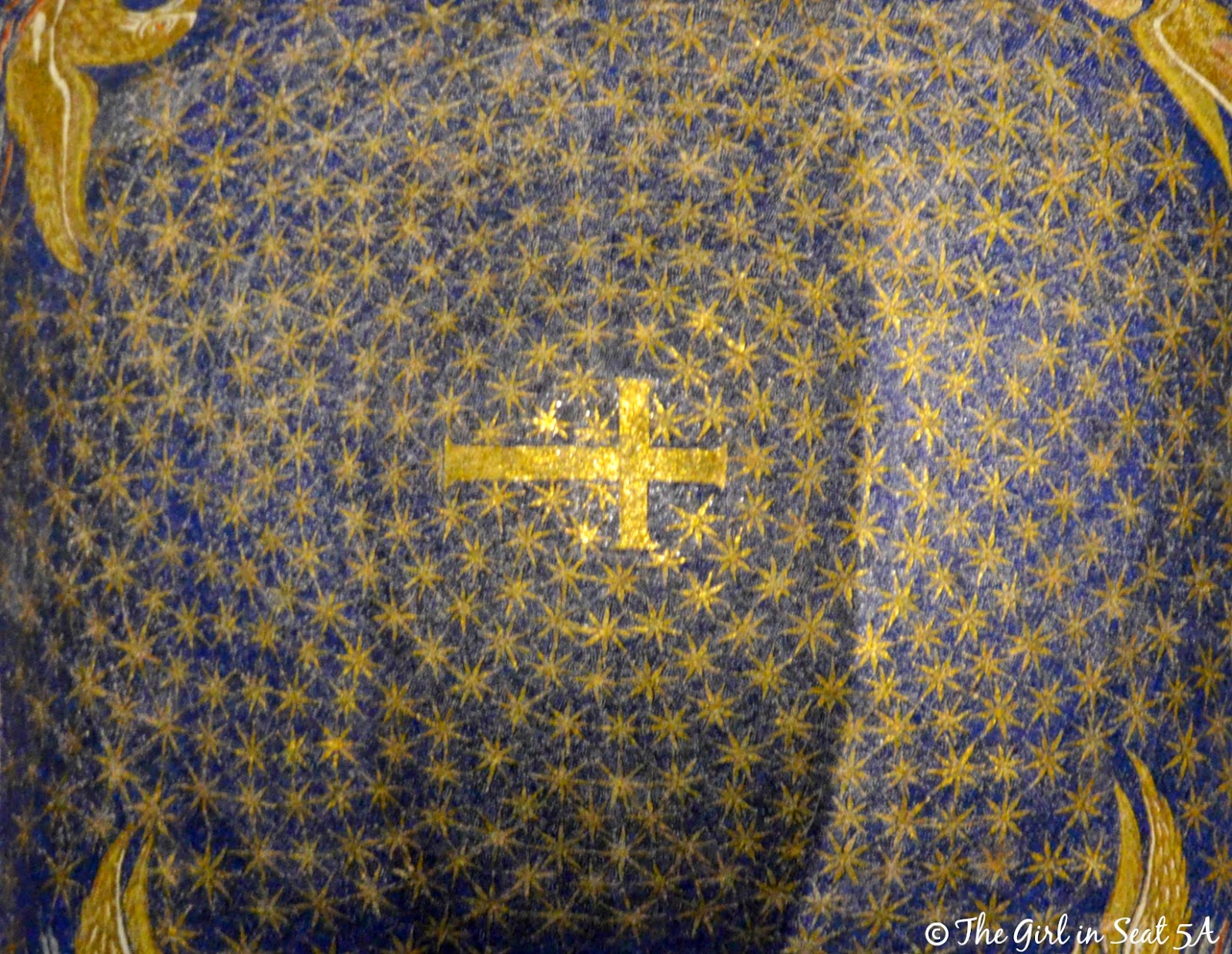 Around the mausoleum, there are fourteen windows made of alabaster – which is supposed to improve the viewing of the mosaics. 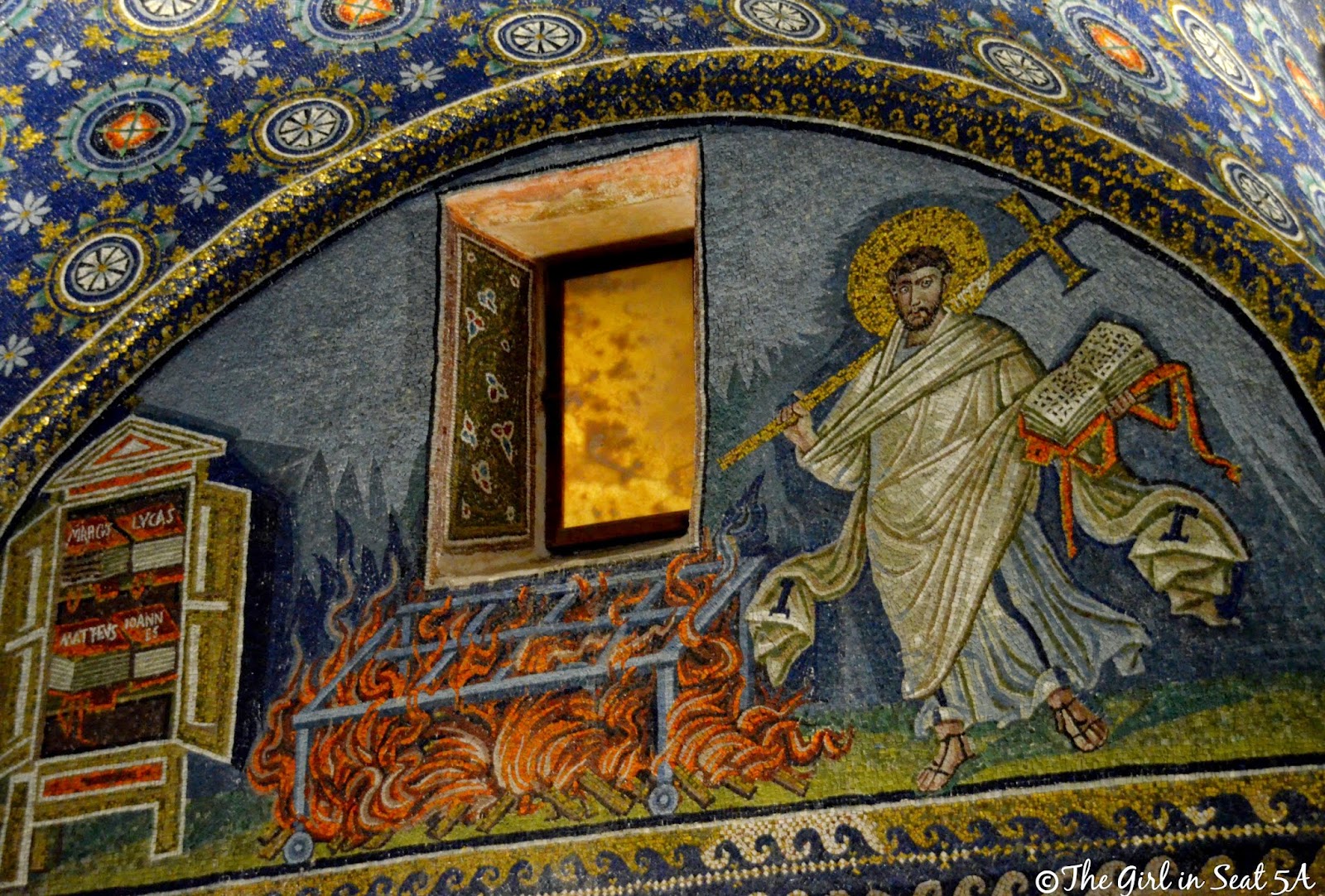 After visiting these two beautiful places, we wandered around the town, which was quite charming. We didn’t have enough time, but if you do and want to see more mosaics, you should also go to the Basilica di Sant’Apollinare Nuovo and the Basilica di Sant’Apollinare in Classe (the latter is a few miles outside of the actual town of Ravenna). If you are a Dante fan, his tomb is located in Ravenna as well.

The last city we visited (and my favorite) was Verona. Founded in the first century BC, Verona is located north of Venice and situated on the River Adige. Like Ravenna (and almost every other city in Europe), Verona was occupied, conquered, liberated, occupied, conquered and liberated again throughout its early history. It finally became (and stayed) part of Italy in 1866.

Arriving in Verona by bus, we had to walk across this bridge over the River Adige to get into the city center. 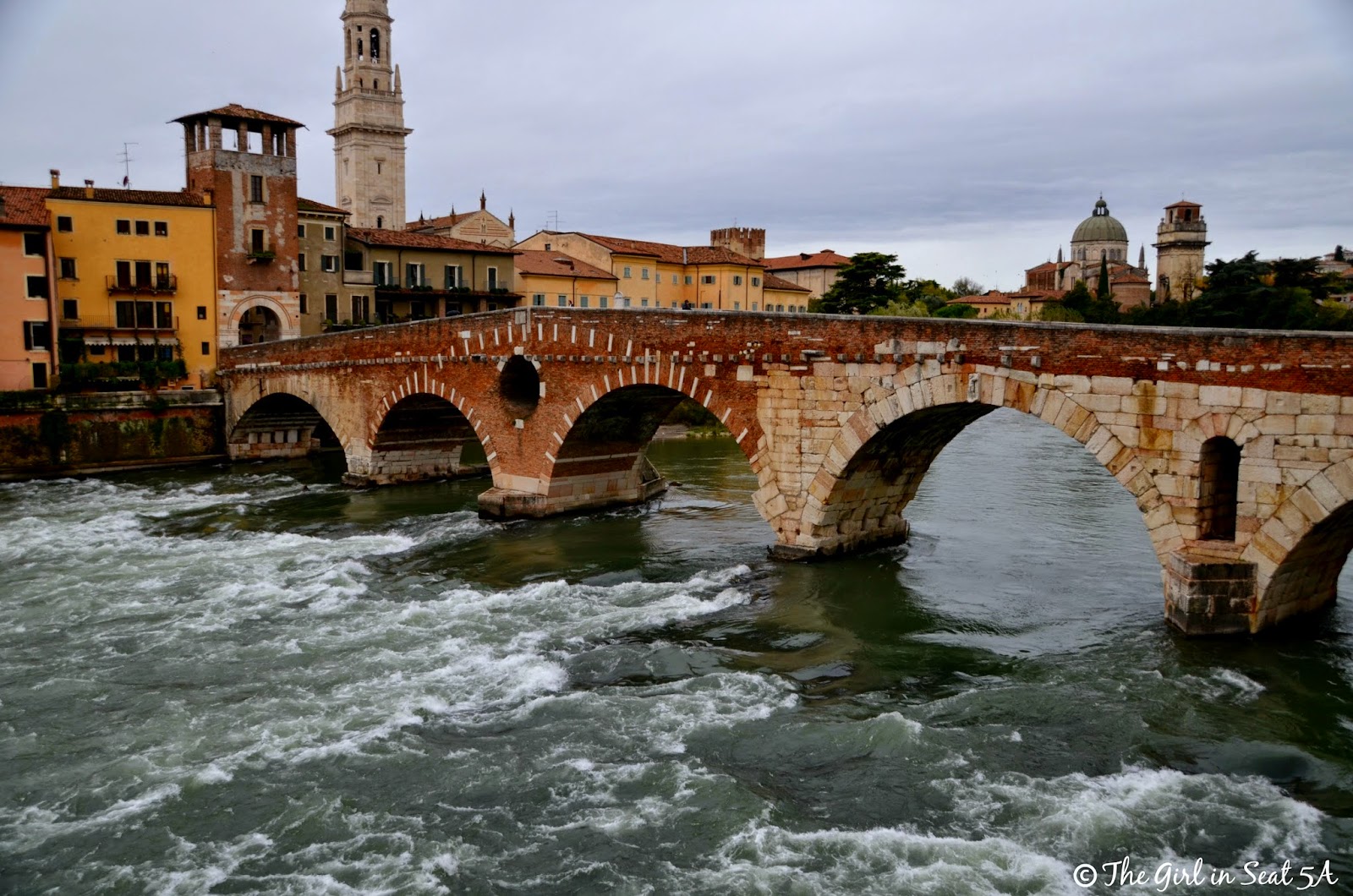 Our guide led us through the old streets of the city, pointing out things of interest along the way. We stopped in Piazza dei Signori to look at the imposing statue of Dante (doesn’t it look like that guy behind him is planning to throw whatever he’s holding at Dante’s head?). 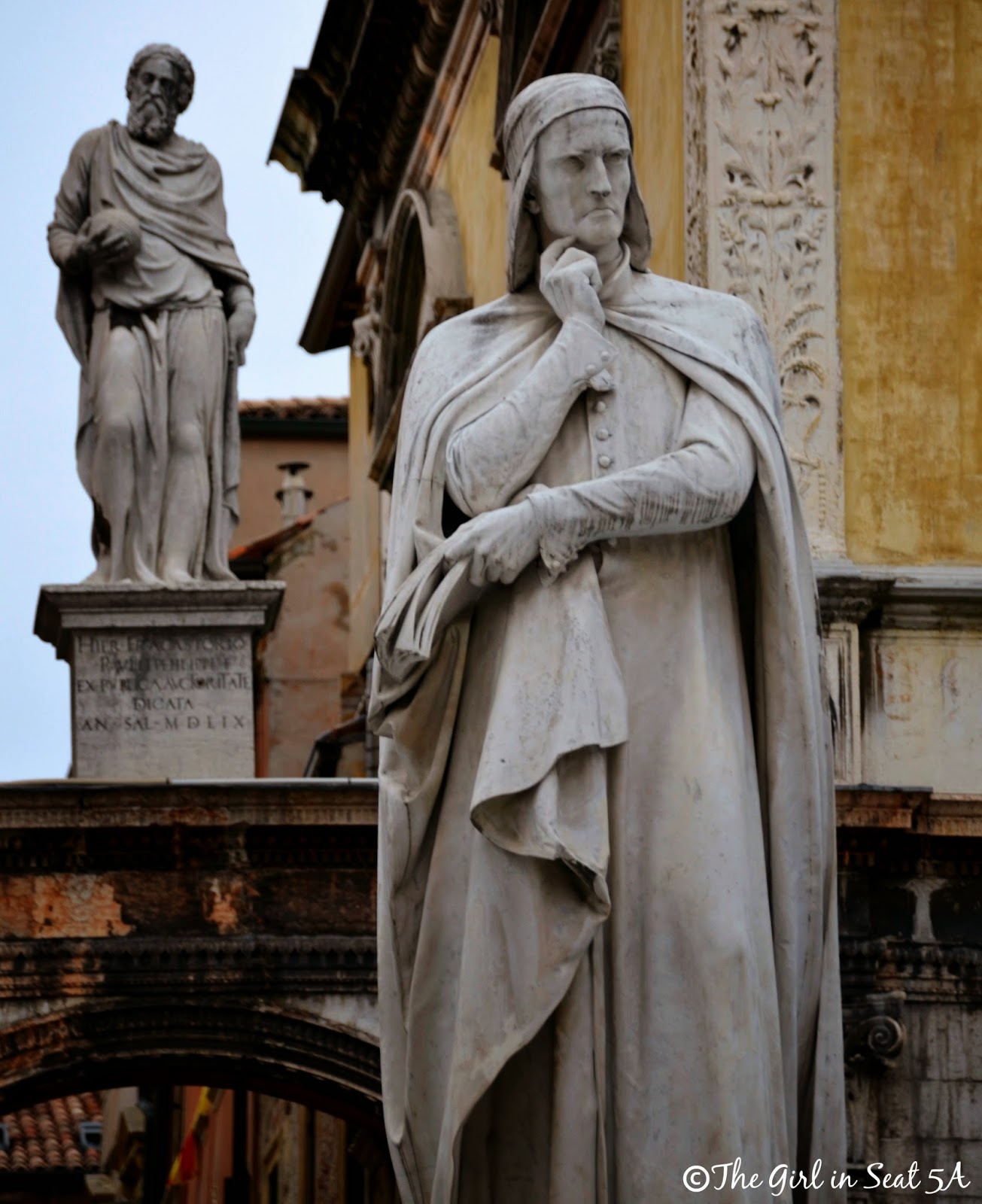 We then walked through the Arco della Costa where a whale rib hangs suspended from the top. 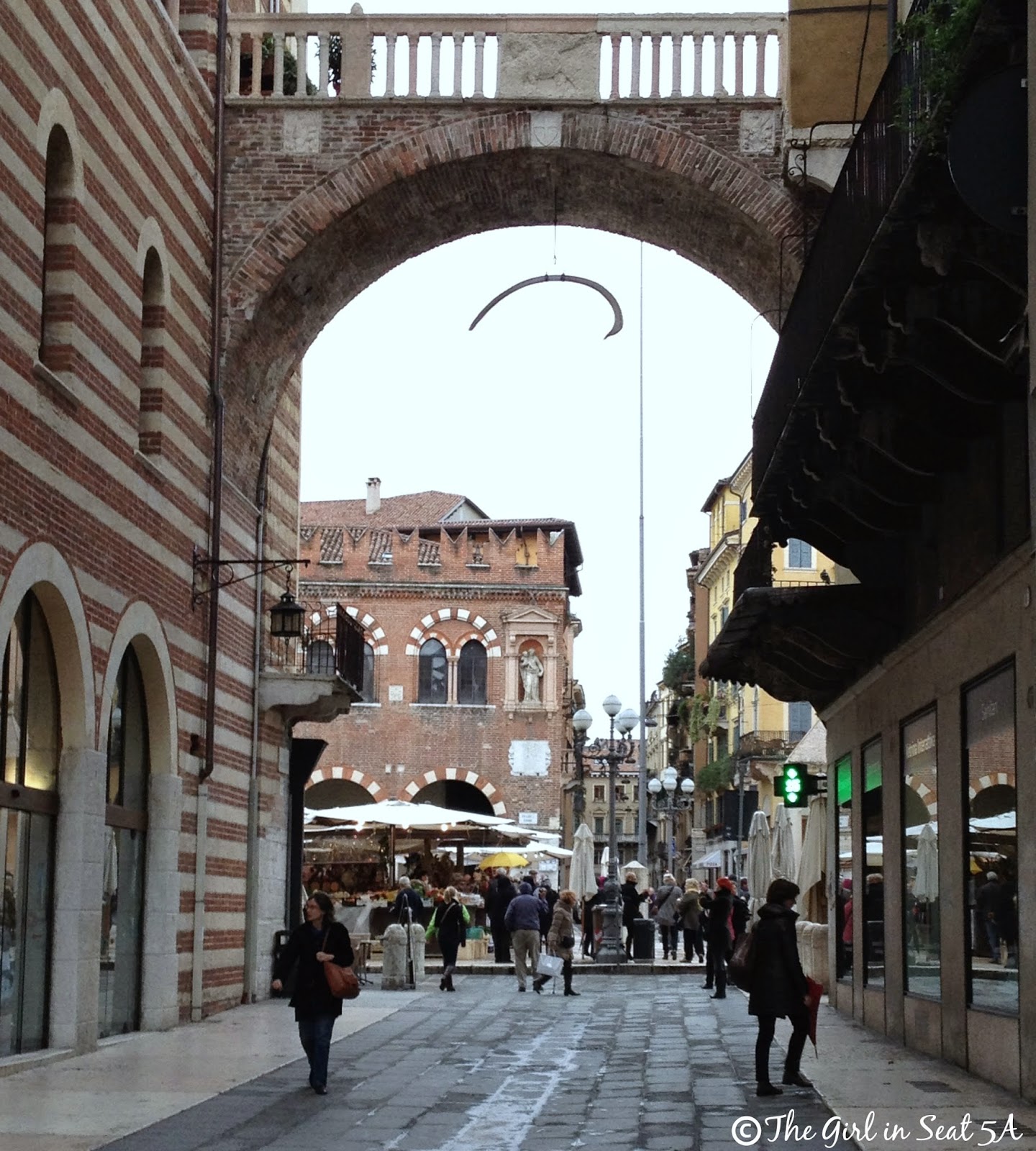 Passing under the arch, you will find yourself in Piazza delle Erbe, which used to be a forum in Roman times, but now its mostly filled with vendors selling souvenirs to tourists. Surrounded by cafés and bars, it’s still a fun place for tourists and locals alike.

Of course, the big draw for a lot of people is the fact that Verona is known as the city of Romeo and Juliet. I want to believe that every tourist that visits here knows that neither Romeo nor Juliet were real people who lived in Verona – but judging by the crowds, love locks, and amount of hand-scribbled notes in the courtyard where the House of Juliet and her balcony are located – I’m afraid that is not the case. 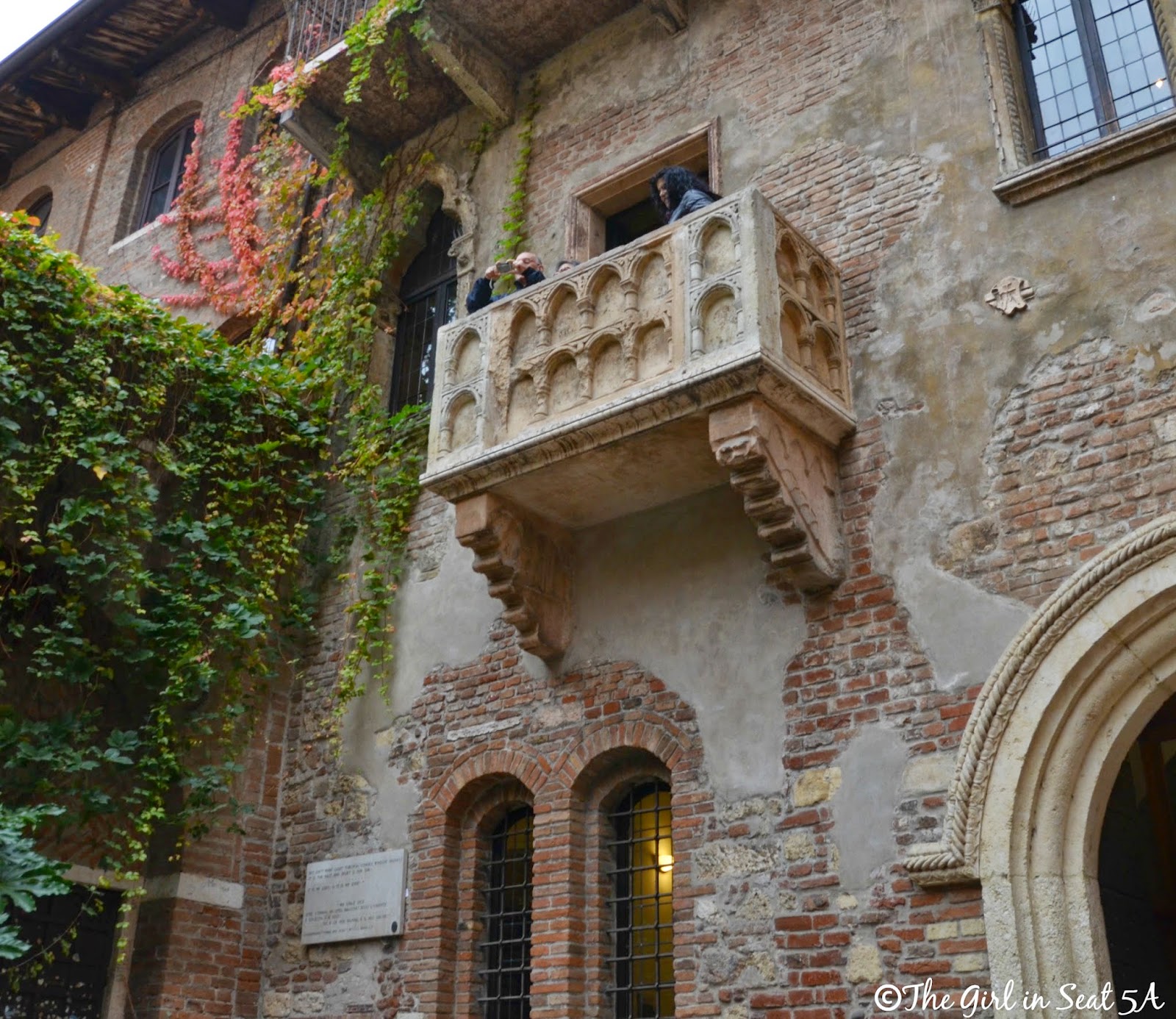 I will admit that I didn’t pass up the chance to rub the right breast of Juliet’s bronze statue, which is supposed to bring you good luck in love (but I did feel kind of pervy doing it). FYI, that was a year and a half ago and I’m still single, so make of that what you will.

After pointlessly groping a statue, we walked down Corso Porta Borsari, which is Verona’s main drag and shopping street. As you stroll along the Corso, don’t forget to look beneath your feet to try and spot the various fossils embedded in the marble.

Make some time for a quick visit to the Roman arena, which is the third largest in the world and dates back to the first century AD. Once the site where gladiators battled, you can now go there to see plays and Verona’s summer opera festival. 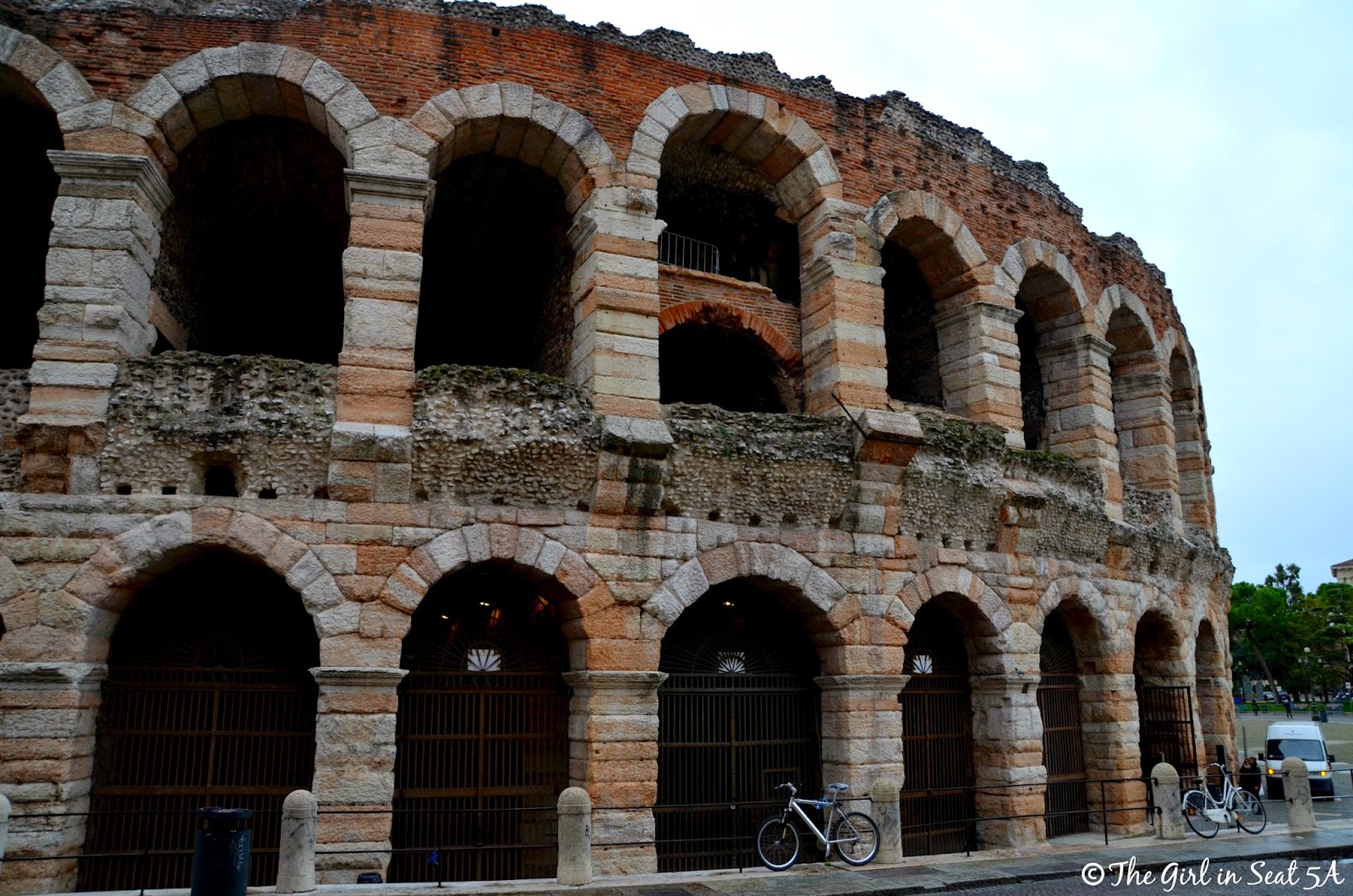 I could have easily spent a full day or two in Verona. Even though it doesn’t have many world-famous sites, it’s a great town to just savor the magic of being in Italy.

Have you Ravenna or Verona? Did you love them as much as I did? More importantly, did you find your true love after rubbing Juliet’s breast? I want to know in the comments below!

« Padua and Bologna: Sorry, I’m Just Not That Into You
Street Art: A Paris Invasion »