I was so, so, SO excited about going to Venice. Even though a lot of our itinerary was already planned for us as part of the Uniworld cruise we would be on, I also knew we would have some time to explore on our own. So, I did my online research, read some guidebooks and watched the Venice episode of Anthony Bourdain’s No Reservations about ten times (okay, okay, I mostly did that because I have a crush on him). 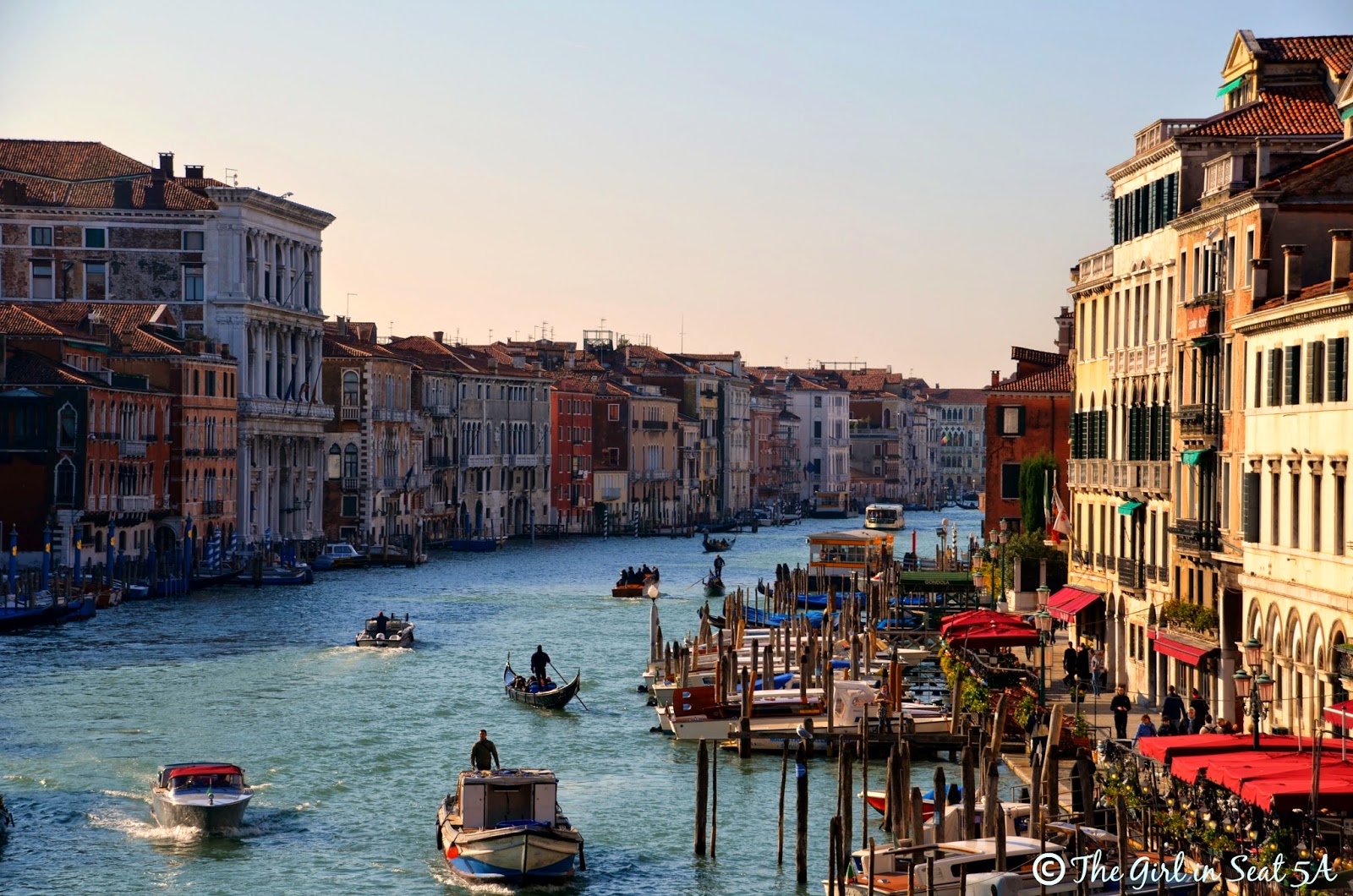 I was convinced that I was going to absolutely love Venice…the canals, the bridges, the grandeur of an aging, but still magical, city. In reality, however, it ended up being kind of a mixed bag for me. It’s possible that I would have had a different experience entirely if we actually stayed in Venice instead of on the ship, but the truth is that it just didn’t grab me the way I thought it would. I liked it, but I remember thinking more than once that it didn’t even feel like we were in Italy.

Maybe the Venetians would have been happy to hear that, given the fact that the majority of them actually voted to secede from Italy in March, 2014. This sentiment has been brewing for a very long while, but has increased drastically in recent years because they pay billions of Euros to Rome in taxes and don’t believe they get back what they are due.

Secession aside, I know many of my fellow travelers are crazy about Venice and return there time after time. I think it is an absolutely amazing place to visit, but once was most likely enough for me. I will stipulate that by saying there were a lot of things that I wanted to see but didn’t have time to (like the islands of Murano and Burano), so if the right opportunity presented itself in the future, who knows?
There were some things about Venice that I loved, some things that I didn’t, and some things that can only be experienced to their fullest in that unique and unforgettable city. 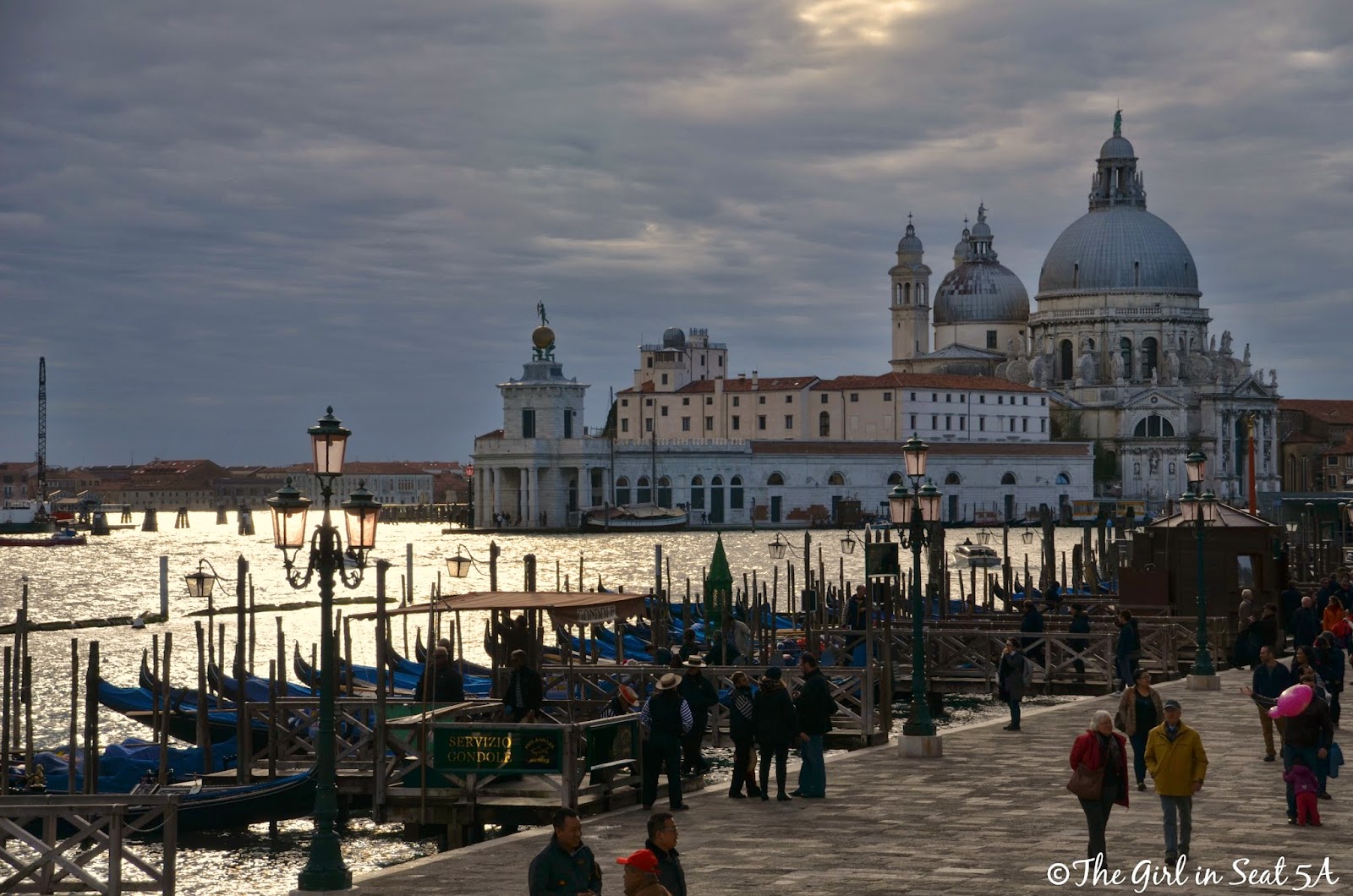 St. Mark’s Basilica
One of my favorite experiences on this trip was our private “illumination” tour of St. Mark’s Basilica. We took water taxis from the ship to the Basilica, but due to acqua alta in St. Mark’s Square, we had to walk around and enter through the back of the Byzantine structure. At first, there were barely any lights on, so we carefully made our way to our seats.
A local guide and historian began by giving us the history of the Basilica and the fascinating story of how the remains of St. Mark were smuggled to Venice from Egypt. Then, the lights were slowly raised. You could have heard a pin drop as everyone just stared with mouths agape at the stunning golden mosaics that seemed to glow around us. 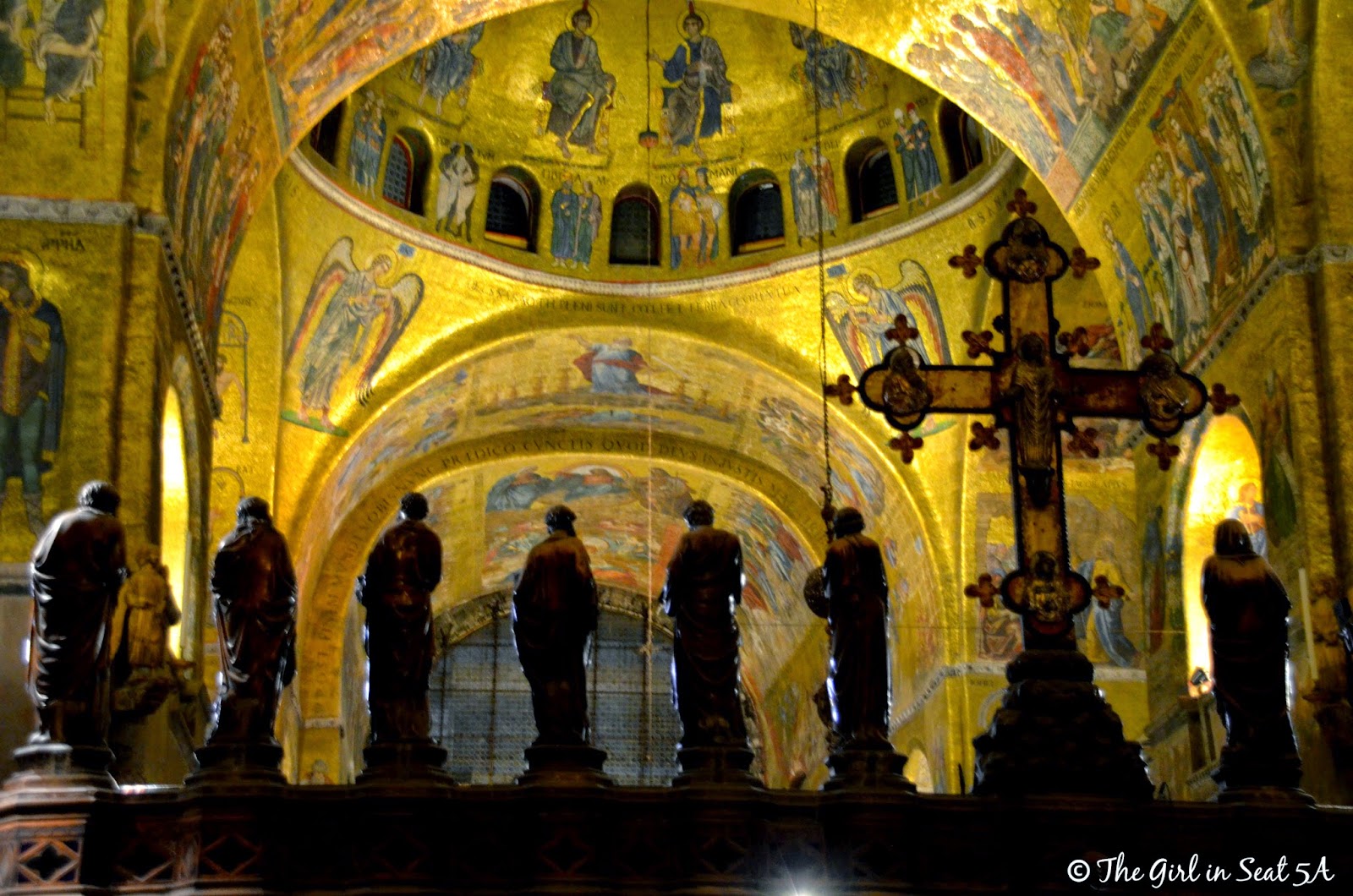 We had a chance to get up close to the beautiful altarpiece – a panel of gold covered with countless gems – known as the Pala d’Oro (Golden Pall). 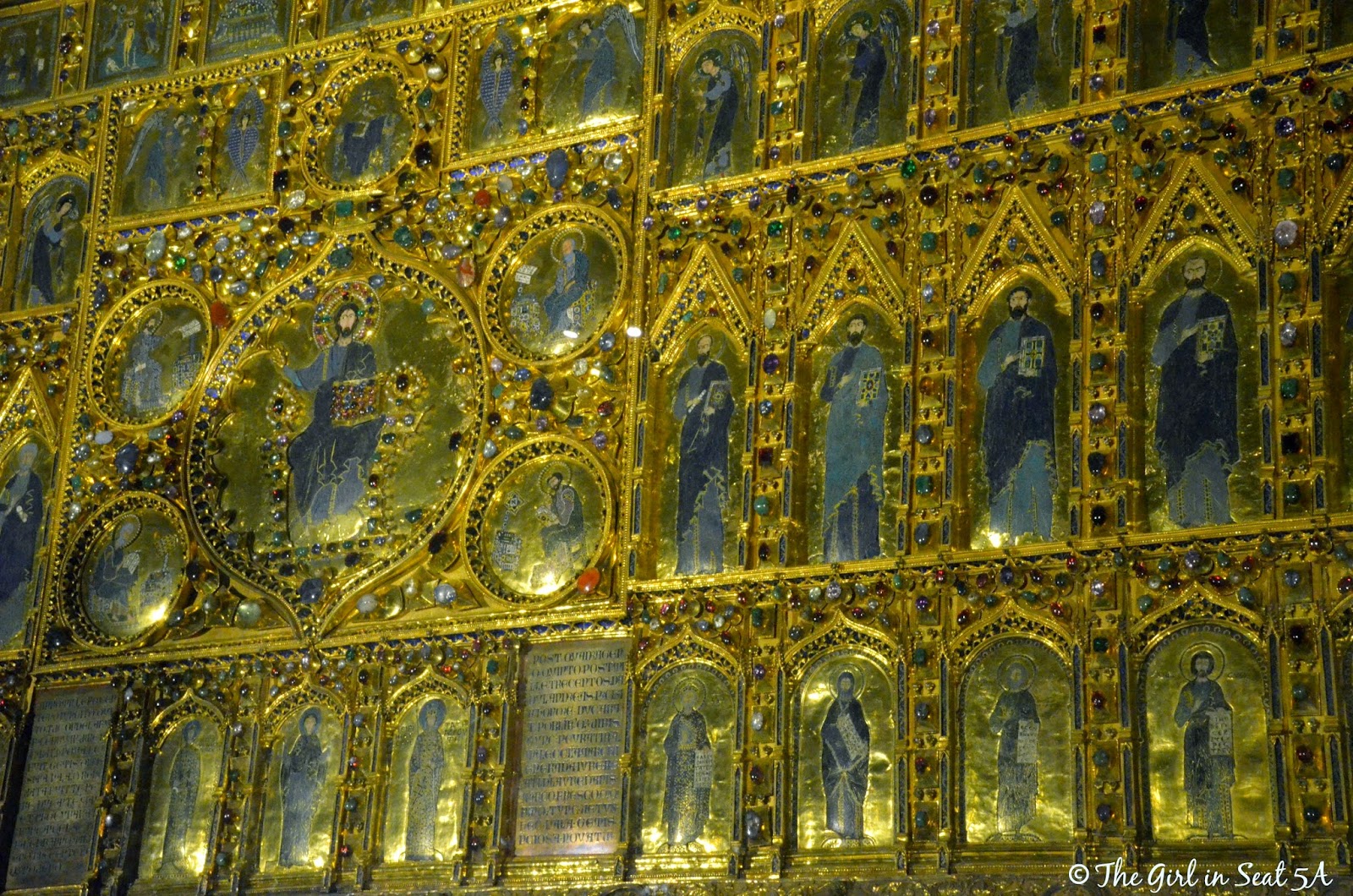 It was so amazing to be one of less than a hundred people in the whole Basilica. When we walked past at other times throughout our trip, the lines of people waiting to enter were endless. I couldn’t imagine being able to enjoy it even half as much with all those people packed inside – so I was very grateful that Uniworld gave us such a unique experience.
Doge’s Palace
I enjoyed Doge’s Palace (Palazzo Ducale) a lot more than I thought I would. Originally built in the 9th century A.D., it used to be a lot bigger than it is now. After suffering some pretty severe fire damage, it was rebuilt and became the beautiful, multi-colored Gothic structure we see today. 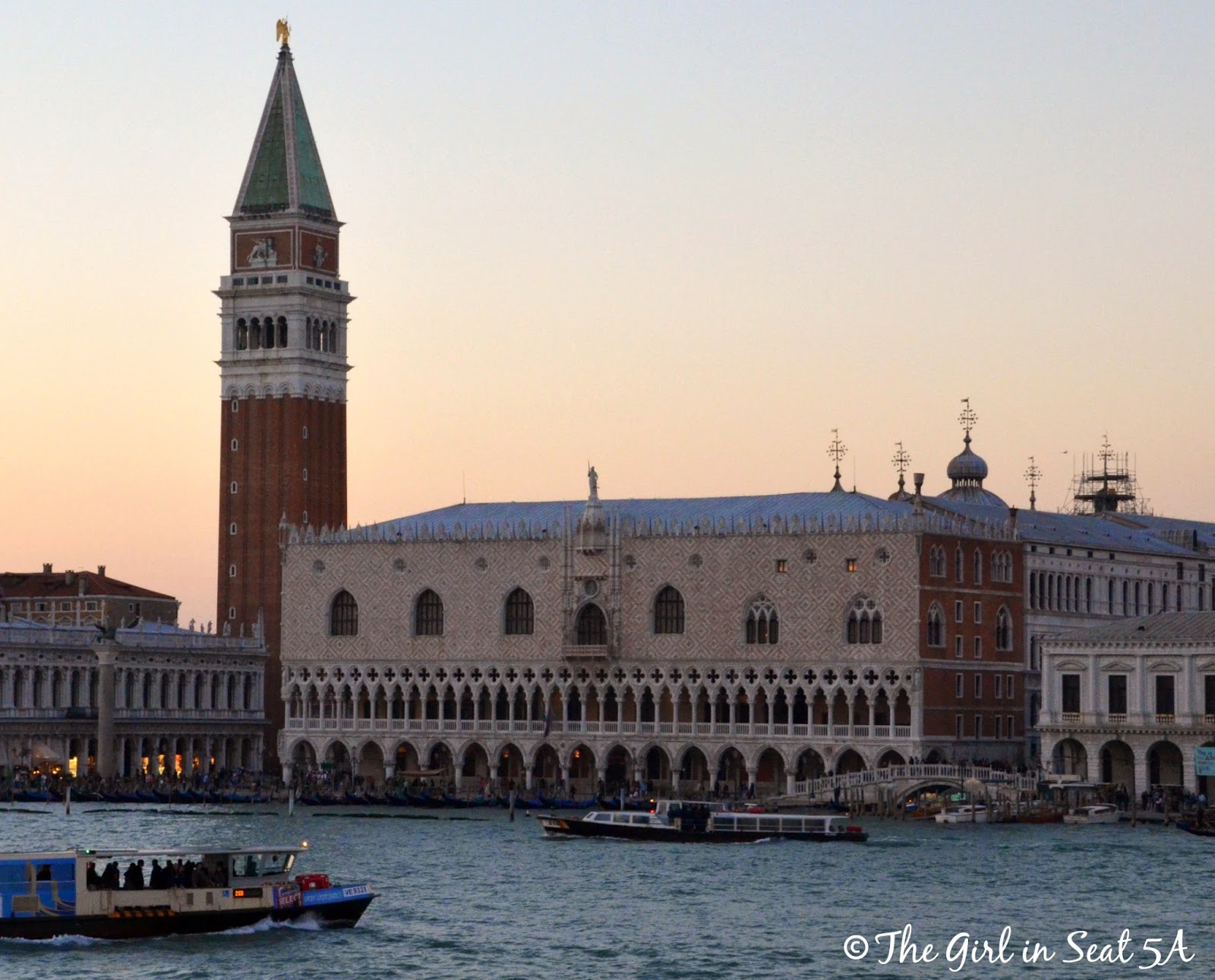 The Bridge of Sighs was completely different than I expected, but it was still really cool to walk across it and look out the tiny windows that the prisoners often caught their last glimpse of the outside world through. 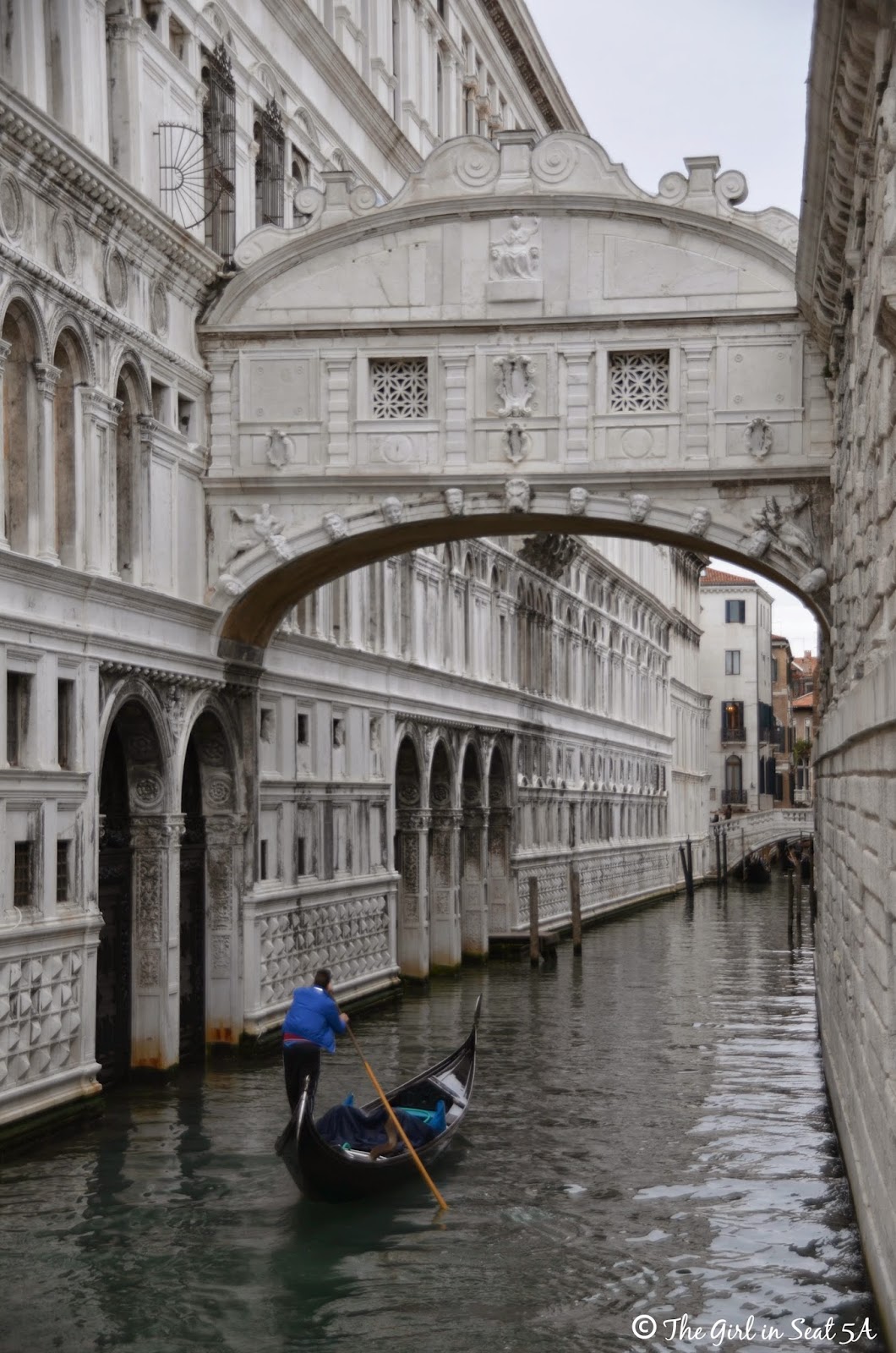 The Unique Beauty of the City
Venice is just so different from any other place I have ever been. I mean, the city itself is situated on over 100 small islands separated by canals and connected by bridges. Because cars are not allowed, it’s an entirely pedestrian city (well, except for all the boats, of course), which makes it a great city to wander around. 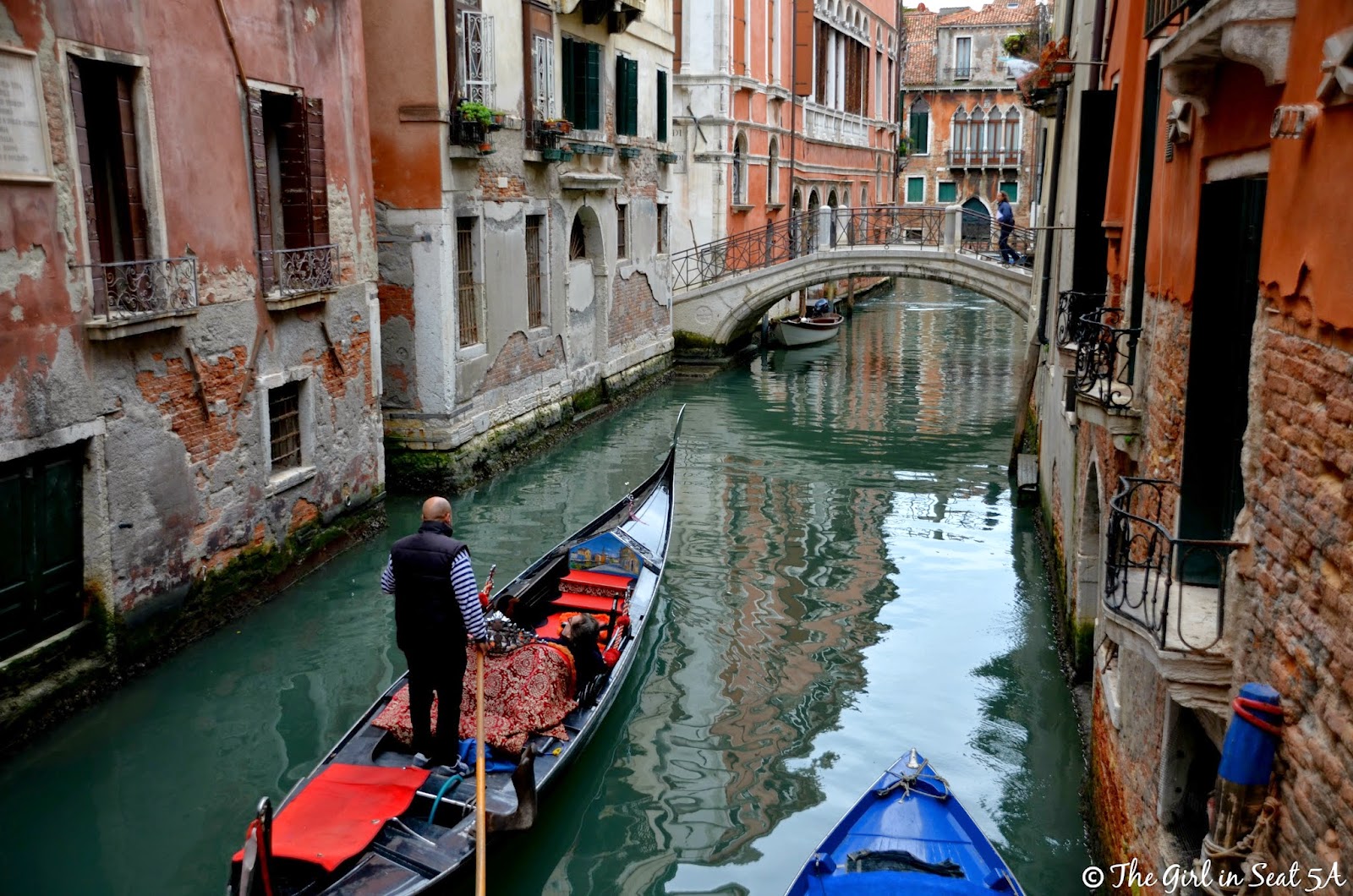 No matter how many pictures you see of Venice, you still cannot grasp how amazing it is until you see it with your own two eyes. Even with the obvious deterioration that’s happening, there is still beauty all around you.
Caffè Florian
Though extraordinarily overpriced (12€ for a cup of hot chocolate!!!), the experience of going to the famous Caffè Florian is worth it. Open since 1720, the café is the oldest in Italy (according to its website). Over the years, famous people like Lord Byron, Charles Dickens, Marcel Proust and Modigliani (among many others) have been guests at the café. 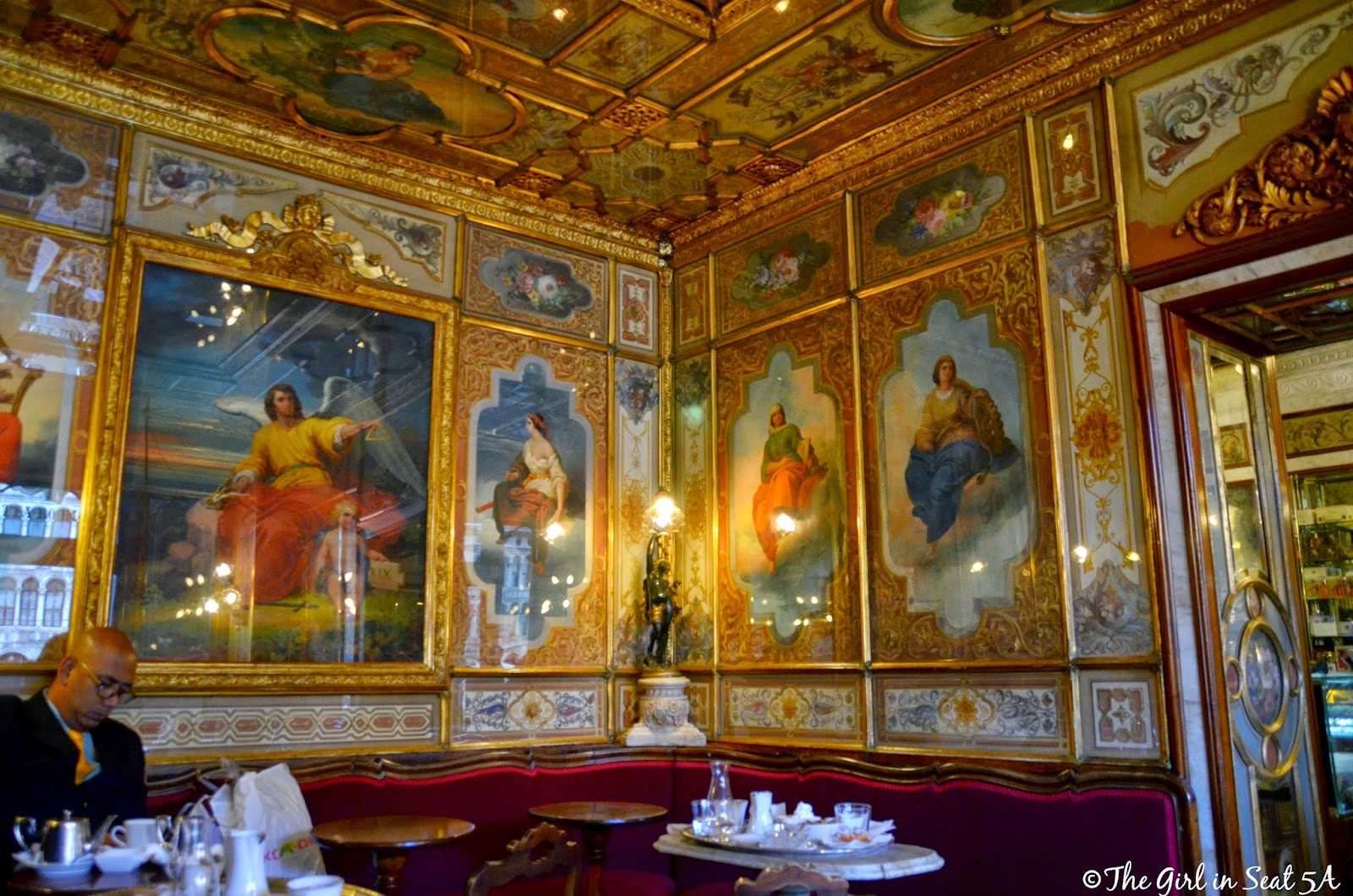 Situated right on St. Mark’s Square, the location can’t be beat. The inside is elegantly decorated with the frescoes on the walls protected by plexiglass.  A small orchestra plays right outside on the piazza, adding to the almost surreal feeling you get while dining there. Luckily for our wallets, we weren’t hungry when we went, but we did enjoy the hot chocolate with whipped cream, which was delicious. 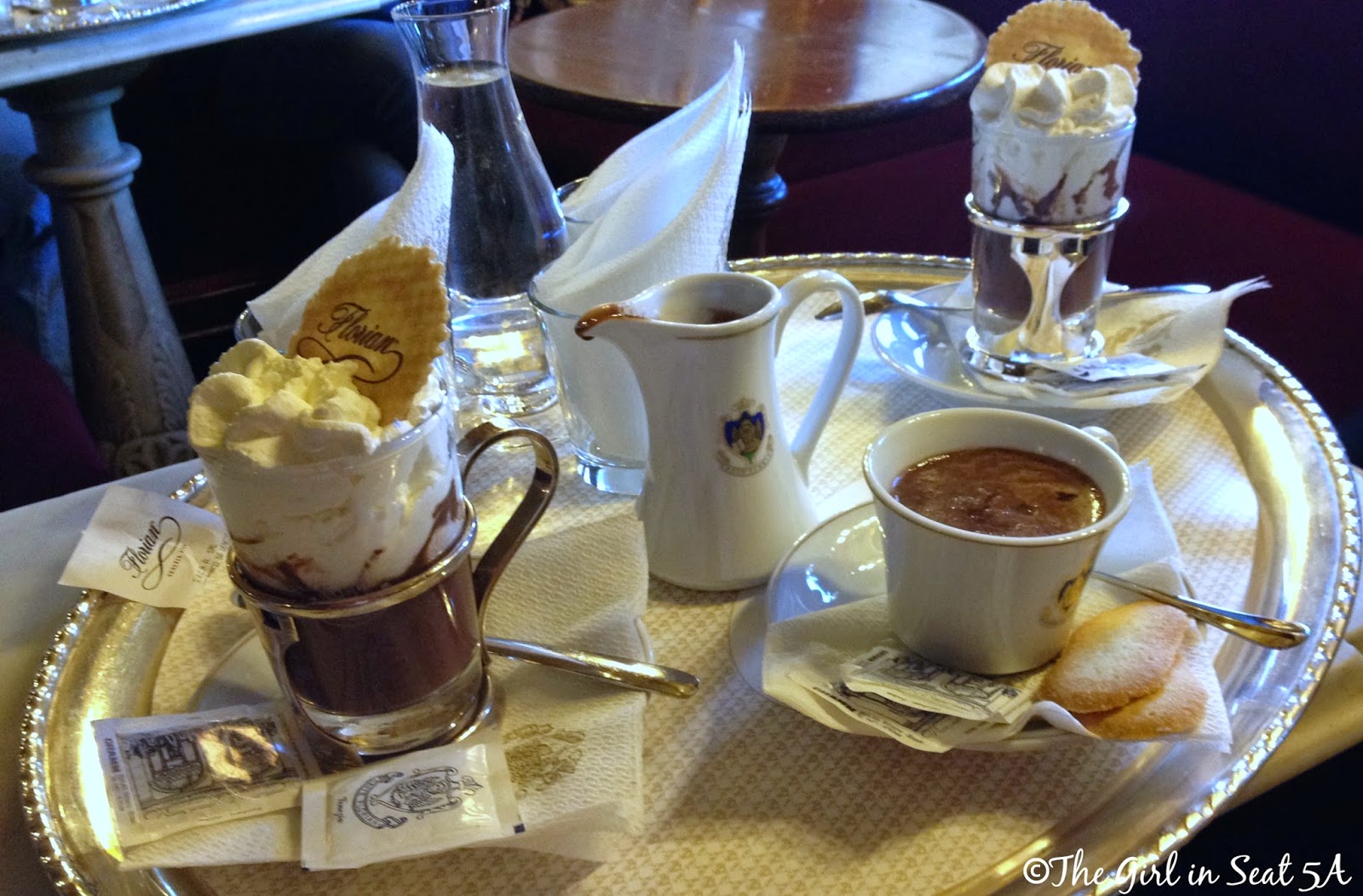 Crowds
Holy cow, it is crowded in Venice. We were there toward the end of November, which is usually my favorite time to go to Italy because the crowds are relatively non-existent. Not in Venice! There were gazillions of tourists flooding in from the huge cruise ships every day. Stores were packed, the attractions were packed…it was only when we got lost one day and wandered around away from the city center that we even had room to breathe.
Difficult to Navigate
This is not a city for the elderly or disabled. Although most of the main bridges leading from where our ship was docked along the lagoon to St. Mark’s Square had ramps, not one of the bridges we came across “inside” the city did. My mom is not handicapped, but she does have trouble with stairs and steep climbs, and it was sometimes very difficult for her.
It’s also not a city for people with no sense of direction. Even with a paper map and a map on my iPhone, I got us lost plenty of times. Street names change seemingly without reason, they often dead end at canals, and there’s a bridge every 20 feet, except for when you need one.
The Pigeons
They are EVERYWHERE. One of the things that simply confounded me was that some people actually wanted the pigeons to land on them. WHY??? Why would you want that?? 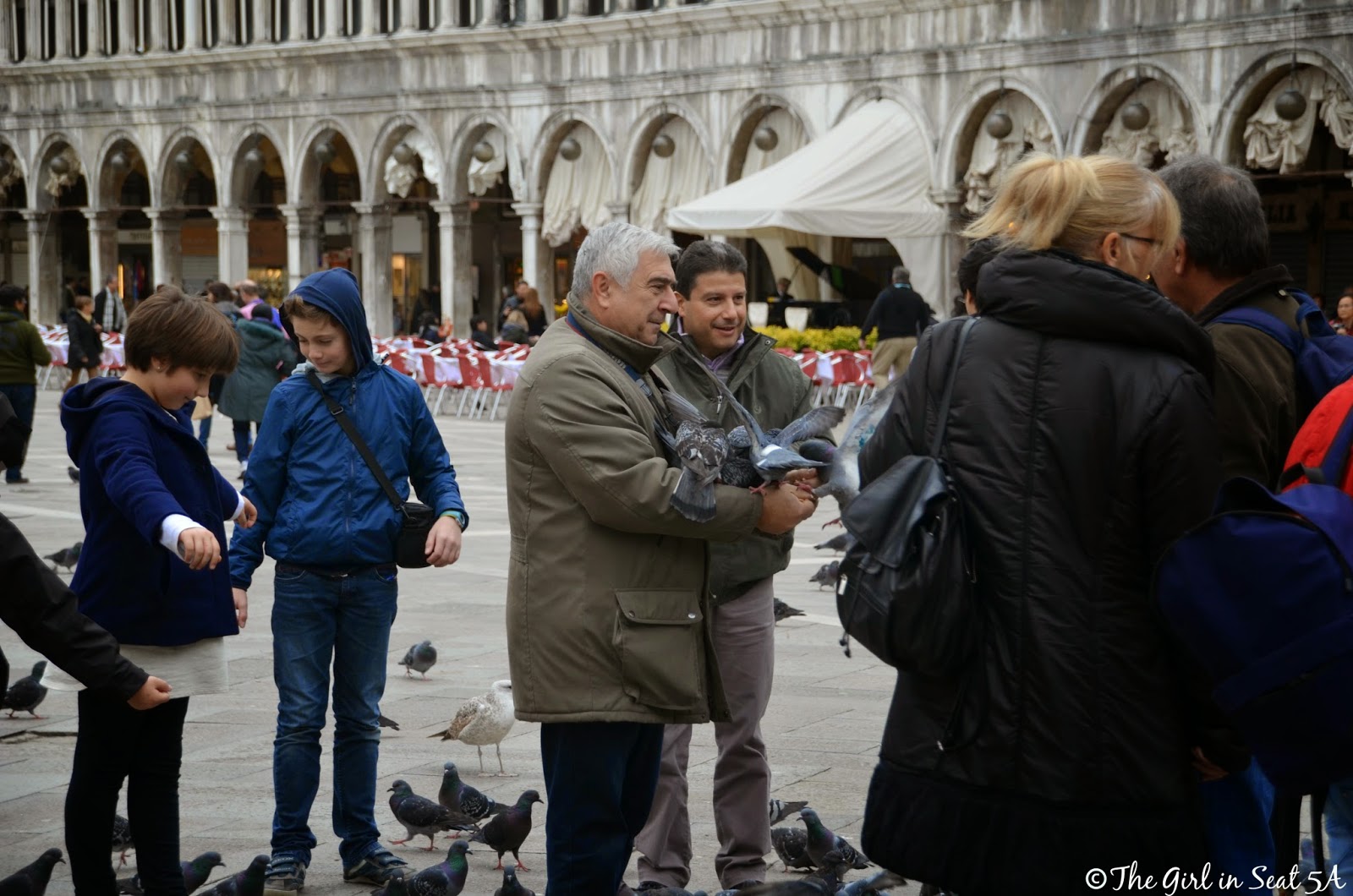 The entire time we were there, I lived in abject fear that one would poop on me. Luckily – for me, that is – my aunt was the one who got pooped on (seriously). I have no shame in stating that I would have had a complete meltdown and demanded we return to the ship immediately if it had happened to me, but my aunt handled it with aplomb.
I have a travel journal that has a section titled “Most memorable event” for each day, and I’m not sure what this says about me as a person, but I wrote “A pigeon pooped on auntie’s head” the day it happened. Before you judge me too harshly, I’d like to point out that I helped her clean it out of her hair as best I could.

I really wanted to experience this when we were in Venice, and on our last day there, we did. The city is a finely tuned machine when it comes to getting the pedestrian walkways set up quickly, and the vendors waste no time in setting up their stands with plastic baggies to put over your shoes. The water made it all the way into St. Mark’s Square, although it was not nearly as deep as it often is. 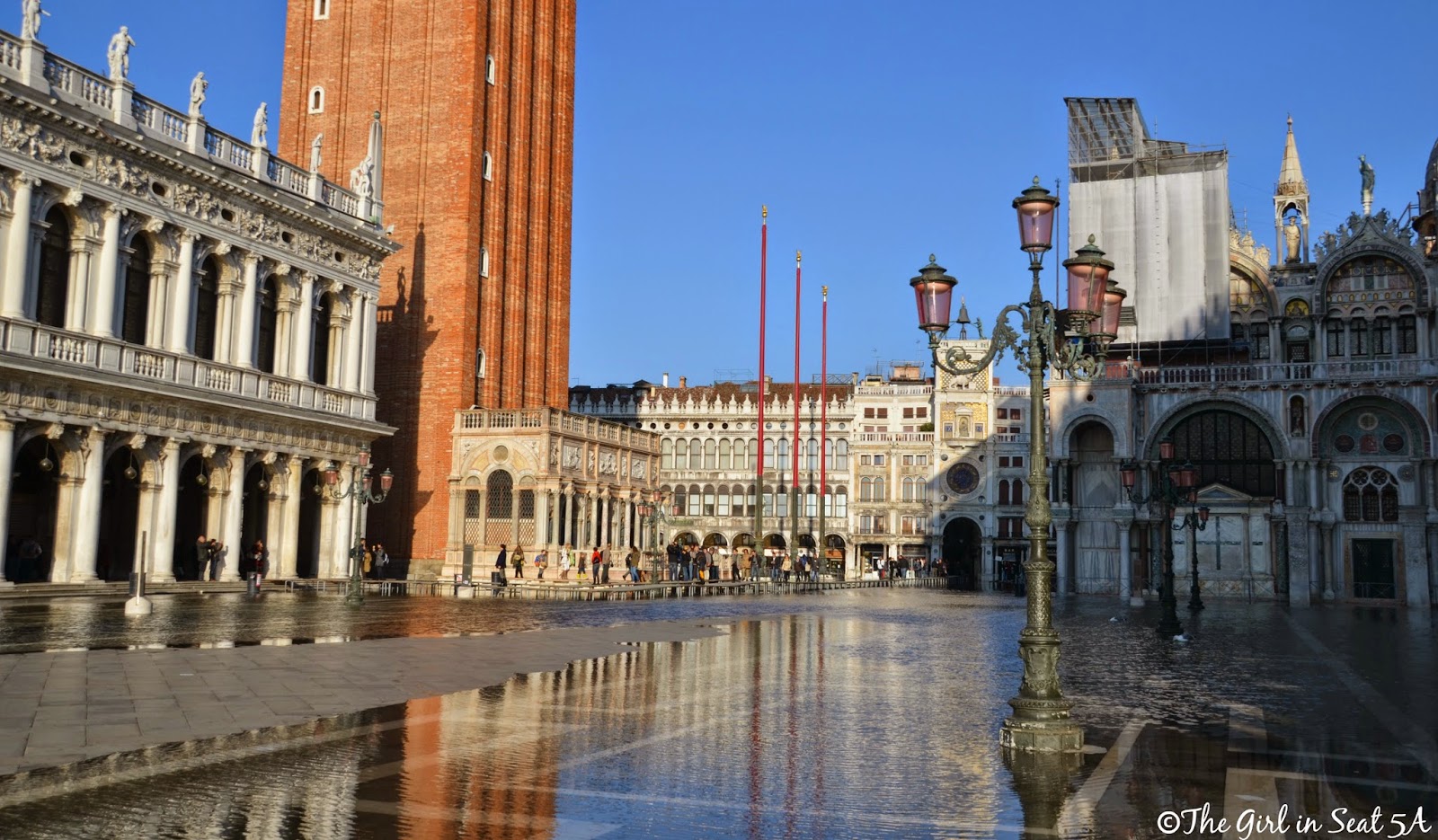 Unfazed, the local merchants went about their business. It receded relatively quickly and everything was back to normal. Still, it was fun to see. 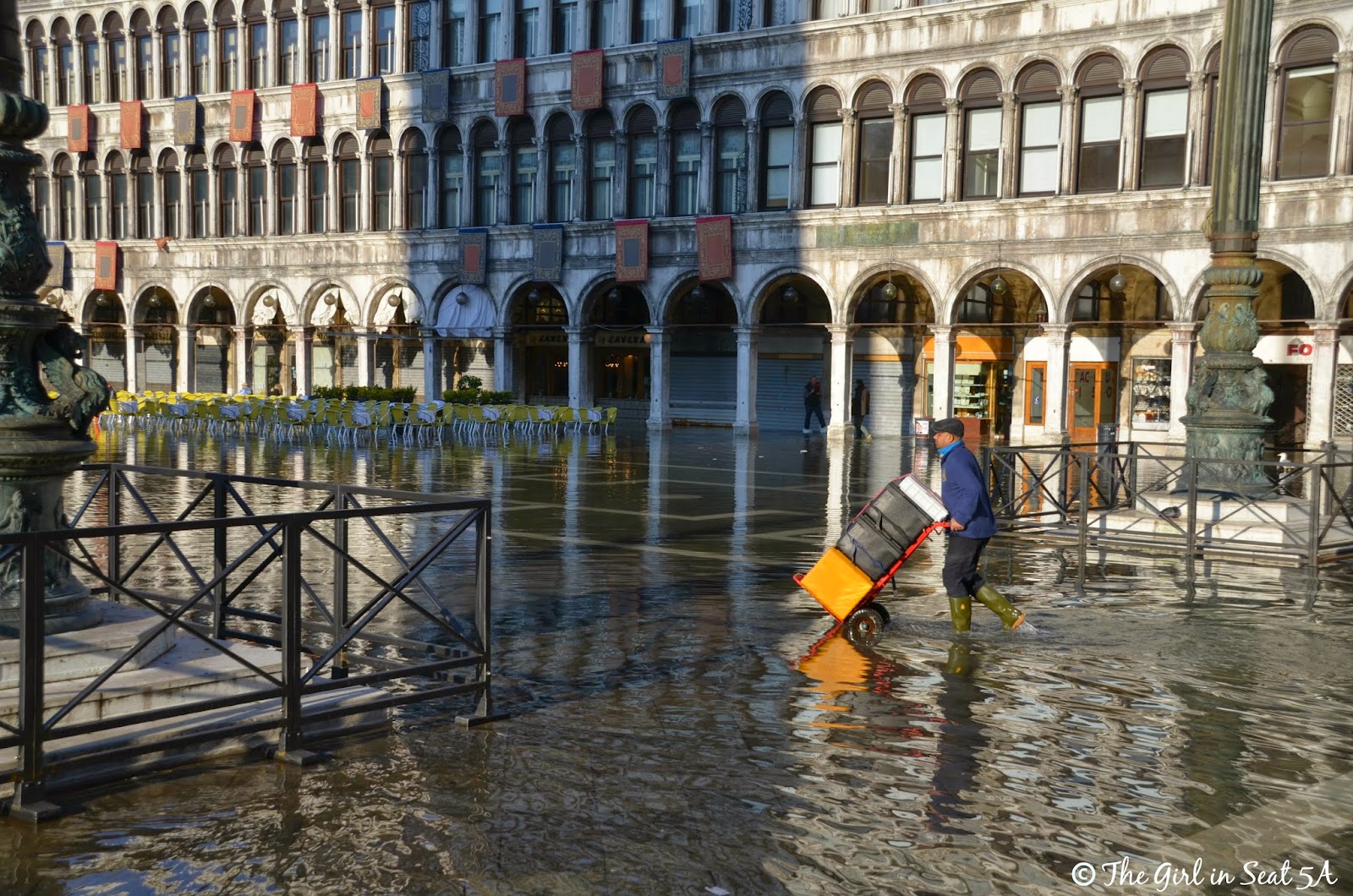 This is an expensive way to get around, but as part of our nighttime visit to St. Mark’s Basilica, Uniworld gave us all an evening cruise along the Grand Canal via water taxis.
Beautiful wooden boats, water taxis can seat up to 10 people, but I think that would be a very tight fit. It was a very unique experience, and if you’ve got the spare change (cost for a trip around the historic center could be as high as 70€), it’s something you should definitely do. Make sure you ask what the fare will be before you get on, and also be aware that getting on and off the boats is kind of tricky if you are elderly or just not comfortable with boats, in general.
Gondola Ride
I know this is such a touristy thing to do, but who cares??? There was no way we were leaving Venice without taking a gondola ride. The official rate for a 40-minute ride for up to four people is 80€, so, again, not cheap.
There are gondoliers everywhere. For the best experience, don’t just pick the first one you see and hop aboard. I would suggest having a short conversation with them and if it seems like they have a good personality, then go for it! The guy we found was great, and very informative. He pointed out things of interest along the way, and although most of them won’t sing unless you pay extra, ours whistled a pretty good rendition of Frank Sinatra’s “My Way” for us as we floated along the Grand Canal toward the Rialto Bridge. 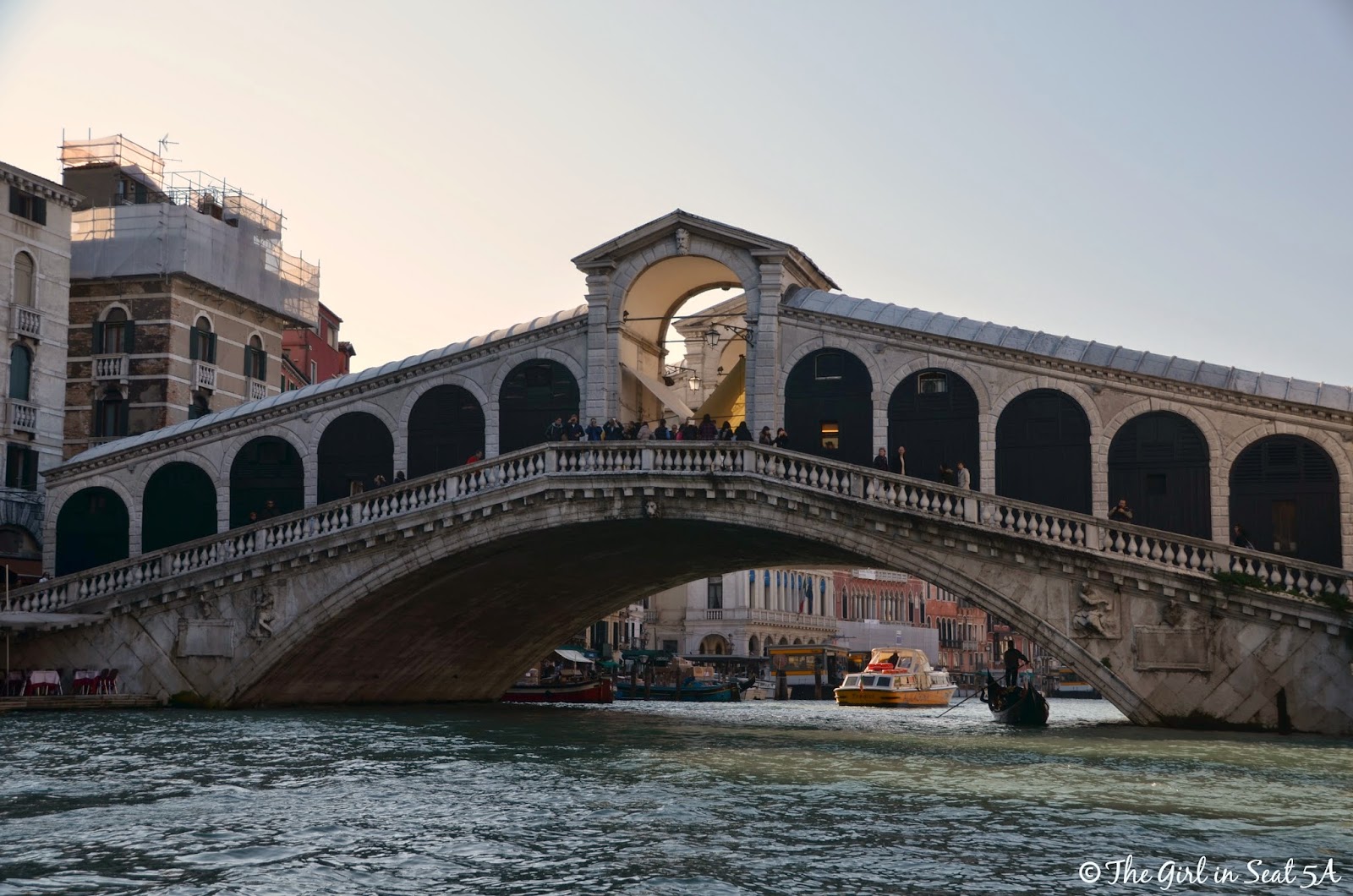 I’ve got to tell you, the ride is pretty nerve-wracking at times. There were bridges we went under where I still have no idea how we made it under without tipping over. But these guys are obviously pros at what they do. 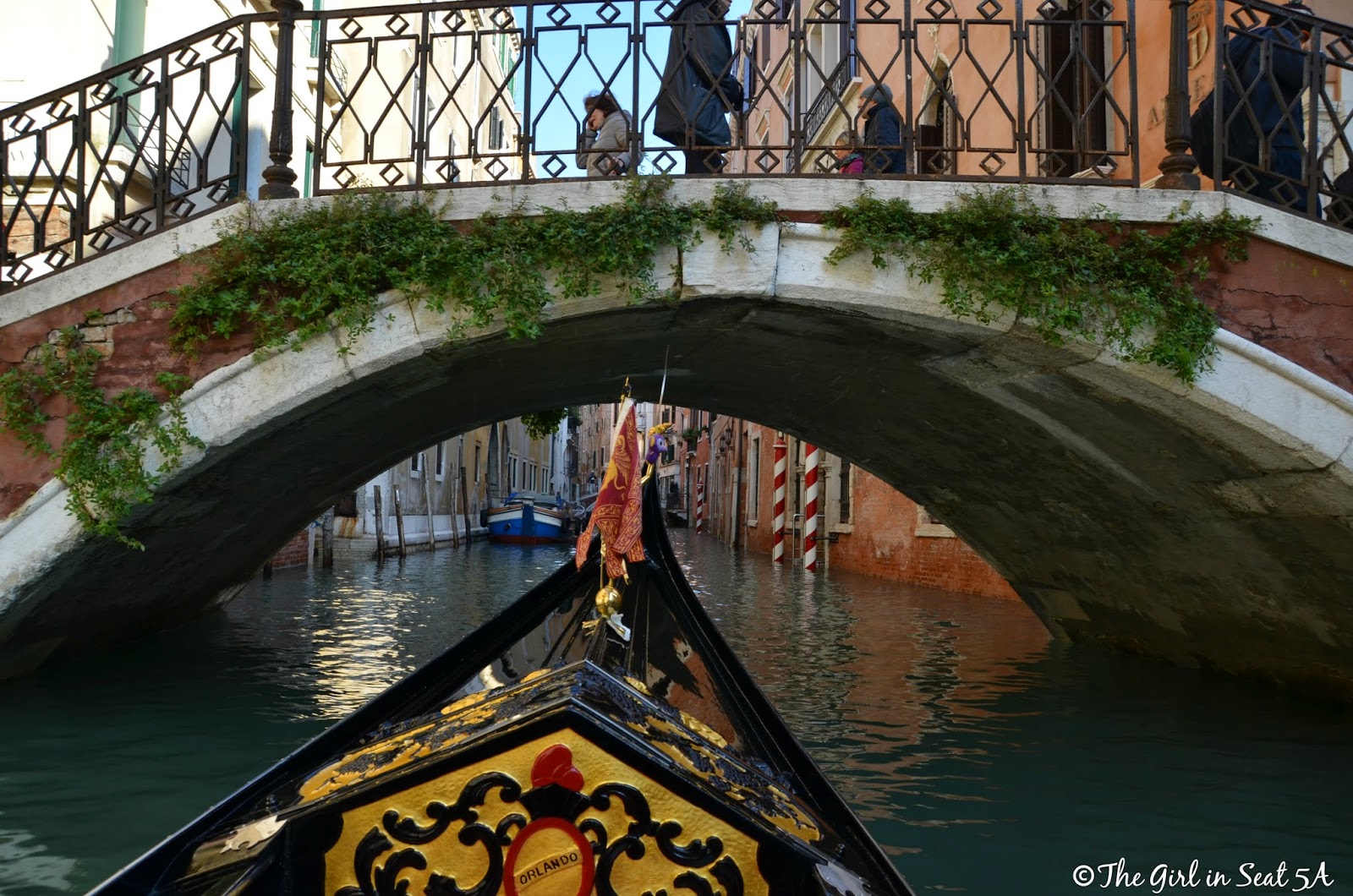 Venice is a very worthwhile destination. Even though I didn’t love it like I thought I would, I enjoyed it very much. If it’s a place that you are considering…just go. You may end up like one of the countless people who fall in love with it and end up going back again and again. Even if you don’t, you will still be glad you went!

Coming up next…our excursions to Padua and Bologna!

« River Cruising Round 2: Venice and The Po River
Padua and Bologna: Sorry, I’m Just Not That Into You »