As I mentioned in my last post, my niece, Katie, and I recently spent the weekend playing tourist in Chicago. Although the weather didn’t totally cooperate (it was way too cold and windy to just stroll around like we wanted to), we had a great time enjoying the sites and eating a lot of really great food! There is always so much to see and do in Chicago – different festivals, performances, etc. all throughout the year – but we focused on some wintertime activities since, well…it’s winter.
One of the things we were really looking forward to was visiting the Christkindlmarket. The market was inspired by the Christkindlesmarkt in Nuremberg, Germany, and has been taking place every year in Chicago since 1996. In 1997, the then-mayor of Chicago, Richard M. Daley, moved the market to Daley Plaza (named for his father, Richard J. Daley, another former mayor) in the heart of downtown Chicago, and it has remained there ever since. 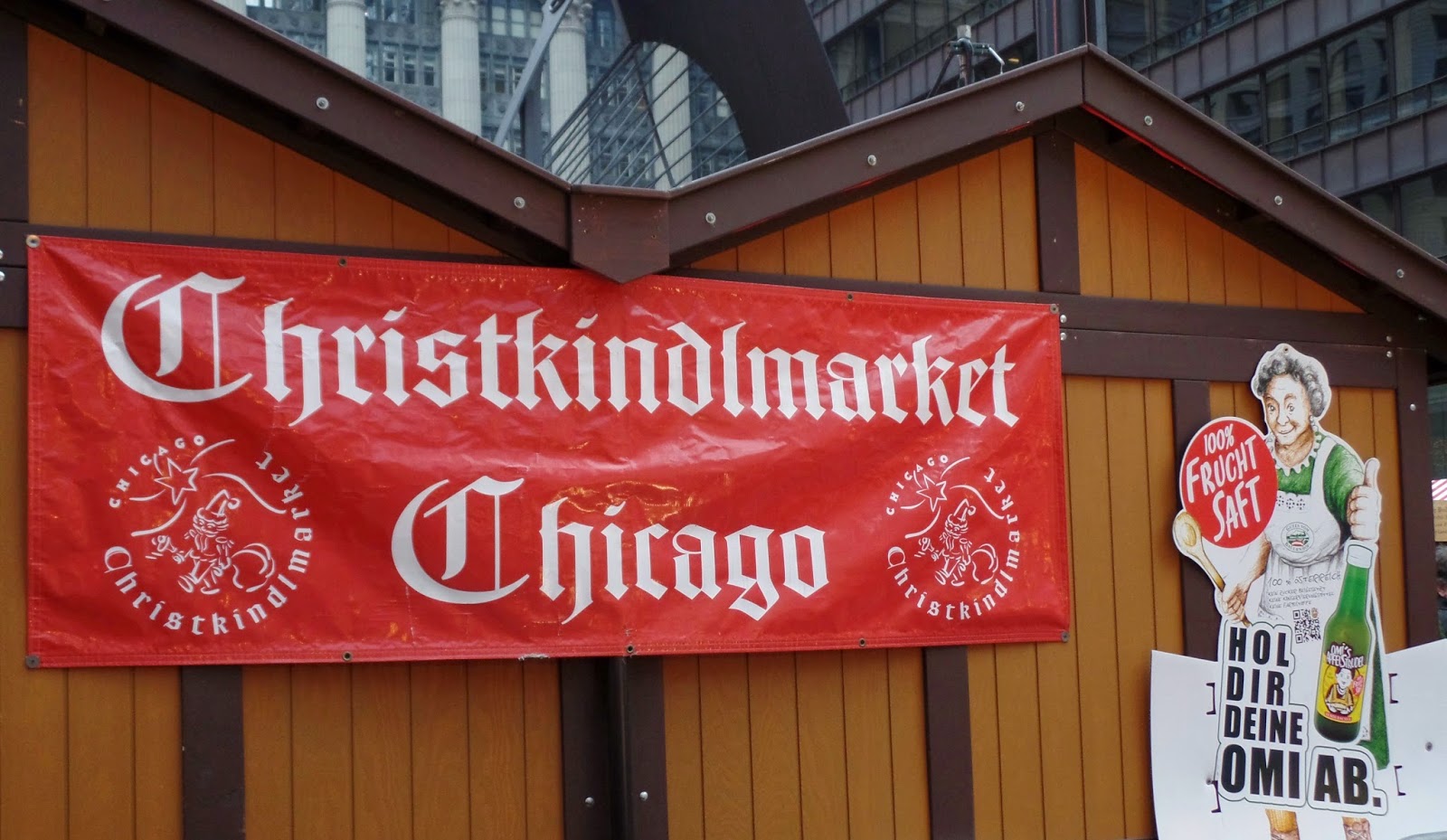 The Market runs from right before Thanksgiving through Christmas Eve and there are about 60 booths offering many different types of German food, drinks, beer steins, Christmas ornaments, etc. Admission is free and it attracts more than a million visitors each year. Unfortunately, I think all of them were there on the day we went. I suppose we should have known better since it was the last Saturday that the market was open, and the place was PACKED.

By the time we got there, we were starving, and so we headed straight for the Bavarian pretzel booth. Considering how crowded it was, the line wasn’t too bad and we only waited for about 10 minutes. 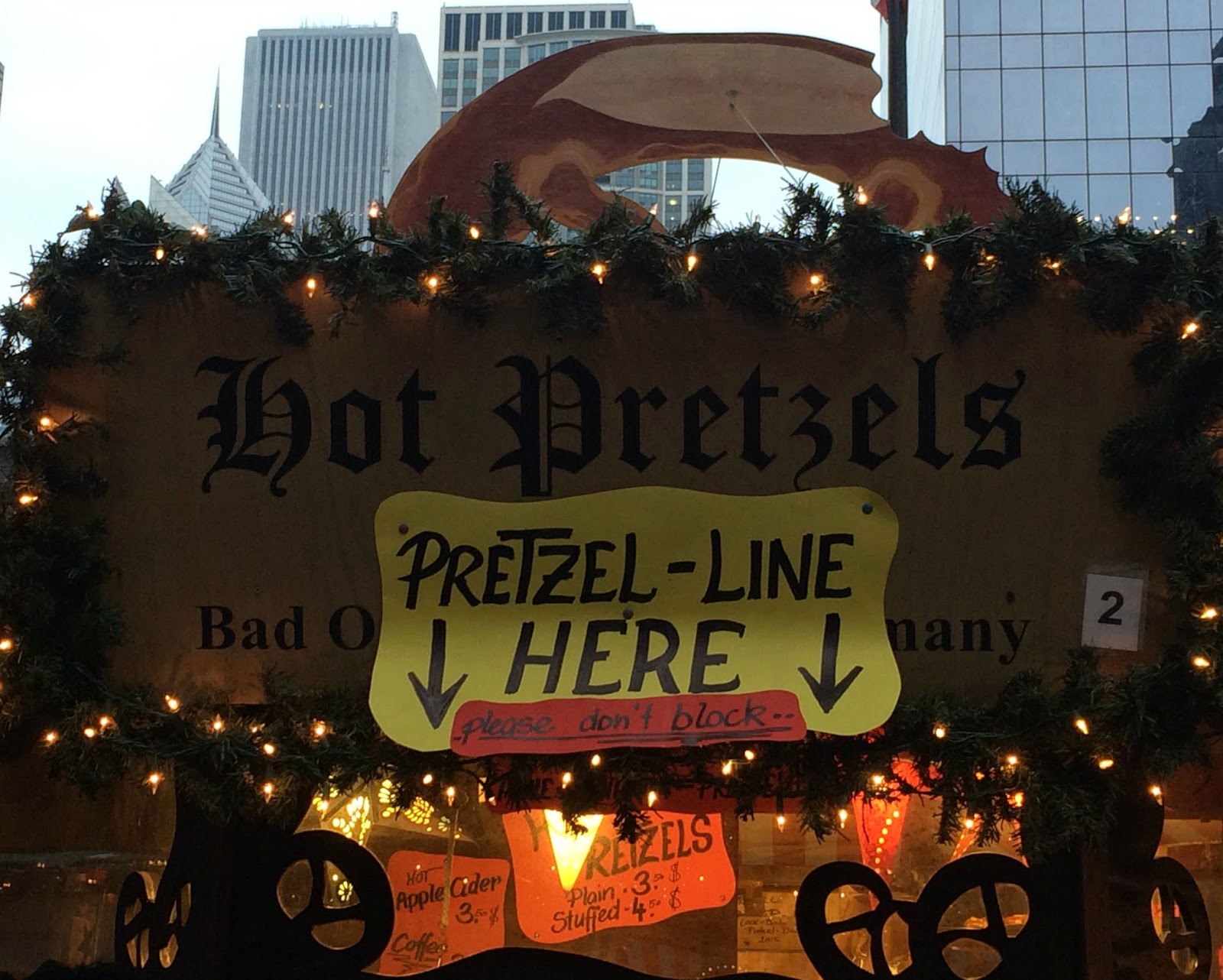 They had four types of pretzels to choose from: plain Bavarian (no filling), grilled cheese (filled with cheddar), pizza (filled with mozzarella and tomato sauce) and cream cheese (no description needed, I assume). 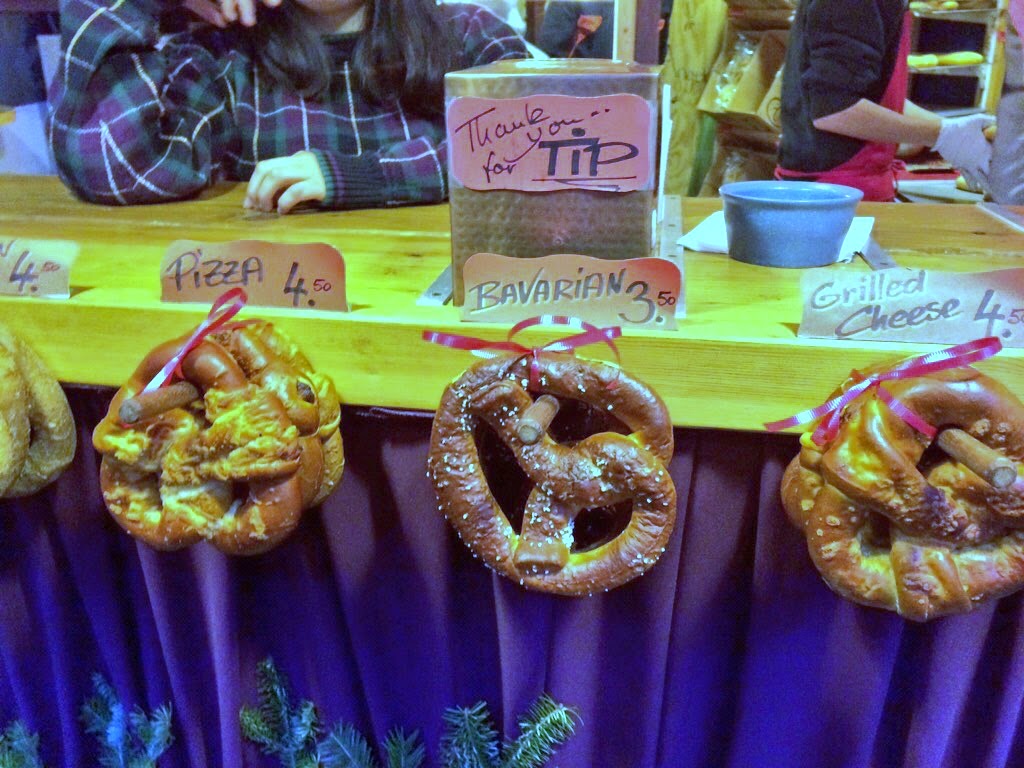 I ordered the grilled cheese and Katie ordered the cream cheese. Since I try to lead by example (and I really wanted to try hers), I let Katie have a bite of mine. They were both absolutely delicious and neither of us could decide which we liked better. If we didn’t have several more food destinations on our list, I wouldn’t have thought twice about getting another pretzel…at $4.50 each, they were well worth it. 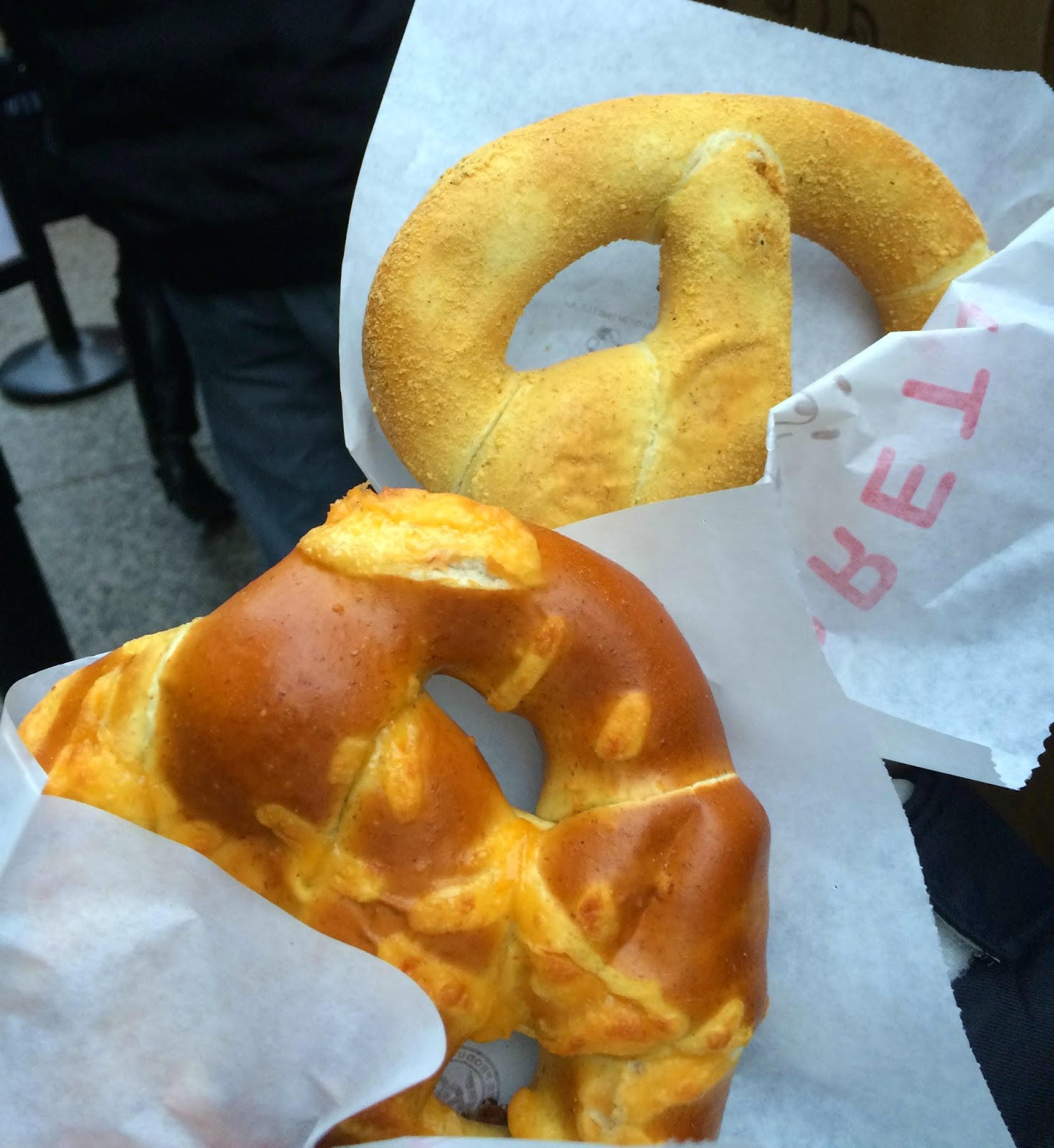 Instead, we both got hot chocolates from Dinkel’s, but were sadly less-than-impressed with them. Still, it was freezing cold outside, so we found a small clearing near the exit and tried to warm up with our drinks.

On a side note, if you plan to visit the market, make sure you have cash on hand since most (if not all) of the places don’t take credit cards. Even though there was a lot more to see, we just weren’t up to the idea of fighting our way through the crowds, so we left and headed to one of my favorite places in the city: Garrett’s Popcorn. 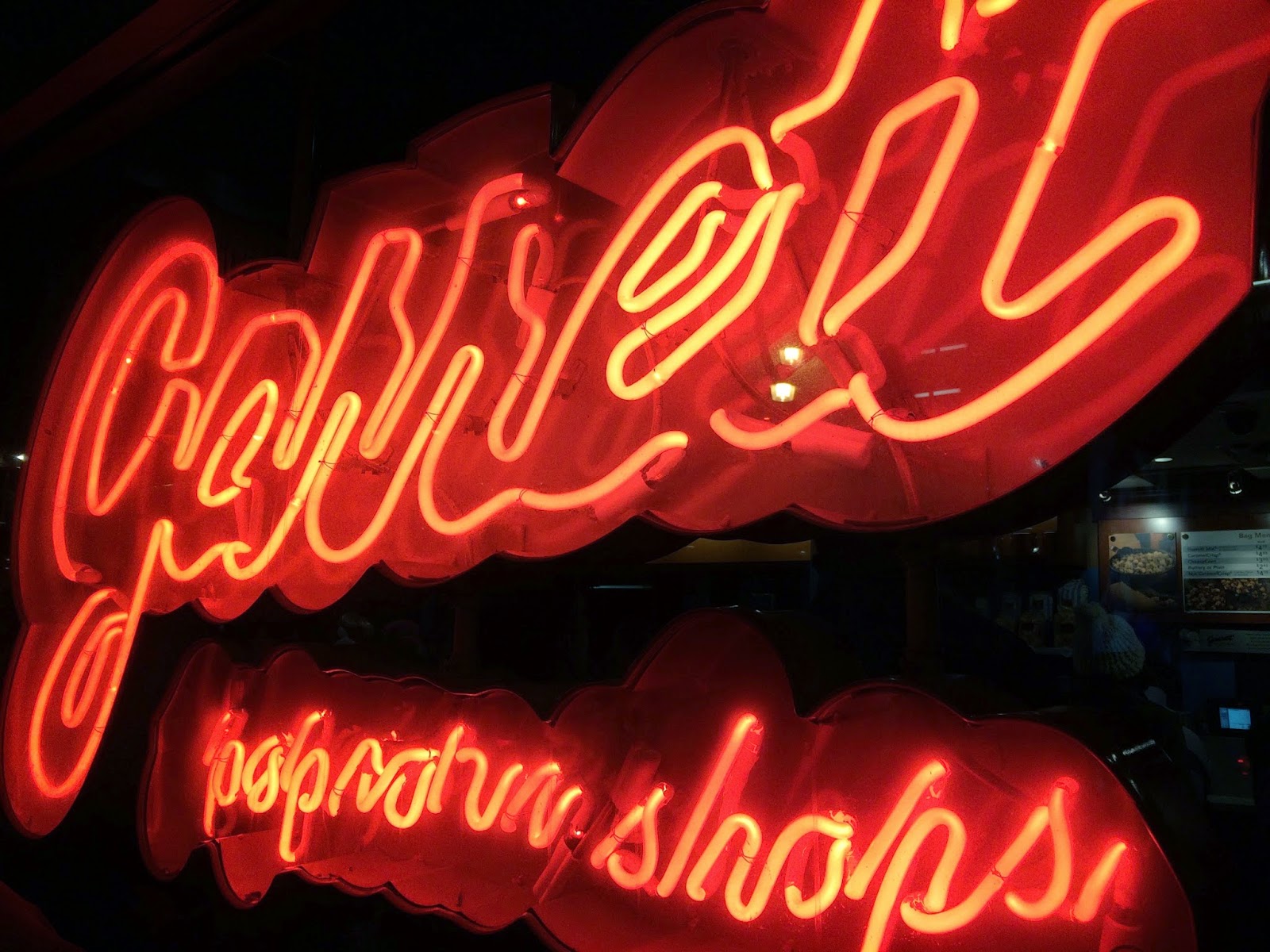 Some of my fondest childhood memories are of going downtown at Christmastime to see the elaborately decorated windows at Marshall Field’s on State Street (that great street…sing along with me, Sinatra fans!).

Alas, what Macy’s does with the windows now is cheap and laughable compared to the way they used to be. Anyway, we would spend what seemed like hours looking at the windows, then head to Garrett’s. I swear, you could smell the fresh caramel and cheese popcorn blocks away. And even though the Macy’s windows don’t measure up to the ones from my childhood, as soon as we got close to Randolph Street (where Garrett’s is located), Katie looked at me and said “Can you smell it??? I can smell it!!” Thankfully, some traditions live on, and I could, indeed, smell it.

Unsurprisingly, there was a line snaking its way out the door and down the street. It took us about 20 minutes to make it in and place our order. We got one bag of Garrett Mix (caramel and cheese – and formerly known as “Chicago Mix”) and one bag of cheese to take home. Prices aren’t bad for the deliciousness you get. 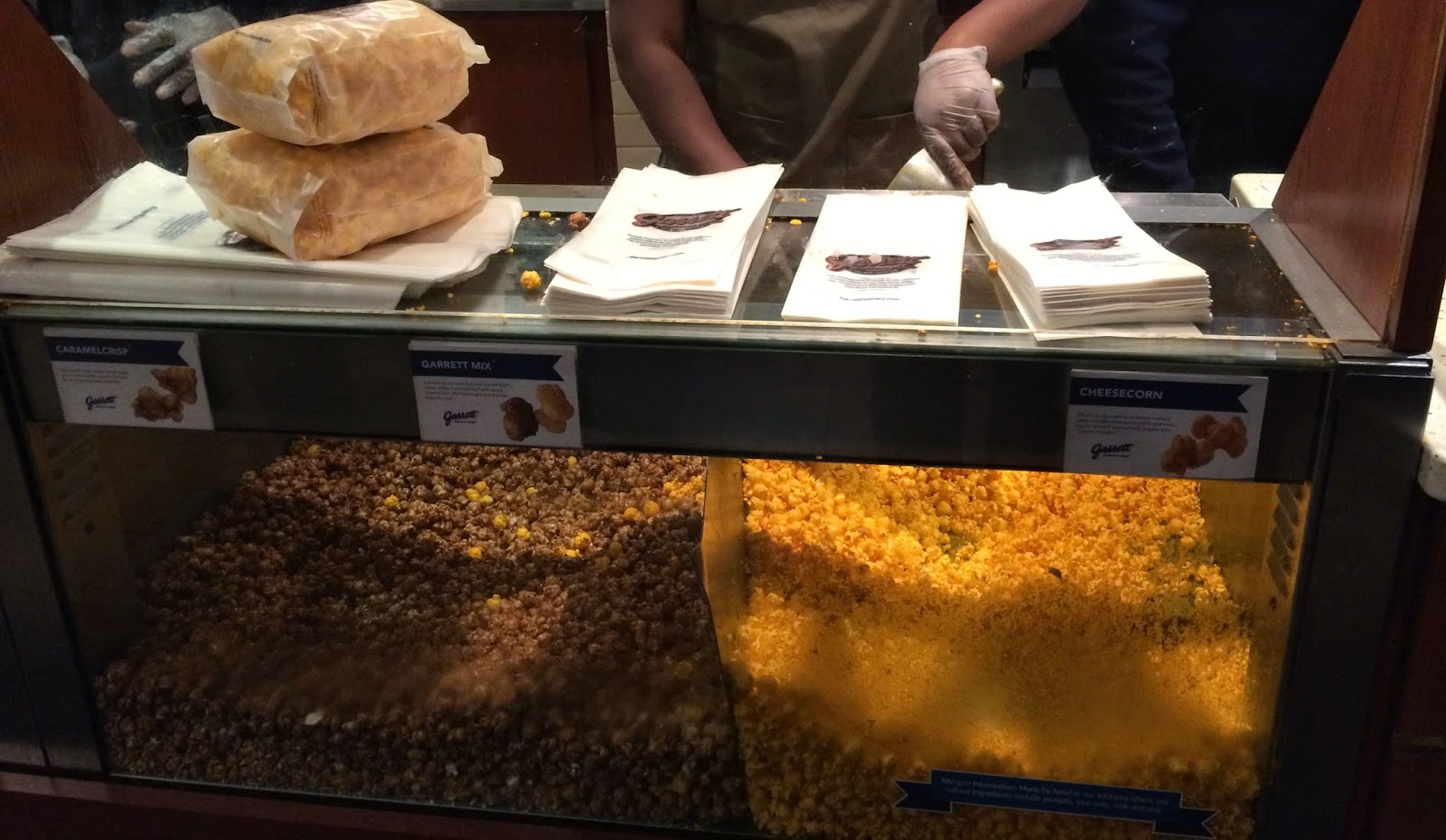 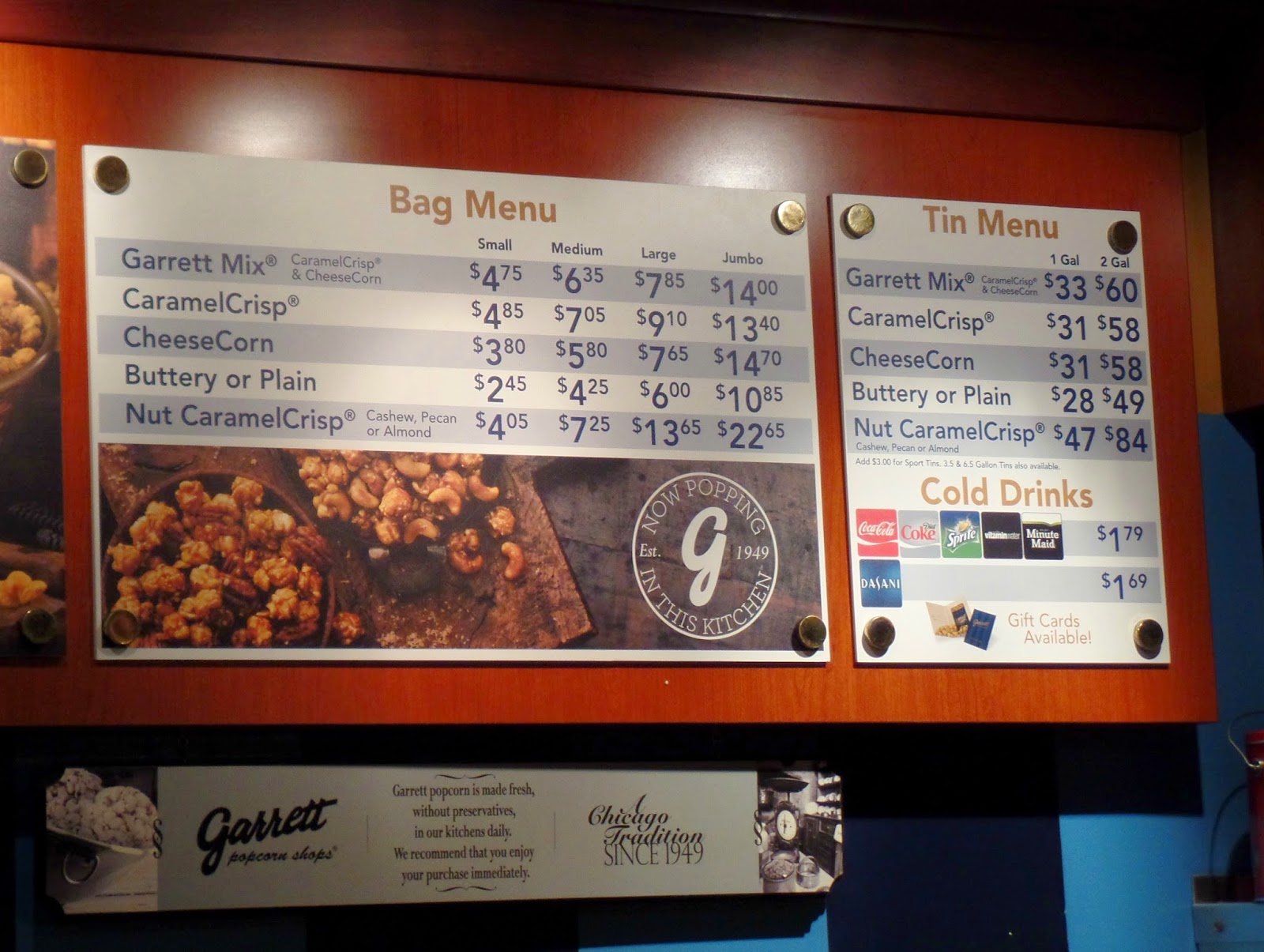 There are quite a few locations around the city, as well as two locations in O’Hare Airport. So if you sadly can’t make it to Chicago for a visit (you should!), but have a connection in O’Hare, you still have a chance to try it.

Next, we walked to the new Maggie Daley Park (named after the wife of former Richard M. Daley) and watched some skaters glide their way around the ice-skating ribbon. 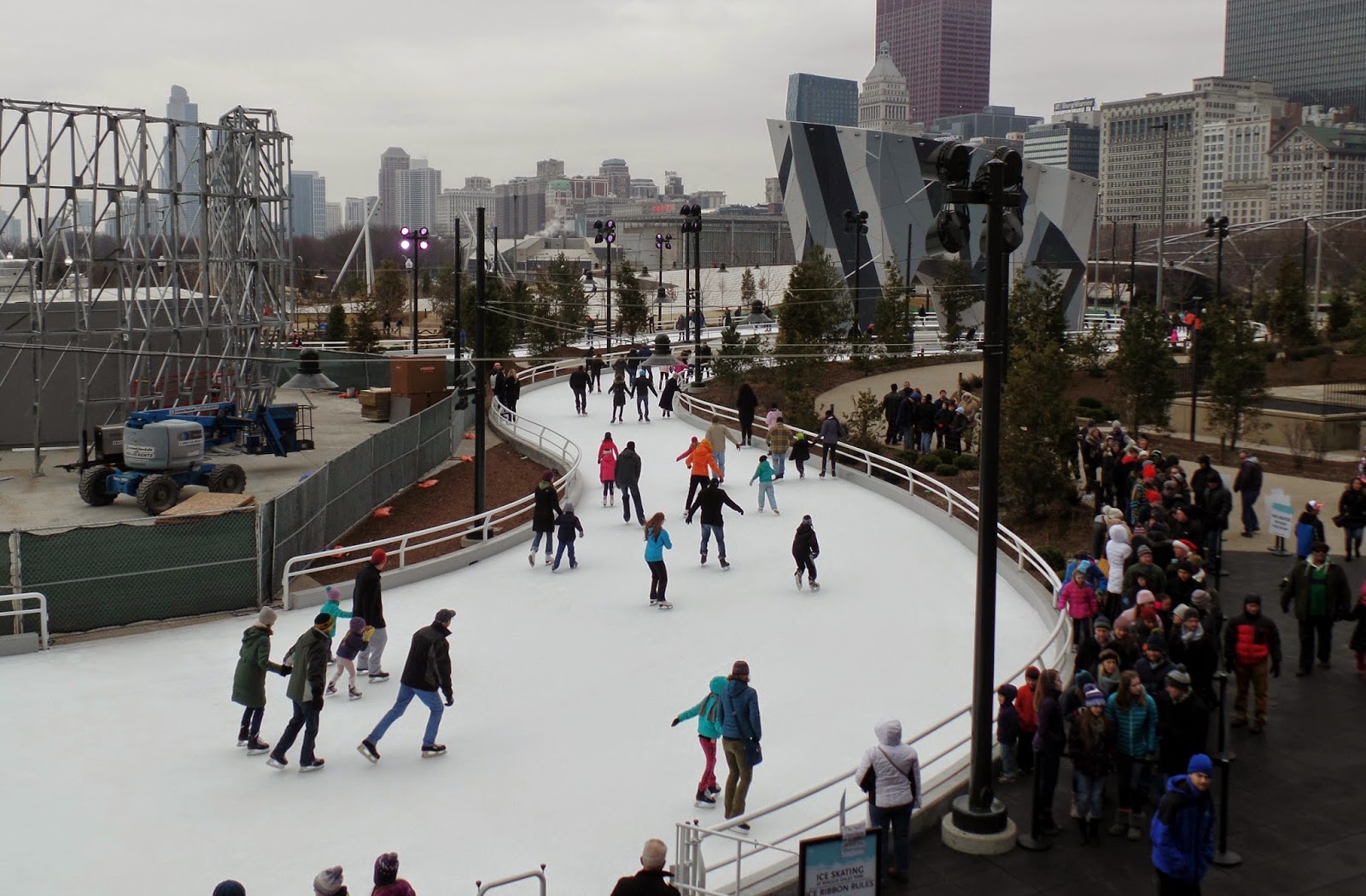 Maggie Daley Park is a recent addition to the city and some parts are still under construction. It sprawls across 20 acres and is sandwiched in between Millennium Park and the lakefront. The skating ribbon just opened a couple of weeks ago, and judging by the amount of people that were in line waiting to get on it, it’s going to be a success. In the summertime, it will be used for roller-skating and other events and exhibitions. The park also has a pretty large playground area with a few awesome-looking slides and other fun stuff for the kiddies. In the spring of 2015, they will be opening a climbing park with different walls, a play garden, an “enchanted forest” with a mirrored maze (I want to go!!!) and tons of other stuff. It sounds like it will be pretty amazing and is yet another reason to put Chicago on your list of places to visit!
In my third, and final, post about our Chicago weekend (coming on Sunday), I’ll tell you about where we had dinner, where we had breakfast (yes, we ate a lot!), our visit to Millennium Park, the Art Institute, and also share my thoughts on the Fairmont Hotel.

I’d also like to take this opportunity to wish you all a very happy new year! May 2015 be a wonderful, adventure-filled year for everyone!