I love Tuscany. The rolling hills of green, the lush vineyards that seem to go on for miles, olive and cypress trees dotted across the countryside, charming towns, mouthwatering food and, of course, some of the best wine you will ever drink. Tuscany is a feast for all of your senses.

During one of our most recent trips to Rome, we went on a fantastic day trip that took us to three Tuscan towns in the Val d’Orcia region: Montepulciano, Montalcino and Pienza. We booked the 12 hour organized tour through Dark Rome Tours, and the experience was one that we will never forget. 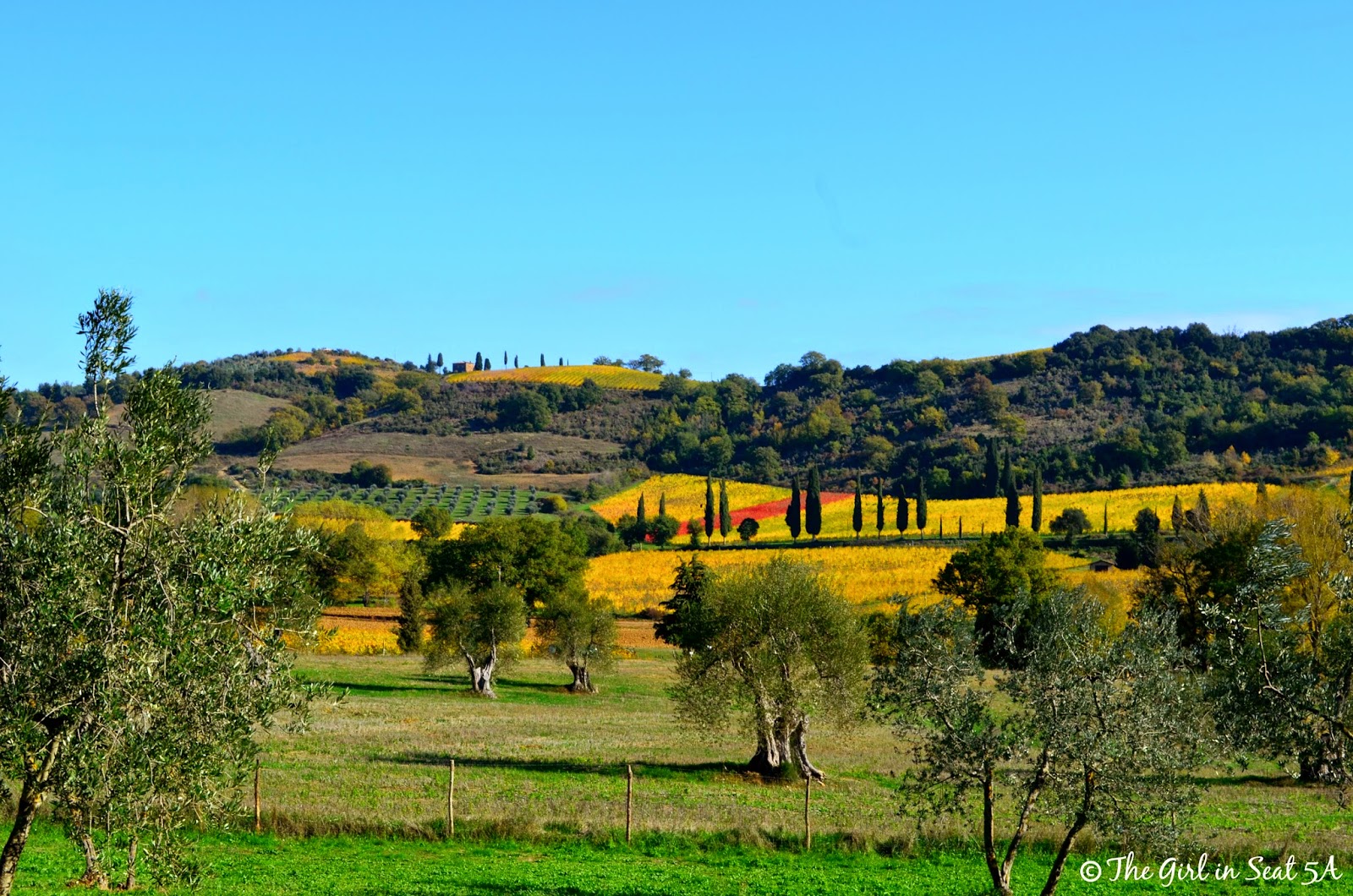 The group, which was made up of about 25 people (mostly Americans, middle-aged and up, with some exceptions on both counts), met by the fountain in Piazza del Popolo for an early morning departure.

The bus we were on was very comfortable and there was plenty of room. There was no restroom onboard, but we did make a stop about halfway through the two and a half hour trip to our first destination: the gorgeous hill town of Montepulciano. 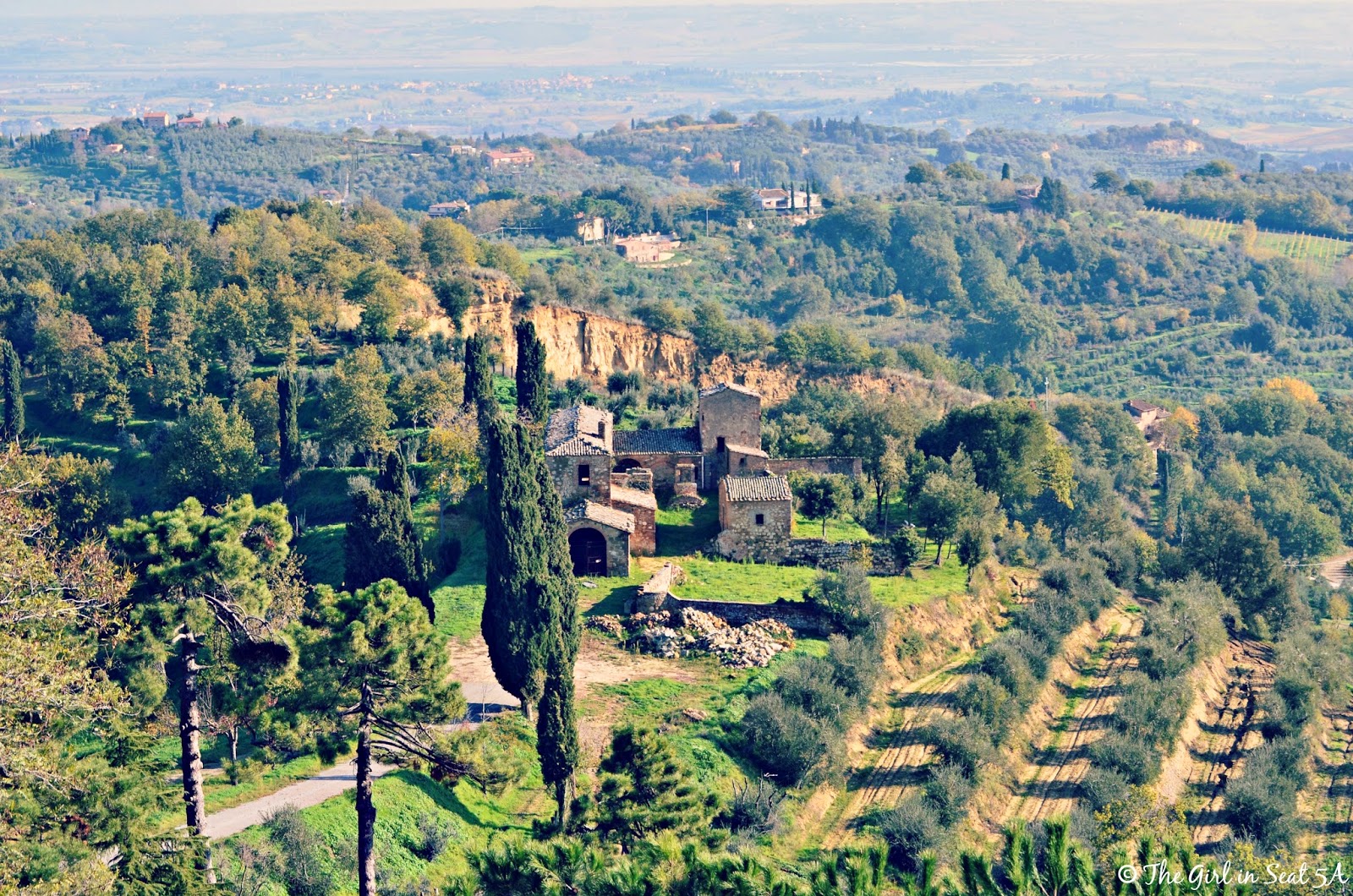 Perched 2,000 feet high on a limestone ridge, recent findings show evidence of settlements in the area from as early as the 4th or 3rd centuries B.C. Known for its “pici” pasta (delish!) and Vino Nobile wine (double delish!), Montepulciano is a relatively compact and hilly, town with winding streets, charming homes and gorgeous, sweeping vistas. 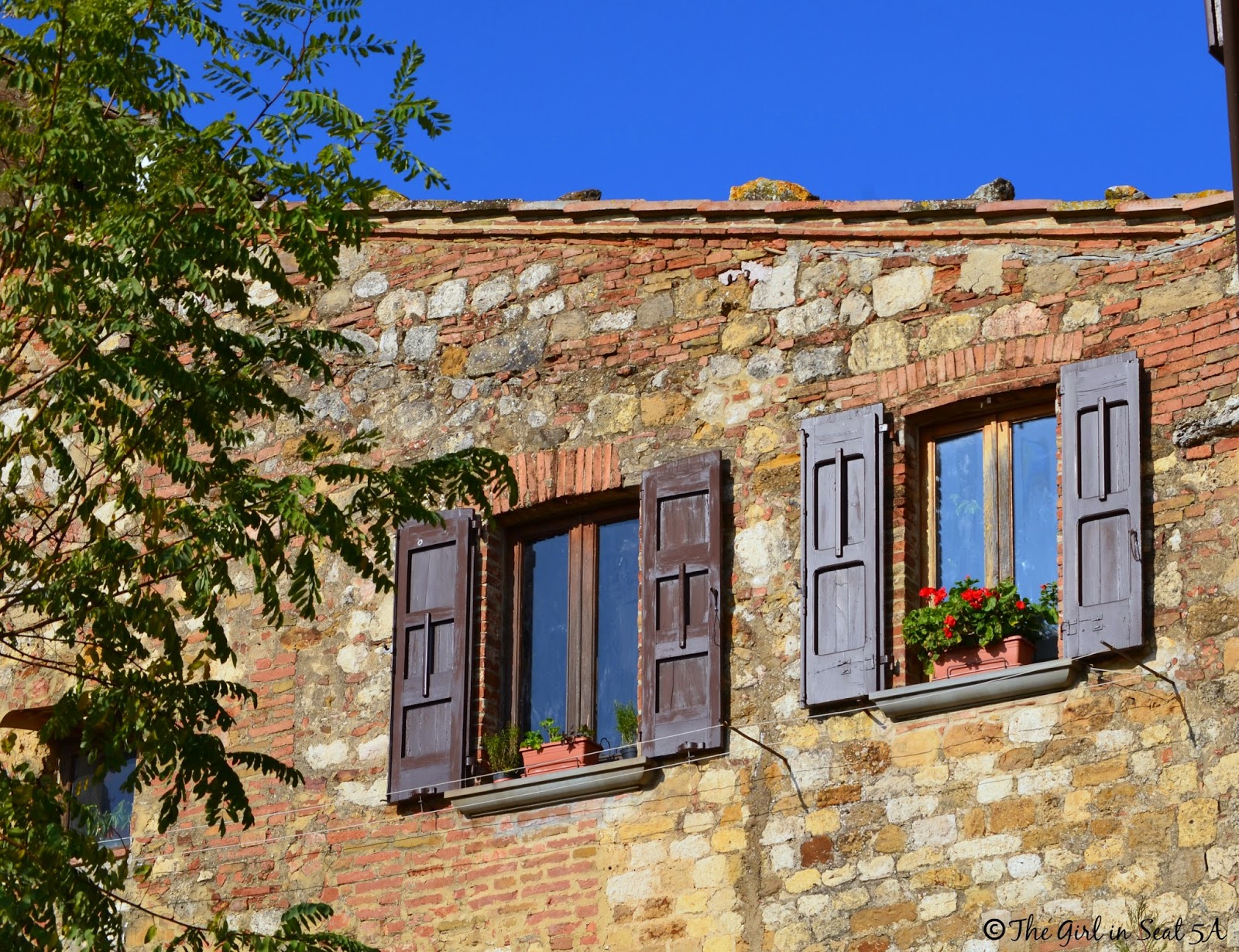 We had a local guide show us the highlights, which included a visit to the Cathedral of Santa Maria Assunta, built between 1594 and 1680. The facade of the Cathedral is covered with exposed brick and isn’t much to look at. But do take the time to go inside and take a peek at the beautiful Assumption of the Virgin triptych, which was painted by Taddeo di Bartolo in 1401. 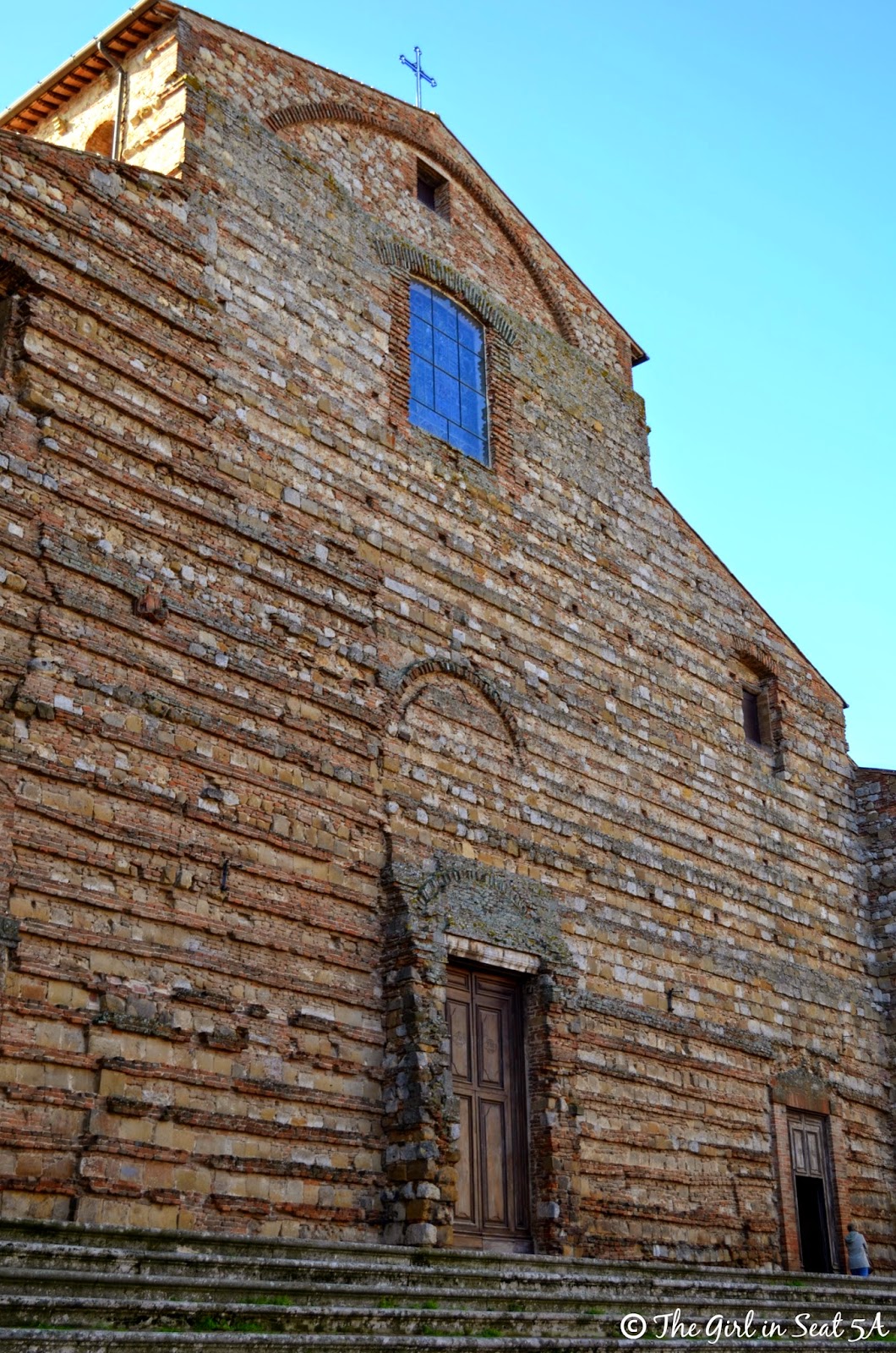 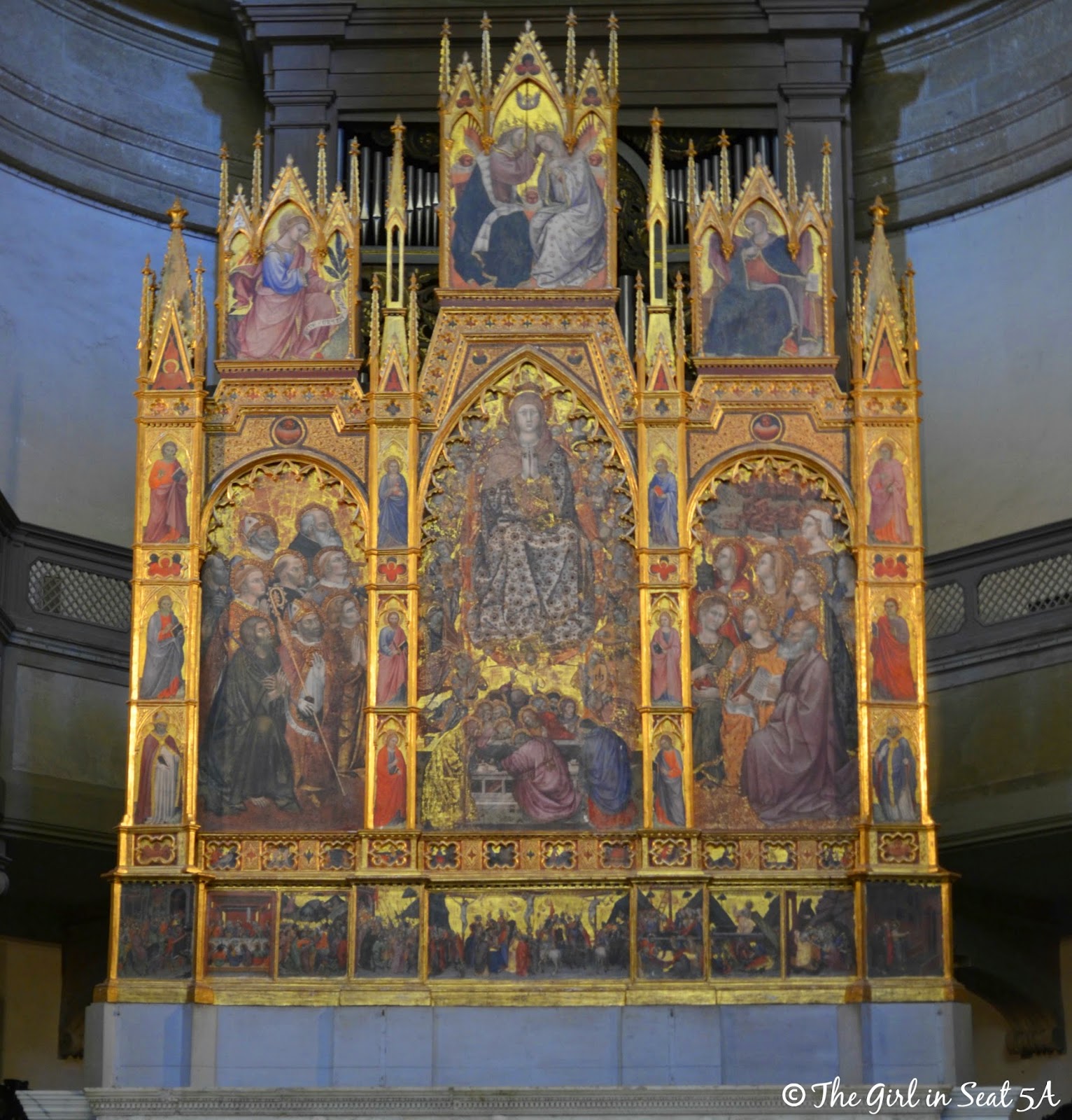 We had a short time to stop in a few shops, then it was back to the bus and onward to Montalcino, where our first stop was Sant’Antimo Abbey. Dating from the 12th century, the Romanesque Abbey is surrounded by fields, vineyards and olive trees. 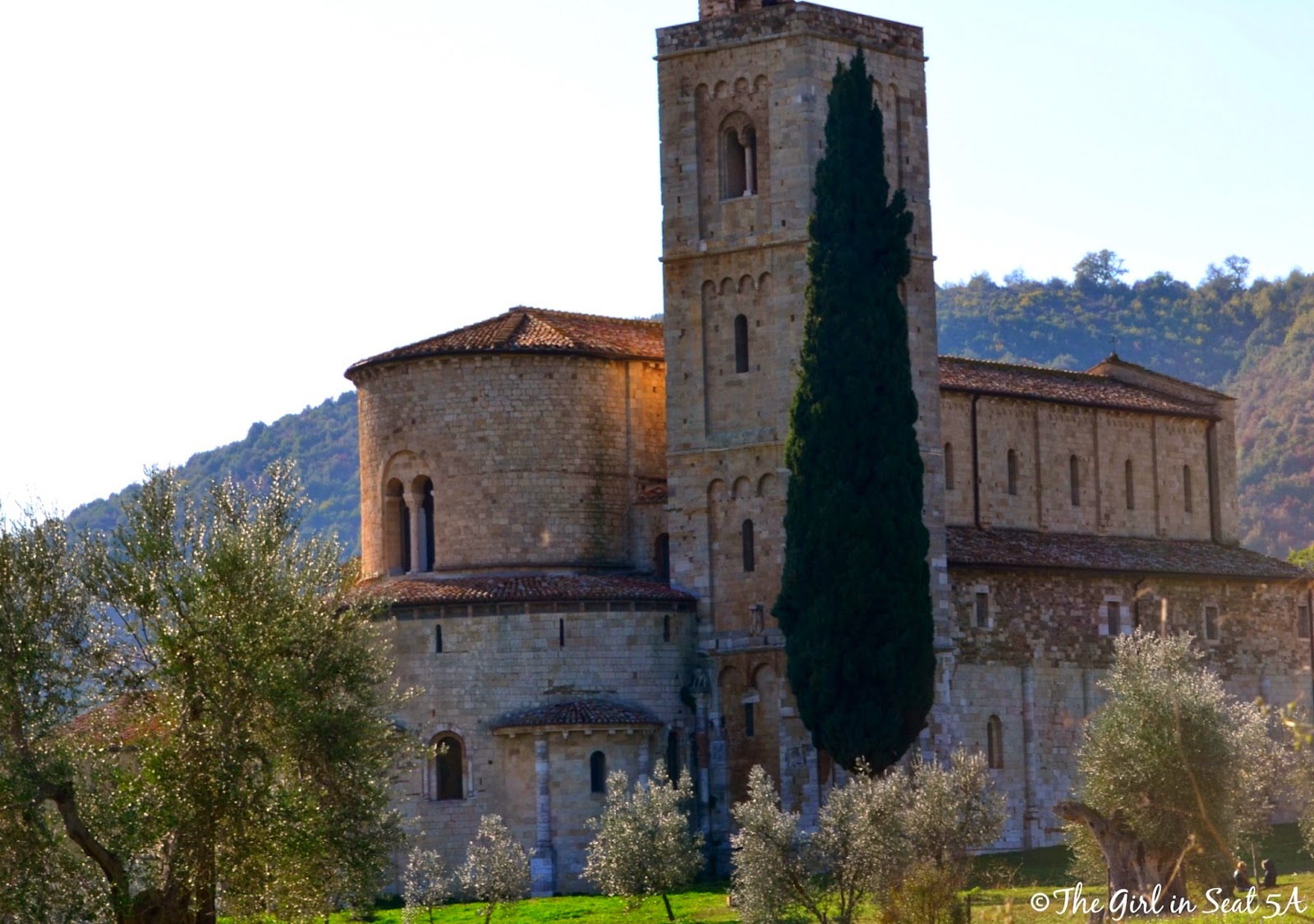 The inside of the Abbey is a little on the plain side, but the real treat is if you are there at the right time to hear the Gregorian Monks perform their chants…a tradition that has been carried on for centuries. 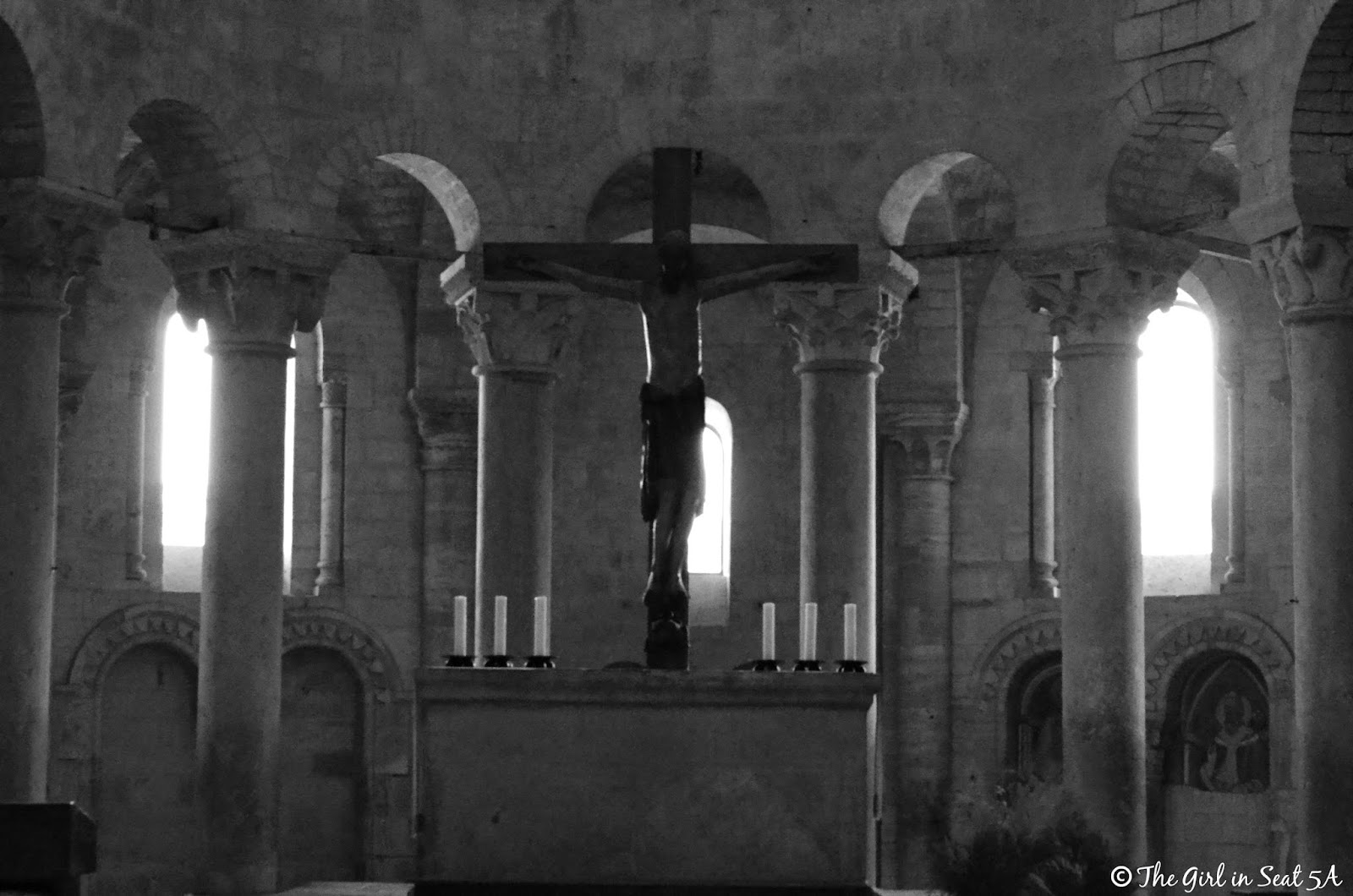 After spending some time at the Abbey, we went on to Poggio Il Castellare, a local vineyard where we had a delicious lunch and wine tasting – which included their award-winning Brunello di Montalcino. 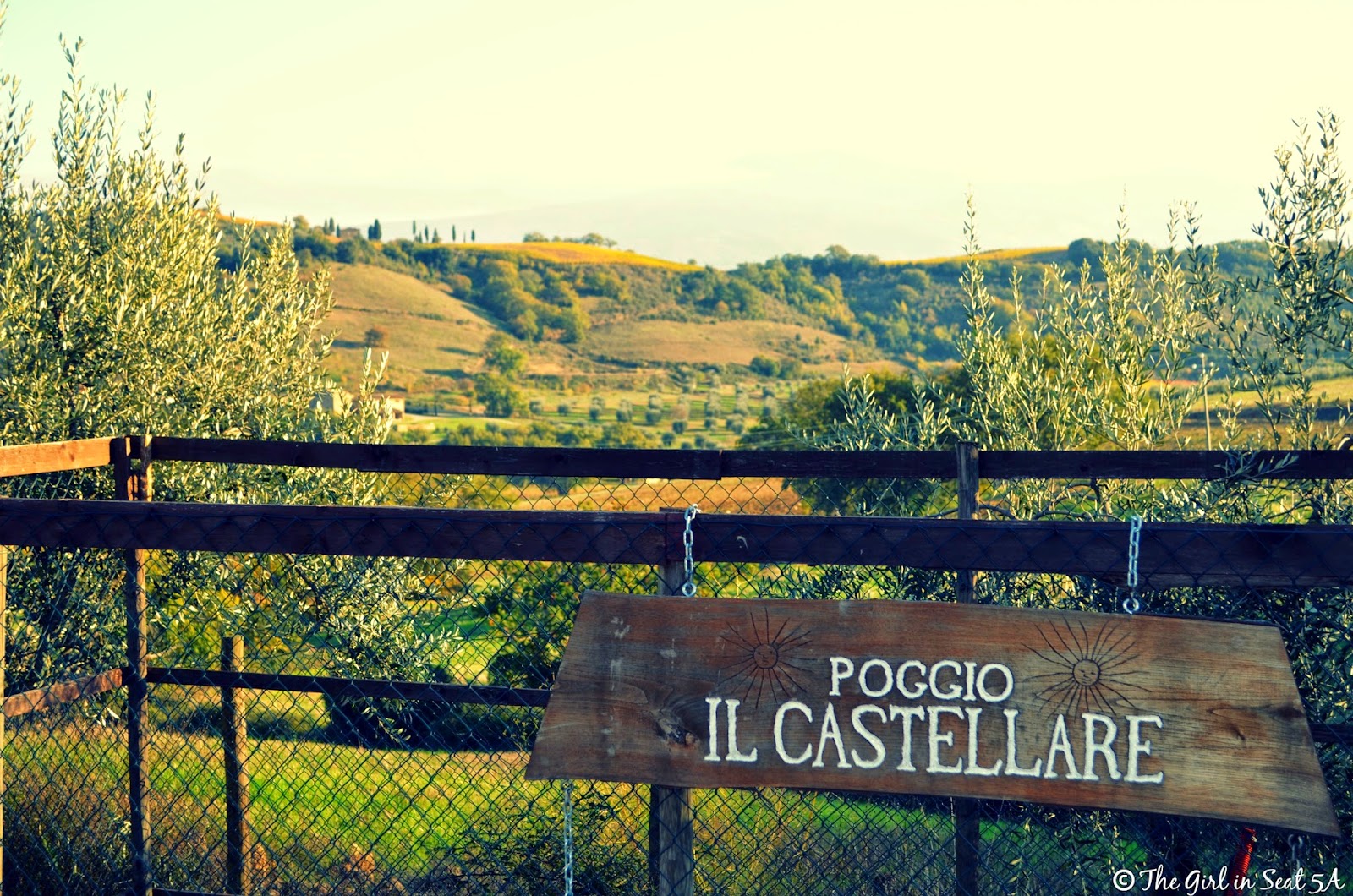 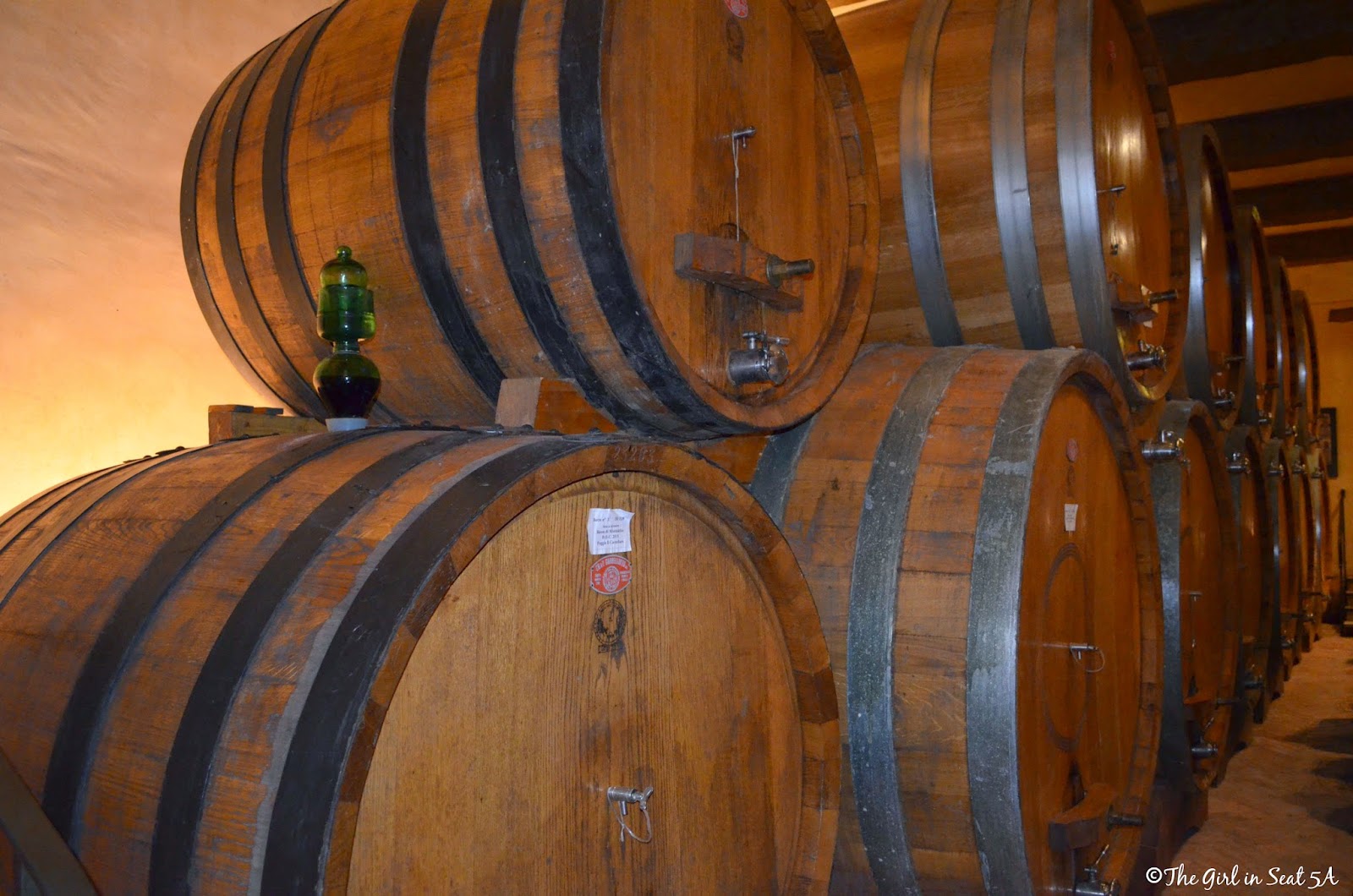 After lunch, we had some time to wander around the vineyard, which was beautiful. Then, back onto the bus for our last stop of the day: Pienza.

Known as the City of Pius, Pienza is utterly charming with winding streets and gorgeous views across the valley. Upon being named Pope in 1458, Pius began to work with an architect to completely redesign the small town from which he came. The reconstruction was complete in 1462, and Pienza is now a UNESCO World Heritage site. 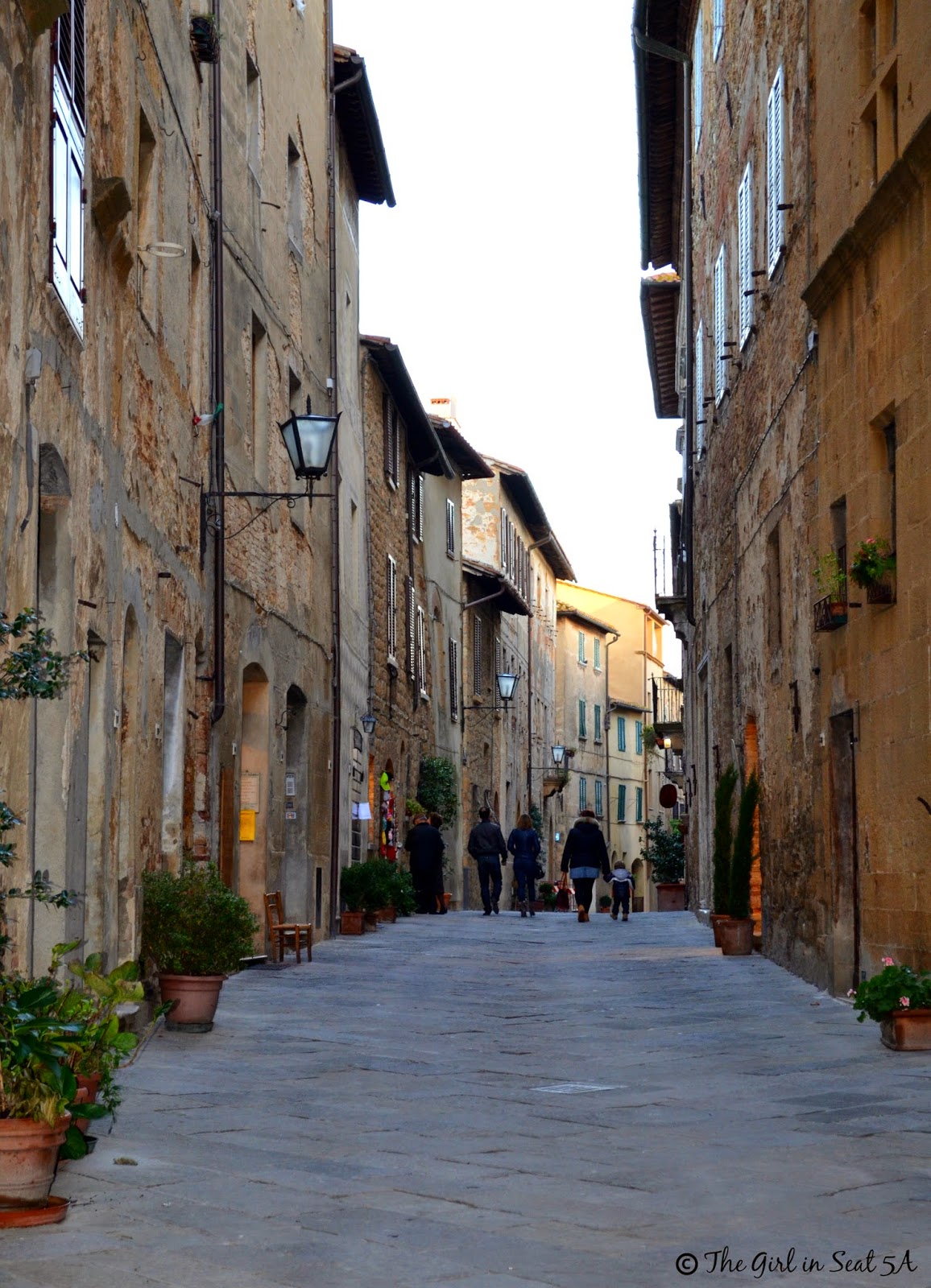 The streets are filled with artisan shops, and you will not want to leave without getting some of Pienza’s famous pecorino cheese. I still remember being smacked in the face with the deliciously pungent smell of cheese as we walked into the shop below: 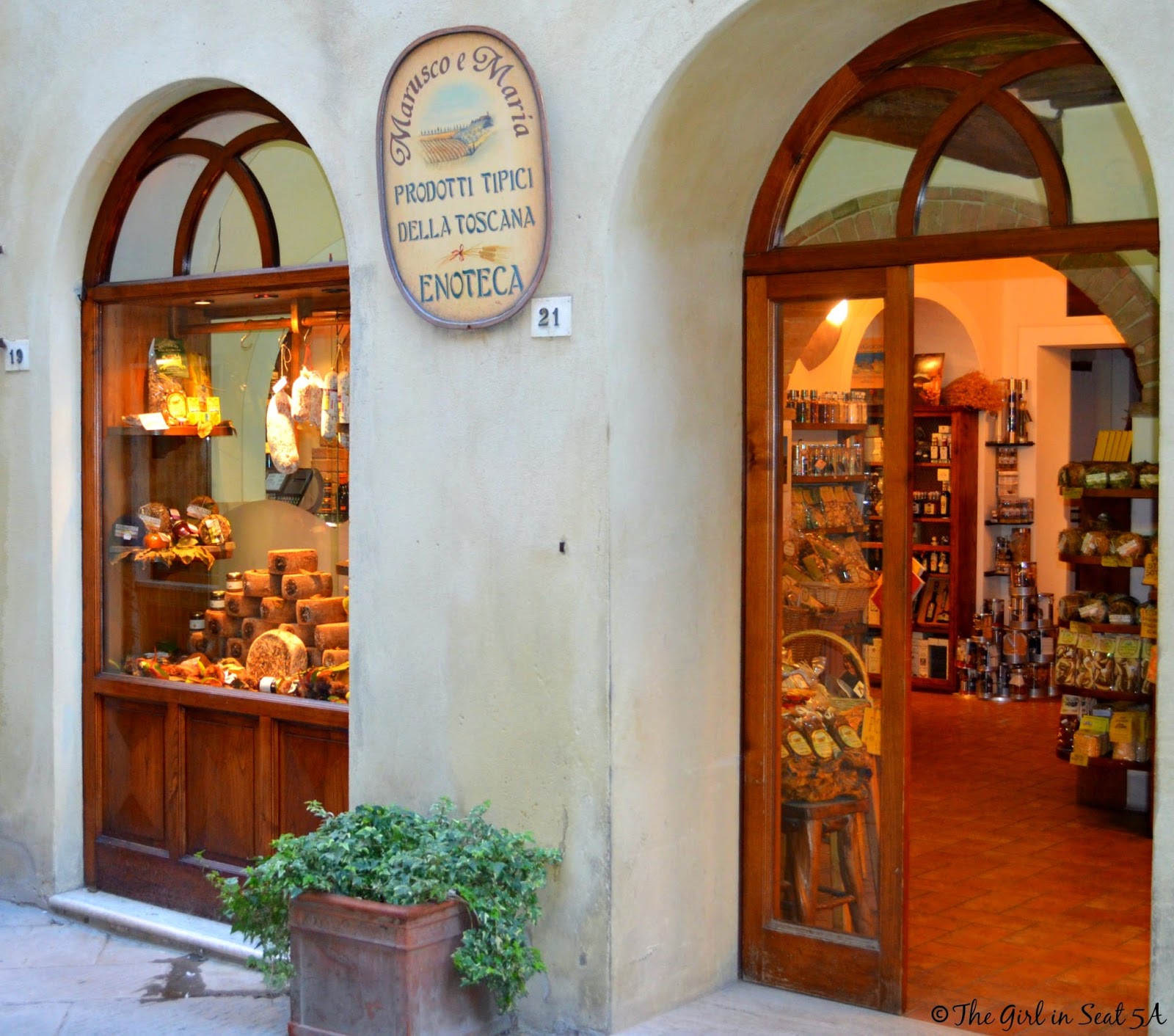 Luckily, the shop owner was all to happy the vacuum seal the cheese for us, so we each got a half of a wheel of the pecorino to take back home. It was absolutely sublime. 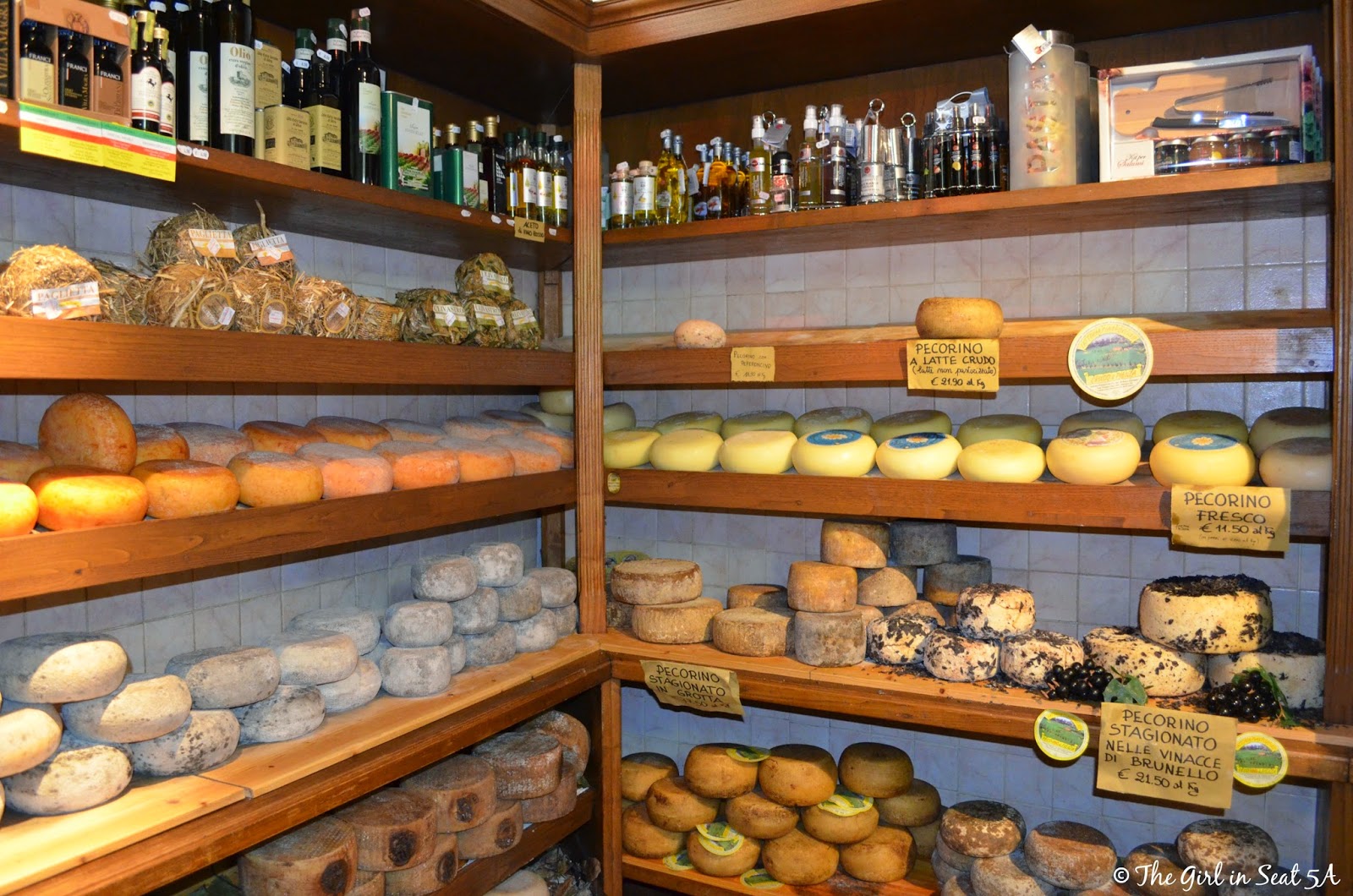 We spent a little more time wandering around, and then walked to the edge of town to watch the sun set over the valley. 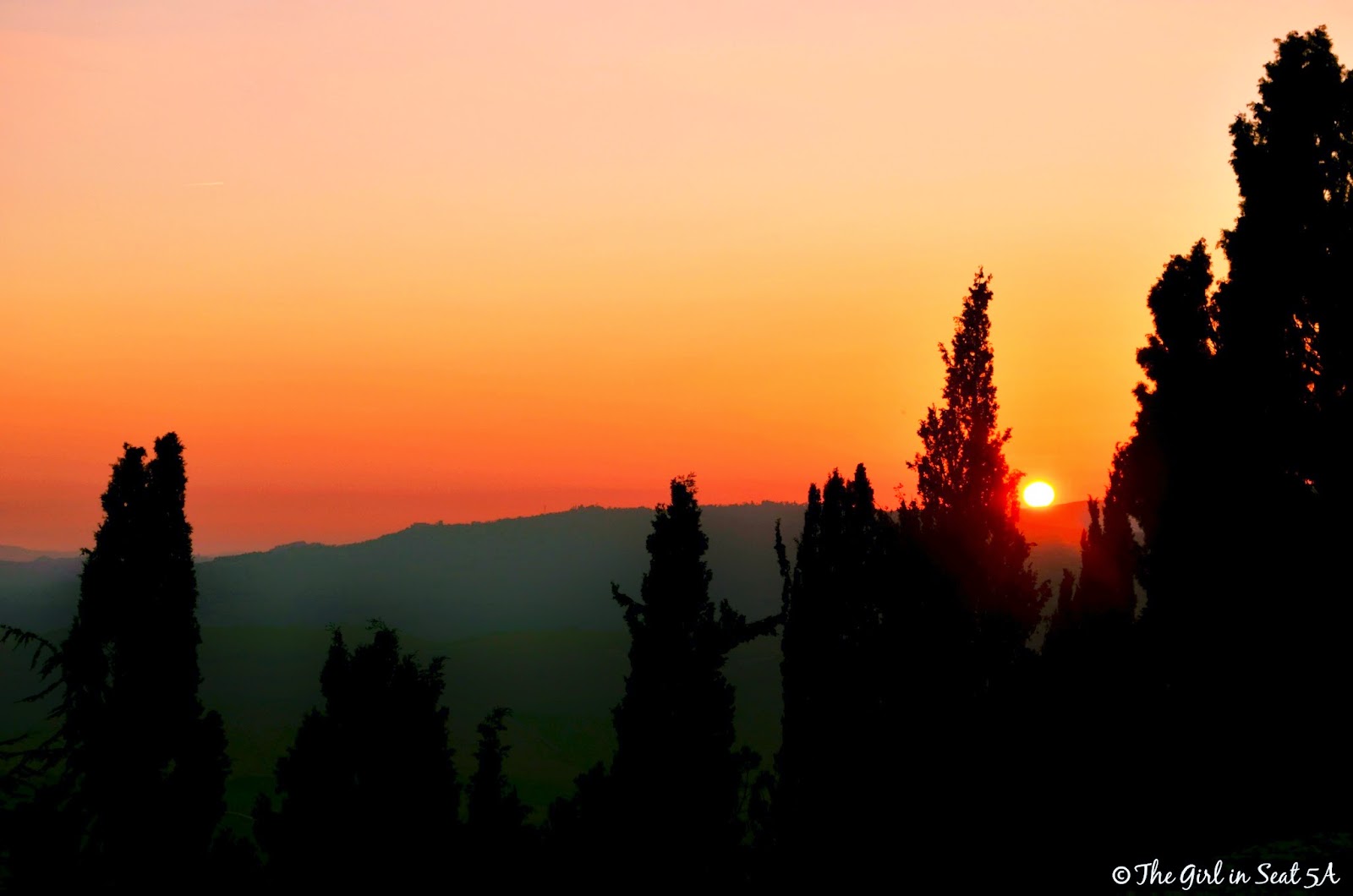 I wished we had more time in Pienza, but all too soon it was time for us to get on the bus and head back to Rome.

There are two things I would like to give a word of caution on to anyone considering either taking this trip or visiting the towns on your own. First, once you are off the autostrada, the drive goes up in the hills and gets very winding. If you are prone to car sickness, take precautions. One woman got sick on the bus, and I was feeling a little nauseous as well. Second, going into Montepulciano requires a lot of uphill walking, which could prove challenging to older folks or those who have mobility issues.

Neither of these things should dissuade you, because the trip was really amazing and, in my opinion, very low cost for what you get. Our guide was an expat from the U.S., and was very knowledgeable and funny. He made the drive go by quickly with his stories and interesting facts. I would highly recommend this tour to anyone looking to take a day trip from Rome.

Have any of you taken this tour? Did you have as much fun as we did? And, more importantly, how much wine and cheese did you come back with?